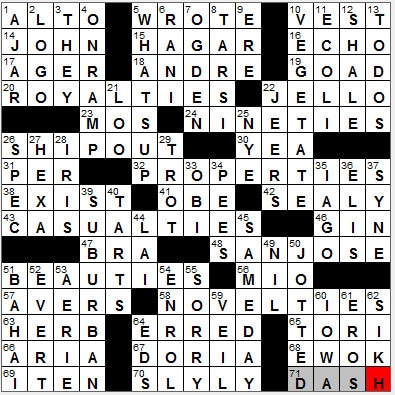 CROSSWORD SETTER:Tom Pepper
THEME: Neckwear … each of the theme answers is a word ending with the suffix “-TIES” and is clued as two words, the second being “TIES”:

20A. Neckwear for princes? : ROYAL TIES (royalties)
24A. Neckwear for a full baseball team? : NINE TIES (nineties)
32A. Neckwear just right for the occasion? : PROPER TIES (properties)
43A. Neckwear for informal occasions? : CASUAL TIES (casualties)
51A. Neckwear for boyfriends? : BEAU TIES (beauties)
58A. Neckwear in a work of fiction? : NOVEL TIES (novelties)

Today’s Wiki-est, Amazonian Googlies
Across
1. Woman in a choir : ALTO
In choral music, an alto is the second-highest voice in a four-part chorus made up of soprano, contr(alto), tenor and bass. The word “alto” describes the vocal range, that of the deepest female singing-voice, whereas the term “contralto” describes more than just the alto range, but also its quality and timbre. An adult male’s voice (not a boy’s) with the same range as an alto is called a “countertenor”.

10. One piece of a three-piece suit : VEST
Here’s another word that often catches me out. What we call a vest in the US is a waistcoat back in Ireland. When I was growing up there, a vest was what we called an undershirt.

14. Lav : JOHN
The use of “john” as a slang term for a toilet is peculiar to North America. It probably comes from the older slang term of “jack” or “jakes” that had been around since the 16th century. In Ireland, in cruder moments, we still refer to a toilet as “the jacks”.

15. “Horrible” comic strip character : HAGAR
“Hagar the Horrible” is a comic strip that was created by the late Dik Browne and is now drawn by his son, Chris Browne. “Hagar the Terrible” (not “Horrible”) was the nickname given to Dik by his sons.

18. Tennis champ Agassi : ANDRE
“Open” is the autobiography of tennis professional Andre Agassi, published in 2009. An amazing revelation in the book is that Agassi’s famous head of hair was actually a wig for much of his playing career. Can you imagine how hard it must have been to play tennis at his level with a rug stuck on?

26. Alternative to “shape up” : SHIP OUT
The idiom “shape up or ship out” is military slang that hasn’t been around all that long. It dates back to 1956, and originally meant that someone needed to get their act together or else he would be shipped out for active duty.

41. U.K. honour : OBE
The Most Excellent Order of the British Empire is an order of chivalry in the UK that was established in 1917 by King George V. There are five classes within the order, which are in descending seniority:

42. Posturepedic maker : SEALY
The Sealy Corporation makes mattresses. The company name comes from the city where it started out in 1881, namely Sealy, Texas. Sealy Corporation is now headquartered in Trinity, North Carolina.

46. ___ rummy : GIN
Gin rummy is a variant of the slower game of standard rummy and was introduced in 1909 by Elwood Baker and his son.

47. Top of a woman’s swimsuit : BRA
The origin of the name “bikini”, a type of bathing suit, seems very uncertain. My favorite story is that it is named after the Bikini Atoll, site of American A-bomb tests in the forties and fifties. The name “bikini” was chosen for the swim-wear because of the “explosive” effect it had on men who saw a woman wearing the garment!

51. Neckwear for boyfriends? : BEAU TIES (beauties)
“Beau” is the French word for “beautiful”, in the male sense.

56. “O Sole ___” : MIO
“‘O sole mio” is a famous Italian song from Naples, written in 1898. The lyrics are usually sung in the original Neapolitan, as opposed to Italian. The title translates from Neapolitan into “My Sun” (and not into “O, My Sun” as one might expect). It’s a love song of course, sung by a young man declaring that there is a sun brighter than that in the sky, the sun that is his lover’s face. Awww …

63. Rosemary, for one : HERB
The name of the herb called rosemary comes from the Latin “ros marinus” which means “dew of the sea”. The idea is that rosemary can in fact grow in some locations with only the moisture that is carried by a sea breeze.

66. Song in a libretto : ARIA
“Libretto” is the diminutive form of “libro”, the Italian word for a book. We use “libretto” to mean the text used in a musical work, or perhaps the “book” of that musical work.

67. Andrea ___ (ship in 1956 headlines) : DORIA
The SS Andrea Doria was an Italian ocean liner with the home port of Genoa. She was named after Andrea Doria, a 16th-century general from the city. As always seems to be the case with ships that go down, the Andrea Doria was the pride of the fleet and was deemed to be the biggest, fastest and safest of Italy’s ships in the fifties. Her end came in 1956 when she collided with the MS Stockholm off the coast of Nantucket Island. Such was the damage to the side of the vessel that she quickly and severely listed to starboard, rendering half her lifeboats unusable. Nonetheless, 1,660 crew and passengers were rescued by vessels that came to her aid. Only 46 lives were lost, mainly in the collision itself. The Andrea Doria capsized and sank eleven hours after the collision.

68. Furry ally of Luke Skywalker : EWOK
The Ewoks are creatures who live on the moon of Endor, first appearing in “Star Wars Episode VI: Return of the Jedi”. They’re the cute and cuddly guys that look like teddy bears.

69. Major Calif.-to-Fla. route : I-TEN
I-10 is the most southerly of the interstate routes that crosses from the Atlantic to the Pacific. I-10 stretches from Santa Monica, California to Jacksonville, Florida.

Down
1. Cracked a little : AJAR
Our word “ajar” is thought to come from Scottish dialect, in which “a char” means “slightly open”.

2. Target’s target, e.g. : LOGO
Target is the second-largest retailer in the country, with Walmart being the biggest.

6. Indian princess : RANI
A ranee (also spelled rani) is the female equivalent of a raja in India.

7. Nash who loved to rhyme : OGDEN
The poet Ogden Nash was well known for his light and humorous verse. Try this one:

8. Ankle bones : TARSI
The tarsals (also “tarsi”) are the ankle bones, equivalent to the carpals in the wrist.

9. Byron’s “before” : ERE
George Gordon Byron, known simply as “Lord Byron”, was an English poet active in the early 1800s. Byron was equally as famous for his poetry as he was for the wild excesses in his personal life. Byron lived much of that life outside of England, and fought for revolutionaries in both Italy and Greece. He died from a fever contracted while fighting for the Greeks against the Ottomans.

11. Food-poisoning bacteria : E COLI
Escherichia coli (E. coli) are usually harmless bacteria found in the human gut, working away quite happily. However, there are some strains that can produce lethal toxins. These strains can make their way into the food chain from animal fecal matter that comes into contact with food designated for human consumption.

21. Lav : LOO
When I was growing up in Ireland, a “bathroom” was a room that had a bath and no toilet. The separate room with the commode was called “the toilet” or sometimes the W.C. (the water closet). Apparently the term closet was used because in the 1800s when homeowners started installing toilets indoors they often displaced clothes in a “closet”, as a closet was the right size to take the commode. It has been suggested that the British term “loo” comes from Waterloo (water-closet … water-loo), but no one seems to know for sure.


25. Bill ___, the Science Guy : NYE
That would be “Bill Nye the Science Guy”. Bill’s show ran on Disney for 4 years from 1993-97. I was surprised to learn that Bill Nye was married briefly to Blair Tindall, the author of “Mozart in the Jungle”. That’s a great book, if anyone is interested …

28. Pupil surrounder : IRIS
The iris is the colored part of the eye with an aperture in the center that can open or close depending on the level of light hitting the eye.

33. Japanese sash : OBI
The sash worn as part of traditional Japanese dress is known as an obi. The obi can be tied in what is called a butterfly knot.

34. What “Peter Piper picked a peck of pickled peppers” has a lot of : PEES
The earliest written version of the “Peter Piper” nursery rhyme and tongue twister dates back to 1813 London:

35. Villain who says “O, beware, my lord, of jealousy” : IAGO
Iago is the schemer in Shakespeare’s “Othello”. Iago is a soldier who fought alongside Othello and feels hard done by, missing out on promotion. He hatches a plot designed to discredit his rival Cassio by insinuating that Cassio is having an affair with Desdemona, Othello’s wife. By the end of the play it’s Iago himself who is discredited and Othello (before committing suicide) apologizes to Cassio for having believed Iago’s lies. Heavy stuff …

36. Yale students, informally : ELIS
Eli is the nickname for a graduate of Yale University, a term used in honor of the Yale benefactor Elihu Yale.

37. “Auld Lang ___” : SYNE
Robert Burns is a cultural icon in Scotland and for Scots around the world. As a poet, Burns was a pioneer in the Romantic movement in the second half of the 18th century. One of his most famous works is his poem “Auld Lang Syne” which has been set to the tune of a traditional Scottish folk song and is used to celebrate the New Year in the English-speaking world.

44. China’s Chou En-___ : LAI
Zhou Enlai (also Chou En-Lai) was the first government leader of the People’s Republic of China and held the office of Premier from 1949 until he died in 1976. Zhou Enlai ran the government for Communist Party Leader Mao Zedong, often striking a more conciliatory tone with the West than that of his boss. He was instrumental, for example, in setting up President Nixon’s famous visit to China in 1972. Zhou Enlai died just a few months before Mao Zedong, with both deaths leading to unrest and a dramatic change in political direction for the country.

51. Faith founded in 19th-century Persia : BAHA’I
The Baha’i Faith is relatively new in the scheme of things, founded in Persia in the 1800s. One of the tenets of the religion is that messengers have come from God over time, including Abraham, the Buddha, Jesus, Muhammad and most recently Bahá’u’lláh, who founded the Baha’i Faith.

60. Des Moines’s state : IOWA
The city of Des Moines, the capital of Iowa, takes its name from the Des Moines River. The river in turn takes its name from the French “Riviere des Moines”, meaning “River of the Monks”. It looks like there isn’t any “monkish” connection to the city’s name per se. “Des Moines” was just the name given to the river by French traders who corrupted “Moingona”, the name of a group of Illinois Native Americans who lived by the river. However, others do contend that the French Trappist monks, who lived fully 200 miles away from the river, somehow influenced the name.

62. Worshiper in a temple : SIKH
Sikhism is a religion that was founded in the 15th century in the Punjab region, which straddles the India-Pakistan border. Even though Sikhism was established relatively recently, it is now the fifth-largest organized religion in the world.