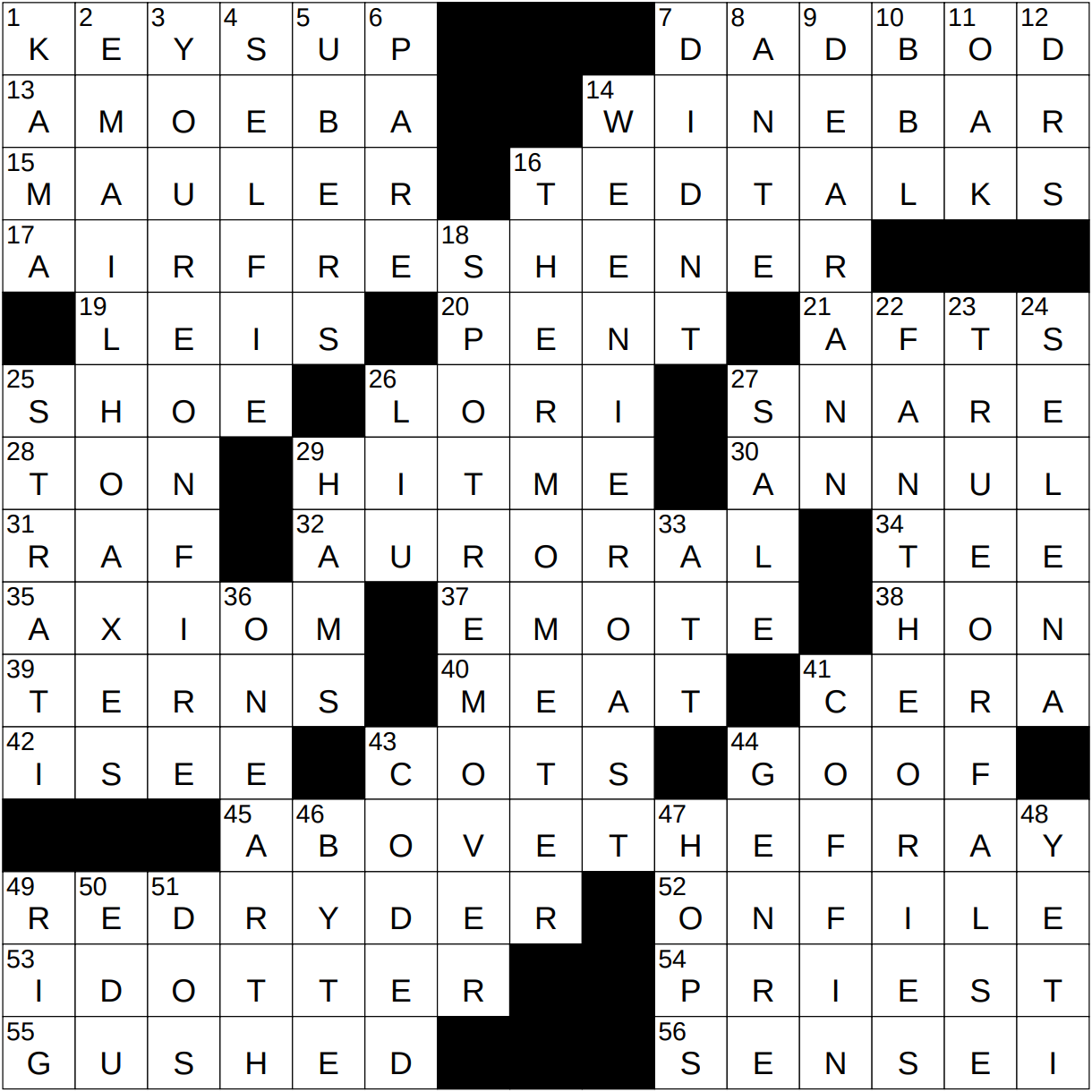 Constructed by: Christina Iverson & Tom Pepper
Edited by: Will Shortz

A “dad bod” is a man’s body that is softly rounded. Well, that’s the description I like to use for mine …

Professional boxer Jack Dempsey was World Heavyweight Champion from 1919 to 1926. Born in the Colorado town of Manassa, one of Dempsey’s nicknames was the Manassa Mauler. Dempsey lost his title in a memorable fight against Gene Tunney, after which Jack reportedly said to his wife, “Honey, I forgot to duck”. President Ronald Reagan cited these same words to Nancy Reagan when she visited her husband in the Emergency Room after the 1981 attempt on his life.

19 Gifts often given with kisses : LEIS

Lori Lightfoot assumed the office of Mayor of Chicago in 2019. She is the first LGBT black female mayor of any major city in the US.

“Per ardua ad astra” is Latin for “through struggle to the stars”. These words have been the motto of the Royal Air Force (RAF) since 1912.

35 It goes without saying : AXIOM

In the world of mathematics, an axiom is a proposition, one that is taken as basic and self-evident. The term “axiom” extends beyond mathematics with a similar meaning, an established or self-evident truth.

56 Honorific that translates to “born before” : SENSEI

Kama is the Hindu god of love. He is portrayed as a youth bearing a bow and arrows, much like Eros and Cupid. Kama lends his name to the “Kama Sutra”.

4 Something you reach out and take : SELFIE

A selfie is a self-portrait, one usually taken with a digital camera or cell phone. A “group selfie” is sometimes referred to as a “groufie” or “wefie”. A “couple selfie” is known as an “usie” or “ussie”, although those terms are sometimes also used for a group picture.

We use the verb “to winnow” in a figurative sense to describe the separation of something good from a collection of worthless things. The more literal meaning is the freeing of grain from the lighter chaff by blowing on the mixture, or by throwing it in the air.

“Wienie” and “weenie” are informal variants of “wiener”.

What we call a wiener in this country is known as a Vienna sausage in Germany. It was first produced by a butcher from Frankfurt who was living in Vienna, hence the name “Wiener”, which is German for “of Vienna”. Paradoxically, the same sausage is called a Frankfurter in Vienna, as it was created by someone from Frankfurt. It’s all very confusing …

The common cold (also known as a “head cold”) is caused by a viral infection of the upper respiratory tract. There are over 200 strains of virus that are known to cause the disease.

24 Gomez who got her start on “Barney & Friends” : SELENA

Selena Gomez is an actress and singer from Grand Prairie, Texas. Gomez’s first television role was in the children’s show “Barney & Friends”. She then played the lead in the TV series “Wizards of Waverly Place”. Gomez’s fans often refer to themselves as “Selenators”. Offscreen, Gomez made a splash as the girlfriend of Canadian singer Justin Bieber for a couple of years.

Soul music originated in the United States and was born out of gospel music and rhythm & blues. I read one quotation that describes soul as “music that arose out of the black experience in America”.

The foodstuff that we call “hops” are actually the female flowers of the hop plant. The main use of hops is to add flavor to beer. The town in which I used to live here in California was once home to the largest hop farm in the world. Most of the harvested hops were exported all the way to the breweries of London, where they could fetch the best price.