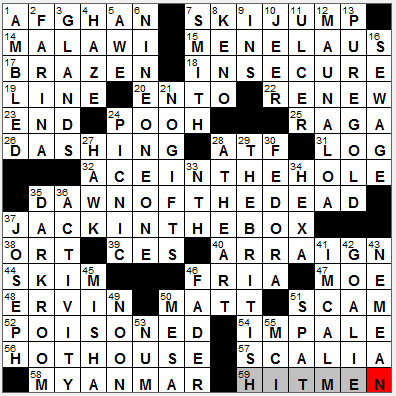 Today’s Wiki-est, Amazonian Googlies
Across
1. Shaggy dog : AFGHAN
The Afghan Hound is a dog with a thick hairy coat. The breed originated in Afghanistan in cold areas where all that insulation was an advantage.

14. African country with a namesake lake : MALAWI
Malawi is in southeast Africa and is one of the least-developed countries in the world. The Malawi population has a low life expectancy and a high infant mortality rate. HIV/AIDS is a major killer. The British colonized the area in 1891, at which point it was called Nyasaland. Malawi became independent in 1964.

15. Rival of Paris : MENELAUS
In Greek mythology, Atreus was the father of Agamemnon and Menelaus. It was Menelaus who married Helen of Troy who was abducted by Paris, and Menelaus’s brother Agamemnon who led the Greeks in the resulting Trojan War.

19. Extra desire? : LINE
An extra in a movie might desire a spoken line, as then he or she gets paid more money.

20. Prefix with -zoic : ENTO-
An organism that is entozoic lives inside an animal. An organism growing on the outside of an animal is known as epizoic.

25. Eastern melody : RAGA
Raga isn’t really a type of music, but has been described as the “tonal framework” in which Indian classical music is composed. Ravi Shankar is perhaps the most famous raga virtuoso (to us Westerners).

32. Secret weapon : ACE IN THE HOLE
Stud poker is the name given to many variants of the card game, all characterized by the dealer giving each player a mix of cards face-down and face-up. The cards facing downwards are called “hole cards”, cards only visible to the individual who holds that particular hand. That gives rise to the phrase “ace in the hole”, a valuable holding of which only that player is aware.

35. 1978 sequel set in a shopping mall : DAWN OF THE DEAD
“Dawn of the Dead” is a 1978 horror movie all about zombies going after some folks barricaded into a shopping mall. I really don’t do zombies nor horror films.

37. It might pop up at a nursery : JACK-IN-THE-BOX
A Jack-in-the-box is child’s toy. It’s a box with a crank handle at the side. Turning the crank causes a tune to play (usually “Pop Goes the Weasel”), and at the right moment the lid pops open and a spring loaded clown character jumps up out of the box.

39. These, in Toulon : CES
As well as being a town on southern coast of France, Toulon is a military port and home to the French Mediterranean Fleet. In particular it is the home port of the French Navy’s sole aircraft carrier, the Charles de Gaulle.

40. Charge : ARRAIGN
In the law, to arraign someone is to call a person before a court to answer charges that have been brought.

48. Senator of Watergate fame : ERVIN
Sam Ervin was a Democratic Senator from North Carolina, serving from 1954 until 1974. Senator Ervin worked on two notable committees during his term. One one he helped bring down Senator Joseph McCarthy in 1954, and on the other he helped investigate the Watergate scandal that brought down President Richard Nixon.

50. “South Park” co-creator Stone : MATT
Matt Stone and Trey Parker are the co-creators of “South Park”, an animated television sitcom that I really can’t bear to watch. Before “South Park”, Stone and Parker came up with some well received holiday short subject films called “Jesus vs. Frosty” and “Jesus vs. Santa”, neither of which I’ll be watching …

Additionally, it is generally acceted that Pope Gregory V was indeed poisoned, in the year 999.

57. He took Rehnquist’s seat : SCALIA
Antonin Scalia was appointed to the Supreme Court by President Reagan in 1986, and is now the longest serving member of the court.

58. Home of Mandalay : MYANMAR
The Republic of the Union of Myanmar is the official name of the Asian country that some nations still recognize as the Union of Burma.

Mandalay is the second largest city in Myanmar (also known as Burma), and is the main commercial center of the country.

Down
2. Breakfast bowlful : FARINA
Farina is semolina, or cream of wheat. It is made from wheat grain in which much of the nutritious ingredients are removed leaving a fine “flour”. The name “Farina” is the Latin word meaning “flour”.

4. Break a pledge? : HAZE
A pledge is a first-year student who pledges to join a fraternity or sorority.

6. It might be hard-pressed to get assistance : NINE ONE ONE
The first use of an emergency phone number nationally was in the UK in 1937, where the number 999 was introduced to call emergency services. If you need emergency services in the UK or Ireland to this day, you have to dial 999. It’s not really clear why 911 became the emergency number in the US. The most credible suggestion (to me) is that when it was introduced by the FCC in 1967, it was a number that “fit” with the numbers already used by AT&T for free services, i.e. 211 for long distance; 411 for information; 611 for repair service.

8. Vegas game : KENO
The name “Keno” has French or Latin roots, with the French “quine” being a term for five winning numbers, and the Latin “quini” meaning “five each”. However, the game actually originated in China. Keno was introduced into the West by Chinese immigrants who were working on the first Transcontinental Railroad in the 1800s.

11. Inside trouble : ULCER
A peptic ulcer, until fairly recently, was believed to be caused by undue amounts of stress in one’s life. It is now known that 70-90% of all peptic ulcers are in fact associated with a particular bacterium.

12. Peak east of Captain Cook : MAUNA LOA
Mauna Loa on the “big island” of Hawaii is the largest volcano on the planet (in terms of volume). The name “Mauna Loa” is Hawaiian for “Long Mountain”.

Captain Cook is a town on the big island of Hawai’i. The town takes its name from the Captain Cook Coffee Company, which was where the community post office was located at the beginning of the 20th century.

24. It might be put on a blanket : PICNIC
Our term “picnic” comes from the French word that now has the same meaning: “pique-nique”. The original “pique-nique” was a fashionable pot-luck affair, not necessarily held outdoors.

27. Atlanta cager : HAWK
The NBA’s Atlanta Hawks started out as the Buffalo Bisons in 1946, although after only a few months the team was moved to Moline, Illinois as the Tri-Cities Blackhawks. The Blackhawks were one of the 17 original teams playing at the founding of the National Basketball Association. There was another move in 1951 and a renaming to the Milwaukee Hawks, and yet again in 1955 when the team became the St. Louis Hawks. The latest move was to Atlanta, in 1968.

29. Who “are coming,” in a historical declaration : THE BRITISH
Paul Revere is of course famous for having alerted the Colonial militia when the British military arrived in the build up to the battles of Lexington and Concord. Revere earned his living as a silversmith. After the war, Revere returned to his trade and diversified into other metalwork. Revere was the first American to develop a process to roll copper into sheets so that the metal could be used to sheathe the hulls of naval vessels.

30. Part of a Freddy Krueger costume : FEDORA
A fedora is a lovely hat, I think. It is made of felt and is similar to a trilby, but has a broader brim. “Fedora” was a play written for Sarah Bernhardt and first performed in 1889. Bernhardt had the title role of Princess Fedora, and on stage she wore a hat similar to the modern-day fedora. The play led to the introduction of a women’s fashion accessory, the fedora hat, commonly worn by women into the beginning of the twentieth century. Men then started wearing fedoras, but only when women gave up the idea …

Freddy Krueger is the creepy serial killer in the “A Nightmare on Elm Street” movies. Krueger has a burned and disfigured face, wears a brown fedora and a leather glove with metal razors that he uses to kill his victims during their nightmares. He is played by the actor Robert Englund in all of the movies.

42. Hands-on position? : GOALIE
In soccer the goalie is the only player who can handle the ball.

43. Like the beast in Hercules’ first labor : NEMEAN
The Twelve Labors of Hercules is actually a Greek myth, although Hercules is the Roman name for the hero that the Greek’s called Heracles. The first of these labors was to slay the Nemean Lion, a monster that lived in a cave near Nemea. Hercules had a tough job as the lion’s golden fur was impenetrable to normal weapons. One version of the story is that Hercules killed the lion by shooting an arrow into its mouth. Another version says that Hercules stunned the monster with a club and then strangled him with his bare hands.

45. Diminutive for Baryshnikov : MISHA
Mikhail “Misha” Baryshnikov started his dancing career with the Kirov Ballet in Leningrad before defecting to Canada in 1974. The only time my wife ever lined up to get an autograph was when she did so outside the stage door after seeing Baryshnikov dance in Syracuse, New York many moons ago. The man is a god in her eyes …

46. Radio knob : FADER
A fader is a knob (or usually a slider) that gradually increases or decreases the level of an audio signal. You’ll often see audio engineers at a performance or in a recording studio sliding buttons up and down. Those are faders.

50. Southwest city founded by Mormon pioneers : MESA
The city of Mesa, Arizona is in effect a suburb of Phoenix. The original settlement of non-Native Americans was founded by Daniel Webster Jones who led a Mormon group from St. George, Utah. The settlement was first called Jonesville, then Fort Utah and eventually Lehi. A second group of Mormons arrived and formed a settlement on top of a nearby mesa. It was this use of a mesa that eventually gave the city its current name.

53. Book before Deut. : NUM
Numbers is the fourth Book of the Hebrew Bible, with the English title coming from the “numbering of the Israelites”, a census taken in the wilderness of the Sinai and again on the plain of Moab.

55. Old long-distance letters : MCI
MCI was a giant telecom company that suffered a similar fate to Enron, and around about the same time. MCI’s stock price fell in 2000 and in maneuvers designed to protect the price, the company committed illegal acts. The larger-than-life CEO back then, Bernie Ebbers, is now serving a 25-year sentence in Louisiana.