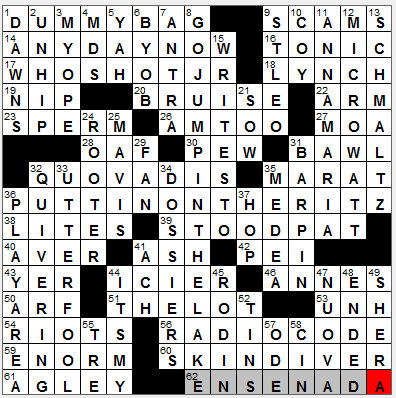 Today’s Wiki-est, Amazonian Googlies
Across
1. Aid in football tackling drills : DUMMY BAG
I guess a “dummy bag” is a stuffed dummy that is masquerading as an opponent.

9. Grifter’s repertoire : SCAMS
A grifter is a confidence trickster, although the term has been used for non-violent criminals in general.

16. Boston pop : TONIC
A carbonated drink can be called by various names depending on the location. Back in Ireland, believe it or not, a drink like Sprite is called “lemonade”. In most of the US Northeast, the term “soda” is used generically, and in the South a “coke” might not be a cola drink. And the Bostonians apparently used the term “tonic” generically for a carbonated drink.

17. Old TV cliff-hanger : WHO SHOT JR?
The mega-hit TV show “Dallas” started out life as a five-part mini-series in 1978. Who can remember who it was that shot J.R.? (It was Kristin Shepard, JR’s mistress … and sister-in-law).

18. Jane of “Glee” : LYNCH
Jane Lynch plays the coach for the cheerleading squad in the TV show “Glee”. I am not a big fan of the show, but I did enjoy Lynch’s performance in the movie “Julie and Julia” in which she played Julia Child’s sister.

27. Feathered 500-pounder of old : MOA
Moas were flightless birds native to New Zealand that are now extinct. The fate of the Moa is a great example of the detrimental effect that humans can have on animal populations. The Maoris arrived in New Zealand about 1300 AD, upsetting the balance of the ecosystem. The Moa were hunted to extinction within 200 years, which had the knock-on effect of killing off the Haast’s Eagle, the Moa’s only predator prior to the arrival of man.

32. Epic featuring Nero : QUO VADIS
“Quo Vadis” is an epic drama made in 1951, an adaptation of the 1896 novel of the same name written by Henryk Sienkiewicz. At the top of the bill were Robert Taylor and Deborah Kerr, with Peter Ustinov playing the Emperor Nero. There was also an uncredited extra making her first appearance on the screen, a young lady by the name of Sophia Loren.

35. Corday slew him : MARAT
Jean-Paul Marat was a prominent figure in the French Revolution. Marat was famously murdered in his bath by a young woman called Charlotte Corday who was a Royalist. The gruesome event was immortalized in a celebrated painting by Jacques-Louis David.

36. Hit from Berlin : PUTTIN’ ON THE RITZ
“Puttin’ on the Ritz” is a song written by Irving Berlin in 1929, for the musical film of the same name. Back in the twenties, the expression “puttin’ on the Ritz” was used to mean “dressing very fashionably”, well enough for a visit to the Ritz Hotel …

38. The Chi-___ (“Oh Girl” group) : LITES
The Chi-Lites are vocal quartet who sing smooth soul songs. The foursome got together in the early seventies in Chicago (hence the name “Chi-Lites”).

39. Didn’t change hands? : STOOD PAT
To stand pat is to resist change. The term comes from the game of poker, in which one “stands pat” if one keeps one’s hand as is, not drawing any extra cards.

42. Designer of D.C.’s L’Enfant Plaza : PEI
I. M. Pei (full name: Ieoh Ming Pei) is an exceptional American architect, born in China. Of Pei’s many wonderful works, my favorite is the renovation of the Louvre in Paris, especially the Glass Pyramid in the courtyard.

L’Enfant Plaza in Washington, D.C. was designed by the architect I.M. Pei. The plaza was named in honor of Pierre L’Enfant, the architect who laid out the the streets of nation’s capital.

46. Auntie ___ (pretzel bakery chain) : ANNE’S
Auntie Anne’s is a chain of pretzel bakeries that was founded in 1988. The chain started out as a simple stand in a farmer’s market in Downingtown, Pennsylvania. There are now almost 900 outlets in about a dozen countries.

50. Lab report? : ARF
The Labrador breed of dog has been around at least since 1814, and the chocolate Labrador appeared over a decade later in the 1930s.

53. Durham sch. : UNH
The University of New Hampshire (UNH) is the largest university in the state. UNH was founded as the New Hampshire College of Agriculture and the Mechanic Arts in 1866 in Hanover. The college was moved to Durham in the early 1890s, which is where UNH’s main campus is located to this day.

61. Errant, to Burns : AGLEY
The famous Robert Burns poem “To a Mouse” describes the little creature as a “wee, sleekit, cow’rin, tim’rous beastie” (Small, crafty, cowering, timorous little beast). There’s another oft-quoted line later in the poem, “The best-laid schemes o’ mice an’ men, gang aft agley” (The best-laid schemes of mice and men, go often awry). John Steinbeck used this line as inspiration for the title of his 1937 novel “Of Mice and Men”.

Down
3. One who’s shortsighted : MYOPE
A myope is someone suffering from myopia, short-sightedness.

RSVP stands for “Répondez s’il vous plaît”, which is French for “please, answer”.

7. Bone cavities : ANTRA
An “antrum” is a bodily cavity or chamber. For example, the maxillary antrum is the largest of the paranasal sinuses.

11. “Carnival!” Tony winner Alberghetti : ANNA MARIA
Anna Maria Alberghetti is an operatic singer and actress from Italy who made a career for herself in the US. Alberghetti had quite a variation of roles in her life. As a 13-year-old child she gave a classical concert in Carnegie Hall in New York, and in her twenties starred opposite Jerry Lewis as Princess Charming in “Cinderfella”.

12. Little bit of power : MICROWATT
James Watt was a Scottish inventor, a man who figured prominently in the Industrial Revolution in Britain largely due to the improvements he made to the fledgling steam engine. The SI unit of power is called the watt, named in his honor.

13. Mush : SCHMALTZ
“Schmaltz” is an informal term used to describe things that are excessively sentimental. The word comes from the Yiddish “shmalts”, which means “melted fat”. Indeed, the modern German word for fat or grease is Schmaltz, and it can be used in the same figurative way in that language.

25. Staples of R&B : MAVIS
Mavis Staples is an R&B and gospel singer who started out her singing career with her family’s band, the Staple Singers. Staples was a good friend of singer Bob Dylan. Dylan went as far as asking Mavis’s father for permission to marry his daughter.

34. Reading for 007 : DOSSIERS
James Bond was of course the creation of the writer Ian Fleming. Fleming “stole” the James Bond name from an American ornithologist. The number 007 was “stolen” from the real life English spy John Dee. Dee would sign his reports to Queen Elizabeth I with a stylized 007 to indicate that the reports were for “her eyes only”.

35. Euripides tragedy : MEDEA
Euripides was a great playwright of Ancient Greece, renowned for his tragedies. Euripides was one of the three great writers of tragedy of classical Athens, alongside Aeschylus and Sophocles.

41. Holy cow for Hamburgers? : ACH
The German exclamation “ach!” is usually translated into English as “oh!”

Hamburg is the second largest city in Germany, and the third largest port in Europe.

45. He sculpted Adam and Eve : RODIN
The Rodin Museum is my favorite of all the museums in Paris. The Musée Rodin is very special in that the building and garden that hold all of the works was once Auguste Rodin’s actual home and studio. Well worth a visit if you’re in the City of Lights …

47. Milan’s Porta ___ : NUOVA
Porta Nuova is a famous gate in the wall surrounding the old city of Milan in Italy. “Porta Nuova” translates as “new gate”, and gives its name to the surrounding district in the city. The “new gate” isn’t that old in Italian terms, built in the early 1800s.

49. “Princess of Power” of cartoons : SHE-RA
“She-Ra: Princess of Power” is an animated television show, a spinoff of the very successful “He-Man and the Masters of the Universe”. Both shows are aimed at young people, with “He-Man” targeted at boys and “She-Ra” at girls.

52. Spam is removed from them : TINS
Spam is a brand of precooked meat product that has been made by Hormel since 1937. The ingredients in Spam include chopped pork shoulder, modified potato starch as a binder, and sodium nitrite as a preservative. Apparently 3.8 cans of Spam are consumed in the US every second. I find that hard to believe though …

57. Many a paean : ODE
A paean is a poem or song that expresses triumph or thanksgiving. “Paean” comes from the ancient Greek “paian” meaning “song of triumph”.

58. Red letters? : CIN
The Red Scare (i.e. anti-communist sentiment) following WWII had such an effect on the populace that it even caused the Cincinnati baseball team to change its name from the Reds. The team was called the Cincinnati Redlegs from 1953-1958, as the management was fearful of losing money due to public distrust of any association with “Reds”.