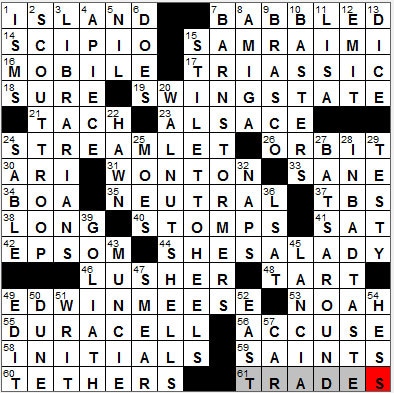 Today’s Wiki-est, Amazonian Googlies
Across
14. Second Punic War general : SCIPIO
Scipio Africanus was a general and politician in the Roman Republic. Scipio’s most notable victory as a soldier was in the Second Punic War between Rome and Carthage. Scipio was the Roman general who defeated Hannibal at Zama in the final battle of the war.

15. Director of the “Evil Dead” trilogy : SAM RAIMI
Sam Raimi is a very successful director and producer, responsible for the “Spiderman” series of films among others, and TV series’ such as “Xena: Warrior Princess”.

19. Purple territory on some maps : SWING STATE
On political maps, red states are Republican and blue states Democrat. The designation of red and blue states is a very recent concept, only introduced in the 2000 presidential election by TV journalist, the late Tim Russert. In retrospect, the choice of colors is surprising, as in other democracies around the world red is usually used to describe left-leaning socialist parties (the reds under the bed!), and blue is used for conservative right-wing parties. In election cycles, swing/battleground states are often depicted in purple.

23. Territory returned to France by the Treaty of Versailles : ALSACE
Of the 27 regions of metropolitan France (i.e. the territory of France within Europe), the smallest is Alsace. Alsace sits at the very east of the country, right on the border with Germany.

The 1919 Treaty of Versailles ended the war between Germany and the Allied Powers, and was the most significant treaty signed at the close of WWI. The war itself ended in November of 1918, but it took six months of negotiations at a peace conference in Paris to hammer out a peace treaty. The treaty called for reparations to be paid by Germany to the Allies, an amount so heavy that it could have taken Germany until the 1980s to settle the debt in full. As it turned out, the agreement was not honored consistently by Germany, and when Adolf Hitler came to power, reparation payments were halted altogether.

31. Soup tidbit : WONTON
A wonton is a dumpling used in Chinese cooking. Wontons are often boiled and served in a wonton soup.

34. Predator that suffocates its prey : BOA
Boa constrictors are members of the Boidae family of snakes, all of which are non-venomous. Interestingly, the female boa is always bigger than the male.

37. “Conan” airer : TBS
Before Conan O’Brien came to fame as a late night talk show host he was a writer. He wrote for both “Saturday Night Live” and “The Simpsons”.

42. Old English spa town : EPSOM
The Surrey town of Epsom in England is most famous for its racecourse, at which is run the Epsom Derby every year, one of the three races that make up the English Triple Crown. You might also have heard of Epsom salt. Epsom salt is magnesium sulfate, originally prepared by boiling down mineral waters. Epsom was indeed a spa town at one time.

44. Tom Jones hit written by Paul Anka : SHE’S A LADY
Tom Jones, now he has a real voice and is a great showman. I saw him in Las Vegas many, many moons ago, one of the best Vegas shows I’ve ever attended. Although Tom Jones is a carefully selected stage name (he was born Thomas Woodward) the name isn’t too far from reality as Jones is his mother’s maiden name. The stage name was chosen by his manager to capitalize on the appeal of “Tom Jones”, a filmed version of the Henry Fielding novel that was having a successful run at the time. The name also emphasized Tom’s Welsh roots, as Jones is a very common name in Wales.

46. More verdant : LUSHER
Back in the late 1500s, “verdant” simply meant “green”, but we now tend to use the term to mean green and lush with vegetation. “Viridis” is the Latin for “green”.

48. High tea goody : TART
Over in the UK, high tea is a major meal served in the late afternoon or early evening, and of course it should include a pot of tea!

49. Former attorney general in the Iraq Study Group : EDWIN MEESE
Ed Meese was born in Oakland, California just down the road here and spent 24 years in the office of the Treasurer of Alameda County, the county in which I live. After military service, Meese earned himself a law degree at UC Berkeley. Later, as Chief of Staff for President Reagan, he was instrumental in a famous decision to crack down on student protesters at Berkeley which resulted in one protester dying and a two-week occupation of the city by the California National Guard.

The Iraq Study Group was appointed by Congress to assess the situation in the Iraq War and make recommendations on how to proceed. The Group produced a report in 2006, recommending a phased withdrawal of US troops.

53. Patriarch who died at age 950 : NOAH
Genesis 6:19-20 states that Noah was instructed to take two animals of every kind into the ark. Later, in Genesis 7:2-3 Noah was instructed to take on board “every clean animal by sevens … male and female, to keep offspring alive on the face of all the earth”. Apparently “extras” (7 rather than 2) were needed for ritual sacrifice.

59. Good Samaritran types : SAINTS
There’s a typo in the clue as a native of Samaria is a “Samaritan”. Maybe “Samaritran” was Samaria’s Metro system …?

“The Good Samaritan” is a parable told by Jesus that can be read in the Gospel of Luke. According to the story, a Jewish traveler is robbed and beaten and left for dead at the side of the road. A priest happens by and sees the poor man, but does not stop to help. A fellow Jew also passes and refuses to help. A third man stops and gives aid. This kind person is a Samaritan, a native of Samaria. Back then Jewish and Samaritan people were said to generally despise each other, and yet here a detested creature gives aid. Jesus told to the story to a self-righteous lawyer, the intent being (I assume) to shake up his self-righteousness.

Down
7. Some traveling performers : BARNSTORMERS
The original “barnstormers” were troupes of travelling actors who performed in barns in Upstate New York in the early 1800s. The term was then extended to apply to electioneers touring to make their case to the voters. In the 1920s the term was further extended to include airplane pilots who performed stunts at country fairs.

8. Bygone computer brand : AMIGA
Amiga is a line of desktop computers that was made by Commodore in the eighties and nineties.

9. 1997 title role for Depp : BRASCO
The 1997 movie “Donnie Brasco” is about an FBI agent who infiltrates a New York City crime family. The film is loosely based on the true story of agent Joseph Pistone who worked his way into the Bonanno family. Johnny Depp plays Pistone on screen, and uses the name Donnie Brasco when undercover.

11. Phoebe’s portrayer on “Friends” : LISA
The character Phoebe Buffay is played on the sitcom “Friends” by the actress Lisa Kudrow. Kudrow plays the ditsy member of the troupe of friends, but I’ve always viewed her as the “smartest” of the group of actors in real life, as best I could tell. Kudrow is behind the US version of the British genealogy show “Who Do You Think You Are?” a very entertaining bit of television.

13. Shooter’s pair : DICE
As we all know, the numbers on dice are arranged so that the opposite faces add up to seven. Given this arrangement, the numbers 1, 2 and 3 all meet at a common vertex. Now, there are two ways of arranging the 1, 2 and 3 around the common vertex, a so called right-handed die (clockwise 1-2-3) or a left-handed die (counterclockwise 1-2-3). Traditionally, dice used in Western cultures are right-handed, whereas Chinese dice are left-handed. Quite interesting …

22. “Foul Play” actress : HAWN
I remember watching the ditsy Goldie Hawn character on “Rowan & Martin’s Laugh-In”. Hawn used to give great performances on the show, convincing everyone that she was the stereotypical dumb blonde. Well, what a career she was to carve out for herself!

“Foul Play” is a very fun thriller/comedy film starring Goldie Hawn and Chevy Chase. Below the comedy, there’s a nice Hitchcock feel to the movie as there are some obvious homages to “The 39 Steps”, “North by Northwest” and “The Man Who Knew Too Much”.

25. Springfield bar : MOE’S
Moe Szyslak is the surly bartender and owner of Moe’s Tavern in “The Simpsons” animated TV show. I don’t really care for “The Simpsons”, but Hank Azaria who supplies the voice for the Moe character … him I like …

36. Obstacle for an aspiring D.A. : LSAT
The Law School Admission Test (LSAT) has been around since 1948.

39. He went down in the Valley of Elah : GOLIATH
In the story of David and Goliath, the Israelites and the Philistines faced each other in battle at the Valley of Elah. Goliath was the warrior champion of the Philistines and each day challenged the Israelites to send out their champion to decide the battle in a one-on-one fight. No one was courageous enough to take the challenge until young David agreed to fae the mighty Goliath. And of course David felled the giant soldier with a stone from his sling.

43. Indiana city nicknamed “Middletown, U.S.A.” : MUNCIE
In the 1920s, two sociologists conducted a study in a “typical Middle-American community” that they dubbed “Middletown, USA”. It turned out that the actual community in the study was Muncie, Indiana.

45. Italian automaker : LANCIA
Vincenzo Lancia formed his car company in Turin, Italy in 1906. Lancia Automobiles is now part of Fiat, and has been so since 1969.

50. Hill with a “slip face” : DUNE
A barchan sand dune is a ridge with one side having a relatively gentle slope, and the other a more steep fall off. The upwind side is the gentler slope and is comprised of wind-packed sand. The downwind slope is also called the slip face as it is formed as packed sand slips away from the top of the dune.

51. Legal document : WRIT
A writ is an order issued by some formal body (these days, usually a court) with the order being in written form. Warrants and subpoenas are examples of writs.

54. Gas station name : HESS
The Hess Corporation is an oil company based in New York City. In 1964, the company started selling toy trucks with the Hess logo on them, in Hess gas stations. The company has been selling the trucks every since, bringing out new models just before Christmas. They have become quite collectible and the old ones can fetch a pretty penny.