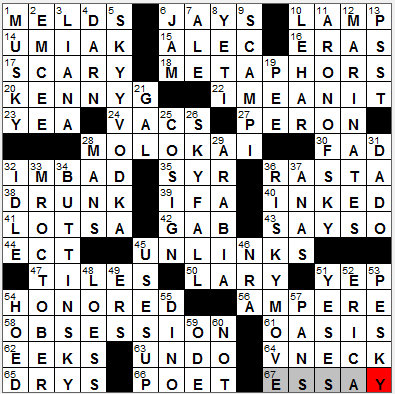 CROSSWORD SETTER: Don Gagliardo & Zhouqin Burnikel
THEME: 2012 James Bond Movie … all of today’s theme answers contain the word SKY and are in the down direction, so they “FALL”. The theme is a nod to the new Bond movie “Skyfall”:

10. Tiffany collectible : LAMP
The Tiffany’s jewelry company is headquartered in New York City. The flagship Tiffany’s store is located at the corner of Fifth Avenue and 57th Street in Manhattan, and of course featured in the delightful Audrey Hepburn movie “Breakfast at Tiffany’s”.

15. Baldwin of “30 Rock” : ALEC
Alec is the oldest of the acting Baldwin brothers. I think Alec’s big break was playing Tom Clancy’s Jack Ryan in “The Hunt for Red October”, but thank goodness that role was taken over by Harrison Ford for the subsequent Jack Ryan movies. Baldwin made a name for himself in recent times playing Jack Donaghy on “30 Rock”, opposite Tina Fey. He has also hosted the sketch show “Saturday Night Live” on more occasions than anyone else (16 times).

20. Saxophonist with the 12x platinum album “Breathless” : KENNY G
Saxophonist Kenny G’s full name is Kenneth Bruce Gorelick. Kenny’s “G” might also stand for “golfer”, as in 2006 he was ranked by “Golf Digest” magazine as the number one golfer working in the field of music.

24. Dust busters, for short : VACS
The first practical portable vacuum cleaner was invented by James Spangler in 1907. Spangler sold the patent for the design to his cousin’s husband, William Henry Hoover. Hoover then made his fortune from manufacturing and selling vacuum cleaners. Hoover was so successful in my part of the world that back in Ireland we don’t use the verb “to vacuum” and instead say “to hoover”, and a hoover is what we call a vacuum cleaner, regardless of who makes it.

27. The Evita of “Evita” : PERON
Nowadays, President Juan Perón of Argentina is perhaps less well-known than his second wife, Eva Perón of “Evita” fame. Juan and Eva Perón were overthrown in a military coup in 1955, although Juan Perón was returned to power in 1973 when he served for only nine months before he passed away. Juan was succeeded in office by his third wife, Isabel Perón.

28. Father Damien’s island : MOLOKAI
Father Damien of Molokai was a priest from Belgium who spent sixteen years caring for people in a leper colony on the Hawaiian island of Molokai. Father Damien eventually contracted the disease and passed away in 1889. He has been known as Saint Damien since 2009 when he was canonized by Pope Benedict XVI.

32. Repeated Michael Jackson lyric in a 1987 hit : I’M BAD
The song “Bad” was written and sung by Michael Jackson, and released in 1987. The song is about being tough on the streets, being “bad”.

35. Neighbor of Iraq: Abbr. : SYR
The modern state that we know as Syria was established after WWI as a French mandate. Syria was granted independence from France in 1946.

47. Mah-jongg draws : TILES
“Mahjong” (also mahjongg and mah-jongg) is the Chinese word for “sparrow”. Mahjong is a game that originated in China, and is usually played by four players. There is a myth that the game was developed by the Chinese philosopher, Confucius. The myth also suggests that Confucius was fond of birds, and hence chose the name “sparrow”.

50. N.F.L. Hall-of-Famer Yale ___ : LARY
Yale Lary is a former football player from Fort Worth, Texas. Lary played college ball at Texas A&M and spent the whole of his professional career with the Detroit Lions.

56. Current measure : AMPERE
The unit of electric current is the ampere, abbreviated correctly to “A” rather than “amp”. It is named after French physicist André-Marie Ampère, one of the main scientists responsible for the discovery of electromagnetism.

58. Calvin Klein perfume : OBSESSION
Calvin Klein is an American fashion designer, born in the Bronx in New York City. Klein’s biography entitled “Obsession” takes its name from one of the most famous brands in his line of fragrances.

61. Mirage, maybe : OASIS
A mirage occurs when light rays are bent by passing say from cold air to warmer air. The most often cited mirage is a “lake” seen in a desert, which is actually the blue of the sky and not water at all. The word “mirage” comes to us via French from the Latin “mirare” meaning “to look at in wonder”. “Mirage” has the same root as our words “admire” and “mirror”.

67. Maureen Dowd piece : ESSAY
Maureen Dowd is a celebrated columnist for “The New York Times” as well as a best-selling author. Dowd won a Pulitzer for her columns about the Monica Lewinski scandal.

Down
1. Like some perfume : MUSKY
Musk has such an elegant connotation these days because of it’s use in the world of perfumery. However, its origin is not quite so glamorous. The original substance called musk, used in perfumes, was extracted from a gland in the rectal area of the male musk deer. The name “musk” is a Sanskrit word for “testicle”.

3. Jungle vine : LIANA
Liana is the name give to vines that generally grow in moist areas such as rain forests. They grow using the trees in the forest as structural support. My bet is that Tarzan swung from tree to tree on liana vines …

5. Spirit in a blue bottle : SKYY VODKA
Skyy Vodka is produced in the US, although the operation is owned by the Campari Group headquartered in Italy. Skyy first hit the shelves in 1992 when it was created by an entrepreneur from San Francisco, California.

8. Elusive legend : YETI
A yeti is a beast of legend, also called an abominable snowman. “Yeti” is a Tibetan term, and the beast is fabled to live in the Himalayan regions of Nepal and Tibet. Our equivalent legend in North America is that of Bigfoot, also known as Sasquatch. The study of animals whose existence have not yet been substantiated is called cryptozoology.

9. Dish made with garlic butter : SCAMPI
The Italian dish known as “scampi” is a serving of shrimp in garlic butter and dry white wine.

10. “The Merry Widow” composer : LEHAR
“The Merry Widow” is an operetta composed by Franz Lehar. It was first performed in 1905 and has been popular ever since. Franz Lehar was a Hungarian who had a difficult relationship with the Nazi regime after it took control of his country. His wife was born Jewish, but converted to Catholicism. Fortunately, Hitler enjoyed Lehar’s music and as a result Goebbels intervened and made Sophie Lehar “an honorary Aryan by marriage”.

26. 2012 Bond film … or a hint to six other Down answers in this puzzle : SKYFALL
I have not been a fan of Daniel Craig as James Bond (preferring Sean Connery and Pierce Brosnan in the role). However, I saw “Skyfall” the other day, and have been won over. “Skyfall” is one of the best Bond films so far, in my humble opinion …

29. Oil-rich region : ARABIA
The Arabian Peninsula is shaped like a boot, with the Sultanate of Oman occupying the toe of that boot and the country of Yemen occupying the heel.

31. Joint groove : DADO
In the world of joinery, a dado is a slot cut into a piece of wood across the grain. On the other hand, a “groove” is a slot that is cut with the grain.

37. Santa ___ (hot winds) : ANAS
Santa Ana is the county seat of Orange County, California and takes its name from the Santa Ana River that runs through the city. The Santa Ana winds are the very dry air currents that sweep offshore late in the year in Southern California. Because these air currents are so dry, they are noted for their influence over forest fires in the area, especially in the heat of the fall. The winds arise from a buildup of air pressure in the Great Basin that lies between the Rocky Mountains and the Sierra Nevada. Under the right conditions, that air spills over the peaks of the Sierra Nevada and basically “falls” down the side of the Sierra range, heading for the ocean. As the air falls it becomes drier and heats up, so that relative humidity can fall to below 10% by the time it hits the coast.

46. Big inits. for hunters : NRA
The National Rifle Association (NRA) used the slogan “I’ll give you my gun when you pry it from my cold, dead hands”. These words became quite famous when they were used at an NRA convention in 2000 by Charlton Heston, who was then president of the NRA. Heston ended a speech he made with the words “From my cold, dead hands!” while holding up into the air a replica of a Sharps rifle.

48. Good earth : LOESS
Loess is a wind-blown accumulation of silt. The word is German in origin and was first used to describe the silt along the Rhine Valley.

49. Triage areas, briefly : ERS
“Triage” is the process of prioritizing patients for treatment, especially on a battlefield. The term “triage” is French and means “a sorting”.

52. ___ Kane, Susan Lucci’s Emmy-winning role : ERICA
Susan Lucci is perhaps the most famous actor associated with daytime soap operas, and was the highest paid actor in daytime television. She was nominated for a Daytime Emmy Award as Outstanding Lead Actress in a Drama Series an incredible 21 times, for her role in “All My Children”.

55. Green critter in the Sinclair gas logo : DINO
Sinclair Oil has been around a long time as the company was founded back in 1916 by Harry F. Sinclair. Sinclair sponsored an exhibit at the Chicago World’s Fair in 1933-34 that focused on the Age of the Dinosaurs and the era’s relationship with the formation of petroleum products. The exhibit included a huge model of a brontosaurus that was a big hit with the fair’s attendees. Sinclair cashed in on the popularity of the dinosaur theme by selling rubber dinosaur toys at gas stations and eventually adopted the brontosaurus as part of the company logo.