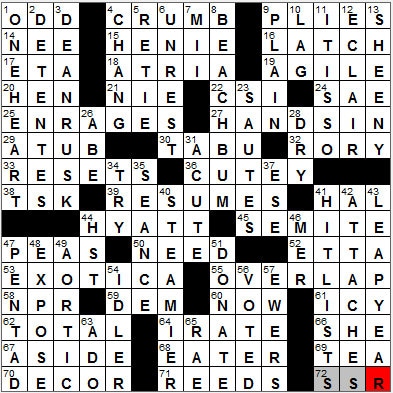 CROSSWORD SETTER: David J. Kahn
THEME: A Cute Accent … each of the theme answers is a word containing at least one “e acute” (é) accent, giving us six squares with letter “é” that are used both across and down answers:

Today’s Wiki-est, Amazonian Googlies
Across
9. Ballet dips : PLIÉS
The French word for “bent” is “plié”, and in the ballet move known as a plié, the knees are bent.

14. Once called : NÉE
“Née” is the French word for “born” when referring to a female. The male equivalent is “né”.

15. Skater Sonja : HENIE
Sonja Henie was a World and Olympic Champion figure skater from Norway, in the days when “amateur” sports stars were not paid. She made up for it in Hollywood, where she was one of highest paid stars at the height of her career.

17. Fraternity letter : ETA
Eta is the seventh letter of the Greek alphabet, and is a forerunner of our Latin character “H”.

18. Open courts : ATRIA
In modern architecture an atrium is a large open space, often in the center of a building and extending upwards to the roof. The original atrium was an open court in the center of an Ancient Roman house. One could access most of the enclosed rooms of the house from the atrium.

22. TV drama featuring Ted Danson as D. B. Russell : CSI
I’m told that the TV show “CSI” gets a lot of razzing by law enforcement professionals for its unrealistic portrayal of the procedures and science of criminal investigation. I don’t care though, as I just think it’s fun television. The original “CSI” set in Las Vegas seems to have “gone off the boil”, but the addition of Sela Ward to the cast of “CSI: NY” has really, really raised the level of the sister show centered around New York City.

24. MS. enclosure : SAE
A stamped addressed envelope (SAE) might be included with a manuscript (MS).

Hal Roach made a whole series of comedy shorts with “The Little Rascals”, also known as “Our Gang”. This very likable bunch of kids included Spanky and his kid brother, Porky. Porky had a speech impediment so he couldn’t pronounce “Okay, Spanky” very clearly and it came out as “Otay, Panky”.

30. Popular perfume : TABU
Tabu was a whole line of cosmetics and perfumes produced by the House of Dana. The company’s brand names were purchased by a Florida company called Dana Classic Fragrances in 1999.

32. Golfer McIlroy who won the 2011 U.S. Open : RORY
Rory McIlroy is an incredibly successful golfer from Northern Ireland. He is a young man and currently the world number one on the circuit, so folks can’t help but compare him to Tiger Woods.

39. Items in a personnel director’s in-box : RÉSUMÉS
A résumé is a summary of a person’s job experience and education and is used as a tool by a job seeker. In many countries, a résumé is equivalent to a curriculum vitae. “Résumé” is the French word for “summary”.

44. Grand ___ : HYATT
The Hyatt hotel chain takes its name from the first hotel in the group, that was purchased in 1957 i.e. Hyatt House at Los Angeles International Airport. Among other things, Hyatt is famous for designing the world’s first atrium hotel, the Hyatt Regency in Atlanta.

45. Israeli, e.g. : SEMITE
The word “Semitic” comes from the Greek for Shem, one of the three sons of Noah. A Semite is one of a large list of peoples, from the Assyrians and Babylonians to the Hebrews. The term “anti-Semite” however, almost always refer to anti-Jewish sentiment.

47. Snow ___ : PEAS
Snow peas are lovely vegetables, noted for having edible pods without that any inedible fiber.

52. ___ Candy, “Wonder Woman” character : ETTA
Etta Candy was introduced into Wonder Woman’s universe by DC Comics in 1942. She started out as a undernourished young woman that Wonder Woman encountered in a local hospital. The next time she appeared in the comics she was a rather rotund woman who claims to have been rejuvenated by eating candy. This was 1942 …

Wonder Woman first appeared in print in 1941, published by DC Comics. As she was created during WWII, Wonder Woman’s first foes were the axis powers. In the less realistic world her biggest foe was and still is Ares, named for the Greek mythological figure.

55. What circles in a Venn diagram do : OVERLAP
I must be pedantic and disagree here. Not all Venn diagrams overlap, but they usually do …

Englishman John Venn was an expert in the field of logic, and introduced the Venn diagram in his book “Symbolic Logic” in 1881. Venn diagrams are used in Set Theory, to illustrate the logical relationships between sets of variables.

58. Network with more than 900 stations : NPR
National Public Radio (now just called NPR) was launched in 1970 after President Johnson signed into law the Public Broadcasting Act of 1967. The intent of the act was to provide funding for radio and television broadcasting that wasn’t simply driven by profit. As a longtime fan of the state-funded BBC in the UK, I’d have to agree with that intent …

67. “Hey Jude” vis-à-vis “Revolution,” e.g. : ASIDE
“Hey Jude” was originally a song called “Hey Jules”, written by Paul McCartney. He wrote the original song for John Lennon’s son Julian, as a way of comforting the child during his parents divorce.

The recording and release of the Beatles song “Revolution” was very much driven by John Lennon. John was by then in a committed relationship with Yoko Ono, and well into the “revolutionary” phase of his life. One interesting thing to note about the original recording is the “scream” right at the start of the song. This had to come from Paul rather than John, because John couldn’t catch his breath after the scream in time to start into the song’s lyrics.

69. Leoni of “Tower Heist” : TÉA
Téa Leoni is an American actress. One of her early roles was in the great film “A League of Their Own” (a minor role, Racine at first base). She also played Sam Malone’s fiancee on “Cheers”. My favorite of her more prominent roles was as Jane, in “Fun with Dick and Jane”.

“Tower Heist” is a 2011 comedy film that I had hoped to see when it was playing in theaters, but I missed it. It stars Ben Stiller as an employee of an apartment building who loses his pension due to fraudulent investing activities by a Wall Street businessman. Stiller and his cohorts execute a heist to get back their money, and hilarity ensues (I am told).

72. Byelorussia, e.g.: Abbr. : SSR
The country that we now know as Belarus was called the Byelorussian Soviet Socialist Republic in the days of the Soviet Union.

Down
1. 2003 Celine Dion album : ONE HEART
French-Canadienne singer Céline Dion first came to international attention when she won the 1988 Eurovision Song Contest, representing Switzerland in the competition that was hosted in Dublin, Ireland.

2. Periods of de-escalation, perhaps : DÉTENTES
Détente is a French word meaning “loosening” and in general it’s used to describe the easing of strained relations in a political situation. In particular, the policy of détente came to be associated with the improved relations between the US and the Soviet Union in the seventies.

4. Former tennis star Michael : CHANG
Michael Chang is a former American professional tennis player, best remembered for his win at the 1989 French Open at the age of 17 years.

9. Bagel choice : PLAIN
The bagel was invented in the Polish city of Kraków in the 16th century. Bagels were brought to this country by Jewish immigrants from Poland who mainly established homes in and around New York City.

12. Patisserie treat : ÉCLAIR
The name for the pastry known as an éclair is clearly French in origin. The French word for lightning is “éclair”, but no one seems to be too sure how it came to be used for the rather delicious “temptation”.

35. Hand-holding event : SÉANCE
“Séance” is a French word used for a “sitting”.

40. More deserving of an R rating, say : STEAMIER
The Motion Picture Association of America’s (MPAA) film-rating system is purely voluntary and is not backed by any law. Movie theaters agree to abide by the rules that come with the MPAA ratings in exchange for access to new movies.

42. Some cases : ATTACHÉS
Attaché is a French term which literally means “attached”, and is used for a person who is assigned to the administrative staff of some agency or other service. The term is most recognized as it applies to someone assigned to an Ambassador’s staff at an embassy. The word was extended to “attaché case” at the beginning of the twentieth century, meaning a leather case used for carrying papers, perhaps by an attaché at an embassy.

44. 33rd prez : HST
Harry Truman wanted to go to West Point having served with the Missouri Army National Guard on active duty in WWI, but he couldn’t get in because of his poor eyesight. He didn’t have the money to pay for college anywhere else. He did manage to study for two years towards a law degree at the Kansas City Law School in the twenties, but he never finished his schooling. So, Harry S. Truman was the last US President (out of a list of ten) who did not have a college degree.

46. Outlet for une rivière : MER
In French, a river (rivière) empties into the sea (mer).

65. “Norma ___” : RAE
“Norma Rae” is a 1979 movie starring Sally Field as Norma Rae Webster in a tale of union activities in a textile factory in Alabama. The film is based on the true story of Crystal Lee Sutton told in a 1975 book called “Crystal Lee, a Woman of Inheritance”.