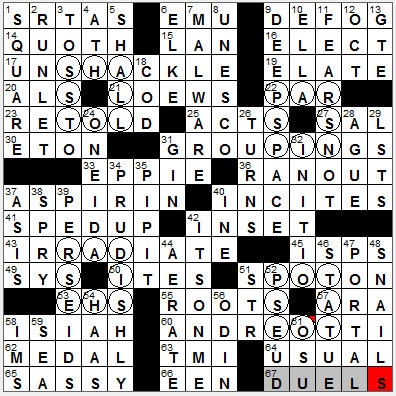 CROSSWORD SETTER: Peter Koetters
THEME: SQUARE ROOTS … the grid contains four sets of circled letters, each of which spells out a root vegetable neatly arranged in a square:

Today’s Wiki-est, Amazonian Googlies
Across
1. Mlles., across the border : SRTAS
Señorita (Srta.) is Spanish, and mademoiselle (Mlle.) is French for “miss”.

6. Big bird : EMU
The emu has had a tough time in Australia since man settled there. There was even an “Emu War” in Western Australia in 1932 when migrating emus competed with livestock for water and food. Soldiers were sent in and used machine guns in an unsuccessful attempt to drive off the “invading force”. The emus were clever, breaking their usual formations and adopting guerrilla tactics, operating as smaller units. After 50 days of “war”, the military withdrew. Subsequent requests for military help for the farmers were ignored. The emus had emerged victorious …

“The Raven” is a narrative poem by Edgar Allen Poe that tells of a student who has lost the love of his life, Lenore. A raven enters the student’s bedchamber and perches on a bust of Pallas. The raven can talk, to the student’s surprise, but says nothing but the word “nevermore”. As the student questions all aspects of his life, the raven taunts him with the same comment, “nevermore”. Finally the student decides that his soul is trapped beneath the raven’s shadow and shall be lifted “nevermore” …

15. PC connection : LAN
You may have a Local Area Network (LAN) in your house. If you’ve got a PC and a router or switch, likely attached to some modem, then you have a LAN.

20. Gore and Green : ALS
Al Gore was born in Washington DC, the son of Al Gore, Sr., then a US Representative for the state of Tennessee. After deferring his military service in order to attend Harvard, the younger Gore became eligible for the draft on graduation. Many of his classmates found ways of avoiding the draft, but Gore decided to serve and even took the “tougher” option of joining the army as an enlisted man. Actor Tommy Lee Jones shared a house with Gore in college and says that his buddy told him that even if he could find a way around the draft, someone with less options than him would have to go in his place and that was just wrong.

Al Green is a gospel and soul music singer. Green was born in Arkansas, where he started out as a gospel singer and moved into R&B. In 1974, he was assaulted by a girlfriend who burned him badly on much of his body by pouring boiling grits over him (and then she committed suicide). The incident changed Green’s life and he turned to the church, becoming a pastor in Memphis in 1976. He continued to record music, but never really enjoyed the same success that he had in the early seventies with hits like “Let’s Stay Together” and “I’m Still In Love With You”.

21. Cinema chain : LOEWS
Loews Theatres was a chain of movie theaters founded in 1904 by Marcus Loew and Brantford Schwartz. The chain merged with AMC Theaters in 2006.

27. Frivolous gal of song : SAL
“My Gal Sal” is a song written by composer Paul Dresser. “My Gal Sal” is also the name of the movie recounting Dresser’s life made in 1942. It stars Victor Mature as Dresser, and Rita Hayworth as Sally “Sal” Elliott.

30. Aldous Huxley’s school : ETON
Aldous Huxley was a writer from England whose best-known work is the novel “Brave New World”. Huxley was noted for his interest in parapsychology and mysticism, as well as for his promotion of the idea of taking psychedelic drugs “in a search for enlightenment”.

33. “Silas Marner” girl : EPPIE
“Silas Marner: The Weaver of Raveloe” is a novel written by George Eliot and first published in 1861. Eppie is a young, orphaned child that Marner takes under his wing. There’s an excellent BBC TV version of the tale (shown on PBS) starring Ben Kingsley in the title role, with Patsy Kensit playing Eppie.

37. Trademark of 1899 that’s no longer protected : ASPIRIN
Aspirin was a brand name for the drug acetylsalicylic acid. Aspirin was introduced by the German drug company Bayer AG in the late 1800s. As part of the war reparations paid by Germany after WWI, Bayer AG lost the use of the trademark “Aspirin” (and the trademark “Heroin”!) and it became a generic term.

45. Connections to the WWW : ISPS
An Internet Service Provider (ISP) is just what the name indicates, a company that provides its customers with access to the Internet. One way that ISPs differentiate themselves from each other is in the way in which end users are connected to the ISP’s network. So, there are cable ISPs, DSL ISPs, dial-up ISPs and satellite ISPs. I’d go with cable if I were you, if it’s available in your area …

49. S.S.S. part: Abbr. : SYS
The Social Security Administration (SSA) was of course set up as part of President Franklin D. Roosevelt’s New Deal. The first person to receive a monthly retirement benefit was Ida May Fuller of Vermont who received her first check for the sum of $22.54 after having contributed for three years through payroll taxes. The New Deal turned out to be a good deal for Ms. Fuller, as she lived to 100 years of age and received a total benefit of almost $23,000, whereas her three years of contributions added up to just $24.75.

58. Hoops Hall-of-Famer Thomas : ISIAH
Isiah Thomas played his whole professional basketball-playing career with the Detroit Pistons, and he is now the head coach with Florida International University’s Golden Panthers. When you’re out shopping for popcorn, keep an eye out for the Dale &Thomas brand, as it’s co-owned by Isiah Thomas.

60. Italian P.M. nicknamed Divo Giulio : ANDREOTTI
Giulio Andreotti served as the Prime Minister of Italy for periods in the 1970s, 1980s and 1990s. Some call Andreotti “Divo Giulio”  which means “Divine Giulio”. The nickname is a play on “Divine Julius”, an epithet for Julius Caesar.

63. Excessive detail, in a text : TMI
Too Much Information (TMI)!

65. Smart-alecky : SASSY
Apparently the original “smart Alec” was Alec Hoag, a pimp, thief and confidence trickster who plied his trade in New York City in the 1840s.

67. Hamilton vs. Burr and others : DUELS
Aaron Burr was the third vice-president of the US, serving under Thomas Jefferson. In the final year of his term in office, Burr fought an illegal duel and killed his political rival Alexander Hamilton. Burr wasn’t brought to justice, but he did pay the price politically. Thomas Jefferson dropped him from his ticket in the election held the following year.

Down
4. Greek capital, to airlines : ATH
ATH is the airport code for Athens International Airport in Greece.

6. Sommer of film : ELKE
Elke Sommer is a German-born actress who was at the height of her success on the silver screen in the sixties. Sommer won a Golden Globe as Most Promising Newcomer Actress for her role opposite Paul Newman in 1964’s “The Prize”. She also sings and has released several albums. Now Sommer focuses on painting, producing artwork that is strongly influenced by the great Marc Chagall.

8. Intl. peace and human rights grp. : UNESCO
The United Nations Educational, Scientific and Cultural Organization is better known by the acronym “UNESCO”. UNESCO’s mission is help build peace in the world using programs focused on education, the sciences, culture, communication and information. The organization’s work is aimed in particular at Africa, and gender equalization.

10. First name in scat : ELLA
Scat singing is a vocal improvisation found in the world of jazz. There aren’t any words as such in scat singing, just random nonsense syllables made up on the spot.

12. Thanksgiving mo., in Canada : OCT
The Canadian Thanksgiving holiday predates the related celebration in the US. The first Canadian Thanksgiving was held in 1578 by an explorer from England named Martin Frobisher. Frobisher was giving thanks for his safe arrival in the New World, and made the observance in the month of October as this was a tradition in England. All this happened 43 years before the pilgrims landed in Plymouth, Massachusetts.

13. Co. that merged into Verizon : GTE
GTE was a rival to AT&T, the largest of the independent competitors to the Bell System. GTE merged with Bell Atlantic in 2000, forming the company that we know today as Verizon.

24. Five Nations tribe : ONEIDA
The Oneida people originally lived in the area that is now Central New York. The Oneida were one of the five founding nations of the Iroquois Confederacy, also known as the Five Nations (the Mohawk, Oneida, Onondaga, Cayuga and Seneca).

28. Malaria symptom : AGUE
Malaria is a disease passed onto humans by mosquitoes. As a result of the disease, a parasite invades human red blood cells and multiplies causing fever and possibly coma or death. Over 750,000 people died from malaria in 2009, out of 225 million cases reported.

29. Normandy vessels of ’44 : LSTS
LST stands for Landing Ship, Tank. LSTs were the large vessels used mainly in WWII that had doors at either ends through which tanks and other vehicles could roll off and onto beaches. The design concept persists to this day in the huge fleet of commercial roll-on/roll-off car ferries, all inspired by the LST.

31. Martini base, maybe : GIN
The name “martini” probably takes it name from the “Martini & Rossi” brand of dry vermouth, although no one seems to be completely sure. What is clear, is that despite the Martini name originating in Italy, the martini drink originated in the US.

35. Larklike songbird : PIPIT
Pipits are small birds found almost everywhere on the globe, except the driest of deserts, the wettest of rainforests and Antarctica.

52. Pretentious sort : PSEUD
A pseudo (or “pseud”) is an artificial or pretentious person.

54. Lukas of “Witness” : HAAS
Lukas Haas is an American actor, best known for the role he played as an 8-year-old child in the excellent 1985 film “Witness”. In “Witness” Haas played a young Amish boy, alongside Harrison Ford and Kelly McGillis. Although Haas still acts today, he is also a musician and plays drums and piano for a band called The Rogues.

56. Asgard ruler : ODIN
In Norse mythology, Odin was the chief of the gods. Odin’s wife Frigg was the queen of Asgard whose name gave us our English term “Friday” (via Anglo-Saxon). Odin’s son was Thor, and his name gave us the term “Thursday”.

59. Chantey subject : SEA
A sea shanty (also “chantey”) is a song sung by sailors, often when they are working away on some repetitive task.

61. The Cowboys of the N.C.A.A. : OSU
The athletic teams of Oklahoma State University are called the Cowboys, and the Cowgirls.