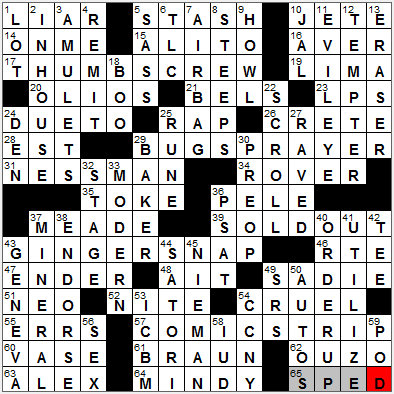 CROSSWORD SETTER: Robert W. Harris
THEME: A Second Look … if we look twice at each of the theme answers we see that they can be read two ways:

17A. Index, middle, ring and pinkie fingers? : THUMB’S CREW (from THUMBSCREW)
29A. “Lord, make me impervious to Raid”? : BUG’S PRAYER (from BUG SPRAYER)
43A. Reason everyone whispered during the afternoon on Gilligan’s island? : GINGER’S NAP (from GINGER SNAP)
57A. Excursion for Jerry Seinfeld or Chris Rock? : COMIC’S TRIP (from COMIC STRIP)


Today’s Wiki-est, Amazonian Googlies
Across
1. When repeated, a hit 1997 movie : LIAR
The full rhyme used by children to deride someone not telling the truth is:

10. Ballet leap : JETE
A jeté is a leap in ballet, coming from the French word “jeter” meaning “to throw”.

15. Justice who took O’Connor’s seat on the Supreme Court : ALITO
Associate Justice Samuel Alito was nominated to the US Supreme Court by President George W. Bush. Alito is the second Italian-American to serve on the Supreme Court (Antonin Scalia was the first). Alito studied law at Yale and while in his final year he left the country for the first time, heading to Italy to work on his thesis about the Italian legal system.

Sandra Day O’Connor is a former Associate justice on the US Supreme Court. O’Connor was the first woman appointed to the court, and was in office from 1981 after being appointed by President Reagan. As the court became more conservative she was viewed as the swing vote in many decisions. As a result, O’Connor was known as one of the most powerful women in the world. She retired in 2006 (replaced by Samuel Alito), and was awarded the Presidential Medal of Freedom by President Obama in 2009.

17. Index, middle, ring and pinkie fingers? : THUMB’S CREW (from THUMBSCREW)
The use of “pinkie” comes into English from “pinkje”, the Dutch word for the little finger. Who knew?

19. City founded by Pizarro in 1535 : LIMA
Lima is the capital city of Peru. Lima was founded in 1535 by the Spanish conquistador Francisco Pizarro, who named it “la Ciudad de los Reyes” (the City of Kings). Pizarro chose this name because the decision to found the city was made on January 6th, the feast of the Epiphany that commemorates the visit of the three kings to Jesus in Bethlehem.

20. Hodgepodges : OLIOS
Olio is a term meaning a hodgepodge or a mixture, coming from the mixed stew of the same name. The stew in turn takes its name from the Spanish “olla”, the clay pot used for cooking.

21. Loudness units : BELS
In the world of acoustics, one bel is equal to ten decibels.

26. Location of the Labyrinth of Minos : CRETE
Minos was the King of Crete in Greek mythology, and the son of Zeus and Europa. Minos had an elaborate labyrinth built under the island, designed by the architect Daedalus and his son Icarus (who famously died trying to escape from the island by “flying” away). In the labyrinth, King Minos kept the Minotaur, a dreadful creature with the head of a bull on the body of a man.

31. WKRP’s Les : NESSMAN
Les Nessman is a character in the sitcom “WKRP in Cincinatti”. Nessman is the shy balding guy who always wears a bow tie.

35. Puff : TOKE
“Toke” is a slang term for a puff on a marijuana cigarette or on a pipe containing the drug.

36. Edson Arantes do Nascimento, to fans : PELE
Pelé is the nickname of Edison de Nascimento, a soccer player who has used the name Pelé for most of his life.  Pelé is now retired, and for my money was the world’s greatest ever player of the game. He is the only person to have been part of three World Cup winning squads, and is a national treasure in his native Brazil.

37. Victor at Gettysburg : MEADE
George Meade was a career army officer with a depth of experience in civil and military operations even before the onset of the Civil War. During the war he rose to the level of commander of the Army of the Potomac, and is best remembered for leading the Union forces that defeated General Robert E. Lee at Gettysburg in 1863.

43. Reason everyone whispered during the afternoon on Gilligan’s island? : GINGER’S NAP (from GINGER SNAP)
“Ginger snap cookies” are known as “ginger nut biscuits” back in Ireland where I come from.

The actress Tina Louise is best known for having played the character Ginger Grant on the iconic TV show “Gilligan’s Island”. Louise had been a celebrated pinup girl in the late fifties, but her goal was to be an actress. She took the role of Ginger on “Gilligan’s Island” in 1964, after it was turned down by none other than Hollywood legend Jayne Mansfield.

46. MapQuest abbr. : RTE
MapQuest is a very popular Internet site, one that provides driving directions and maps. MapQuest is actually owned by AOL.

48. Thames island : AIT
Aits are little islands found in a river. Aits aren’t formed by erosion, but by the deposition of silt over time. As a result, aits often have a long and narrow shape running parallel to the banks as the sediment builds up with the flow of the water. Many of the islands in the River Thames in England have been given the name “Ait”, like Raven’s Ait in Kingston-upon-Thames, and Lot’s Ait in Brentford.

49. ___ Hawkins Day : SADIE
Sadie Hawkins was a character in Al Capp’s comic strip “Li’l Abner”. Sadie was still a spinster at the age of 35 so declared a “Sadie Hawkins Day” in which she chased the local men in a footrace, with marriage as the prize when one was caught.

54. Steve Martin’s “___ Shoes” : CRUEL
“Cruel Shoes” is a collection of short stories and essays written by Steve Martin, first published in 1977. I haven’t read them, but I hear the stories are pretty offbeat and funny.

57. Excursion for Jerry Seinfeld or Chris Rock? : COMIC’S TRIP (from COMIC STRIP)
Jerry Seinfeld made his fortune appearing in his own “Seinfeld” sitcom, which he created with Larry David. The show was so successful that Seinfeld was the highest-paid celebrity in 1998, earning $267 million from the show. Seinfeld quit after the ninth season, walking away from an offer to continue for $5 million per episode.

61. Norelco competitor : BRAUN
Braun is a manufacturer of consumer goods based in Kronberg, Germany.

Norelco is a brand of shavers and personal care products made by Philips. The brand name was introduced as the company was barred from using “Philips” in the US in the early 1940s. The name Norelco was chosen as an acronym for “NOR-th American Philips EL-ectrical CO-mpany.

62. Anise-flavored liqueur : OUZO
Ouzo is an aperitif from Greece that is colorless and flavored with anise. Ouzo is similar to pastis from France, and also has a flavor like sambuca from Italy.

The essential oil in the anise plant is anethole. Anethole has a licorice-like flavor, and is used extensively in cooking.

63. ___ Cross, James Patterson detective : ALEX
Author James Patterson is known for his thriller novels, especially those featuring his forensic psychologist Alex Cross. Patterson holds the record for the most hardcover fiction titles to appear in “The New York Times” bestseller list … 63 so far!

64. Mork’s pal : MINDY
Pam Dawber is the actress who teamed up with Robin Williams to play the lead roles in the sitcom “Mork & Mindy”. Dawber is married to actor Mark Harmon.

Down
5. Lip : SASS
“Sass”, meaning “impudence”, is a back formation from the word “sassy”. “Sassy” is an alteration of the word “saucy”, with “sassy” first appearing in English in the 1830s.

6. It’s owned by Discovery Communications : TLC
The cable channel known today as TLC started out life as The Learning Channel. Programming on TLC was originally focused on educational content, but today there is an emphasis on programming imported from the UK.

10. Tokyo-based carrier : JAL
Japan Airlines (JAL) is the flag carrier of Japan, and is an airline that has been around since 1951.

11. Whammy : EVIL EYE
“Whammy” is a slang term for a hex, a supernatural spell.

25. Letter to Odin? : RUNE
A rune is a character in an alphabet that is believed to have mysterious powers.

In Norse mythology, Odin was the chief of the gods. His wife Frigg was the queen of Asgard whose name gave us our English “Friday” (via Anglo-Saxon). Odin’s son was Thor, and his name gave us “Thursday”.

29. Tub trio member : BAKER
The nursery rhyme “Rub-a-Dub-Dub” dates back to at least 1798 when it was first published in London:

32. All the world, it’s said : STAGE
In the play “As You Like It”, there is a speech that yields one of the most-quoted phrases written by William Shakespeare, namely “all the world’s a stage”:

33. Like Cubism and Pop Art : MODERN
In the art movement known as Cubism, objects which are the subject of a painting are broken up and reassembled in an abstract form. The pioneers of the Cubist movement were Pablo Picasso and Georges Braque.

An artistic work in the Pop Art style includes images taken from popular culture, perhaps from the news or an advertisement. The pop art movement started in the mid-fifties in Britain and emerged in the late-fifties in the US.

37. Feldspar, e.g. : MINERAL
The minerals known as feldspars are found in many types of rocks, and in fact make up about 60% of the earth’s crust. As a former ceramic engineer, I know full well how important feldspars are in the manufacture of ceramics. Feldspars melt at low temperatures and form essential glass phases in the final ceramic product.

44. Buddhist state : SATORI
Satori is a Japanese term, used in the Zen Buddhist tradition. Satori does not refer to full enlightenment (nirvana) but rather is a step along the way, a flash of awareness.

53. Nuclear weapon delivery device, for short : ICBM
An Intercontinental Ballistic Missile (ICBM) is a ballistic missile with the range necessary to cross between continents. Being ballistic (as opposed to a cruise missile) it is guided during the initial launch phase, but later in flight just relies on thrust and gravity to arrive at its target. It is defined as intercontinental as it has a range greater that 3,500 miles. ICBMs are really only used for delivering nuclear warheads. Scary stuff …

58. Alternative to the pill, briefly : IUD
It seems that it isn’t fully understood how intrauterine devices (IUDs) work as a means of birth control. The design that has been most popular for decades is a T-shaped plastic frame on which is wound copper wire. It’s thought that the device is an irritant in the uterus causing the body to release chemicals that are hostile to sperm and eggs. This effect is enhanced by the presence of the copper.