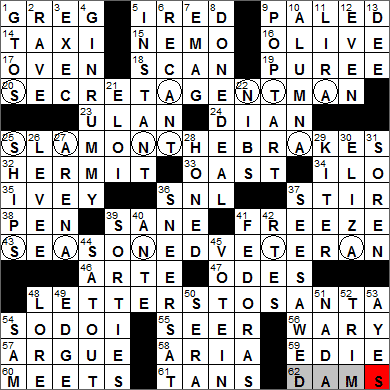 Today’s Wiki-est, Amazonian Googlies
Across
1. Kinnear of “Little Miss Sunshine” : GREG
Greg Kinnear is a favorite actor of mine, probably best recognized for his Oscar-nominated performance in the excellent film “As Good as it Gets” from 1997.

15. Verne captain : NEMO
In the 1954 movie version of “20,000 Leagues Under the Sea”, Captain Nemo goes down with his ship. In the novel by Jules Verne the fate of Nemo and his crew isn’t quite so cut and dry, although the inference is perhaps that they did indeed head for Davy Jones’ Locker.

20. 1966 Johnny Rivers hit : SECRET AGENT MAN
I saw Johnny Rivers perform for the first time a few summers ago at our local county fairgrounds, and he puts on a great show. The big hit for Johnny Rivers was “Secret Agent Man”, a song written especially for the opening title of the British TV show “Danger Man” when it was broadcast over here in America in the sixties (remember that one, starring Patrick McGoohan?).

23. ___ Bator : ULAN
The name “Ulan Bator” translates from Mongolian as “the Red Hero”, and is Mongolia’s capital city. The “Red Hero” name was chosen in honor of the country’s national hero, Damdin Sükhbaatar. Sükhbaatar fought alongside the Soviet Red Army in the fight for liberation from Chinese occupation.

24. Anthropologist Fossey : DIAN
Dian Fossey carried out her famous study of gorilla populations in the mountain forests of Rwanda (NB: it was Jane Goodall that worked with chimpanzees). Sadly, Fossey was found dead in her cabin in Rwanda in 1986, murdered in her bedroom, her skull split open by a machete. The crime was never solved.

32. ___ crab : HERMIT
Hermit crabs are so called because they “live alone” in an abandoned shell, usually one that originally housed a sea snail. The crab uses the shell to protect its soft abdomen. Instead of shells, hermit crabs have been found dragging around hollow stones or even hollowed out pieces of wood.

33. Malt-drying 17-Across : OAST
An oast is a kiln used for drying hops as part of the brewing process. Such a structure might also be called an “oast house”.

34. World workers’ assn. : ILO
The ILO (International Labour Organization) is an agency now administered by the UN which was established by the League of Nations after WWI. The ILO deals with important issues such as health and safety, discrimination, child labor and forced labor. The organization was recognized for its work in 1969 when it was awarded the Nobel Peace Prize.

35. Judith of “The Devil’s Advocate,” 1977 : IVEY
Judith Ivey is an actress from El Paso, Texas. Ivey is perhaps best known for playing B. J. Poteet in the last season of the TV show “Designing Women”.

37. Prison, informally : STIR
The slang word “stir”, meaning a prison, probably has its roots in Start Newgate prison in London, where it was a nickname for the establishment.

46. El Prado works : ARTE
The Museo del Prado is in Madrid, the capital of Spain, and has one of the finest art collections in the world. The gallery’s most famous work is “Las Meninas” By Velazquez.

58. Diva’s delivery : ARIA
“Diva” comes to us from Latin via Italian. “Diva” is the feminine form of “divus” meaning “divine one”. The word is used in Italy to mean “goddess” or “fine lady”, and especially is applied to the prima donna in an opera. We often use the term to describe a singer with a big ego.

62. Beavers build them : DAMS
Beavers build dams so that they can live in and around the slower and deeper water that builds up above the dam. This deeper water provides more protection for the beavers from predators such as bears. Beavers are nocturnal animals and do all their construction work at night.

2. Four-star piece, say : RAVE
A rave review from a critic might include a four-star rating.

4. Game with sets and runs : GIN RUMMY
Gin rummy is a variant of the slower game of standard rummy and was introduced in 1909 by Elwood Baker and his son.

9. Kellogg’s snack since 1964 : POP-TART
Pop-Tart is the most successful brand for the Kellogg company, as millions are sold every year. The US Military bought quite a few in 2001, and dropped 2.4 million Pop-Tarts into Afghanistan during the invasion after 9/11.

10. Bryn Mawr grad, e.g. : ALUMNA
An “alumnus” (plural … alumni) is a graduate or former student of a school or college. The female form is “alumna” (plural … alumnae). The term comes into English from Latin, in which alumnus means foster-son or pupil.

I used to live not far from Bryn-mawr (also “Brynmwar”) in Wales, the town with the highest elevation in the country. Appropriately enough, “bryn mawr” is Welsh for “big hill”. There is also a Bryn Mawr in Pennsylvania (note the different capitalization) that is named after its Welsh counterpart. At the Pennsylvania location there’s a Brynn Mawr college, a private women’s school that was the first American university to offer graduate degrees to women.

11. Old currency abbreviated “L.” : LIRA
The name “lira” is used in a number of countries for currency. “Lira” comes from the Latin word for a pound and is derived from a British pound sterling, the value of a Troy pound of silver. The lira (plural “lire”) was the official currency of Italy before the country changed over to the euro.

13. Actor Billy ___ Williams : DEE
Billy Dee Williams is the actor who played the character Lando Calrissian in two of the “Star Wars” movies.

21. Race in an H. G. Wells novel : ELOI
In the 1895 novel by H. G. Wells called “The Time Machine”, there are two races that the hero encounter in his travels into the future. The Eloi are the “beautiful people” who live on the planet’s surface. The Morlocks are a race of cannibals living underground who use the Eloi as food.

25. Armada units : SHIPS
The most famous Armada was the Spanish fleet that sailed against England in order to overthrow Queen Elizabeth I in 1588. It failed in its mission, partly due to bad weather encountered en route. Ironically, the English mounted a similar naval attack against Spain the following year, and it failed as well.

26. Corps of Engineers project : LEVEE
A levee is an artificial bank, usually made of earth, running along the length of a river. A levee is designed to hold back the river water at a time of potential flooding. “Levée” is the French word for “raised” and is an American term that originated in French-speaking New Orleans around 1720.

31. Philosopher Kierkegaard : SOREN
Soren Kierkegaard was a Danish philosopher and theologian, and I never really understood anything that he wrote!

39. Combat pilots’ missions : SORTIES
A sortie is an attack by an armed unit, usually a breakout by forces that are besieged, The term “sortie” comes directly from French and means “a going out”. “Sortie” is also used for a mission by a combat aircraft.

40. Stud fee? : ANTE
Stud poker is the name given to many variants of the card game, all characterized by the dealer giving each player a mix of cards face-down and face-up. The cards facing downwards are called “hole cards”, cards only visible to the individual who holds that particular hand. That gives rise to the phrase “ace in the hole”, a valuable holding of which only that player is aware.

41. Felt toppers : FEDORAS
A fedora is a lovely hat, I think. It is made of felt and is similar to a trilby, but has a broader brim. “Fedora” was a play written for Sarah Bernhardt and first performed in 1889. Bernhardt had the title role of Princess Fedora, and on stage she wore a hat similar to the modern-day fedora. The play led to the introduction of a women’s fashion accessory, the fedora hat, commonly worn by women into the beginning of the twentieth century. Men then started wearing fedoras, but only when women gave up the idea …

42. GPS suggestions: Abbr. : RTES
GPS stands for Global Positioning System. The modern GPS system that we use today was built by the US military who received the massive funding needed because of fears during the Cold War of the use of Intercontinental Ballistic Missiles. We civilians, all round the world, owe a lot to President Ronald Reagan because he directed the military to make GPS technology available to the public for the common good. President Reagan was moved to do so after the Soviet Union shot down KAL flight 007 carrying 269 people, just because the plane strayed accidentally into Soviet airspace.

54. Texas patriot Houston : SAM
Sam Houston was the first President of the Republic of Texas, a US Senator for Texas, as well as governor of the state. Houston was also governor of Tennessee in his earlier life and is the only person in US history to have been governor of two different states. The city of Houston is of course named for Sam, and the city boasts a statue of Houston that’s the largest free-standing statue of any American.