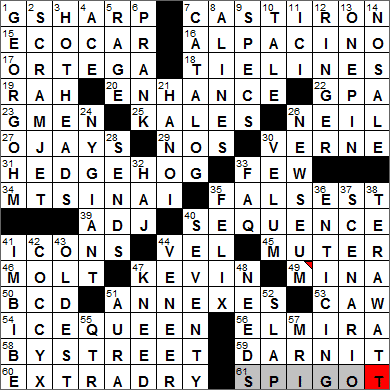 Today’s Wiki-est, Amazonian Googlies
Across
16. Oscar-nominated player of Sonny Wortzik : AL PACINO
“Dog Day Afternoon” is a crime film released in 1975. The movie was inspired by a real life incident, a robbery at a bank in Brooklyn, New York by John Wojtowicz and Salvatore Naturile. Al Pacino and John Cazale played the robbers in the film, with the names changed to Sonny Wortzik and Sal Naturile.

17. Salsa brand : ORTEGA
The Ortega food manufacturing company has been around for about 150 years. It was founded by Maria Concepcion Jacinta Dominguez Ortega, known affectionately as Mama Ortega within the company.

18. Telephone connectors : TIE LINES
A tie line is a connection between extensions of a private telephone system. A tie line may also be called a tie trunk.

23. 1935 Cagney crime film : G MEN
The nickname “G-men” is short for “Government Men” and refers to agents of the Federal Bureau of Investigation.

“G Man” is a 1935 crime film starring James Cagney. It was one of the most successful films at the box office in the year of its release. “G Man” was re-released in 1949 on the occasion of the 25th anniversary of the FBI.

25. Rich sources of vitamin K : KALES
Vitamin K is actually a group of vitamins that are essential to the process of blood coagulation. A form of vitamin K is also involved in photosynthesis in plants so green leafy vegetables are the best source for the vitamin for humans.

26. Diamond with many cuts : NEIL
I saw Neil Diamond in concert about 15 years ago, and I must say he does put on a great show. His voice is cracking a bit, but that didn’t seem to spoil anyone’s enjoyment. I’ve also seen Diamond interviewed a few times on television, and I wouldn’t say he has the most scintillating personality.

27. “Use ta Be My Girl” group, with “the” : O’JAYS
The O’Jays are an R&B group from Canton, Ohio. They came together in 1963 as a band of five singers and are still performing today, although now only as a trio. The band took the name of the O’Jays as a tribute to a radio disk jockey called Eddie O’Jay who was big in Cleveland at the time they were starting out. The biggest hit for the O’Jays is “Love Train”, from 1973.

30. Seminal name in science fiction : VERNE
Jules Verne really was a groundbreaking author. Verne pioneered the science fiction genre, writing about space, air and underwater travel, long before they were practical and proved feasible. Verne is the second most translated author of all time, with only Agatha Christie beating him out.

31. Mr. Pricklepants in “Toy Story 3,” e.g. : HEDGEHOG
I haven’t seen Pixar’s “Toy Story 3”, but I hear it is excellent. “Toy Story 3” is so successful that it is now the highest-grossing animated film of all time and has brought in over a billion dollars worldwide. The character in the movie called Mr. Pricklepants is a hedgehog, voiced by British actor Timothy Dalton (who played the lead in two James Bond movies inthe late eighties).

34. Pentateuch peak : MT SINAI
According to the Bible, Mount Sinai is the mountain on which Moses was given the Ten Commandments. The Biblical Mount Sinai is probably not the mountain in Egypt that today has the same name, although this is the subject of much debate. The Egyptian Mount Sinai has two developed routes that one can take to reach the summit. The longer gentler climb takes about 2 1/2 hours, but there is also the steeper climb up the 3,750 “steps of penitence”.

“The Pentateuch” is the name given to the first five books of the Hebrew Bible.

46. Experience ecdysis : MOLT
“Ecdysis” is a process of molting in invertebrate animals, an example being a crab’s shedding of its exoskeleton. The term arises from the Greek “ekduo” meaning “to strip off”.

47. One of the Jonas brothers : KEVIN
A young neighbor of mine went to see the Jonas Brothers in concert not so long ago. She came home swooning …

53. Unpleasant sound in nature : CAW
A caw is the harsh cry of a crow.

54. Woman who’s hard to reach : ICE QUEEN
I think the reference is to the slang term “ice queen” used for a particularly cold-hearted woman.

56. Seat of New York’s Chemung County : ELMIRA
Elmira is a city in the southern tier of New York State located closed close to the border with Pennsylvania. Elmira was the location of a prisoner-of-war camp during the Civil War, one that was labelled “Hellmira” by those incarcerated within.

60. Like some martinis : EXTRA DRY
The name “martini” probably takes it name from the “Martini & Rossi” brand of dry vermouth, although no one seems to be completely sure. What is clear is that despite the Martini name originating in Italy, the martini drink originated in the US. The original martini was made with gin and sweet vermouth, but someone specifying a “dry” martini was given gin and dry vermouth. Nowadays we use dry vermouth for all martinis and the term “dry” has become a reference to how little vermouth is included in the drink. Famously, Noel Coward liked his drink very dry and said that a perfect martini is made by “filling a glass with gin then waving it in the general direction of Italy”.

Down
1. German resistance leader? : GEORG OHM
The unit of electrical resistance is the ohm (with the symbol omega) named after Georg Simon Ohm, the German physicist. Ohm was the guy who established experimentally that the amount of current flowing through a circuit is directly proportional to the voltage applied, (V=IR) a relationship that every school kid knows as Ohm’s Law.

2. Boeing X-51 engine, e.g. : SCRAMJET
A “ramjet” is a type of jet engine that uses the speed of the incoming air (due to the aircraft’s forward motion) to compress that air prior to combustion. In a regular jet engine, the air is compressed by a fan that sucks air into the combustion chamber. In a ramjet, air enters the chamber usually at supersonic speed (the speed of the jet) and is slowed prior to combustion. In a scramjet, a variant of a ramjet, the air is maintained at supersonic speeds, allowing the scramjet to operate at very high velocity.

8. Wear with flares : A-LINES
An A-line skirt is one that fits snugly at the hips and flares toward the hem.

11. Where you may be in France : ICI
“Vous êtes ici” are important words to know when navigating your way around Paris. They mean “You are here”, and you’ll often see them on maps in the street.

12. Player who’s way too good, say : RINGER
A “ringer” was originally a fast horse that was substituted surreptitiously into a race for a slower one. The term was derived from the verb “to ring in”, meaning to substitute.

13. Part of a lane arrangement : ONE-PIN
Bowling has been around for an awfully long time. The oldest known reference to the game is in Egypt, where pins and balls were found in an ancient tomb that is over 5,000 years old. The first form of the game to come to America was nine-pin bowling, which had been very popular in Europe for centuries. In 1841 in Connecticut, nine-pin bowling was banned due to its association with gambling. Supposedly, an additional pin was added to get around the ban, and ten-pin bowling was born.

21. Bank of ___ (institution the A-Team was jailed for robbing) : HANOI
“The A-Team” is an action television series that originally ran in the eighties. The A-Team was a group of ex-US special forces personnel who became mercenaries. Star of the show was Hollywood actor George Peppard, ably assisted by Mr. T and Robert Vaughan.

26. Washington attraction with a punny name : NEWSEUM
The Newseum is a museum devoted to news and journalism that is located in Washington, D.C. The Newseum has been in the nation’s capital since 2008, having moved from its original location in Arlington, Virginia.

32. Fifth pillar of Islam : HAJ
“Haji” is the term used for someone who has made a pilgrimage to Mecca, and the term is sometimes also used as a form of address for such a person. The journey itself goes by the name “haj” or “hadj”.

33. Newbie’s resource : FAQ
Most websites have a page listing answers to Frequently Asked Questions (FAQ). There is a link to the NYTCrossword’s blog’s FAQ page at the top right of every page.

35. Cartoon character that was one of the first images transmitted on TV : FELIX
Felix the Cat is a cartoon character who dates back to the era of silent movies. A papier-mâché model of Felix was used in one of the first ever broadcasts of a television image, in 1928. At that time, RCA was using a Felix doll in experimental transmissions in New York.

36. Like sirens : ENTICING
In Greek mythology, the Sirens were seductive bird-women who lured men to their deaths with their song. When Odysseus sailed closed to the island home of the Sirens he wanted to hear their voices, but in safety. He had his men plug their ears with beeswax and then ordered them to tie him to the mast and not to free him until they were safe. On hearing their song Odysseus begged to be let loose, but the sailors just tightened his bonds and and the whole crew sailed away unharmed.

40. Ytterbium’s atomic number : SEVENTY
The chemical element Ytterbium was first isolated by the Swiss chemist Jean Charles Galissard de Marignac. He named his discovery Ytterbium after the Swedish village of Ytterby where he made his discovery.

42. Sacrum neighbor : COCCYX
The human coccyx is what is left of a tail that our evolutionary ancestors possessed.

57. Anatomy test, briefly? : MRI
A CT (or “CAT”) scan produces (via computer manipulation) a three dimensional image of the inside of an object, usually the human body. It does so by taking a series of two dimensional x-ray images while rotating the camera around the patient. The issue with CT scans is that they use x-rays, and high doses of radiation can be harmful causing damage that is cumulative over time. An MRI on the other hand (Magnetic Resonance Imaging), uses powerful magnetic fields to generate its images so there is no exposure to ionizing radiation (such as X-rays). We used MRI equipment in our chemistry labs at school, way back in the days when the technology was still called Nuclear Magnetic Resonance Imaging (NMRI). Apparently the marketing folks didn’t like the term “nuclear” because of its association with atomic bombs, so now it’s just called MRI.