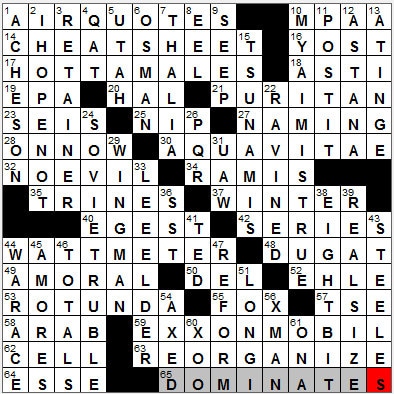 CROSSWORD SETTER: Milo Beckman
THEME: None
COMPLETION TIME: Did not finish!
ANSWERS I MISSED: Several in the top left

Today’s Wiki-est, Amazonian Googlies
Across
1. Sarcasm indicator : AIR QUOTES
“Air quotes” are those gestures that some make with their fingers to emphasis sarcastically a particular word or phrase.

10. Rating org. : MPAA
The Motion Picture Association of America’s (MPAA) film-rating system is purely voluntary and is not backed by any law. Movie theaters agree to abide by the rules that come with the MPAA ratings in exchange for access to new movies.

16. Baseball’s Eddie who was nicknamed “The Walking Man” : YOST
Eddie Yost was a professional third baseman and coach. As a batter, Yost was known for getting on base with walks, earning him the nickname the “Walking Man”.

18. Vino place : ASTI
Asti is in the Piedmont region of northwest Italy. The region is perhaps most famous for its Asti Spumante sparkling white wine.

20. Speaker of the film line “This mission is too important for me to allow you to jeopardize it” : HAL
In Arthur C. Clarke’s “Space Odyssey” (famously adapted for the big screen as “2001: A Space Odyssey”) the computer system that went rogue was called HAL 9000, or simply “HAL”. HAL stands for Heuristically programmed ALgorithmic computer. In the French version of the film, HAL’s name was changed to CARL.

30. Brandy or whiskey : AQUA VITAE
“Aqua vitae” is Latin for “water of life”. The original use of the term was for a concentrated solution of ethanol. Over time aqua vitae became the term used for distilled spirits and particularly wine. “Water of life” translates into Scots Gaelic as “uisge-beatha” and into Irish as “uisce beatha”. These terms give rise to our modern word “whiskey”.

32. What a monkey may see or hear : NO EVIL
The old adage “see no evil, hear no evil, speak no evil” originated in the 17th century. The phrase comes as an interpretation of a wood carving over a door in a shrine in Nikko, Japan. The carving depicts the “Three Wise Monkeys”:

34. “Groundhog Day” director : RAMIS
Harold Ramis is a real all-rounder, working as an actor, director and writer. Indeed, in the movie “Stripes” he was one of the three writers, as well as having a major acting role.

“Groundhog Day” is a 1993 comedy film that has already become a classic. The real star of the movie is Bill Murray, with the lovely Andie MacDowell putting in a great supporting performance. “Groundhog Day” is of course set in Punxsutawney, Pennsylvania although it was actually filmed in the town of Woodstock, Illinois.

35. Groups of three : TRINES
“Trine” means threefold, from the Latin “trinus” which means the same thing. “Trine” is also used for a group of three.

37. Nuclear ___ : WINTER
“Nuclear winter” is the name given to the climatic effect of a nuclear war. The idea is that the large amount of soot and smoke in the atmosphere after a large number of nuclear blasts would reduce the level of sunlight penetrating the atmosphere causing an artificial winter lasting several years. It is a hypothetical concept, thank goodness …

42. Season finale? : SERIES
I think the idea is that the World Series comes at the end of the regular season.

50. First of 50: Abbr. : DEL
The state of Delaware takes its name from Virginia’s first colonial governor, Englishman Thomas West, 3rd Baron De La Warr. Delaware is known as the First State as it was the first to ratify the US Constitution, in 1787.

52. Jennifer of the BBC production “Pride and Prejudice” : EHLE
My favorite screen version of Jane Austen’s “Pride and Prejudice” is the 1995 miniseries starring Jennifer Ehle and Colin Firth. The wonderful chemistry that Ehle and Firth exhibited on screen extended off the screen and the pair were “an item” for a while. Jennifer Ehle was recently again cast with Colin Firth, in the excellent film “The King’s Speech” from 2010.

53. Capitol Hill sight : ROTUNDA
In architecture, a rotunda is name given to a building with a circular ground plan. Often the building has a dome, but that isn’t a strict requirement for a “rotunda”.

57. Cyrillic letter between kha and che : TSE
The Cyrillic alphabet is a writing system that dates back to the First Bulgarian Empire in the 10th century AD. Cyrillic is the alphabet used in Slavic languages, including Russian. When Bulgaria was admitted to the European Union in 2007, Cyrillic became the third official alphabet of the EU, alongside the Latin and Greek alphabets.

58. Desert mount : ARAB
The Arab (or Arabian) breed of horse takes its name from its original home, the Arabian Peninsula. Like any animal that humans have over-bred, the horse falls prey to genetic diseases, some of which are fatal and some of which require the horse to be euthanized.

59. Union in 1999 news : EXXONMOBIL
The Exxon Corporation was a descendant of John D. Rockefeller’s Standard Oil Company. Exxon merged with Mobil (yet another descendant of Standard Oil) in 1999, forming ExxonMobil.

Down
1. Dean of the Truman cabinet : ACHESON
Dean Acheson was the Secretary of State in President Truman’s administration. Acheson’s most significant contribution perhaps was convincing the president to get the US involved in the Korean War in 1950.

4. Chewable Mideast stimulant : QAT
Khat (also “qat”) is a flowering plant, the leaves of which are chewed by some in the Horn of Africa and the Arabian Peninsula in particular. The leaves contain an alkaloid called cathinone which stimulates the body like an amphetamine.

5. Hexagon on a map : UTAH
The state of Utah does indeed have six sides to it. It’s almost shaped like a rectangle, but there is a “bite” out of that rectangle in the northeast corner of the state.

6. 13th-century empire founder : OSMAN
Osman I was the man who established the Ottoman Dynasty, with “Ottoman” coming from the name “Osman”. This is despite the fact that the “Ottoman Empire” came about with the conquest of Constantinople, and that didn’t happen until almost 130 years after Osman I died.

7. Muse of comedy : THALIA
In Greek mythology, the muses are the goddesses who inspire the creation of literature and the arts. The number of muses is a subject of debate at times, but the most popular view is that there are nine:

10. Elvis Costello’s debut album : MY AIM IS TRUE
Elvis Costello is an English singer and songwriter whose real name is Declan MacManus. Although Costello is more associated with the punk rock music scene, he is very active with the Jazz Foundation of America. He does a lot of work with the foundation to help jazz and blues musicians in need, especially after Hurricane Katrina.

11. Tacky yellow thing : POST-IT
The Post-it note was invented at 3M following the accidental discovery of a low-tack, reusable adhesive. The actual intent of the development program was the discovery of a super-strong adhesive.

12. Kazakhstan’s capital : ASTANA
Astana is the capital of Kazakhstan, although only since 1997. Prior to 1997, the nation’s capital was Almaty. The decision to move the capital was made as Almaty is in a part of the country populated by ethnic Russians and the new government wanted to distance itself even further from its Soviet history.

24. Coin featuring a hammer and sickle : SOVIET RUBLE
The ruble (also “rouble”) is the unit of currency in Russia, as well as several other countries of the former Soviet Union.

31. A.F.L.-C.I.O. affiliate : UAW
The United Auto Workers (UAW) was founded to represent workers in auto plants in the Detroit area in 1935. Nowadays the UAW’s membership extends into the aerospace, agriculture and other industries.

The American Federation of Labor (AFL) was founded in 1886, making it one of the first federations of unions in the country. Over time, the AFL became dominated by craft unions, unions representing skilled workers of particular disciplines. In the early thirties, John L. Lewis led a movement within the AFL to organize workers by industry, believing this would be more effective for the members. But the craft unions refused to budge, so Lewis set up a rival federation of unions in 1932, the Congress of Industrial Organizations (CIO). The two federations became bitter rivals for over two decades, until finally merging in 1955.

36. Retired boomer : SST
The most famous Supersonic Transport (SST) was the Concorde, a plane that’s no longer flying. Concorde had that famous “droop nose”. The nose was moved to the horizontal position during flight to create the optimum aerodynamic shape thereby reducing drag. It was lowered during taxi, takeoff and landing, so that the pilot had better visibility. The need for the droop nose was driven largely by the delta-shaped wings. The delta wing necessitates a higher angle of attack at takeoff and landing than conventional wing designs, so the pilot needed the nose lowered so that he or she could see the ground.

38. Like some old gaming consoles : EIGHT-BIT
The difference between an 8-bit and 16-bit processor is the amount of memory that it can work with at the same time. So, 16-bit is “better” …

43. Politico Michael and others : STEELES
Michael Steele served as chairman of the Republican National Convention from 2009 to 2011 and was the first African American to fill the post.

The Roman poet Publius Ovidius Naso is today known simply as Ovid. Ovid is usually listed alongside the two other great Roman poets, Horace and Virgil.

47. 1990s party name : REFORM
The Reform Party of the USA was founded in 1995 by Ross Perot with the intent of creating an alternative to the Republican and Democratic Parties. The Reform Party’s biggest success was the election of Jesse Ventura as Governor of Minnesota.

56. Cyclops, e.g., in comic books : X-MAN
X-Men is a team of superheroes created by Stan Lee for Marvel Comics. Nowadays the X-Men are perhaps best known as the subject of a series of movies, with Hugh Jackman playing Wolverine, and Patrick Stewart playing Professor Xavier.

60. Unhelpful noughts-and-crosses line : XOO
When I was growing up in Ireland we played “noughts and crosses” … our name for tic-tac-toe.