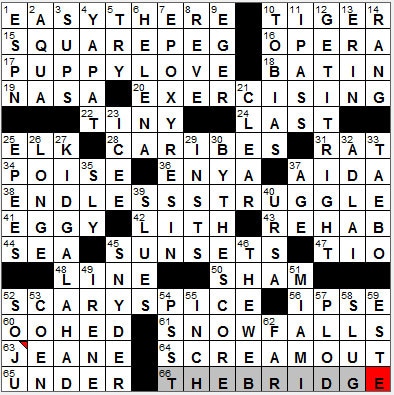 Today’s Wiki-est, Amazonian Googlies
Across
16. High-culture work : OPERA
The Latin for “work” is “opus”, with the plural being “opera”.

19. Grp. organizing booster shots : NASA
The Soviet Union launched the Sputnik satellite towards the end of 1957, a development that shocked the establishment in the US. Within months, President Eisenhower created the Advanced Research Projects Agency (ARPA, now DARPA) and the National Aeronautics and Space Administration (NASA).

25. Leather variety : ELK
The elk (also known as the wapiti) is the one of the largest species of deer in the world, with only the moose being bigger. Early European settlers were used to seeing the smaller red deer back in their homelands, so when they saw the “huge” wapiti they assumed it was a moose, and incorrectly gave it the European name for a moose, namely “elk”. The more correct term then is “wapiti”, the Shawnee name for the animal, which means “white rump”. It’s all very confusing …

28. Piranhas : CARIBES
The Black Spot Piranha (also “Caribe Piranha”) is a species of piranha found in the Orinoco River basin and parts of Venezuela and Colombia.

36. “Paint the Sky With Stars” singer : ENYA
Enya’s real name is Eithne Patricia Ní Bhraonáin, which can translate from Irish into Enya Brennan. Her Donegal family (in the northwest of Ireland) formed a band called Clannad, which included Enya. In 1980 Enya launched her very successful solo career. She sure does turn up a lot in crosswords!

37. “Written in the Stars” musical : AIDA
The rock musical “Aida” is based on Giuseppe Verdi’s original opera. The modern “Aida” premiered in 1998 and is still performed today. Music is by Elton John and lyrics are by Tim Rice.

42. Neighbor of Lat. : LITH
The nation of Lithuania is a former Soviet Socialist Republic sitting on the Baltic Sea in Northern Europe.

The independent country of Latvia is one of the former Soviet Socialist Republics. People from Latvia are called Letts.

47. Barrio kinsman : TIO
“Barrio” is the name given to an urban district in Spanish-speaking countries.

52. 1990s girl group member with a tongue piercing : SCARY SPICE
The five members of the English pop group the Spice Girls are:

63. Astrologer Dixon : JEANE
Jeane Dixon was a famous American astrologer who wrote a popular syndicated astrology column for many years.

6. Capital along Interstate 15 : HELENA
Helena is the capital of the state of Montana, and is known as the Queen City of the Rockies. Helena’s main street has a very colorful name, namely Last Chance Gulch.

9. Hungarian city that has hosted two World Puzzle Championships : EGER
Eger is a city in the northeast of Hungary that is noted for its thermal baths and for its wine production. I don’t recall having tried any wines from Eger, although we do drink a fair amount of Hungarian wine back in Ireland. I just read that Eger wines bear a resemblance to wines from Burgundy.

The annual World Puzzle Championship was first held in New York and is a creation of Will Shortz, the puzzle editor for the New York Times.

10. “This Boy’s Life” author Wolff : TOBIAS
Tobias Wolff is an author from Birmingham, Alabama. Noted for his memoirs, Wolff’s most famous work is “This Boy’s Life”, which was adapted into a movie starring Leonardo DiCaprio and Robert De Niro.

13. Land o’ blarney : ERIN
“Éire”, is the Irish word for “Ireland”. Erin is an anglicized version of “Éire”, actually corresponding to “Éirinn”, the dative case of “Éire”.

23. Drink brand with a polar bear mascot : ICEE
Icee is the brand name of one of those slushy drinks. Ugh …

25. Equipment for pentathletes : EPEES
The original pentathlon of the ancient Olympic games consisted of a foot race, wrestling, long jump, javelin and discus. When a new pentathlon was created as a sport for the modern Olympic Games, it was given the name the “modern pentathlon”. First introduced in 1912, the modern pentathlon consists of:

32. Estes was his 1956 running mate : ADLAI
Adlai Stevenson ran for president unsuccessfully against Dwight D. Eisenhower in 1952. Some years later, Stevenson served under President Kennedy as Ambassador to the United Nations. Stevenson was always noted for his eloquence and he had a famous exchange in a UN Security Council meeting during the Cuban missile crisis. Stevenson bluntly demanded that the Soviet representative on the council tell the world if the USSR was installing nuclear weapons in Cuba. His words were “Don’t wait for the translation, answer ‘yes’ or ‘no’!” followed up with, “I am prepared to wait for my answer until Hell freezes over!”

Estes Kefauver was a Democratic politician from Tennessee. In 1956 Kefauver was the running mate of Adlai Stevenson. The pair of course lost to the Eisenhower-Nixon ticket.

33. Once-faddish aerobics regimen : TAE BO
Tae Bo isn’t an ancient martial art, but was developed as a form of aerobic exercise in the 1990s. It was introduced by taekwondo expert Billy Blanks who gave it the name Tae Bo, a melding of “taekwondo” and “boxing”.

40. Constellation animal : URSA
The constellation called Ursa Major (Latin for “Larger Bear”) is often just called the Big Dipper because of its resemblance to a ladle or dipper. Ursa Major also resembles a plow, and that’s what we usually call the same constellation back in Ireland: the “plough”.

45. Tom of “Tomorrow” : SNYDER
Tom Snyder was a news anchor and radio/television personality who worked for NBC and CBS in the seventies and eighties. Snyder was best known for his late night appearances hosting “The Tomorrow Show” and “The Late Late Show”.

49. The “you” in the lyric “I’ll see you in my dreams” : IRENE
“Goodnight, Irene”, also known as “Irene, Goodnight”, is a lovely American folk song that was first recorded commercially back in 1932 by blues singer Lead Belly. The song made it to number one in the charts for the Weavers in 1950 and for Frank Sinatra in the same year.

51. Heat source? : MIAMI
The Miami Heat basketball team debuted in the NBA in the 1988-89 season. The franchise name was chosen in a competitive survey, with “Miami Heat” beating out “Miami Vice”.

52. Korean liquor similar to sake : SOJU
Soju is a Korean liquor traditionally made from rice, although other starches are also used these days. The name “sujo” translates literally as “burned liquor”.

53. Either director of 2010’s “True Grit” : COEN
I think it’s great to see two brothers working together and being so successful. Joel and Ethan Coen are two movie producers and directors who both live in New York City. The Coen brothers do love the movie-making business and they even married industry “insiders”. Ethan’s wife is film editor Tricia Cooke, and Joel is married to one of my favorite actresses, the lovely Frances McDormand.

The classic 1969 western movie “True Grit” starring John Wayne was a screen adaptation of a 1968 novel by Henry Hathaway. The Coen brothers made another adaption of the novel in 2010 starring Jeff Bridges.

59. Toward the Atlantic, in Mexico : ESTE
“Este” is the Spanish word for “east”.