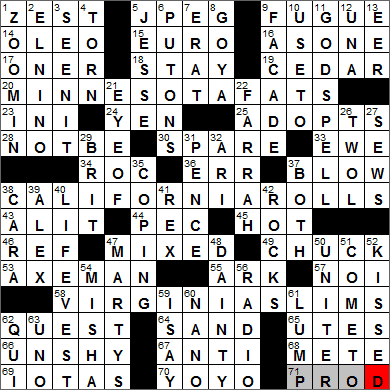 CROSSWORD SETTER: Andrea Carla Michaels
THEME: State Things … each of today’s theme answers starts with the name of a US state, and ends with a plural monosyllabic noun:

Today’s Wiki-est, Amazonian Googlies
Across
5. Digital image format : JPEG
An image file on a computer can be compressed so that it takes up less space. Some time the compression is “lossless” meaning even though the file is compressed, and data it is discarded, the image still looks the same. One example of data that can be discarded without loss of quality, is to not bother recording the color information of pixels that are the same color as others. Just saying “this pixel is the same is that one” takes up less space. One can compress files even more if one allows loss of quality. One well known compression algorithm that is “lossy” is the jpeg format. The person compressing the file can decide how much quality will suffer in jpeg format, with larger files being of higher quality than the smaller ones.

9. Many a Bach composition : FUGUE
A fugue is similar to a round in that it is a piece written for two or more voices, with themes that are introduced and taken up by different voices at different pitches. The most famous composer of fugues has to be Bach.

14. Butter alternative : OLEO
Emperor Louis Napoleon III of France announced a competition to develop a substitute for butter, a substitute that would be more accessible to the lower classes and more practical for the armed forces. In 1869, a French chemist called Hippolyte Mege-Mouries came up with something that he called oleomargarine, which was eventually manufactured under the trade name “margarine”. The name “oleomargarine” also gives us our generic term “oleo”.

15. Multinational currency : EURO
The European Union today stands at a membership of 27 states. The Euro is the official currency of only 16 of the 27. The list of states not using the Euro includes the UK, Denmark, Sweden and Norway.

17. Doozy : ONER
Something that is a dandy or a oner is remarkable or outstanding.

A “doozy” is something extraordinary or bizarre. The word’s exact origins aren’t clear, but it might be a derivative of the name Eleanora Duse, an Italian actress popular early in the 20th century.

20. Jackie Gleason’s role in “The Hustler” : MINNESOTA FATS
Jackie Gleason is an icon in the comedic acting world. His most famous role on the small screen was of course Ralph Kramdem on “The Honeymooners”. On the big screen two of his memorable roles were Minnesota Fats in 1961’s “The Hustler” and Sheriff Buford T. Justice in the “Smokey and the Bandit” films. Gleason was also noted for his interest in the paranormal. He built a house in the shape of a UFO that he called “The Mothership”, and he also claimed that President Nixon took him on a secret visit to Homestead AFB in Florida where he saw an alien spaceship and dead extraterrestrials!

24. Kyoto currency : YEN
The three currencies, the Korean Won, the Chinese Yuan, and the Japanese Yen, all take their names from the Chinese written character that represents “round shape”.

The city of Kyoto was once the capital of Japan, and in fact the name “Kyoto” means “capital city” in Japanese.

34. Fabled Arabian bird : ROC
The mythical roc is a huge bird of prey, reputedly able to carry off and eat elephants.

38. Common sushi orders : CALIFORNIA ROLLS
A California roll is a kind of sushi roll that is made inside-out, with the seaweed inside and the rice on the outside. A California roll often includes rice, seaweed, cucumber and avocado. The dish originated in Los Angeles where a chef at the Tokyo Kaikan restaurant substituted avocado for fatty tuna (“toro”) in a traditional sushi recipe. The chef also put the seaweed on the inside, as his American customers preferred not to look directly at seaweed while they were eating it!

44. Chest muscle, for short : PEC
“Pecs” is the familiar term for the chest muscle, more correctly known as the pectoralis major muscle.

49. Norris of “Walker, Texas Ranger” : CHUCK
Chuck Norris is a martial artist and an actor from Ryan, Oklahoma. Norris’s first real exposure to martial arts was in the US Air Force when he was serving in South Korea. When he left the service Norris opened up a chain of karate schools, and among his clients were Steve McQueen and his son, as well as Donny and Marie Osmond.

58. Cigarette associated with women’s tennis : VIRGINIA SLIMS
The Virginia Slims brand of cigarette was introduced in 1968 and was aimed at young professional women. The marketing slogan designed to attract these women was “You’ve come a long way, baby”. One has to wonder how such a slogan would be received these days … baby …

65. Tribe near the Great Salt Lake : UTES
The Ute is a group of Native American tribes that now resides in Utah and Colorado. The Ute were not a unified people as such, but rather a loose association of nomadic groups.

69. Small amounts : IOTAS
Iota is the ninth letter in the Greek alphabet. We use the word “iota” to portray something very small as it is the smallest of all Greek letters.

70. Toy that does tricks : YO-YO
Would you believe that the first yo-yos date back to 500 BC? There is even an ancient Greek vase painting that shows a young man playing with a yo-yo. Centuries later Filipinos were using yo-yos as hunting tools in the 1500s. “Yo-yo” is a Tagalog (Filipino) word meaning “come-come” or simply “return”.

Down
2. Pacific weather phenomenon : EL NINO
When the surface temperature of the Pacific Ocean rises or falls more that half a degree centigrade, then there is said to be an El Niño episode. That small temperature change in the Pacific has been associated with climatic changes that can stretch right across the globe. El Niño is Spanish for “the boy” and is a reference to the Christ child. The phenomenon was given this particular Spanish name because the warming is usually noticed near South America and around Christmas-time.

5. Wrestler-turned-governor Ventura : JESSE
Jesse Ventura is a former professional wrestler turned state governor. When Ventura retired from wrestling he ran for mayor in the city of Brooklyn Park in Minnesota, and won the race by beating the 25-year incumbent. In 1998, Ventura built on his 4-year experience as a mayor and won the race for Governor of the state, beating out candidates representing the two big parties in a major upset.

7. The “E” of Q.E.D. : ERAT
QED is used at the end of a mathematical proof or a philosophical argument. The QED acronym stands for the Latin “quod erat demonstrandum” meaning “that which was to be demonstrated”.

8. “The Naked Maja” artist : GOYA
Francisco Goya was a Spanish painter, often called the last of the Old Masters and the first of the moderns. Two of Goya’s most famous works are “The Nude Maja” and “The Clothed Maja”.

11. 1976 Broadway musical with the hit song “Day by Day” : GODSPELL
“Godspell” is stage musical by Stephen Schwartz and John-Michael Tebelak that opened off Broadway in 1971. The show started life as a college project at Carnegie Mellon University in Pittsburgh and simply took off. The show’s song “Day by Day” became a big hit in the popular charts.

12. A, in Acapulco : UNA
The Mexican city of Acapulco is on the southwest coast of the country, in the state of Guerrero. The name “Acapulco” translates from the local language into “at the big reeds”.

21. “___ the Tiger” (1982 hit) : EYE OF
I am no fan of boxing, or boxing films, but I do like some of the music that has come out of the “Rocky” franchise. In 1982, Sylvester Stallone specifically asked American rock band Survivor to write a song for his upcoming movie “Rocky III”. Stallone was impressed with a previous composition from the band called “Poor Man’s Son”, and wanted something in a similar style. Survivor came up with the theme song “Eye of the Tiger”, which jumped straight to the top of the charts worldwide, including in Ireland (the true barometer of a great song!).

When the TV show “Charlie’s Angels” started airing in the mid-seventies it was a little unusual in that it featured three women playing private detectives, a role usually reserved for men. The name first chosen for the show was “The Alley Cats”, then “Harry’s Angels”, before finally settling on “Charlies Angels”.

26. Like Nash’s llama vis-à-vis lama : TWO-L
The poet Ogden Nash is well known for his light and humorous verse. Try this one for size:

32. “Exodus” protagonist : ARI
“Exodus” is a wonderful novel written by American writer Leon Uris, first published in 1947. The book was incredibly well received by the public and is the second biggest bestseller in the US after “Gone with the Wind”. The hero of the piece is Ari Ben Canaan, played by Paul Newman in the 1960 film adaptation directed by Otto Preminger.

39. “Jeopardy!” host Trebek : ALEX
Canadian-born Alex Trebek has been the host of the game show “Jeopardy” since 1984.

41. Tyrannosaurus ___ : REX
The Tyrannosaurus rex (usually written T. rex) was a spectacular looking dinosaur. “Tyrannosaurus” comes from the Greek words “tyrannos” (tyrant) and “sauros” (lizard), and the “rex” is of course Latin for “king”. They were big boys, measuring 42 feet long and 13 feet tall at the hips, and weighing 7.5 tons.

47. Country singer Robbins and others : MARTYS
Marty Robbins was a country singer-songwriter from a suburb of Phoenix, Arizona. Off the stage, Robbins was an avid fan of NASCAR and participated in quite a few races, with six finishes in the top ten.

54. Baryshnikov’s nickname : MISHA
Mikhail “Misha” Baryshnikov started his dancing career with the Kirov Ballet in Leningrad before defecting to Canada in 1974. The only time my wife ever lined up to get an autograph was when she did so outside the stage door after seeing Baryshnikov dance in Syracuse, New York many moons ago. The man is a god in her eyes …

60. Certain iPod : NANO
The iPod Nano is the successor to the iPod Mini and was introduced to the market at the end of 2005. There have been five versions of the Nano to date and the current Nano as well as playing tunes is an FM player, records voice memos, and even has a pedometer!

62. Who, in Québec : QUI
The name “Québec” comes from an Algonquin word “kebec” meaning “where the river narrows”. This refers to the area around Quebec City where the St. Lawrence River narrows as it flows through a gap lined by steep cliffs.

63. Card game akin to crazy eights : UNO
In my youth I remember being taught a great card game by a German acquaintance of mine called Mau Mau. Years later I discovered that Uno is basically the same game, but played with a purpose-printed deck instead of the regular deck of playing cards that’s used for Mau Mau. I hear that Mau Mau is derived from the game called Crazy Eights.