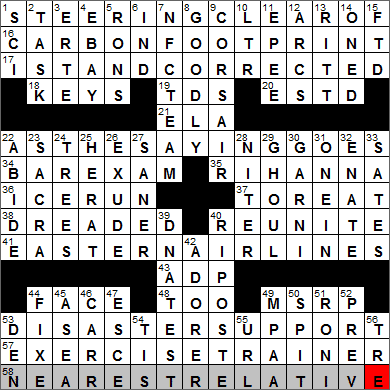 Today’s Wiki-est, Amazonian Googlies
Across
16. What an environmentalist wants to reduce : CARBON FOOTPRINT
The carbon footprint of a person, family or organization say, is defined as the total set of greenhouse gases caused by the presence and activities of that entity. More simply it is a measure of the total amount of carbon dioxide and methane emitted by the entity.

35. Singer of the 2010 #1 hit “Rude Boy” : RIHANNA
Rihanna was born and grew up on the island of Barbados, moving to the US when she was 16-years-old to pursue a singing career.

36. Post-winter breakup : ICE RUN
An ice run is the initial breaking up of river ice during the first thaw after winter.

38. Like a bugbear : DREADED
A bugbear is a character from English folklore, a goblin in the form of a bear who was said to eat naughty children. Our contemporary bugbear is less scary and is simply something that is annoying or irritating.

41. Its first C.E.O. was the W.W. I hero Eddie Rickenbacker : EASTERN AIR LINES
Eastern Air Lines was around from 1927 until 1991. The company was purchased in 1938 by Eddie Rickenbacker, who was a WWI flying ace. Under Rickenbacker’s leadership, Eastern were very successful. However, the airline couldn’t cope with a strike, high fuel prices and deregulation in the nineties, so Eastern went bankrupt in 1991.

Eddie Rickenbacker was the USA’s most successful fighter ace in World War One. He recorded 26 victories during the war. After the war, Rickenbacker’s most successful business venture was as owner of Eastern Air Lines. In 1941, he nearly died on an Eastern flight that crashed outside Atlanta.

53. FEMA mission : DISASTER SUPPORT
Federal emergency management has been structured for over 200 years, but what we know today as the Federal Emergency Management Agency (FEMA) was created in 1979 in an Executive Order issued by President Jimmy Carter.

Down
3. “Broadway’s in Fashion” artist : ERTE
Erté was the pseudonym of French artist (Russian born) Romain de Tirtoff. Erté is the French pronunciation of his initials “R.T.”

4. Owner of Bill Me Later : EBAY
Bill Me Later is a method of payment offered by many websites. Bill Me Later basically an alternative to using a credit card, and is in effect a line of credit. The credit is provided by WebBank from Salt Lake City, and Bill Me Later is owned by eBay through its PayPal subsidiary.

5. Running back Dayne and others : RONS
Ron Dayne is a former NFL running back. Dayne won the Heisman Trophy in 1999.

6. Birthplace of Rex Stout and Kurt Vonnegut: Abbr. : IND
Rex Stout was an author who was mainly known for his detective fiction featuring his hero Nero Wolfe. One of Stout’s friends was the British author P. G. Wodehouse who wrote the “Jeeves” series of books.

7. Bears, e.g. : NFC TEAM
The Chicago Bears were founded in Decatur, Illinois in 1919 and moved to Chicago in 1921. The Bears are one of only two franchises in the NFL that were around at the time of the NFL’s founding (the other is the Arizona Cardinals, who were also based in Chicago in 1921).

9. Pirate : CORSAIR
Corsairs were privateers, seamen who were authorized by France to attack and plunder vessels from nations who were at war with the French.

10. It’s often 11 in. long : LTR
Like so many things it seems, our paper sizes here in North America don’t conform with the standards in the rest of the world. ISO standard sizes used elsewhere have some logic behind them in that the ratio of width to length is usually one to the square root of two. This mathematical relationship means that when you cut a piece of paper in two each half preserves the aspect ratio of the original, which can be useful in making reduced or enlarged copies of documents. Our standard size of “letter” (8.5 x 11 inches) was determined in 1980 by the Reagan administration to be the official paper size for the US government. Prior to this, the “legal” size (8.5 x 14 inches) had been the standard, since 1921.

11. French-derived word with two accents : EPEE
The French word for sword is “épée”. In competitive fencing the épée is connected to a system that records an electrical signal when legal contact is made on an opponent’s body.

13. “Hud” director : RITT
Martin Ritt is best remembered as a television and movie director. During the bad old days of the “Red Scare”, Ritt was working in television until he found himself on a blacklist for supposed support of Communist causes. He turned to the theater for work until the Red Scare had run its course, and then moved into the world of film. Some of his best known movies are “Hud”, “The Great White Hope” and “Norma Rae”.

15. 1-800-SEND ___ (apropos corp. number) : FTD
Back in 1910, fifteen florists from around America agreed to fulfill each other’s orders using the telegraph system, setting up what they called the Florists’ Telegraph Delivery. The concept grew so large that in 1965 the group started to offer international service, and changed its name to Florists’ Transworld Delivery (FTD).

23. Vertebral column parts : SACRA
The sacrum is a bone at the base of the spine.

25. Afghan province or its capital : HERAT
Herat is the third largest city in Afghanistan, and is located in the northeast of the country.

29. One present in spirit? : GHOUL
Our word “ghoul” comes from the Arabic “ghul”, the name for an evil spirit that feeds on corpses.

39. Common cold case reviver : DNA TEST
I’ve always been fascinated by the fact that the DNA of living things is so very similar across different species. Human DNA is almost exactly the same for every individual (to the degree of 99.9%). However, those small differences are sufficient to distinguish one individual from another, and to determine whether or not individuals are close family relations.

44. Set on the Saône? : FIXE
The Saône is a river in eastern France that joins up with the Rhône in Lyon.

46. Lloyd in the College Football Hall of Fame : CARR
Lloyd Carr is a former football player and coach. Carr was the head coach at the University of Michigan for over a decade before retiring in 2007.

49. Trailer-approving grp. : MPAA
The Motion Picture Association of America’s (MPAA) film-rating system (R, PG-17, G etc.) is purely voluntary and is not backed by any law. Movie theaters agree to abide by the rules that come with the MPAA ratings in exchange for access to new movies.