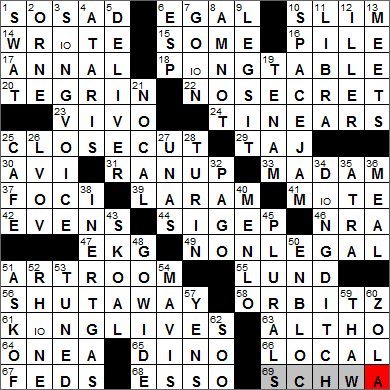 CROSSWORD SETTER: Sam Ezersky
THEME: I and/or O … this is a rebus puzzle with a twist. Some squares contain the letters IO. In one direction either the I “or” the O can be used in the answer as either answer can fit the clue. In the other direction the I “and” the O are used to make two words needed for the answer:

COMPLETION TIME: 28m 12s
ANSWERS I MISSED: All of the rebus squares (I missed the theme completely, and put in just an I or an O!)

Today’s Wiki-est, Amazonian Googlies
Across
6. Like un + quatre vis-à-vis deux + trois : EGAL
“Egal” is the French word for “equal, alike”, and a word we sometimes use in English. The national motto of France is “Liberté, égalité, fraternité”, meaning “Liberty, equality, fraternity (brotherhood).

17. Historical record : ANNAL
“Annal” is a rarely used word, the singular of the more common “annals”. An annal would be the recorded events of one year, with annals being the chronological record of events in successive years. The term “annal” comes from the Latin “annus” meaning “year”.

18. Feature of many a rec room : PING-PONG TABLE
Ping-pong is called table tennis in the UK, where the sport originated in the 1880s. Table tennis started off as an after-dinner activity among the elite, and was called “wiff-waff”. To play the game, books were stacked in the center of a table as a “net”, two more books served as “”rackets” and the ball used was actually a golf ball. The game evolved over time with the rackets being upgraded to the lids of cigar boxes and the ball becoming a champagne cork (how snooty is that?). Eventually the game was produced commercially, and the sound of the ball hitting the racket was deemed to be a “ping” and a “pong”, giving the sport its alternative name.

23. Andrea Bocelli’s “___ per lei” : VIVO
Andrea Bocelli is a classically-trained tenor who sings popular music, a so-called cross-over artist. Bocelli was born with poor eyesight and then became totally blind at the age of 12 when he had an accident playing soccer.

29. ___ Mahal : TAJ
The most famous mausoleum in the world has to be the Taj Mahal in Agra, India. The Taj Mahal was built after the death of the third wife of Shah Jahan, Mumtaz Mahal (hence the name of the mausoleum). The poor woman died in childbirth delivering the couple’s 14th child!

37. What an ellipse’s major axis passes through : FOCI
One way to envision the two foci of an ellipse is to imagine two nails sticking up out of a board, placed a small distance apart. A loop of string is placed on the board, with the nails in the middle. A pen is placed inside the loop, and moved as far away from the nails as possible, confined by the string. The pen is then run around the nails, stretching out the string so that it is taut. The pen will draw an ellipse, and the point where the nails are, they are the ellipse’s two foci.

“Mote” is just another word for a speck of dust.

44. College frat with the greatest number of chapter houses (200+) : SIGEP
The Sigma Phi Epsilon fraternity was founded in 1901 in Richmond, Virginia and is sometimes known as “SigEp”.

46. Org. with lots of big shots? : NRA
The National Rifle Association (NRA) used the slogan “I’ll give you my gun when you pry it from my cold, dead hands”. These words became quite famous when they were used at an NRA convention in 2000 by Charlton Heston, who was then president of the NRA. Heston ended a speech he made with the words “From my cold, dead hands!” while holding up into the air a replica of a Sharps rifle.

47. Heart reading, briefly : EKG
An EKG measures electrical activity in the heart. Back in Ireland, an EKG is known as an ECG (for electrocardiogram). We use the German name in the US, Elektrokardiogramm, giving us EKG. Apparently the abbreviation EKG is preferred as ECG might be confused (if poorly handwritten, I guess) with EEG, the abbreviation for an electroencephalogram, a brain scan.

55. Ilsa in “Casablanca” : LUND
Ilsa Lund was of course played by Ingrid Bergman in the 1942 movie “Casablanca”. I love the words of one critic describing the chemistry between Bogart and Bergman in this film: “she paints his face with her eyes”. Wow …

56. Quarantine : SHUT AWAY
The original use of our word “quarantine” back in the 1500s was as a legal term. A quarantine was the 40 days in which a widow had the legal right to reside in her dead husband’s house.

58. Big name in travel : ORBITZ
Orbitz is one of the big online travel companies, one that is based in Chicago. Orbitz was originally set up as a joint-venture of several airlines including Continental, Delta, Northwest and United.

65. T. Rex, e.g. : DINO
The Tyrannosaurus rex (usually written T. rex) was a spectacular looking dinosaur. “Tyrannosaurus” comes from the Greek words “tyrannos” (tyrant) and “sauros” (lizard), and the “rex” is of course Latin for “king”. They were big boys, measuring 42 feet long and 13 feet tall at the hips, and weighing 7.5 tons.

68. Canadian roadside sign : ESSO
The brand name Esso has its roots in the old Standard Oil company, as it uses the initial letters of “Standard” and “Oil” (ESS-O). The Esso brand was replaced by Exxon in the US but ESSO is still used in many other countries.

69. Agenda’s beginning or end : SCHWA
A “schwa” is an unstressed and toneless vowel found in a number of languages including English. Examples from our language are the “a” in “about”, the “e” in “taken” and the “i” in pencil.

Down
1. Kind of team : SWAT
SWAT is an acronym for Special Weapons and Tactics. The first SWAT team was pulled together in the Los Angeles Police Department in 1968.

2. Department where Camembert cheese is made : ORNE
Orne is a department and river in the northwest of France. Perhaps one of the most famous locations in Orne is the village of Camembert, the home of the famous (and delicious!) cheese.

4. Classic consoles : ATARIS
At one point Atari was the fastest growing company in US history, but it never really recovered from the video game industry crash of 1983.

10. 1996 live-action/animated comedy : SPACE JAM
“Space Jam” is a 1996 movie that is a fictional account of the retirement of Michael Jordan from the NBA. Michael Jordan himself stars in the film, along with a whole host of “Looney Tunes” cartoon characters.

11. Only astrological sign with an inanimate symbol : LIBRA
The constellation of Libra is named for the scales held by the goddess of justice. Libra is the only sign of the zodiac that isn’t named for a living creature.

12. “No One’s ___” (Eminem rap) : ILLER
Eminem’s real name is Marshall Mathers, a native of Saint Joseph, Missouri. Mathers grew up poor, raised by a single-mom as the family was abandoned by his father when he was 18 months old. Marshall and his mother moved around the country before settling in a suburb of Detroit. He didn’t do well at school, and dropped out at the age of 17. But in the end he made it pretty big …

26. Ukrainian city, once : L’VOV
L’vov is a city in the west of Ukraine that is best known today as Lviv. Lviv sits very close to the border with Poland, and indeed has been part of Poland on a number of occasions in history.

28. 2006 Winter Olympics city : TURIN
The 2006 Winter Olympics were held in Turin, in the Italian Alps. The Turin games were one of the most expensive Winter Games ever staged, and sadly much of that cost was a huge overrun, with the event costing almost twice what had been budgeted.

32. When doubled, a Pacific capital : PAGO
Pago Pago is the capital of American Samoa in the South Pacific. The island was used by the US Navy during WWII and it managed to escape most of the conflict. The only military incident of consequence was the shelling of the city’s harbor by a Japanese submarine. A more devastating event was the tsunami that hit Pago Pago and surrounding areas in 2009, causing widespread damage and numerous deaths.

34. Kids’ doorbell-ringing prank : DING DONG DITCH
Ding dong ditch is a game played by kids involving the ringing of doorbells and then running away to hide nearby. The game originated in the UK where it is usually called Knock, Knock, Ginger.

35. Razor brand : ATRA
Fortunately for crossword setters, the Atra razor was introduced by Gillette in 1977. The Atra was sold as the Contour in some markets and its derivative products are still around today.

38. It’s hard to get a reaction out of it : INERT GAS
An inert gas can be different from a noble gas. Both are relatively non-reactive, but a noble gas is an element. An inert gas on the other hand, might be a compound i.e. made up of more than one element.

40. ___ Park, Calif. : MENLO
Menlo Park is a town in the San Francisco Bay Area. The town was built around land previously owned by two Irish immigrants. The pair called their property “Menlo Park”, naming it for Menlo in County Galway, which is where the Irishmen came from.

52. Major European river : RHINE (or RHONE)
The river running through Germany that we know in English as the Rhine, is called “Rhein” in German.

The Rhone river rises in Switzerland and flows through the southeast of France.

54. One of the Staple Singers : MAVIS
Mavis Staples is an R&B and gospel singer who started out her singing career with her family’s band, the Staple Singers. Staples was a good friend of singer Bob Dylan. Dylan went as far as asking Mavis’s father for permission to marry his daughter.

60. Novelist who was a childhood friend of Cézanne : ZOLA
The most famous work of French writer Émile Zola is his 1898 open letter “J’Accuse!” written to then French president Félix Faure. The letter was published on the front page of a leading Paris newspaper, and accused the government of anti-Semitism in its handling of the trial of Captain Alfred Dreyfus. Dreyfus was a Jewish military officer in the French army, falsely accused and convicted of spying for Germany. Even after the error was discovered, the government refused to back down and let Dreyfus rot away on Devil’s Island rather than admit to the mistake. It wasn’t until 1906, 12 years after the wrongful conviction, that Dreyfus was freed and reinstated, largely due to the advocacy of Emile Zola.

Paul Cézanne was a Post-Impressionist artist who was born and worked in the beautiful city of Aix-en-Provence in the South of France. Cézanne has the reputation of being the artist who bridged the late 19th century Impressionist movement with the early 20th century Cubist movement. Both Henri Matisse and Pablo Picasso are quoted as saying that Cézanne “is the father of us all”.

62. ___ Canals : SOO
In the summer of 2010 I spent a very interesting afternoon watching ships make their way through the Soo Locks and Soo Canal between Lake Superior and the lower Great lakes. The name “Soo” comes from the US and Canadian cities on either side of the locks, both called Sault Ste. Marie.