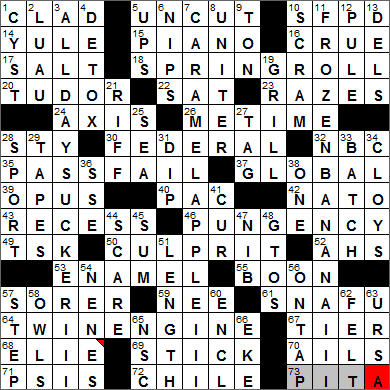 CROSSWORD SETTER: Jim Hilger
THEME: Treats on Sticks … each of the three theme answers is a treat served on a stick, and the treats are visually represented by making them down answers with three letters “I” at the bottom to denote the “stick”:

69A. Feature of this puzzle’s three long Down answers : STICK

Today’s Wiki-est, Amazonian Googlies
Across
10. Bay Area force: Abbr. : SFPD
The San Francisco Police Department (SFPD) is the 11th largest police department in the country. The SFPD dates back to the days of the Gold Rush, being founded in 1849 as a force of 35 officers. SFPD has featured a lot in movies and on television. The most famous films are probably “Bullitt”, the “Dirty Harry” series and “48 Hrs.” On television there was “Ironside”, “The Streets of San Francisco” and now “Monk”.

14. Time for eggnog : YULE
“Yule” celebrations coincide with Christmas, and the words “Christmas” and “Yule” have become synonymous in much of the world. However, Yule was originally a pagan festival celebrated by Germanic peoples. The name “Yule” comes from the Old Norse word “jol” that was used to describe the festival.

16. Rock’s Mötley ___ : CRUE
Mötley Crüe is an American rock band, from Los Angeles. They’ve been around since 1981, co-founded by the famous drummer Tommy Lee. Tommy Lee is also known for his two celebrated marriages, the first with Heather Locklear and the second with Pamela Anderson. The name “Mötley Crüe” was chosen as someone once described the band members as a “motley looking crew”. The spelling was made to look a little more exotic, with the umlauts added over the “o” and “u” one day, as the band was drinking bottles of “Löwenbräu” beer!

20. Henry VIII’s house : TUDOR
The Wars of the Roses was a series of civil wars fought for the throne of England between the rival Houses of Lancaster and York. Ultimately the Lancastrians emerged victorious after Henry Tudor defeated King Richard III at the Battle of Bosworth Field. Henry was crowned King Henry VII and united the two Houses by marrying his cousin, Elizabeth of York. Henry had a relatively long reign of 23 years that lasted until his death, after which his son succeeded to the throne as Henry VIII, continuing the relatively short-lived Tudor dynasty. He ruled from 1509 until his death in 1547. Henry VIII was the last male to lead the the House of Tudor, as his daughter Queen Elizabeth I died without issue.

30. F.D.I.C. part : FEDERAL
During the Great Depression, President Franklin D. Roosevelt signed into law the Banking Act of 1933. The legislation established the Federal Deposit Insurance Corporation (FDIC), intended to be a temporary government corporation that provided insurance on deposits made by customers of qualified financial institutions. The first accounts to be covered, in 1934, had an insurance limit of $2,500. Since the financial crisis of 2008, that limit is $250,000.

40. Campaign season org. : PAC
A Political Action Committee (PAC) is a private group that works to influence the outcome of a particular election or group of elections. Any group becomes a PAC by law when it receives or spends more than $1,000 for the purpose of influencing the outcome of an election.

42. Grp. joined by Albania and Croatia in 2009 : NATO
NATO is the North Atlantic Treaty Organization (or OTAN in French, “l’Organisation du Traité de l’Atlantique Nord”). NATO was founded not long after WWII in 1949 and is headquartered in Brussels, Belgium. The first NATO Secretary General was Lord Ismay, Winston Churchill’s chief military assistant during WWII. Famously, Lord Ismay said the goal of NATO was “to keep the Russians out, the Americans in, and the Germans down.”

46. Limburger cheese quality : PUNGENCY
Limburger is a delicious, strong-smelling cheese from Germany. It originated in the Duchy of Limburg which was located partly in the modern-day Netherlands, Belgium and Germany.

53. Canine coating : ENAMEL
Tooth enamel is the hardest substance in the human body. It is composed of 96% crystalline calcium phosphate.

59. Bridal bio word : NEE
“Née” is the French word for “born” when referring to a female. The male equivalent is “né”.

61. Major bollix : SNAFU
SNAFU is an acronym standing for Situation Normal: All Fouled Up (well, that’s the “polite” version!). As you might imagine, the term developed in the US Army during WWII.

“Bollix up” is a term absorbed from British English, and is yet another example of terms readily used here in the US that are considered very rude back in the UK. The term is of Anglo-Saxon origin, a reference to “testicles”.

68. Saab or Tahari of fashion : ELIE
Elie Saab is a Lebanese fashion designer based in Beirut. Saab also goes by the name “ES”.

Elie Tahari is an American fashion designer, although he was born in Jerusalem. Tahari immigrated to the US from Israel in 1971 and started work as an electrician in the the Garment District in New York City. It was there that he became interested in fashion.

71. Fraternity letters : PSIS
The Greek letter psi is the one that looks a bit like a trident or a pitchfork.

72. 2010 mining disaster locale : CHILE
The 2010 Chilean mining accident took place in the 121-year old San José copper-gold mine located about 30 miles north of Copiapó in the northern part of the country. 33 miners were trapped over 2,000 feet underground after a cave-in, and remained there for a record 69 days before being rescued.

73. Bread with tabouli : PITA
Tabouleh is one my my favorite dishes. It is usually made from bulgur, tomato, cucumber, parsley, mint, onion, garlic, olive oil and lemon juice. Just writing that list of ingredients gets my mouth watering …

Down
2. Party with a roast pig, perhaps : LUAU
Nowadays the word “luau” denotes almost any kind of party on the Hawaiian Islands, but to the purist a luau is a feast that always includes a serving of “poi”, the bulbous underground stems of taro baked with coconut milk.

4. Betty Ford Center program, for short : DETOX
Betty Ford was the First Lady and wife of President Gerald Ford, who was in office from 1973 to 1974. Betty Ford was forced to face her alcoholism and addiction to painkillers when her family staged an intervention in 1978. She managed to recover and then famously co-founded the Betty Ford Center in Rancho Mirage, California which treats victims of chemical dependency.

5. Co. with a brown logo : UPS
United Parcel Service (UPS) is based in Sandy Springs, Georgia and has its own airline that operates out of Louisville, Kentucky.

12. Act the crybaby : PULE
“To pule” is to whine or whimper. “Pule” is derived from the French word “piauler” which translates as “to cheep, chirp”.

13. Singers Shannon and Reeves : DELS
Del Shannon was a rock and roll singer who was born Charles Westover in Grand Rapids, Michigan. Shannon’s big hit is the 1961 classic “Runaway”. Sadly, Shannon suffered depression in his later life, and turned his own rifle on himself in 1990.

Del Reeves was a country singer who had most of his hits in the sixties. Reeves joined the Grand Ole Opry in 1966, and sung there for decades until his last performance in 2002.

21. Jazz line : RIFF
A riff is a short rhythmic phrase in music, especially one improvised on a guitar.

25. Privateer’s domain : SEA
A privateer is a person or ship that is authorized by a government to attack enemy ships during time of war. A privateer might be regarded as a pirate with some government backing, although many privateers had a very respectable reputation. One famous privateer of that ilk was Sir Francis Drake who was knighted by Queen Elizabeth I.

28. Hurling or curling : SPORT
Hurling is the national sport of my homeland of Ireland. It’s played with a stick called a hurley and a ball called a sliotar. It’s thought to be the fastest team sport in the world, and certainly has to be the oldest as it predates Christianity and was brought to Ireland by the Celts.

I think curling is a cool game (pun intended!). It’s somewhat like bowls, but played on a sheet of ice. The sport was supposedly invented in medieval Scotland, and is called curling because of the action of the granite stone is it moves across the ice. A player can make the stone take a curved path (“curl”) by causing it to slowly rotate as it slides.

38. Start of a long-distance call : ONE
The first transcontinental telephone call was made in 1915 by Alexander Graham Bell, from New York City to San Francisco. The call took 23 minutes to connect as five telephone operators were involved.

47. Penpoint : NIB
“Nib” is a Scottish variant of the Old English word “neb”, with both meaning the beak of a bird. This usage of “nib” as a beak dates back to the 14th century, with “nib” meaning the tip of a pen or quill coming a little later, in the early 1600s.

54. Spanish babies : NENES
“Nene” is the Spanish word for a male baby or young child.

58. Messengers at Hogwarts : OWLS
Hogwarts is of course the boarding school in the “Harry Potter” books.

62. Sharpie tip material : FELT
Sharpie is a brand of pen.

63. Celestial beast : URSA
The constellation called Ursa Major (Latin for “Larger Bear”) is often just called the Big Dipper because of its resemblance to a ladle or dipper. Ursa Major also resembles a plow, and that’s what we usually call the same constellation back in Ireland: the “plough”.

65. Iran-contra org. : NSC
The National Security Council (NSC) was created by President Harry S. Truman in 1947. The NSC is chaired by the sitting president, and meets in the White House Situation Room.

The Iran-Contra affair (also called “Irangate”) came to light in 1986. The “Iran” part of the scandal was the sale of arms to Iran by the Reagan administration, initially to facilitate the release of US hostages. This was done in secret largely because there was ostensibly a US arms embargo in place against Iran. The “Contra” part of the scandal arose when the man in charge of the operation, Oliver North, took funds from the arms sales and funneled the cash to the Contra militants who were fighting to topple the government in Honduras.

66. Barely make, with “out” : EKE
To “eke out” means to “make something go further or last longer”. For example, you could eke out your income by cutting back on expenses. I always have a problem with the commonly cited definition of “eke out” as “barely get by”. Close but no cigar, I say …