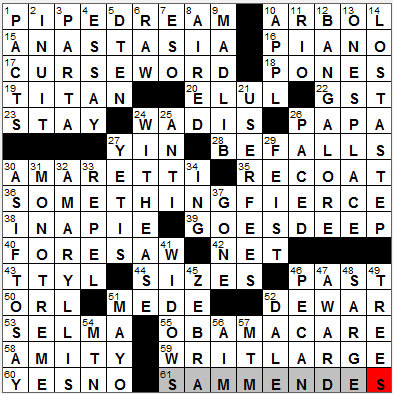 Today’s Wiki-est, Amazonian Googlies
Across
1. What many a character in “The Iceman Cometh” expresses : PIPE DREAM
In common parlance, a “pipe dream” is a vain hope for something that is unlikely to take place. The original pipe dreams were visions that were experienced after taking opiates.

“The Iceman Cometh” is a play written by American playwright Eugene O’Neill and first performed in 1946 on Broadway. The play centers on some down-and-out men in a shabby saloon in Manhattan. The title is a reference to the “ice man”, the man who would have delivered ice to homes back in the time of the play. The reference is to a bawdy joke in which the “ice man” was having an affair with someone’s wife.

15. 1997 voice role for Meg Ryan : ANASTASIA
“Anastasia” is an animated musical from Don Bluth and Gary Goldman. The storyline is based on the urban myth that Anastasia, the youngest daughter of Tsar Nicholas II, survived the family’s execution by the Bolsheviks in 1918. Anastasia is voiced by Meg Ryan, although when Anastasia sings she is played by Liz Callaway.

18. Corny fare? : PONES
Pone is another word for corn bread, from the Powhatan word “apan” meaning “something baked”.

20. Month before Tishri : ELUL
Elul is the month in the Hebrew calendar that occurs in August-September.

23. Lab directive? : STAY
The Labrador breed of dog has been around at least since 1814, and the chocolate Labrador appeared over a century later in the 1930s.

24. Desert gullies : WADIS
“Wadi” is an Arabic term referring to a valley, or perhaps a (mostly) dry riverbed. In English we might call this a wash, or in Spanish an “arroyo”.

38. Where blackbirds may be baked? : IN A PIE
“Sing a Song of Sixpence” is an English nursery rhyme that dates back to the 1700s. In the rhyme there are a couple of lines that go :

39. Poses a bomb threat? : GOES DEEP
A bomb is a long pass in American football, for which a receiver would have to “go deep”.

40. Emulated Tiresias : FORESAW
Tiresias of Thebes was a blind prophet of Greek mythology. Tiresias was noted for his seven-year transformation into a woman.

46. “Every saint has a ___”: Oscar Wilde : PAST
If you didn’t know Oscar Wilde was Irish, you will when you see the name he was given at birth: Oscar Fingal O’Flahertie Wills Wilde!

50. Magic, on scoreboards : ORL
The Orlando Magic were formed in 1989 as an NBA expansion team. A local paper was asked to run a competition to suggest names for the new team and the community came up with its four top picks of “Heat”, “Tropics”, “Juice” and “Magic”. A committee then opted for “Orlando Magic”. A good choice I think …

51. Subject of King Deioces : MEDE
Deioces was the first king of the Medes.

The Medes were an ancient people that lived in what is now northwestern Iran. The Medes held sway in the region only for about 60 years, until Cyrus the Great came along and defeated Astyages, the king of Media (not to be confused with Howard Stern, the self-proclaimed “king of all media”!).

52. Eponymous container : DEWAR
A vacuum flask is also called a Dewar flask, named after the container’s inventor Sir James Dewar. A Dewar flask is made from two flasks, one inside the other and joined at the neck. The gap between the flasks is evacuated so that there is very little air to conduct heat or transmit heat by convection from inside one flask to the outside of the other.

53. National Voting Rights Museum locale : SELMA
The Bloody Sunday march took place between Selma and Montgomery, Alabama on 7 March 1965. The 600 marchers involved were protesting the intimidation of African-Americans registering to vote. When the marchers reached Dallas County, Alabama they encountered a line of state troopers reinforced by white males who had been deputized that morning to help keep the peace. Violence broke out with 17 marchers ending up in hospital, one nearly dying. Because the disturbance was widely covered by television cameras, the civil rights movement picked up a lot of support that day.

55. Virginia v. Sebelius subject, in headlines : OBAMACARE
Virginia v. Kathleen Sibelius, Secretary of Health and Human Services was the decision made by the US Supreme Court upholding most provisions of the Patient Protection and Affordable Care Act (also known as Obamacare).

Down
2. Certain harpooner : INUIT
The Inuit peoples live in the Arctic, in parts of the US, Russia, Greenland and Canada.

4. Locke work : ESSAY
John Locke was the English philosopher who postulated that the mind is a blank slate (or “tabula rasa”) when we are born, and that we fill that slate with our experiences and observations.

7. That, in Toledo : ESO
Toledo is a city in central Spain.

9. Fill-in-the-blank story : MAD LIB
Mad Libs is a word game, usually played by American kids. The idea is that one player provides a list of words which are then inserted into blank spots in a story, usually with hilarious results (they say!).

12. India’s so-called “Garden City” : BANGALORE
Bangalore is the third most-populous city in India and is located in the south of the country. Today Bangalore is known as the Silicon Valley of India because it is a center of excellence for all things related to the semiconductor and information technology industries. I had the privilege of spending a very enjoyable few days working in Bangalore when I was in that line of work.

21. Paywall charges : USER FEES
A paywall is the system used by websites to protect content from being accessed by anyone who isn’t a paid-up subscriber.

27. Beasts of the East : YETIS
A yeti is a beast of legend, also called an abominable snowman. “Yeti” is a Tibetan term, and the beast is fabled to live in the Himalayan regions of Nepal and Tibet. Our equivalent legend in North America is that of Bigfoot, also known as Sasquatch. The study of animals whose existence have not yet been substantiated is called cryptozoology.

29. “1234” singer, 2007 : FEIST
Feist is the stage name of Canadian singer-songwriter Leslie Feist. Feist sings as a solo act, and is also a member of the indie rock group Broken Social Scene.

31. Egg-laying mammal : MONOTREME
Monotremes are mammals that lay eggs instead of giving birth to live young. The most famous example of a monotreme has to be the platypus.

32. Belladonna lily : AMARYLLIS
Plants of the genus Amaryllis are known as belladonna lilies, although they are only distant cousins of lilies. The shape of the flower of an Amaryllis plant only resembles that of a lily.

34. Dutch financial giant : ING
ING is a huge Dutch banking institution created via a merger in 1991. The company headquarters is in a spectacular building in Amsterdam called simply ING House. ING stands for Internationale Nederlanden Groep.

41. ___ walk (old house feature) : WIDOW’S
Some older coastal houses may have a railed rooftop platform that is called a widow’s walk. Despite the romantic myth that such structures were used by the wives and widows of mariners to look out to sea, a widow’s walk is just an architectural feature.

45. “I finally got around to reading the dictionary. Turns out the ___ did it”: Steven Wright : ZEBRA
Steven Wright is a remarkable and drole comedian from Cambridge, Massachusetts.

51. Bread spread : MAYO
Mayonnaise originated in the town of Mahon in Menorca, a Mediterranean island belonging to Spain. The Spanish called the sauce “salsa mahonesa” after the town, and this morphed into the French word “mayonnaise” which we use today.