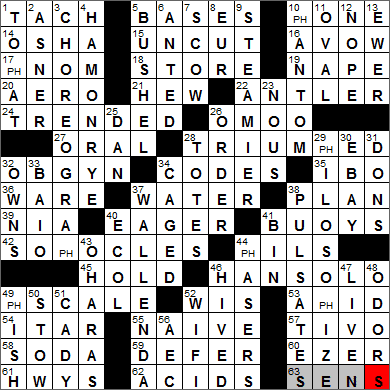 14. Federal watchdog agcy. : OSHA
The Occupational Safety and Health Administration (OSHA) was created in 1970 during the Nixon administration. OSHA regulates workplaces in the private sector and regulates just one government agency, namely the US Postal Service.

17. Half an Asian capital? : PHNOM
Phnom Penh is the capital of Cambodia, and has been since the French colonized the country in the late 1800s. The city’s name translates from the Khmer language as “Hill of Penh”.

22. Vixen feature : ANTLER
We get the names for Santa’s reindeer from the famous 1823 poem called “A Visit from St. Nicholas”, although we’ve modified a couple of the names over the years. The full list is:

26. “Typee” sequel : OMOO
Herman Melville mined his own experiences when writing his novels. Melville sailed from New Bedford, Massachusetts in 1841 on a whaler heading into the Pacific Ocean (a source for “Moby Dick”). Melville ended up deserting his ship 18 months later and lived with natives on a South Pacific Island for three weeks (a source for “Typee”). He picked up another whaler and headed for Hawaii, where he joined the crew of a US navy frigate that was bound for Boston (a source for “Omoo”).

35. Nigerian native : IBO
The Igbo (or Ibo) people are an ethnic group living in southeastern Nigeria.

42. Contemporary of Aeschylus : SOPHOCLES
Sophocles was one of three ancient Greek tragedians whose work has survived. The first of these was Aeschylus, the second Sophocles, and the third Euripides. Sophocles is believed to have written 123 plays, the most famous of which are “Antigone” and “Oedipus the King”.

44. N.L. East team, informally : PHILS
Philadelphia’s baseball team was founded in 1883 as the Quakers, with the name changing to the Philadelphias and Phillies not long into the team’s history. The Phillies have been based in the same city using the same team name longer than any other team in US professional sports.

45. Place for cargo : HOLD
Our word “cargo” is Spanish for “burden”. The Spanish word in turn comes from the Latin “carricare” meaning “to load onto a cart”. Quite interesting …

46. Fictional captive in carbonite : HAN SOLO
At one point in the “Star Wars” storyline, Han Solo was imprisoned in a block of carbonite, a fictional substance created just for the movies.

62. Substances low on the 49-Across : ACIDS
As we all recall from chemistry class, a pH of 7 is considered neutral, and water is the primary example of a substance with a pH equal to seven. Anything less than 7 is an acid, and anything above 7 is a base.

52. Mich. neighbor : WIS
Wisconsin is named for the Wisconsin River, the longest river in the state. The famous missionary Father Jacques Marquette recorded the Algonquian name for the river as “Meskousing”. This was modified by French explorers to “Ouisconsin”, with the first syllable pronounced just like the French word for “yes” … “oui’. In the early 1800s this was anglicized to “Wisconsin”.

53. Destructive pest : APHID
Aphids are called “greenfly” back in the British Isles where I come from. The most effective way to control aphids in my experience is to make sure there are plenty of ladybugs in the garden (called “ladybirds” in Ireland!).

54. ___-Tass news agency : ITAR-
TASS is the abbreviation used for the former news agency that had the full name Telegraph Association of the Soviet Union (Telegrafnoe Agentstvo Sovetskovo Soyuza). When the Soviet Union dissolved in 1992, the Moscow-based agency’s scope changed along with its name. It is now known as the Information Telegraph Agency of Russia (ITAR-TASS).

57. DVR system : TIVO
TiVo was introduced in 1999 and was the world’s first commercially successful DVR (Digital Video Recorder). If you don’t have a DVR, you might want to consider getting one. For those who enjoy television, it’s very liberating …

60. Six-Day War leader Weizman : EZER
Ezer Weizman was the seventh President of Israel. Earlier in his career, Weizman was a combat pilot in the UK’s Royal Air Force and rose to Commander of the Israeli Air Force. He also served as Minister of Defense before becoming President.

Down
1. Bit of attire for Mr. Monopoly : TOP HAT
Mr. Monopoly is also known as Rich “Uncle” Pennybags, and is the mascot of the game Monopoly. For years you could spot Mr. Monopoly reaching out of the “O” in the word “Monopoly” inscribed on the game board.

2. “The Mary Tyler Moore Show” co-star : ASNER
Ed Asner is most famous for playing the irascible but lovable Lou Grant on “The Mary Tyler Moore Show” and on the spin-off drama “Lou Grant”. Off-screen, Asner is noted for his political activism. He served two terms as president of the Screen Actors Guild (SAG) and was very involved in the 1980 SAG strike. When “Lou Grant” was cancelled in 1982, despite decent ratings, there was a lot of talk that the cancellation was a move by the network against Asner personally. In fact one of Asner’s activist colleagues, Howard Hesseman (who played Johnny Fever), found that his show “WKRP in Cincinnati” was also cancelled … on the very same day …

4. Deli choice : HAM ON RYE
The word “delicatessen” (or “deli” for short) came into English from the German “Delikatessen”. The Germans borrowed the word from French, in which language “délicatesse” means “delicious things (to eat)”. The terms ultimate root is “delicatus”, the Latin for “giving pleasure, delightful”.

7. Cargo vessel : SCOW
A scow is a flat-bottomed boat with squared off ends that’s often used for transportation, usually pushed or pulled by a barge. Often a scow can be seen carrying junk or garbage.

25. Lieutenant ___ of “Forrest Gump” : DAN
Actor Gary Sinise was nominated for a Best Supporting Actor Oscar for playing Lieutenant Dan Taylor in the 1994 film “Forrest Gump”. Senise has been playing the lead in television’s “CSI: NY” since 2004. The actor was awarded the Presidential citizen medal by President George W. Bush for his work helping Iraqi school children and his work with the USO.

30. PayPal purchaser : EBAY
PayPal has been around since the year 2000, born out of a merger of two older companies: Confinity and X.com. PayPal was so successful that it was the first of the beleaguered dot.com companies to successfully complete an IPO after the attacks of 9/11. Then in 2002, PayPal was bought by eBay for a whopping $1.5 billion.

33. “Charles in Charge” star : BAIO
Scott Baio is the actor who played Chachi Arcola in the great sitcom “Happy Days” and in the not so great spin-off “Joanie Loves Chachi”. Baio also played the title role in a later sitcom called “Charles in Charge”. Earlier in his career, he played another title role, in the 1976 movie “Bugsy Malone”, appearing opposite a young Jodie Foster.

37. Big name in flying : WALLENDA
The Flying Wallendas is a circus act noted for highwire routines that are performed without a net. The original Wallenda troupe was from Germany, and first performed in the US in Madison Square Garden in 1928. The safety net that was used by the act was lost in transit and so the Wallendas made their first American performance without a net to the delight of the crowd. Working without a net then became the act’s trademark. Despite many tragic incidents that have resulted in deaths, Wallenda family members are performing to this day.

43. Scarlett’s kin : O’HARAS
Rhett Butler hung out with Scarlett O’Hara at the Tara plantation in Margaret Mitchell’s “Gone with the Wind”. Tara was founded by Scarlett’s father, Irish immigrant Gerald O’Hara. Gerald named his new abode after the Hill of Tara back in his home country, the ancient seat of the High King of Ireland.

44. Futuristic weapons : PHASERS
A MASER is a device that was around long before LASERs came into the public consciousness. A MASER (Microwave Amplification by Stimulated Emission of Radiation) is similar to a LASER, but microwaves are emitted rather than light waves. When the storyline for “Star Trek” was being developed, the writers introduced a weapon called a “phaser”, with the name “phaser” derived from PHoton mASER.

49. Do some online skulduggery : PHISH
Phishing is the name given to the online practice of stealing user names, passwords and credit card details by creating a site that deceptively looks reliable and trustworthy. Phishers often send out safe-looking emails or instant messages that direct someone to an equally safe-looking website where the person might inadvertently enter sensitive information. “Phishing” is a variant of the word “fishing”, as in “fishing for passwords, PIN numbers etc.”

51. Women’s rights pioneer Elizabeth ___ Stanton : CADY
Elizabeth Cady Stanton was one of the earliest leaders of the woman’s rights and woman’s suffrage movements in the United States. Notably, she opposed the extension of voting rights to African American men (the Fourteenth and Fifteenth Amendments), even though she was an outspoken abolitionist. She believed that increasing the number of male voters in the country would just make it harder for women to get the vote.

52. Surcharge item in many hotels : WI-FI
“Wi-Fi” is nothing more than a trademark, a trademark registered by an association of manufacturers of equipment that use wireless LAN (Local Area Network) technology. A device labeled with “Wi-Fi” has to meet certain defined technical standards, basically meaning that the devices can talk to each other. The name “Wi-Fi” suggests “Wireless Fidelity”, although apparently the term was never intended to mean anything at all.

56. Federal agcy. of 1946-75 : AEC
The Atomic Energy Commission (AEC) was set up right after WWII in 1946, with the aim of promoting the peaceful use of atomic energy. Establishing the AEC was a significant move made by President Truman, as it passed control of atomic energy from the military to the civilian sector. The AEC continued to operate until 1974 when its functions were divided up into two new agencies: the Energy Research and Development Administration and the Nuclear Regulatory Commission (NRC).