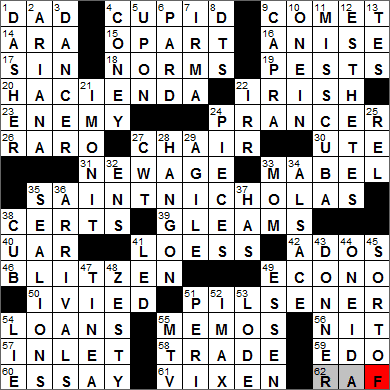 35A. Figure associated with eight answers in this puzzle : SAINT NICHOLAS

Today’s Wiki-est, Amazonian Googlies
Across
1. June honoree : DAD
Father’s Day was added as an official holiday in 1972, although bills to create the holiday had been with Congress since 1913. By rights, the holiday should be called “Fathers’ Day” (note the punctuation), but the Bill that was introduced in 1913 used the “Father’s Day” spelling, and that’s the one that has stuck.

9. Bon Ami competitor : COMET
The Comet brand of household cleanser produced a famous series of ads in the sixties through the eighties that featured a character known as “Josephine the Plumber”. Played by actress Jane Withers, she was noted for uttering the line “Nothing can hold a can to Comet!”

14. Notre Dame coach Parseghian : ARA
Ara Parseghian coached the Notre Dame football team from 1964 to 1974, a period known as “The Era of Ara”.

16. Licorice flavorer : ANISE
Liquorice (also licorice) and aniseed have similar flavors, but they come from unrelated plants. The liquorice plant is a legume like a bean, and the sweet flavor is an extract from the roots. The flavor mainly comes from an ether compound called anethole, the same substance that gives the distinctive flavor to anise. The seedpods of the anise plant are what we know as “aniseed”. The anise seeds themselves are usually ground to release the flavor.

20. Home that usually has a tile roof : HACIENDA
A “hacienda” is a large estate, in Spanish.

30. Western tribe : UTE
The Ute is a group of Native American tribes that now resides in Utah and Colorado. The Ute were not a unified people as such, but rather a loose association of nomadic groups.

31. Kind of music not known for its beat : NEW AGE
New Age music is created to provide a relaxing and stress-free atmosphere. The New Age movement is often said to have begun with the release of an album called “Spectrum Suite” by Steven Halpern in 1975.

33. Old-time actress Normand : MABEL
Mabel Normand was a comedy actress in the days of silent films, but perhaps more importantly, later in her career she became one of the first female screenwriters, producers and directors. Normand was so successful off the screen that she had her own movie studio and production company in the twenties.

35. Figure associated with eight answers in this puzzle : SAINT NICHOLAS
Saint Nicholas of Myra is the inspiration for Santa Claus. Nicholas was the Bishop of Myra (now in modern-day Turkey) during the 4th century AD, and was known for being generous to the poor. Centuries after he died, his remains were desecrated by Italian sailors and moved to Bari in Italy. One legend has it that the relics were moved again centuries later and reburied in the grounds of Jerpoint Abbey in Co. Kilkenny in Ireland, where you can visit the grave today. I choose to believe that Santa Claus’s relics are indeed buried in my homeland …

38. Two … two … two mints in one : CERTS
Certs was the first breath mint to be marketed nationally in the US, hitting the shelves in 1956. It’s called a mint, but it isn’t really as it contains no mint oil and instead has its famous ingredient named “Retsyn”.

40. Former Mideast inits. : UAR
The UAR, United Arab Republic, was a union between Egypt and Syria made in 1958 and dissolved in 1961 when Syria pulled out of the arrangement.

41. Loamy soil : LOESS
Loess is a wind-blown accumulation of silt. “Loess” is German in origin and was first used to describe silt along the Rhine Valley.

51. Pale, light lager beer : PILSENER
Pilsener beer is a pale lager. The name “pilsener” comes from the city of Pilsen, now in the Czech Republic. It was in Pilsen, in 1842, that the first bottom-fermented lager was produced. A bottom-fermented beer is much clearer that a top-fermented beer, and has a crisper taste. The “top” and “bottom” refers to where the yeast gathers during the brewing process.

55. Office missives : MEMOS
A memorandum is a “thing to be remembered” in Latin, from the verb “memorare” meaning “to call to mind”.

59. Tokyo, once : EDO
Edo is the former name of the Japanese city of Tokyo. Edo was the seat of the Tokugawa shogunate, a feudal regime that ruled from 1603 until 1868. The shogun lived in the magnificent Edo castle. Some parts of the original castle remain and today’s Tokyo Imperial Palace, the residence of the Emperor of Japan, was built on its grounds.

62. Battle of Britain victor, for short : RAF
The Royal Air Force (RAF) is the oldest independent air force in the world (i.e. the first air force to become independent of army or navy forces). The RAF was formed during WWI on 1 April 1918, a composite of two earlier forces, the Royal Flying Corps (part of the Army) and the Royal Naval Air Service. The RAF’s “finest hour” has to be the Battle of Britain when the vastly outnumbered British fighters fought off the might of the Luftwaffe causing Hitler to delay his plan to cross the English Channel. This outcome prompted Winston Churchill to utter these memorable words:

Down
2. Actress Grande : ARIANA
Ariana Grande is an actress from Boca Raton, Florida. Grande plays the role of Cat Valentine on the sitcom “Victorious” that is aired by Nickelodeon.

3. Fred Astaire or Ginger Rogers : DANCER
As you may well know, Fred Astaire’s real name was Frederick Austerlitz. Fred was from Omaha, Nebraska and before he made it big in movies, he was one half of a celebrated music hall act with his sister Adele. The pair were particularly successful in the UK, and Adele ended up marrying into nobility in England, taking the name Lady Charles Cavendish.

I am a huge Ginger Rogers fan. Rogers is famous as the on-screen and dancing partner of Fred Astaire. However, my favorite films are those romantic comedies she made later in her career, especially “The Major and the Minor” and “Monkey Business”.

4. New York’s ___ Island : CONEY
Cony, or coney, is an old English word for rabbit or rabbit fur, and Coney Island in New York takes its name from the same root. The Dutch used the name “Conyne Eylandt” (Rabbit Island) after the large population of rabbits that was hunted there.

8. Sot’s peril : DTS
The episodes of delirium that can accompany withdrawal from alcohol are called Delirium Tremens (the DTs). The literal translation of this Latin phrase is “trembling madness”.

9. “Mr. Deeds Goes to Town” director : CAPRA
I can’t tell you how many of Frank Capra’s movies are on my list of all-time favorites. He directed such classics as “It Happened One Night”, “Mr. Deeds Goes to Town”, “Lost Horizon”, “Mr. Smith Goes to Washington”, “Meet John Doe”, “Arsenic and Old Lace” and the holiday favorite “It’s a Wonderful Life”. Capra also did his bit during WWII, enlisting just a few days after Pearl Harbor was attacked. Given his great talent, and the fact that he enlisted at the relatively advanced age of 44, the US Army put him to work directing 11 documentary war films in the “Why We Fight” series, for which he was awarded the Distinguished Service Medal.

“Mr. Deeds Goes to Town” is a great Frank Capra film released in 1936, starring Gary Cooper and Jean Arthur. The movie is an adaptation of the short story called “Opera Hat” by Clarence Budington Kelland, which had been published a year earlier. The storyline is all about a relatively poor man (Mr. Deeds) who inherits millions of dollars. Mr. Deeds heads for New York City and is chased around by a devious reporter looking for an inside scoop.

11. Havana beauty, maybe : MISS CUBA
Havana is the capital city of Cuba. The city was founded by the Spanish in the early 1500s after which it became a strategic location for Spain’s exploration and conquest of the Americas. In particular, Havana was used as a stopping-off point for treasure-laden ships on the return journey to Spain.

32. U.S.N.A. grad: Abbr. : ENS
Ensign is (usually) the most junior rank of commissioned officer in the armed forces. The name comes from the tradition that the junior officer would be given the task of carrying the ensign flag.

The motto of the United States Naval Academy (USNA) is “Ex Scientia Tridens”, which translates as “From Knowledge, Sea Power”.

33. May honoree : MOM
Note the official punctuation in “Mother’s Day”, even though one might think it should be “Mothers’ Day”. President Wilson, and Anna Jarvis who created the tradition, specifically wanted Mother’s Day to honor the mothers within each family and not just “mothers” in general, so they went with the “Mother’s Day” punctuation.

34. ___-Lorraine : ALSACE
Alsace-Lorraine was a territory in the German Empire from 1871 to 1918. The territory was created when Germany annexed most of Alsace and Lorraine from France in the Franco-Prussian War. The area reverted to French control after World War One, and is now called Alsace-Moselle.

38. Chicago major-leaguer : CUB
The Chicago Cubs is one of only two charter members of the baseball’s National League who are still playing, the other being the Atlanta Braves. The Cubs last won the World Series in 1908, which is a long time ago. In fact, the Cubs have the longest championship drought of any professional sports team in North America.

43. ___ Pass : DONNER
Donner Pass is a mountain pass through which I have travelled many times. It is located in the northern Sierra Nevada just west of the town of Truckee. The pass received its name from the Donner Party, a group of emigrants bound for California from the East of the country who failed to get over the Sierras before winter set in. Only 45 out of the party of 81 survived, and some of the survivors resorted to cannibalism when their food supplies ran out.

44. Iroquois tribe : ONEIDA
The Oneida people originally lived in the area that is now Central New York. The Oneida were one of the five founding nations of the Iroquois Confederacy, also known as the Five Nations (the Mohawk, Oneida, Onondaga, Cayuga and Seneca).

49. Ruhr city : ESSEN
The Ruhr is a large urban area in western Germany. The region is heavily populated, and is the fifth largest urban area in the whole of Europe after Istanbul, Moscow, London and Paris.

51. Persian fairy : PERI
In Persian mythology, peris are fairy-like creatures who are descended from fallen angels and so must do penance before entering paradise. Over time, peris came from being regarded as evil beings and were instead welcomed as benevolent spirits.

52. Motion picture format : IMAX
The IMAX Corporation, which is behind the IMAX film format, is a Canadian company. The impetus for developing the system came after Expo ’67 in Montreal. Back then large format screenings were accomplished using multiple projectors with multiple screens, with images basically stitched together. The team behind the IMAX technology set out to simplify things, and developed a single-camera, single-projector system.

For the sake of completion, here is a full listing of all the answers:
Across