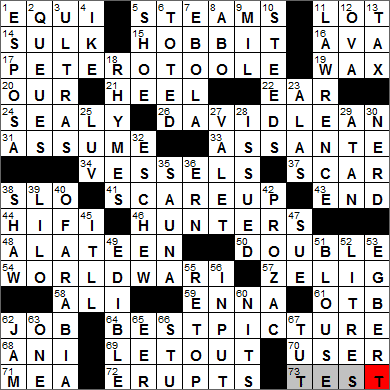 CROSSWORD SETTER: Peter A. Collins
THEME: T. E. Lawrence … each of the theme answers relates to the 1962 epic film “Lawrence of Arabia”:

Today’s Wiki-est, Amazonian Googlies
Across
15. Meriadoc the Magnificent, for one : HOBBIT
Meriadoc Brandybuck is the full name of the Hobbit called “Merry” in J. R. R. Tolkien’s “The Lord of the Rings”. In the Peter Jackson series of films, Merry is played by actor Dominic Monaghan.

16. Gardner of Hollywood : AVA
Ava Gardner is noted for her association with some big movies, but also for her association with some big names when it came to the men in her life. In the world of film, she appeared in the likes of “Mogambo” (1953), “On the Beach” (1959), “The Night of the Iguana” (1964) and “Earthquake” (1974). The men in her life included husbands Mickey Rooney, Artie Shaw and Frank Sinatra. After her marriages had failed (and perhaps before!) she had long term relationships with Howard Hughes and bullfighter Luis Miguel Dominguin whom she met through her friend Ernest Hemingway.

17. Star of 11-/40-Down : PETER O’TOOLE
Irish actor Peter O’Toole got his big break in movies when he played the title role in the 1962 epic film “Lawrence of Arabia”. But my favorite of O’Toole’s movies is much lighter fare: “How to Steal a Million” in which he stars opposite Audrey Hepburn.

24. Serta rival : SEALY
The Sealy Corporation makes mattresses. The company name comes from the city where it started out in 1881, namely Sealy, Texas. Sealy Corporation is now headquartered in Trinity, North Carolina.

Serta was founded in 1931 when a group of 13 mattress manufacturers came together, essentially forming a cooperative. Today, the company is owned by eight independent licensees in a similar arrangement.

33. Armand of “Private Benjamin” : ASSANTE
Armand Assante is an actor from New York City, the son of an Italian father and an Irish mother. Despite being an American, Assante is noted for playing non-Americans in movies. He played a Frenchman in 1980’s “Private Benjamin” and a Cuban bandleader in 1992’s “The Mambo Kings”.

34. Niña, Pinta and Santa Maria : VESSELS
As we all know, Christopher Columbus used three ships in his first voyage across the Atlantic: the Santa Maria, the Niña and the Pinta. The Pinta was the fastest of the three, and it was from the Pinta that the New World was first spotted, by a sailor on lookout called Rodrigo de Triana. Pinta was a nickname (as was Niña), meaning “the painted one”. The Pinta’s real name has been lost in mists of time.

44. LP player : HI-FI
Hi-fi systems were introduced in the late forties, audio equipment designed to give a much higher quality reproduction of sound than cheaper systems available up to that point. “Hi-fi” of course stands for “high fidelity”.

48. Adolescents’ support group : ALATEEN
Alateen is part of Al-Anon, a support group formed to help people enrolled in Alcoholics Anonymous. Alateen is a 12-step program of recovery for young people who are affected by another person’s drinking.

54. Setting of 11-/40-Down : WORLD WAR I
“Lawrence of Arabia” is a 1962 movie that recounts the real-life story of T. E. Lawrence, a British army officer famous for his role in the Sinai and Palestine Campaign of World War I. The title role in the film is played by Irish actor Peter O’Toole. The role of Sherif Ali ibn el Kharish is played by Omar Sharif.

57. Woody Allen title character : ZELIG
“Zelig” is a 1983 film by Woody Allen. “Zelig” tells the fictitious story, in documentary style, of Leonard Zelig (played by Allen) who has the gift of being able to change his appearance in order to better fit in with the company he keeps. He becomes famous as a “human chameleon”. By using archive footage, the film includes clever “cameos” by real figures from history (like Calvin Coolidge, Herbert Hoover and Susan Sontag).

58. Louisville’s Muhammad ___ Center : ALI
“The Muhammad Ali Center” is a museum in Ali’s hometown of Louisville, Kentucky. The center was opened in 2005 and explores the life of the champion boxer and features exhibitions that reflect Ali’s core values.

59. Sicilian city : ENNA
The city of Enna sits very high up in the hills of Sicily, overlooking the whole island below. Enna is the capital of the province that bears its name, which is the highest province in the whole of Italy.

61. Place to play the ponies, for short : OTB
Off-Track Betting (OTB) is the legal gambling that takes place on horse races outside of a race track. A betting parlor can be referred to as an OTB.

62. “The Lord gave, and the Lord hath taken away” speaker : JOB
It is believed that the Book of Job is the oldest book in the Bible.

68. “32 Flavors” singer DiFranco : ANI
Ani DiFranco is a folk-rock singer and songwriter. DiFranco has also been labeled a “feminist icon”, and in 2006 won the “Woman of Courage Award” from the National Organization of Women.

71. ___ culpa : MEA
Roman Catholics are very familiar with the Latin phrase “mea culpa” meaning “my fault”, as it is used in the Latin Mass. The additional term “mea maxima culpa” translates as “my most grievous fault”.

Down
1. Mexican partner : ESPOSA
“Esposa” is Spanish for “wife”.

4. Presidential nickname : IKE
There doesn’t seem to be any good reason why President Eisenhower was called “Ike”. However, it is known that the nickname dates back to his childhood as his parents called him “Ike” as well as “Dwight”.

7. African virus : EBOLA
The Ebola virus causes a very nasty form of hemorrhagic fever. The name of the virus comes from the site of the first known outbreak of the disease, in a mission hospital in the Ebola River Valley in the Democratic Republic of the Congo.

8. Blood-typing system : ABO
The most important grouping of blood types is the ABO system. Blood is classified as either A, B, AB or O, depending on the type of antigens on the surface of the red blood cells. A secondary designation of blood is the Rh factor, in which other antigens are labelled as either positive or negative. When a patient receives a blood transfusion, ideally the donor blood should be the same type as that of the recipient, as incompatible blood cells can be rejected. However, blood type O-neg can be accepted by recipients with all blood types, A, B, AB or O, and positive or negative. Hence someone with O-neg blood type is called a “universal donor”.

9. Bucks, on a scoreboard : MIL
The Bucks are an NBA basketball team based in Milwaukee, Wisconsin. The team was formed in 1968 as an NBA expansion team.

11. With 40-Down, film that opened on 12/16/1962 : LAWRENCE
40. See 11-Down : OF ARABIA
British Army officer T. E. Lawrence acted as a liaison during the Arab Revolt against the Ottoman Turks during WWI. Lawrence’s own writings of his adventures, as well reports in the news media, led to him gaining a reputation as a dashing figure and earned him the moniker “Lawrence of Arabia”.

25. Candy heart word : LUV
The forerunner to Sweethearts candy was introduced in 1866, with the famous sayings written on the candy tailored for use at weddings. One of the original expressions was, “Married in pink, he will take a drink”. The original candy was a lot bigger, to fit all those words! The smaller, heart-shaped candy hit the shelves in 1901. We’ve been able to buy Sweethearts with the words “Text me” since 2010.

35. Hot spot : SAUNA
As my Finnish-American wife will tell you, “sauna” is a Finnish word, and is correctly pronounced “sow-nah” (with “sow” as in the female pig).

36. Sea eagle : ERN
The ern (also erne) is also called the white-tailed eagle, and the sea-eagle.

38. Creator of Eliza Doolittle : SHAW
George Bernard Shaw was a very successful Irish playwright. Shaw is the only person to have been awarded both a Nobel Prize for Literature, and an Oscar. He won his Oscar for adapting his own play “Pygmalion” for the 1938 film of the same name starring Leslie Howard and Wendy Hiller. Most people are more likely to have seen the musical adaptation of “Pygmalion” that went by the title “My Fair Lady”.

39. “___ & Stitch” (Disney film) : LILO
“Lilo & Stitch” was released by Disney in 2002. Compared to other Disney feature-length cartoons, “Lilo & Stitch” was relatively cheaply produced, using the voices of lesser known actors. One interesting change had to take place in the storyline during production, when Lilo was meant to fly a Jumbo Jet through downtown Honolulu in one sequence. This was replaced with a sequence using a spaceship instead, as the producers were sensitive to public sentiment after the September 11 attacks.

42. Antidepressant brand : PROZAC
The top three antidepressants prescribed in the US (in 2007 anyway) are:

52. Petrol measures : LITRES
Petrol is of course the same thing as gasoline. “Petrol” comes via French from the Latin “petroleum”, itself derived from “petra” meaning “rock” and “oleum” meaning “oil”.

53. Ninth-century Anglo-Saxon king : EGBERT
Egbert was the King of Wessex from 802 to 829. At one point Egbert’s geographic influence was sufficient for him to be named “King of Britain”.

55. Apply another layer of asphalt to : RE-TOP
The asphalt surface on roads (or basketball courts) is more properly called asphaltic concrete, because asphalt itself is just a sticky black liquid that comes from crude petroleum. Asphalt is used as a binder with aggregate to form asphaltic concrete.

63. Derivative with respect to “x” in f(x) = x + 10 : ONE
Time to remember our math classes. f(x) = x + 10 is the equation or function describing a straight line. The “10” in the equation tells us that the line crosses the y-axis at 10. As there is a “1” (implied) before the “x”, then the slope of the line is said to be 1. Another way to arrive at the value of the slope is to take the derivative of the function with respect to x, and that turns out to be 1 as well.

66. Grimson of the N.H.L. : STU
Stu Grimson is a retired hockey player from Canada. He was a tough guy on the ice, renowned for getting in fights, so his nickname was “The Grim Reaper”.

67. Boy king of antiquity : TUT
King Tut is a name commonly used for the Egyptian pharaoh Tutankhamen. Tutankhamen may not have been the most significant of the pharaohs historically, but he is the most famous today largely because of the discovery of his nearly intact tomb in 1922. Prior to this find, any Egyptian tombs uncovered by archaeologists had been ravaged by grave robbers. Tutankhamen’s magnificent burial mask is one of the most recognizable of all Egyptian artifacts.