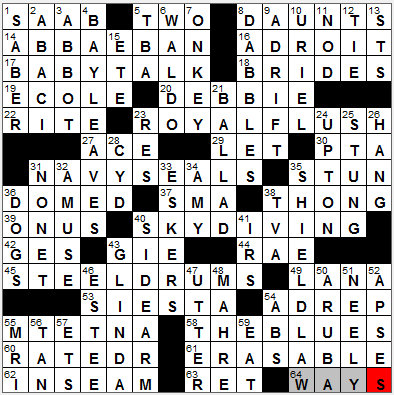 Peter Valentine’s Poetry … from the New York Times Crossword
You have to check out Peter’s compositions: poems written daily and only using words from the clues and answers of that day’s crossword!

Today’s Wiki-est, Amazonian Googlies
Across
1. Automaker with the slogan “Born from jets” : SAAB
SAAB stands for Svenska Aeroplan AB, which translates into English as Swedish Aeroplane Limited. SAAB was, and still is, mainly an aircraft manufacturer. If you take small hops in Europe you might find yourself on a SAAB passenger plane. The SAAB automobile division was acquired by General Motors in the year 2000, who then sold it to a Dutch concern in 2010. However, SAAB (automotive) finally went bankrupt in 2011.

14. Israel’s first representative to the United Nations : ABBA EBAN
Abba Eban was an Israeli diplomat and politician, born Aubrey Solomon Meir Eban in Cape Town, South Africa. While working at the United Nations after WWII, Eban changed his given name to “Abba”, the Hebrew word for “father”. He made this change as reportedly as he could see himself as the father of the nation of Israel.

16. Far from klutzy : ADROIT
The French for “to the right” is “à droit”, from which we get our word “adroit”. The original meaning of “adroit” was “rightly, properly”, but it has come to mean dexterous and skillful.

“Klutz” of course comes from Yiddish. The Yiddish word for a clumsy person is “klots”.

20. Reynolds who sang “Tammy” : DEBBIE
Debbie Reynolds got into the movie business by winning a Miss Burbank Beauty Contest when she was 16 years of age. Her prize for winning was a contract with Warner Brothers, which led to regular appearances in movie musicals. Her big break came with her appearance in 1952’s “Singin’ in the Rain”. Reynolds has been married three times, most famously to her first husband, Eddie Fisher. Together the couple had two children, Carrie and Todd Fisher. Debbie and Carrie (of Princess Leia fame) live right next door to each other in Los Angeles.

22. Bris or baptism : RITE
A mohel is a man who has been trained in the practice of Brit milah (circumcision). Brit maleh is known as “bris” in Yiddish.

31. Elite military group : NAVY SEALS
SEAL is an acronym used by the US Navy’s SEa, Air and Land teams. The SEALs were born out of the Navy’s special warfare groups from WWII, like the Underwater Demolition Teams and the Motor Torpedo Boat Squadrons. The Navy SEAL unit was established soon after President Kennedy’s famous speech in which he announced the plan to put a man on the moon, as in the same speech the president allocated $100m of funding to strengthen special operations forces. The Navy used some of this money to set up guerrilla and counter-guerrilla units, which soon became the SEALs.

35. Phaser setting : STUN
A MASER is a device that was around long before LASERs came into the public consciousness. A MASER (Microwave Amplification by Stimulated Emission of Radiation) is similar to a LASER, but microwaves are emitted rather than light waves. When the storyline for “Star Trek” was being developed, the writers introduced a weapon called a “phaser”, with the name “phaser” derived from PHoton mASER.

37. Wee, to Burns : SMA’
The Scots dialect word sma’ means “small”. It famously appears in the Robert Burns poem, “To a Mouse”. The pertinent lines read:

39. So-called “albatross” : ONUS
An “albatross” is sometimes a metaphor for a psychological burden. This usage comes from the poem “The Rime of the Ancient Mariner” by Samuel Taylor Coleridge. In the story, an albatross is following a ship, a sign of good fortune. Then the “ancient mariner” shoots the albatross with a crossbow, an act that will bring a curse on the ship. The other sailors punish the mariner by forcing him to wear the dead albatross around his neck.

44. Arctic explorer John : RAE
John Rae was a Scottish explorer, who took on the task of searching for the ill-fated Franklin Expedition of 1845. The Franklin Expedition was itself searching for the elusive Northwest Passage through the Arctic Ocean connecting the Atlantic to the Pacific. John Rae created much controversy back in England when he reported evidence of cannibalism among the ill-fated Franklin explorers.

49. Superboy’s sweetie : LANA
Smallville, Kansas is the town on Earth in which Superman grew up (as Clark Kent). One of Clark’s best friends in Smallville, and the romantic interest of his youth, was Lana Lang.

53. Nap in Nogales : SIESTA
Nogales (properly called “Heroica Nogales”) is a city in the Mexican State of Sonora. Nogales lies right on the Mexico-US border, opposite the city of Nogales, Arizona.

54. Madison Ave. figure : AD REP
Madison Avenue became the center of advertising in the US in the twenties, and serves as the backdrop to the great TV drama “Mad Men”. There aren’t many advertising agencies left on Madison Avenue these days though, as most have moved to other parts of New York City.

55. Sicilian smoker : MT ETNA
Mt. Etna is the largest of three active volcanoes in Italy. Mt Etna is about 2 1/2 times the height of its equally famous sister, Mt. Vesuvius.

60. For mature audiences, say : RATED R
The Motion Picture Association of America’s (MPAA) film-rating system is purely voluntary and is not backed by any law. Movie theaters agree to abide by the rules that come with the MPAA ratings in exchange for access to new movies.

Down
2. Early adders : ABACI
The abacus was used as a counting frame long before man had invented a numerical numbering system. It is a remarkable invention, particularly when one notes that it is still widely used today across Africa and Asia.

4. Flavorings for some stews : BAY LEAVES
The seasoning known as bay leaf is the aromatic leaf of the bay laurel tree or shrub. Fresh bay leaves aren’t very flavorful and need to be dried and aged for a few weeks before use in the kitchen.

8. Acts the dilettante : DABBLES
We use the word “dilettante” for someone who dabbles in the world of art or in some particular field of knowledge. We borrowed the term from Italian, in which language a dilettante is a lover of fine arts, a connoisseur.

10. Archangel of the Apocrypha : URIEL
Uriel is one of the archangels, in Jewish and Christian traditions.

15. Season after printemps : ETE
In French, spring (printemps) is followed by summer (été).

24. Sinclair who wrote “The Jungle” : UPTON
Upton Sinclair was a prolific American author, with almost 100 books to his name. Sinclair’s most famous work is probably “The Jungle”, a 1906 novel about the meat packing industry that contributed to the Meat Inspection Act being passed by Congress a few months after the book was published. He also wrote “Oil”, published in 1927, which was the basis of the 2007 film “There Will Be Blood”, starring Daniel Day-Lewis.

28. Charisse of “Silk Stockings” : CYD
Actress Cyd Charisse was famous for her dancing ability and the many roles she played opposite Fred Astaire and Gene Kelly. Charisse carved out a career based on dance despite the fact that she suffered from polio as a child. In fact, she took up ballet at the age of twelve to help build up her strength as she recovered from the disease.

31. Large combo : NONET
A nonet is a piece requiring nine musicians for a performance.

33. Glacial ridges : ESKERS
An esker is a long and winding ridge formed by glaciation, made of sand and gravel. The term “esker” comes from the Irish word “eiscir” that describes the same feature.

35. Statute that protects journalists’ sources : SHIELD LAW
When a news reporter exercises a legal right not to divulge a source of information, he or she is taking advantage of a shield law, which gives some legal protection to the reporter and informant. There is no federal shield law, but a majority of the US states have shield laws in place.

38. Dam agcy. : TVA
The Tennessee Valley Authority (TVA) has to be one of America’s great success stories when it comes to economic development. Created in 1933, the TVA spearheaded economic development in the Tennessee Valley at the height of the Great Depression. Central to the success was the federally-funded construction of flood-control and electricity-generation facilities.

41. Form letters? : IRS
The Internal Revenue Service (IRS) was set up during the Civil War to raise money to cover war expenses. Prior to the introduction of income tax in 1862, the government was funded by levies on trade and property.

46. Lauder of cosmetics : ESTEE
Estée Lauder was quite the successful business woman, with a reputation as a great salesperson. Lauder introduced her own line of fragrances in 1953, a bath oil called “Youth Dew”. “Youth Dew” was marketed as a perfume, but it was added to bathwater. All of a sudden women were pouring whole bottles of Ms. Lauder’s “perfume” into their baths, while using only a drop or two of French perfumes behind their ears. That’s quite a difference in sales volume …

48. 1984 Olympic slalom champ Phil : MAHRE
Phil Mahre is one of the great alpine ski racers, a native of Yakima, Washington. Phil’s twin brother Steve was also a skier on the World Cup circuit.

50. Resort isle near Curaçao : ARUBA
Aruba is one of the so-called ABC Islands. The ABC Islands is the nickname given to the three westernmost islands of the Leeward Antilles in the Caribbean. The nickname comes from the first letters of the island names: Aruba, Bonaire and Curaçao. All three of the ABC Islands are part of the Kingdom of the Netherlands.

51. Hockey great Cam : NEELY
Cam Neely is a retired professional hockey player from Comox, British Columbia. Having played for the Vancouver Canucks and the Boston Bruins, Neely is now the president of the Bruins.

52. Some recesses : APSES
The apse of a church or cathedral is a semicircular recess in an outer wall, usually with a half-dome as a roof and often where there resides an altar. Originally apses were used as burial places for the clergy and also for storage of important relics.

55. CAT scan alternative : MRI
A CT (or “CAT”) scan produces (via computer manipulation) a three dimensional image of the inside of an object, usually the human body. It does so by taking a series of two dimensional x-ray images while rotating the camera around the patient. The issue with CT scans is that they use x-rays, and high doses of radiation can be harmful causing damage that is cumulative over time. An MRI on the other hand (Magnetic Resonance Imaging), uses powerful magnetic fields to generate its images so there is no exposure to ionizing radiation (such as X-rays). We used MRI equipment in our chemistry labs at school, way back in the days when the technology was still called Nuclear Magnetic Resonance Imaging (NMRI). Apparently the marketing folks didn’t like the term “nuclear” because of its association with atomic bombs, so now it’s just called MRI.