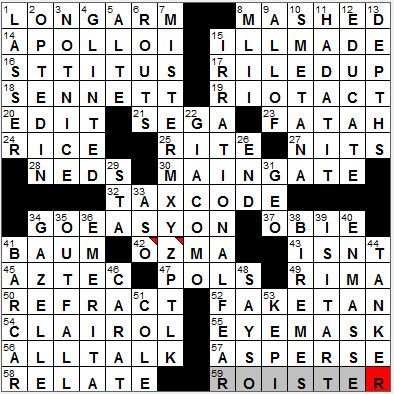 Today’s Wiki-est, Amazonian Googlies
Across
14. Tragic mission : APOLLO I
Apollo 1 was planned to be the first manned mission in NASA’s lunar landing program. Sadly, the three crew members perished in a tragic cabin fire that took place in a launch pad test. The astronauts who died were Gus Grissom (the second American to fly in space), Edward White (the first American to walk in space) and Roger Chaffee (the pilot for the planned Apollo 1 mission).

16. First bishop of Crete, traditionally : ST TITUS
Tradition is that St. Paul ordained Titus as bishop of Gortyn, the Roman capital of Crete.

18. Pioneer of slapstick cinema : SENNETT
Mack Sennett was a director and actor noted for innovating slapstick comedies. Sennett used many wild car chases in his movies and went through a lot of custard pies.

19. Old means of crowd control : RIOT ACT
The Riot Act was a British law that was in force from 1715 to 1967. According to the Riot Act, government entities could declare any gathering of twelve or more people “unlawful”. Our expression “read the Riot Act” is derived from the requirement for the authorities to read out the Riot Act proclamation to a unlawful assembly before the Act could be enforced.

21. Genesis origin? : SEGA
Sega is a Japanese video game company headquartered in Tokyo. Sega actually started out 1940 in the US as Standard Games, located in Honolulu. The owners moved the operation to Tokyo in 1951 and renamed the company to Service Games. The name “Sega” is a combination of the first two letters of the words “Se-rvice” and “Ga-mes”.

23. Hamas rival : FATAH
“Fatah” is actually an acronym, formed from the initials (in reverse) of “Palestinian National Liberation Movement”. Al Fatah is the largest political party in the Palestine Liberation Organization (PLO).

Hamas is the Islamist political party that governs the Gaza Strip. “Hamas” translates into English as “enthusiasm”, and is also an acronym in Arabic for “Islamic Resistance Movement”. Hamas is classified as a terrorist organization by many nations in the world, including the US.

24. Bush cabinet member : RICE
Condoleezza Rice was the second African American to serve as US Secretary of State (after Colin Powell) and the second woman to hold the office (after Madeleine Albright). Prior to becoming Secretary of State in President George W. Bush’s administration, Rice was the first woman to hold the office of National Security Advisor. In private life, Rice is a remarkably capable pianist. Given her stature in Washington, Rice has had the opportunity to play piano in public with the likes of cellist Yo-Yo Ma, and soul singer Aretha Franklin.

The Obies are the “Off-Broadway Theater Awards”. The Obies are presented annually, and the recipients are chosen by “The Village Voice” newspaper.

41. 42-Across’s creator : BAUM
42. Princess in 41-Across books : OZMA
L. Frank Baum (the “L” is for Lyman) was of course famous for writing “The Wonderful Wizard of Oz”. Writing early in teh 20th  century, Baum actually described in his books things that had yet to be invented, like television, laptop computers and wireless telephones.

L. Frank Baum wrote a whole series of books about the Land of Oz, and Princess Ozma appears in all of them except the one that’s most famous, “The Wonderful Wizard of Oz”.

43. “Tepper ___ Going Out” (Calvin Trillin novel) : ISN’T
“Tepper Isn’t Going Out” is a 2001 comic novel by Calvin Trillin. It tells the story of a man who enjoys parking in New York City, just parking …

45. Like the army that “eagle warriors” fought in : AZTEC
Eagle warriors were also called eagle knights. They were special infantry soldiers in the Aztec army. The logo used by Aeroméxico, the flag carrier for Mexico, is a representation of an eagle warrior.

47. Hill people : POLS
There are lots of politicians on Capitol Hill, lots and lots of them …

50. Send a different way? : REFRACT
A beam of light say, can change direction when passing from one medium into another. This change of direction is known as refraction.

52. Many a bodybuilder’s application : FAKE TAN
The most effective fake tans available today are not dyes or stains. Instead, they are sprays with tactive ingredient dihydroxyacetone (DHA). DHA reacts chemically with amino acids in the dead layer of skin on the surface of the body. Sounds a little risky to me …

54. Born Blonde maker : CLAIROL
“Does she…or doesn’t she? Only her hairdresser knows for sure” was the catchphrase for Miss Clairol Hair Color Bath. Clairol had been around since 1931 selling hair-coloring products to salons, and then hit the bigtime with the introduction of a one-step, hair-coloring product for use at home. Equally as famous as the product was the “does she … doesn’t she” advertising campaign. Six years after the launch of the campaign, 70% of women in the US were coloring their hair.

57. Sling mud at : ASPERSE
To asperse is to spread false charges or make insinuations. The more common term is “to cast aspersions”. “To aspere” comes from the Latin “aspergere” meaning “to sprinkle”. So, “to asperse” is also the term used when sprinkling holy water.

59. Party hearty : ROISTER
“To roister” is to revel noisily. The term derives from the Middle French word “ruistre” meaning “ruffian”.

Lex Luthor is the arch-nemesis of Superman in comics. Luthor has been portrayed in a number of guises in the comic world as well in movies and on the small screen. For example, he appeared as Atom Man in the 1950 film series “Atom Man vs. Superman”, and was played by actor Lyle Talbot, opposite Kirk Alyn’s Superman. More recently, Lex Luthor was played by Gene Hackman in the “Superman” series of movies starring Christopher Reeve in the title role.

8. Birth year of King Philip I : MLII
King Philip I was King of the Franks from 1060 until he died in 1108. Born in 1052, he was rather descriptively known as King Philip the Amorous …

10. “The Bartered Bride” composer : SMETANA
Bedřich Smetana was a Czech composer, known as the father of Czech music. Just like Beethoven, Smetana was still composing at the end of his life even though he was totally deaf.

22. Adventurer Casanova : GIACOMO
Giacomo Casanova was an 18th century adventurer from Venice. We know so much about him, and his reputation as a womanizer, because he left us his autobiography “Histoire de ma vie” (Story of My Life). A guy recounting stories of his love life and conquests. All true, I am sure …

29. Bullet-catching place?: Abbr. : STA
At a station (sta.) one might catch a bullet train.

31. Storm producer, once : GEO
Geos were small vehicles manufactured by General Motors mainly in the nineties. Geos were designed to compete head-to-head with the small imports that were gaining market share at the time in the US. Some Geo models that you might remember are the Metro, the Prizm and the Storm. The cars were actually built as joint-ventures with Japanese manufacturers. The Prizm was a GM/Toyota project, the Metro was GM/Suzuki, and the Storm was GM/Isuzu.

34. Fast, graceful runner : GAZELLE
When running at a sustained speed, gazelles can move along at 30 miles per hour. If needed, they can accelerate for bursts up to 60 miles per hour.

36. Like some professors : EMERITA
Emeritus (female form “emerita”) is a term in the title of some retired professionals, particularly those from academia. Originally an emeritus was a veteran soldier who had served his time. The term comes from the Latin verb “emerere” meaning to complete one’s service.

38. Ancient double-deckers : BIREMES
Triremes were galleys used in the Mediterranean by a number of cultures, including the Ancient Greeks and Romans. The trireme was so called because there were three rows of oars on each side of the vessel. The term “trireme” comes from the Latin “tres remi” meaning “three-oar”. There was also a less ambitious version of the trireme that had only two banks of oars, and that was known as a bireme.

40. How hordes advance : EN MASSE
“En masse” is of course a French term best translated as “as a group”.

46. Stone unit : CARAT
A karat (also “carat”, the spelling outside of North America) is a measure of the purity of gold alloys, with 24-karat representing pure gold.

53. Zouave headgear : KEPI
The kepi is that circular cap with a visor, worn in particular by the French military.

A zouave was a light infantry regiment in the French Army, one serving in French North Africa.