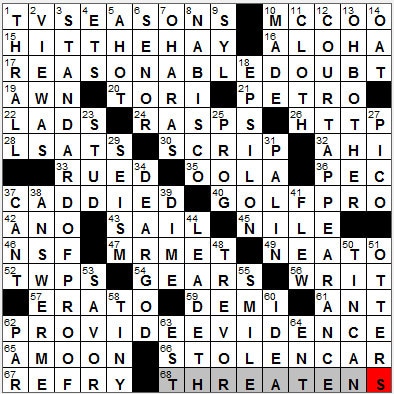 CROSSWORD SETTER: Vic Fleming
THEME: It’s the Law … today’s grid is replete with answers that relate to the law:

17A. Cause for acquittal : REASONABLE DOUBT
28A. Exams for students potentially most interested in this puzzle’s theme, in brief : LSATS
62A. Show some photos, perhaps : PROVIDE EVIDENCE
3D. Something applied to a suit : STANDARD OF PROOF
12D. Date with a judge? : COURT APPEARANCE

Today’s Wiki-est, Amazonian Googlies
1. Spans usually starting in the fall : TV SEASONS
In North America, a television broadcasting season typically runs from September through May of the following year and includes 20 to 26 episodes of a particular show.

10. Marilyn of R&B : MCCOO
Marilyn McCoo is best known as the lead female singer with the 5th Dimension, a group that was very successful in the sixties and seventies. McCoo married another member of the 5th Dimension, Billy Davis, Jr. and the couple are still performing, but now as a duo.

16. Lei Day “hey” : ALOHA
What’s known as May Day around the world is also called Lei Day in Hawaii. Lei Day started in the twenties and is a celebration of native Hawaiian culture.

19. Beard of botany : AWN
Awns are hair or bristle-like structures found in numerous species of plants. In some species, like barley, the awns can contain photosynthetic tissue.

20. “___ & Dean: Home Sweet Hollywood” (reality series) : TORI
“Tori & Dean” is a reality television show about actress Tori Spelling and her husband Dean McDermott. The show appears on the Oxygen Network and was subtitled “Inn Love” for the first two seasons. Those first episodes followed the couple as they bought and renovated a bed & breakfast in San Diego County. Subsequent episodes were subtitled “Home Sweet Hollywood” and focus on the couple’s life in Los Angeles.

26. Millions of addresses start with it : HTTP
“http” are the first letters in most Internet link addresses. “http” stands for HyperText Transfer Protocol.

28. Exams for students potentially most interested in this puzzle’s theme, in brief : LSATS
The Law School Admission Test (LSAT) has been around since 1948.

30. Rx order : SCRIP
When used in a medical context, “scrip” is an abbreviation for “prescription”.

35. Dancer enslaved by Jabba the Hutt : OOLA
Oola was a slave-girl dancer who was eaten by a scary creature in the movie “Star Wars Episode VI: The Return of the the Jedi”. Oola was played by British actor Femi Taylor.

36. Contracted muscle? : PEC
“Pecs” is the familiar term for the chest muscle, more correctly known as the pectoralis major muscle.

37. Worked for a 40-Across : CADDIED
“Caddie” is a Scottish word, as one might expect given the history of the game of golf. “Caddie” is a local word derived from the French “cadet”, meaning a younger son or brother, and also a student officer in the military.

47. Big-headed major-league mascot : MR MET
Mr. Met is the mascot of the New York Mets. He is a guy with a large baseball as a head, and has been elected to the Mascot Hall of Fame.

56. Means of enforcing compliance : WRIT
A writ is an order issued by some formal body (these days, usually a court) with the order being in written form. Warrants and subpoenas are examples of writs.

57. Versifier’s inspiration : ERATO
In Greek mythology, Erato was the Muse of Lyric Poetry.

59. Prefix with god : DEMI-
The prefix “demi-” means “half”, and so a demigod is a “half god”. A demigod in mythology is the child of parents, one of whom is a god and the other human.

61. One to emulate in an Aesop fable : ANT
In Aesop’s fable “The Ant and the Grasshopper”, the grasshopper spends the warm months singing and having a good time while the ant toils away storing food. When winter arrives, the grasshopper starts to die from hunger and begs the ant for food. The ant tells the grasshopper that he should have been more sensible instead of singing away all summer, and maybe he should dance through the winter!

68. Cows : THREATENS
The verb “to cow” means to intimidate, to scare. The exact etymology of the term seems unclear.

Down
1. One held in bondage : THRALL
“Thrall” is servitude or bondage, or a person in servitude. A “thrall” was a serf or servant in slavery in Scandinavia during the days of the Vikings.

4. Subjects of an as-yet-fruitless search, briefly : ETS
In 1952, the USAF revived its studies of reports of UFO sightings in a program called Project Blue Book. Project Blue Book ran from 1952 until it was shut down in 1969 with the conclusion that there was no threat to national security and that there were no sightings that could not be explained within the bounds of modern scientific knowledge.

6. Caballero : SENOR
“Caballero” is the Spanish for “knight, gentleman”.

7. Family in a Margaret Mitchell best seller : O’HARAS
In Margaret Mitchell’s novel “Gone with the Wind”, when Rhett Butler finally walks out on Scarlett O’Hara he utters the words “My dear, I don’t give a damn”. Most of us are more familiar with the words spoken by Clark Gable in the film adaption of the story: “Frankly, my dear, I don’t give a damn.”

9. One of four in mythology?: Abbr. : SYL
There are four syllables (syl.) in the word “mythology”.

25. ___ rock (music genre) : PROG
Progressive Rock was a subgenre of rock music that originated in the UK in the mid-sixties. Musicians composing progressive rock tended to write rock songs that included influences from other genres.

The concept of being one’s own person, going it alone, is popularly known as being a “maverick”. In the days of open range ranching, a maverick was a steer that didn’t carry a brand. An unbranded animal was usually the result of a branded animal giving birth on the open range, with the young growing up without having being captured and claimed by an owner. The use of the name “maverick” comes from Texas rancher Samuel Maverick, who refused to brand his cattle. He stated that he did not want to inflict pain on his cattle, and so laid claim to any cattle on the range that weren’t branded. His stubborn refusal to cooperate with the neighboring ranchers gave rise to our modern description of a single-minded individual as a “maverick”.

64. One who might write an Rx for drops : ENT
An Ear, Nose and Throat specialist is an ENT.