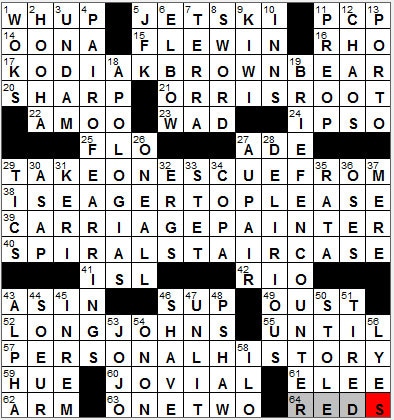 Today’s Wiki-est, Amazonian Googlies
Across
5. Lakeside rental : JET SKI
“Jet Ski” is actually a brand name, owned by Kawasaki Heavy Industries of Japan. The generic term, not often used, is “personal watercraft”. Most people use the term “Jet Ski” generically, although “WaveRunner” is also popular. But that’s another brand name, owned by Yamaha.

11. Angel dust : PCP
Phencyclidine is a recreational drug usually referred to on the street as PCP or “angel dust”.

14. O’Neill whom J. D. Salinger wanted to marry : OONA
Oona O’Neill dated J. D. Salinger and Orson Welles in her teens, but ended up marrying Charlie Chaplin. Oona was still pretty young when she married Chaplin, much to the dismay of her famous father, the playwright Eugene O’Neill. After the marriage Eugene disowned Oona as he was pretty upset about 54-year-old Chaplin marrying his 18-year-old daughter.

16. Sweater letter : RHO
Rho is the Greek letter that looks just like our Roman letter “p”.

17. Huge snagger of salmon : KODIAK BROWN BEAR
Brown bears are found over much of northern Europe, Asia, and North America. The biggest subspecies of brown bear is the Kodiak Bear, the largest land-based predator in the world. The Kodiak grows to about the same size as the enormous polar bear.

21. Pulverized perfumery item : ORRIS ROOT
Orris root is a basic ingredient in many perfumes, providing a so-called “base note”. It is also an ingredient in some brands of gin.

22. “Here ___, there …” : A MOO
There was an American version of the English children’s song “Old MacDonald Had a Farm” (E-I-E-I-O), that was around in the days of WWI. The first line of the US version goes “Old MacDougal had a farm, in Ohio-i-o”.

25. Cheery cashier in Progressive ads : FLO
Flo is a perky character featured in ads for Progressive Insurance. Flo is played by comedienne and actress Stephanie Courtney.

27. Hoosier humorist George : ADE
George Ade was a writer and newspaper columnist from Indiana. Ade wrote very popular pieces in a humorous style. His popularity was enough to make him a millionaire in the early 1900s.

39. Quaint worker doing a hansom job? : CARRIAGE PAINTER
A hansom cab is a very specific design of horse and buggy that was patented by Joseph Hansom in 1834 in England. The “cab” in the name is short for “cabriolet”, a prior design of carriage on which the hansom was based. It’s from “hansom cab” that we get our modern term “cab”.

41. Gazetteer abbr. : ISL
A gazetteer is a geographic dictionary. Back in the early 1600s, a gazetteer was a journalist. Around 1700, a geographical handbook for journalists was issued called “The Gazetteer’s, or Newsman’s, Interpreter”, which eventually became simply “The Gazetteer”, giving us our usage today.

61. Part of a C.S.A. signature : E LEE
Robert E. Lee is of course renowned as a southern officer in the Civil War. He was a somewhat reluctant participant in the war in that Lee opposed the secession of his home state of Virginia from the Union. At the beginning of the war, President Lincoln invited Lee to take command of the whole Union Army but Lee declined, choosing instead to stay loyal to his home state.

63. Combination of rings? : ONE-TWO
Thanks to a kind blog reader I now see that a “one-two” combination of punches can be seen in a boxing ring.

Down
1. Concave kitchenware : WOKS
“Wok” is a Cantonese word, the name of the frying pan now used in many Asian cuisines.

2. Kerfuffle : HOO-HA
“Kerfuffle” comes from the Scottish “curfuffle”, with both words meaning “disruption”.

5. Stone picture : JFK
“JFK” is a 1991 Oliver Stone movie, a controversial one I’d say. I suppose any work that deals with the terrible assassination of President Kennedy is bound to create a stir these days. By the way, make a note in your diary. According to US law, all documents held by the government that are related to the assassination are supposed to be released to the public by 2017 …

9. Bird that lays a one-pound egg : KIWI
The kiwi is an unusual bird in that it has a highly developed sense of smell and is the only one of our feathered friends with nostrils located at the tip of its long beak.

27. Household helper : AU PAIR
An “au pair” is a domestic assistant from a foreign country working and living as part of a host family. The term “au pair” is French, and means “on a par”, indicating that an au pair is treated as an equal in the host family.

31. “Felicity” star Russell : KERI
The TV drama called “Felicity” stars Keri Russell in the title role of Felicity Porter, and ran from 1998 to 2002. One of Felicity’s classmates is Elena Tyler, played by Tangi Miller. I am afraid I have never seen this one …

33. Galley order : STET
“Stet” is the Latin word meaning “let it stand”. In editorial work, the typesetter is instructed to disregard any change previously marked by writing the word “stet” beside the change and then underscoring the change with a line of dots (or dashes).

Galleys are the metal trays into which a printer would arrange type to make up a page. The galleys had clamps that could be used to hold the loose type in place. Even in today’s world of electronic publishing, apparently the term “galley proof” is still used as the name for some version of a layout that is not yet final.

34. Setting of a Barry Manilow hit : COPA
The Copacabana of song is the Copacabana nightclub in New York City (which is also the subject of the Frank Sinatra song “Meet Me at the Copa”). The Copa opened in 1940 and is still going today although it is struggling. The club had to move due to impending construction and is now “sharing” a location with the Columbus 72 nightclub.

45. Imposing a general liability, legally : IN REM
“In rem” translates from Latin as “in a thing”. In a lawsuit, an action is described as “in rem” if it is directed against some property. This would be the case if someone disputes ownership of a piece of land, for example. An action “in personam” on the other hand, is directed against a specific individual.

56. Basic solutions : LYES
Today, when we purchase what is labelled as “lye”, it is caustic soda (sodium hydroxide). To clean out drains we might buy Crystal Drano which is sodium hydroxide (lye) mixed with sodium nitrate, sodium chloride (table salt) and aluminum. The contents of Drano work in concert to clear the clog. The lye reacts with any fats creating soap which may be enough to break up the clog. Also, the finely divided aluminum reacts with water creating tremendous heat so that that mixture boils and churns, then any hair or fibers are cut by the sharp edges of the nitrate and chloride crystals. Having said all that, I find that boiling water poured down the drain almost always does the job …

58. 1969 Peace Prize grp. : ILO
The ILO (International Labour Organization) is an agency now administered by the UN, but it was established by the League of Nations after WWI. The ILO deals with important issues such as health and safety, discrimination, child labor and forced labor. The organization was recognized for its work in 1969 when it was awarded the Nobel Peace Prize.