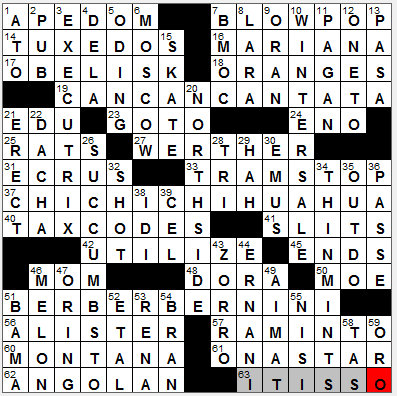 CROSSWORD SETTER: Byron Walden
THEME: The The Theme … each of the themed answers is comprised of two words, the first of which is just the starting syllable of the second word, repeated. As an added bonus, each answer ends with a repeated syllable:

19A. Bach work performed at the Moulin Rouge? : CAN-CAN CAN(TATA)
37A. One spotted at the Rodeo Drive Taco Bell? : CHICHI CHI(HUAHUA)
51A. North African counterpart to an Italian Baroque sculptor? : BERBER BER(NINI)

Today’s Wiki-est, Amazonian Googlies
Across
1. Tarzan’s realm : APEDOM
“Tarzan” is the title character in the series of books created by Edgar Rice Burroughs. The line “Me Tarzan, you Jane” never appeared in the books, and indeed doesn’t even figure in the movies. Apparently Johnny Weissmuller (who played Tarzan in the thrities and forties) saw Maureen O’Sullivan (“Jane”, to Weismuller’s “Tarzan”) struggling with a suitcase in the parking lot during filming. He grabbed the bag from her, jokingly saying “Me Tarzan, you Jane”, and people have been quoting those words ever since.

7. Composite candy treat : BLOW POP
Blow Pops are lollipops with a hard candy shell containing bubblegum in the center. I’ve never had one, and quite frankly, I doubt I ever will …

14. Some gala wear : TUXEDOS
The style of men’s evening dress called a “tuxedo” was apparently first worn to a country club event in 1886 in New York. The use of a dark dinner jacket without tails became fashionable at the club with the members, and the tradition spread from there. The country club was located in Tuxedo Park, New York, giving the style of dress its name.

16. ___ Trench (deepest ocean spot on earth) : MARIANA
The “Mariana” Trench is the lowest elevation on the surface of the Earth’s crust. The Mariana Trench takes its name from the nearby Mariana Islands in the northwest Pacific Ocean.

19. Bach work performed at the Moulin Rouge? : CAN-CAN CANTATA
The Moulin Rouge cabaret is located right in the middle of one of the red light districts of Paris, the district of Pigalle. You can’t miss the Moulin Rouge as it has a huge red windmill on its roof (“moulin rouge” is French for “red windmill”). The nightclub opened its doors in 1889 and soon after, the working girls of the cabaret adopted a “respectable” party dance and used it to entice their clients. That was the birth of the can-can. Nowadays, the Moulin Rouge is home to a lavish, Las Vegas-style show that costs millions of euros to stage. It features showgirls, dancers and acrobats, a whole host of entertainers in fact. And I am sure the can-can features as well …

24. Rock producer Brian : ENO
Brian Eno started out his musical career with Roxy Music. However, Eno’s most oft-played composition (by far!) is Microsoft’s “start-up jingle”, the 6-second sound you hear when the Windows operating system is booting up.

27. Massenet opera based on a work of Goethe : WERTHER
“The Sorrows of Young Werther” is a novel by Johann Wolfgang von Geothe, first published in 1774. The piece is described as being loosely autobiographical, and it brought fame and success to Goethe as a writer within his own lifetime. Just over a century after Goethe finished his novel, Jules Massenet adapted it into an opera that he called simply “Werther”.

31. Neutral shades : ECRUS
The shade called ecru is a grayish, yellowish brown. The word “ecru” comes from French and means “raw, unbleached”. “Ecru” has the same roots as our word “crude”.

37. One spotted at the Rodeo Drive Taco Bell? : CHICHI CHIHUAHUA
Someone who is “chichi” is showily trendy and pretentious.

There’s a three-block stretch of Rodeo Drive in Beverly Hills, California that is known for expensive shopping, mainly in designer clothes stores.

Taco Bell used a chihuahua in its advertising starting in 1997. Although two dogs were used in the campaigns, the “principal” player was a chihuahua called Gidget. Gidget had quite the life. She travelled first class, rang the opening bell in the New York Stock Exchange and appeared at Madison Square Garden. Gidget also appeared as the chihuahua in the 2002 movie “Legally Blonde 2”.

46. May V.I.P. : MOM
Note the official punctuation in “Mother’s Day”, even though one might think it should be “Mothers’ Day”. President Wilson, and Anna Jarvis who created the tradition, specifically wanted Mother’s Day to honor the mothers within each family and not just “mothers” in general, so they went with the “Mother’s Day” punctuation.

48. Toon with a singing map : DORA
“Dora the Explorer” is a cartoon series shown on Nickelodeon. Part of Dora’s remit is to introduce the show’s young viewers to some Spanish words and phrases.

50. Name shared by a Broadway quintet : MOE
“Five Guys Named Moe” is a musical that debuted in the West End of London in 1990, and two years later on Broadway. The music and lyrics were written by jazz musician Louis Jordan based on a book by Clarke Peters. By the way, you might have seen Clarke Peters on the HBO television hit “The Wire”, in which he played Detective Lester Freamon.

51. North African counterpart to an Italian Baroque sculptor? : BERBER BERNINI
The Berber peoples live in North Africa, west of the Nile. Most of the Berbers can now be found in Morocco.

Gian Lorenzo Bernini was an Italian artist, generally regarded as the successor to Michelangelo.

60. State with a bison skull on its quarter : MONTANA
The Montana State Quarter was released in January 2007. The quarter features the skull of an American bison and a background showing mountains and the Missouri River. There is also a caption saying “Big Sky Country”.

62. Kwanza spender : ANGOLAN
The Kwanza is the currency of the African country Angola. The currency is no relation to the North American holiday, which is spelled “Kwanzaa”.

Down
3. Woman with great will power? : EXECUTRIX
An executrix is a female executor of a will. Nice word …

6. Idaho city : MOSCOW
Moscow, Idaho is home to the University of Idaho. In its early days the city was known as Paradise Valley, and the name changed to Moscow in 1875. The choice of “Moscow” seems unexplained, but it is more likely related to Moscow, Pennsylvania than Moscow, Russia.

8. ___ Croft, comic book heroine : LARA
Lara Croft was first introduced to the world as the main character in a pretty cool video game (I thought) called “Tomb Raider”, back in 1996. Lara Croft moved to the big screen in 2001 and 2003, in two pretty awful movie adaptations of the game’s storyline. Angelina Jolie played Croft, and she did a very energetic job.

9. Algeria’s second-largest city : ORAN
Oran lies on the Algerian coast, and is famous for being the port where the French Navy was largely destroyed by the British during WWII in order to avoid the French vessels falling into the hands of Nazi Germany after France surrendered. This decisive and unexpected action by the British sent a very strong message around the world that Britain was willing to fight alone against the axis powers if necessary.

11. Baal worshiper, say : PAGAN
A pagan is someone who holds religious beliefs that are different from the main religions of the world. In classical Latin “paganus” was a villager, a rustic.

“Ba’al” can actually refer to any god, and sometimes even human officials as it can also be used as an honorific title. Ba’al can also be known as Hada, a god of rain, thunder, agriculture and fertility.

20. Area of Chicago where Wrigley Field is located : NORTH SIDE
The famous ballpark that is home to the Chicago Cubs was built in 1914. Back then it was known as Weegham Park, before becoming Cubs Park when the Cubs arrived in 1920. It was given the name Wrigley Field in 1926, after the owner William Wrigley, Jr. of chewing gum fame.

30. Dingo prey : EMUS
The dingo is a wild dog of Australia. The dingo is thought to have originated from domesticated dogs that were brought to Australia with humans that settled the land centuries ago.

34. Girl Scout offering : THIN MINTS
Depending on which bakery makes the particular variety of Girl Scout cookie, the name can vary. For example, Little Brownie Bakers makes the Samoa cookies, while ABC Bakers uses the same recipe and calls the cookies Caramel Delites. The assumption is that these cookies have the exotic name of “Samoa” because they contain the tropical ingredients of coconut and cocoa.

38. Tyrant Amin : IDI
Idi Amin received most of his military training in the British armed forces, eventually achieving the highest rank possible for a Black African in the British Colonial Army in 1959, that of Warrant Officer. On his return to Uganda Amin joined his country’s military and quickly rose to the rank of Deputy Commander of the Army. During that time he was quite the athlete. He was a noted rugby player and swimmer, and for nine years held the Ugandan national light-heavyweight boxing title. By the early seventies, Amin was commander of all the armed forces of Uganda and in 1971 seized power in a military coup, displacing the country’s president Milton Obote. There followed seven years of brutal rule by Amin during which it is estimated that between 100,000 and 500,000 people were murdered. Amin was ousted from power in 1979 after a war with Tanzania, and fled to Libya where he stayed for a year. He then moved to Saudi Arabia, where he was financially supported by the Saudi Royal Family for the remainder of his life. He died in 2003.

39. Animation collectible : CEL
In the world of animation a cel is a transparent sheet on which objects and characters are drawn. In the first half of the 20th century the sheet was actually made of celluloid, giving the “cel” its name.

43. Silver screen swashbuckler : ZORRO
The character Zorro was created by Johnston McCulley in 1919 for a series of stories and pulp fiction. The name “Zorro” is the secret identity of a Spanish colonial nobleman called Don Diego de la Vega. “Zorro” is Spanish for “fox”.

44. Verdi opera set in Aragon : ERNANI
“Ernani” is an opera by Giuseppe Verdi, first performed in 1844 in Venice. “Ernani” has the distinction of being the first opera ever to be recorded in completion, by HMV in England in 1904. The recording took up 40 single-sided, vinyl discs.

53. Soap actress Sofer : RENA
Rena Sofer came to prominence as an actor in daytime television, most notably playing Lois Cerullo on “General Hospital”. Sofa’s love interest on the show was played by Wally Kurth, and the online romance led to the pair walking down the aisle in real life in 1995 (although they divorced two years later).

55. Not finalized, at law : NISI
A decree nisi is a court order, one that only comes into force when certain specified conditions are met. At the point where the conditions are met, it becomes a decree absolute and is binding. “Nisi” is Latin for “unless”.

59. Metal in 60-Across’s motto : ORO
“Oro y Plata” means “gold and silver”, and is the state motto of Montana. The motto was written in Spanish, solely because “it had a nice ring to it”.