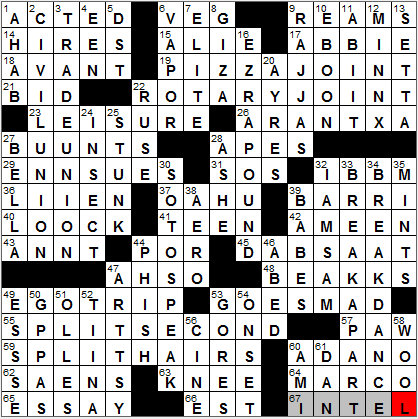 CROSSWORD SETTER: Ben Pall
THEME: Merged and Separated … today’s grid contains some squares that have been merged. The merged-squares form words with related meanings: JOINT, SPLIT, UNION and BREAK. I’ve just repeated the merged letters in the grid illustrated above:

19A. Italian hangout : PIZZA JOINT
22A. There’s one between the ulna and the radius : ROTARY JOINT


Today’s Wiki-est, Amazonian Googlies
Across
9. Bawls out : REAMS
I must admit that I find the slang term “to ream”, with its meaning “to scold harshly”, quite distasteful. The usage of the word as a reprimand dates back to about 1950.

17. Hoffman who co-founded the Yippies : ABBIE
Abbie Hoffman was the founder of the “Yippies”, an activist group that had violent clashes with the police during the 1968 Democratic National Convention in Chicago.

18. Culturally ahead of the times : AVANT
“Avant” is the French for “before”.

19. Italian hangout : PIZZA JOINT
Pizza was invented in Naples where it has a long tradition that goes back to Ancient Rome. During an 1889 visit to Naples, Queen Margherita of Savoy was served a special pizza that was created with toppings designed to mimic the colors of the Italian flag. The ingredients of tomato (red), mozzarella (white) and basil (green) can still be found together on menus today on a pie usually named Pizza Margherita after the queen. I do love basil on my pizza …

26. Tennis’s Sánchez Vicario : ARANTXA
Arantxa Sánchez Vicario is a former World No. 1 tennis player from Barcelona, Spain. Vicario earned about 60 million dollars over her career, and yet in 2012 she found herself struggling and is in debt. Reportedly her parents “lost” all of their daughter’s money.

27. Minor hits? : BUNTS
To bunt in baseball is to barely hit the ball, just enough to have it roll slowly in front of the infielders.

31. Long-distance call? : SOS
The combination of three dots – three dashes – three dots, is a Morse signal first introduced by the German government as a standard distress call in 1905. The sequence is remembered as the letters SOS (three dots – pause – three dashes – pause – three dots), although in the emergency signal there is no pause between the dots and dashes, so SOS is in effect only a mnemonic. Similarly, the phrases “Save Our Souls” and “Save Our Ship” are also mnemonics, introduced after the “SOS” signal was adopted.

32. Creator of U.P.C.’s : IBM
IBM was founded as the Tabulating Machine Company in 1896. It changed its name to the Computing Tabulating Recording Corporation (CTR) in 1911, and was listed on the New York Stock Exchange in 1916. The name of International Business Machines (IBM) was given first to the company’s Canadian subsidiary, and then its South American subsidiary. In 1924, it was decided to adopt the International Business Machines name for the whole company. Good choice …

UPC stands for Universal Price Code or Universal Product Code. The first UPC-marked item to get scanned in a store was on June 26, 1974 at 08:01 a.m. at Marsh’s supermarket in Troy, Ohio. It was a 10-pack of Wrigley’s Juicy Fruit chewing gum …

36. Home security measure : LIEN
A lien is the right that one has to retain or secure someone’s property until a debt is paid.

37. It was created by two volcanoes : OAHU
O’ahu has been called “The Gathering Place”, although the word “O’ahu” has no translation in Hawaiian. It seems that O’ahu is simply the name of the island. One story is that it is named after the son of the Polynesian navigator that first found the islands. The island is made up of two volcanoes, Wai’anae and Ko’olau, joined together by a broad valley, the O’ahu Plain.

39. Italian city associated with the real-life Saint Nicholas : BARI
Saint Nicholas of Myra is the inspiration for Santa Claus. Nicholas was the Bishop of Myra (now in modern-day Turkey) during the 4th century AD, and was known for being generous to the poor. Centuries after he died, his remains were desecrated by Italian sailors and moved to Bari in Italy. One legend has it that the relics were moved again centuries later and reburied in the grounds of Jerpoint Abbey in Co. Kilkenny in Ireland, where you can visit the grave today. I choose to believe that Santa Claus’s relics are indeed buried in Ireland …

40. Tumbler locale : LOCK
The tumbler is that part of a lock that is moved by the key.

43. Fire ___ : ANT
Fire ants are stinging ants. Most stinging ants bite their prey and then spray acid on the wound. The fire ant however, bites to hold on and then injects an alkaloid venom from its abdomen, creating a burning sensation in humans that have been nipped.

60. Town in a Hersey novel : ADANO
“A Bell for Adano” is a novel written by John Hersey. Hersey’s story is about an Italian-American US Army officer, Major Joppolo, who found a replacement for a town’s bell stolen by fascists. “A Bell for Adano” was made into a film in 1945, the same year the novel won a Pulitzer.

62. Composer Camille Saint-___ : SAENS
Camille Saint-Saens was one of the great French composers in my opinion. Even his light and airy “The Carnival of the Animals” is a magnificent work.

66. Wilfred Owen’s “Dulce et Decorum ___” : EST
Wilfred Owen was an English soldier and noted poet, famous for writing realistic poetry about the tragedies of trench warfare during WWI. Owen was killed in action only one week before the war ended, so most of his work was published posthumously.

67. Pentium source : INTEL
Intel is the world’s largest manufacturer of semiconductor chips. The company was founded in 1968, and the name “Intel” is a derived from the term “int(egrated) el(ectronics)”.

Down
1. Fictional character who says “I now prophesy that I will dismember my dismemberer” : AHAB
Captain Ahab is the obsessed and far from friendly Captain of the Pequod in Herman Melville’s “Moby Dick”.

2. Domestic relationship : CIVIL UNION
A civil union or civil partnership is a relationship similar to marriage that has been recognized in law. The first civil unions were established in 1989 in Denmark.

5. What Ariz. and Hawaii are the only two states not to have : DST
On the other side of the Atlantic, Daylight Saving Time (DST) is known as “summer time”. The idea behind summer/daylight-savings is to move clocks forward an hour in spring and backwards in the fall so that afternoons have more daylight. DST was first observed in the US in 1918, and is observed in all states other than Hawaii and Arizona. Hawaii doesn’t really “need” DST as the length of daylight doesn’t vary much due to the state’s tropical latitude. Arizona’s climate dictates that extra afternoon daylight is an economic burden due to increased use of air conditioning systems.

8. Suburb of Cairo : GIZA
Giza is located on the west bank of the Nile, about 20km southwest of Cairo. The nearby Giza Plateau is home to some of the most amazing ancient monuments on the planet, including the Great Pyramid of Giza and the Great Sphinx.

9. Indian nobles : RAJAS
“Raja” is an Indian word for “monarch”.

10. Jet : EBON
Ebony is another word for the color black (often shortened to “ebon” in poetry). Ebony is a dark black wood that is very dense, one of the few types of wood that sinks in water. Ebony has been in high demand so the species of trees yielding the wood are now considered threatened. It is in such short supply that unscrupulous vendors have been known to darken lighter woods with shoe polish in order to look like ebony, so be warned …

The color “jet black” takes its name from the minor gemstone known as jet. The gemstone and the material it is made of takes its English name from its French name: “jaiet”.

12. Flirt : MINX
A minx is a flirtatious woman. The term derives from the 16th-century word “mynx” used for a pet dog.

16. Poet who made radio broadcasts in support of Mussolini : EZRA POUND
Ezra Pound was an American poet who spent much of his life wandering the world, spending years in each of London, Paris, and Italy. In Italy, Pound’s work and sympathies for Mussolini’s regime led to his arrest at the end of the war. His major work was the epic, albeit incomplete, “The Cantos”. The poem is divided into 120 sections, each known as a canto.

20. Actor Lew : AYRES
The Hollywood actor Lew Ayres got his big break in “All Quiet On the Western Front”. Famously, Ayres was a pacifist during WWII and served with the Medical Corps. His private life wasn’t too dull. He was married three times, Lola Lane and Ginger Rogers being wives one and two. Lew Ayres was also the man for whom actress Jane Wyman left her husband, Ronald Reagan, although that relationship did not go very far.

24. Six-footer? : INSECT
An insect is a six-legged arthropod i.e. a hexapod.

28. Queens’s ___ Stadium : ASHE
The Arthur Ashe Stadium in Queens, New York opened in 1997 and is the largest outdoor, tennis-only venue in the world. The stadium is sometimes criticized for not having a retractable dome to protect the playing surface from inclement weather.

32. 2001 Sean Penn film : I AM SAM
“I Am Sam” is a 2001 drama movie starring Sean Penn. Penn plays a man with a developmental disability who is raising a young daughter alone after her mother abandoned the family.

38. Houston ice hockey pro : AERO
The Aeros are the professional ice hockey team based in Houston, Texas. The Houston Aeros were added to the International Hockey League in 1994. The franchise name was taken from the World Hockey Association’s Houston Aeros of the seventies, the team for whom Gordie Howe played.

44. Pursue some e-mail chicanery : PHISH
Phishing is the name given to the online practice of stealing user names, passwords and credit card details by creating a site that deceptively looks reliable and trustworthy. Phishers often send out safe-looking emails or instant messages that direct someone to an equally safe-looking website where the person might inadvertently enter sensitive information. “Phishing” is a variant of the word “fishing”, as in “fishing for passwords, PIN numbers etc.”

49. Actual, after “in” : ESSE
The Latin term “in esse” is used to mean “actually existing”, and translates as “in being”.

51. Some stadium cries : OLES
“Ole Ole Ole!” is chanted at soccer games by many Spanish-speaking (or -shouting!) fans. I am very proud to claim that the fans of the Irish national team have adopted the chant as their own, and it can be heard practically non-stop when Ireland is playing (with some inventive melody behind it!).

52. Editor Brown : TINA
Tina Brown is a British journalist, best known in America as author of “The Diana Chronicles”, a biography of Diana, Princess of Wales, of whom Brown was a personal friend. Brown has turned her attention to this side of the Atlantic and is reportedly working on a book about Hillary and Bill Clinton.

61. Writer Brown : DAN
“The Da Vinci Code” is an excellent story, written by Dan Brown. However, Brown’s first book to feature the character Robert Langdon was even better in my opinion, namely “Angels & Demons”.