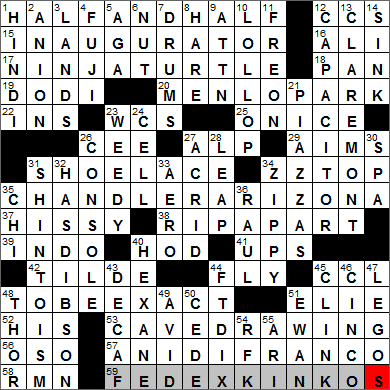 Today’s Wiki-est, Amazonian Googlies
Across
1. Java application? : HALF AND HALF
Back in 1850, the name “java” was given to a type of coffee grown on the island of Java, and the usage of the term spread from there.

12. E-mails a dupe : CCS
I wonder do the kids of today know that “cc” stands for carbon copy, and do they have any idea what a carbon copy was? Do you remember how messy carbon paper was to handle?

16. Onetime giant in decking : ALI
Cassius Marcellus Clay, Jr. was born in 1942 in Louisville, Kentucky. Clay changed his name to Muhammad Ali when he converted to Islam in 1964. Who can forget Muhammad Ali lighting the Olympic flame for the 1996 games in Atlanta? Ali was presented with a gold medal during those ’96 Games, a replacement for the medal he won at the 1960 Olympics. He had thrown the original into the Ohio River as a gesture of disgust after being refused service at a “whites only” restaurant.

17. Raphael, e.g. : NINJA TURTLE
The “Teenage Mutant Ninja Turtles” started out as a parody of comic book superheroes, first appearing in a self-published comic book in 1984. A couple of years later the characters were picked up by someone who built a whole line toys around the characters, and then television and movies followed. Do you remember the names of all four of the Turtles? Their names were all taken from Renaissance artists:

18. It may have no stars : PAN
I think the idea here is that a “pan” is a severe criticism, say of a movie or play. A critic who pans a film might give it no stars.

19. Film producer Fayed : DODI
Dodi Al-Fayed was a film producer from Egypt, and the son of Mohamed Al-Fayed, the billionaire owner of Harrod’s department store in London and the Hôtel Ritz Paris. Famously, Dodi was romantically involved with Princess Diana of the UK, and died with her in a car crash in Paris in 1997.

20. Birthplace of the phonograph : MENLO PARK
Thomas Alva Edison was nicknamed “The Wizard of Menlo Park” by a newspaper reporter, a name that stuck. He was indeed a wizard, in the sense that he was such a prolific inventor. The Menlo Park part of the moniker recognizes the location of his first research lab, in Menlo Park, New Jersey.

23. Heads across the pond : WCS
When I was growing up in Ireland, a “bathroom” was a room that had a bath and no toilet. The separate room with the commode was called “the toilet” or sometimes the W.C. (the water closet). Apparently the term closet was used because in the 1800s when homeowners started installing toilets indoors they often displaced clothes and linens in a “closet”, as a closet was the right size to take the commode. It has been suggested that the British term “loo” comes from Waterloo (water-closet … water-loo), but no one seems to know for sure. Another suggestion is that the term comes from the card game of “lanterloo” in which the pot was called the loo!

35. City of a quarter million founded on a ranch site : CHANDLER, ARIZONA
The city of Chandler, Arizona is in effect a suburb of Phoenix. The city was named after a Dr. Alexander Chandler who settled in the area in 1891. Alexander Chandler was the first veterinary surgeon to come to the Arizona Territory.

39. Prefix with Germanic : INDO-
‘Indo-Germanic” is a term used to describe a specific group of languages and is synonymous with the term “Indo-European”.

The Indo-European languages are a large group that includes most of the major languages of Europe, the Iranian plateau and South Asia. It is the largest grouping of languages in the world.

40. Three-sided carrier : HOD
A hod is 3-sided box on the the end of a long handle used for carrying bricks (and sometimes mortar) at a construction site, usually up and down ladders.

42. Piña colada topping? : TILDE
Piña colada is a Spanish term which translates into “strained pineapple”. The cocktail was introduced in the Caribe Hilton in 1954, and since 1978 it has been the official beverage of Puerto Rico. Yum …

57. Singer who founded Righteous Babe Records : ANI DIFRANCO
Ani DiFranco is a folk-rock singer and songwriter. DiFranco has also been labeled a “feminist icon”, and in 2006 won the “Woman of Courage Award” from National Organization of Women.

58. Victor over H.H.H. : RMN
President Richard Milhous Nixon had “Milhous” in his name as his mother was Hannah Milhous. Richard was born in a house in Yorba Linda, California. You can visit that house today as it is on the grounds of the Richard Nixon Presidential Library. It’s a really interesting way to spend a few hours if you ever get to Yorba Linda …

Down
1. Origin of the word “cheetah” : HINDI
The cheetah can run faster than any other land animal, achieving speeds of 70-75 mph. The name “cheetah” comes from Sanskrit via Hindi, from the word for “variegated”. Something that is variegated has different colored zones, like the mottled hide of the cheetah.

“F-” is the fluorine anion.

4. It blew in 1707 : FUJI
Mount Fuji is Japan’s highest and most famous mountain. It is an active volcano, situated just west of Tokyo.

5. Ottoman dignitary : AGA
“Aga” (also “agha”) is a title that was used by both civil and military officials in the Ottoman Empire.

Osman I was the man who established the Ottoman Dynasty, with “Ottoman” coming from the name “Osman”. This is despite the fact that the “Ottoman Empire” was really established with the conquest of Constantinople, and that didn’t happen until almost 130 years after Osman I died.

8. Storied slacker : HARE
“The Tortoise and the Hare” is perhaps the most famous fable attributed to Aesop. The hare takes a nap during a race against the tortoise, and the tortoise sneaks past the finish line first while his speedier friend is sleeping.

10. Move with a bobbing motion : LOLLOP
To lollop along is to move in a very ungainly way, clumsily bounding along.

11. Common cooler : FREON
Freon is a tradename for a group of compounds used as a refrigerant and also as a propellant in aerosols.

13. Home of Pomona College : CLAREMONT
Pomona College is a private school in Claremont, California in Los Angeles County. The name “Pomona” comes from the original location of the college in Pomona, California. The college opened for classes in Pomona in a rental house in 1888. The following year it moved to the site of an unfinished hotel in Claremont, but retained the Pomona name.

24. Mobile : CELL
What we mostly call a cell phone here in North America is more usually referred to as a mobile phone in Europe.

26. Wii, for one : CONSOLE
The Wii is the biggest-selling game console in the world. Two distinguishing features are the impressive wireless remote control and its WiiConnect24 system which allows the console to get messages and updates wirelessly in standby mode. I have my kids unplug the darn thing when they aren’t using it, as even in standby mode it sucks up bandwidth on my wireless network here at the house.

31. Its central deity is Amaterasu : SHINTOISM
It is perhaps best not to describe Shinto as a religion, but more as a “spirituality of the Japanese people”, a spirituality that encompasses folklore, history and mythology. Having said that, “Shinto” translates literally as “Way of the Gods”. Most people in Japan who are described as practicing Shinto, also practice Buddhism.

Amaterasu is a Shinto deity, the goddess of the sun and the universe. The Emperor of Japan is said to be directly descended from Amaterasu.

35. Eastern energy : CHI
In Chinese culture “qi” or “chi” is the life force in any living thing.

36. 1980s Argentine president Alfonsín : RAUL
Raul Alfonsín was the President of Argentina from 1983 to 1989. Alfonsín was the first democratically elected president to take office after the military dictatorship that was in place from 1976.

40. Hydrocarbon in gasoline : HEXANE
A hexane is a hydrocarbon, an alkane with six carbon atoms. Hexanes of varying types are major components of gasoline.

44. Neighbor of McGuire A.F.B. : FT DIX
Fort Dix is the name commonly used for what is now more correctly called Joint Base McGuire -Dix-Lakehurst, a US Army base located near Trenton, New Jersey. Fort Dix was established in 1917 by the Army, and was consolidated with nearby Air Force and Navy facilities in 2009.

47. Toy snappers : LEGOS
Lego is manufactured by Lego Group, a privately held company headquartered in Billund, Denmark. The company was founded by a carpenter called Ole Kirk Christiansen in 1934 and the now-famous plastic interlocking blocks were introduced in 1949. The blocks were originally sold under the name “Automatic Binding Bricks” but I think “Lego” is easier to remember! The name “Lego” comes from the Danish term “leg godt” meaning “play well”.

48. Dweller in the hall Bilskirnir : THOR
In Norse mythology, Odin was the chief of the gods. Odin’s wife Frigg was the queen of Asgard whose name gave us our English term “Friday” (via Anglo-Saxon). Odin’s son was Thor, and his name gave us the term “Thursday”.

51. Actor McGregor : EWAN
Ewan McGregor is a very talented Scottish actor, one who got his break in the 1996 film “Trainspotting”. McGregor’s first big Hollywood role was playing the young Obi-Wan-Kenobi in the “Star Wars” prequels. Less known is his televised marathon motorcycle journey from London to New York via central Europe, Ukraine, Siberia, Mongolia and Canada. The 2004 trip was shown as “Long Way Round” on TV. McGregor did a similar trip in 2007 called “Long Way Down”, which took him and the same travelling companion from the north of Scotland to Cape Town in South Africa.

54. N.Y.C.’s ___ Bridge : RFK
The Robert F. Kennedy Bridge in New York City is often referred to as the “Triboro”, recognition of the structure’s original name “The Triborough Bridge”. This name was given as the Triboro is actually a complex of three bridges that connects the boroughs of Manhattan, Queens and The Bronx. Built in 1936, the official name was changed to the Robert F. Kennedy Bridge in 2008.