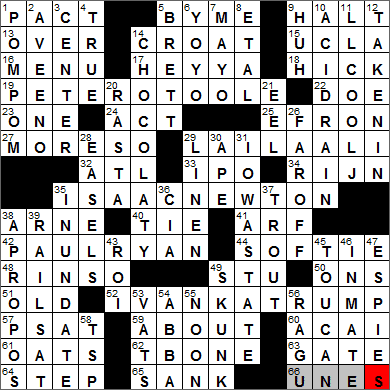 CROSSWORD SETTER: Joel Fagliano
THEME: Celebrities, Initially … each of the themed answers is the name of a celebrity, with the clue containing the initials of that celebrity “disguised” as an acronym or 2-letter word:

Today’s Wiki-est, Amazonian Googlies
Across
13. Finito : OVER
“Finito” is the Italian word for “finished”.

14. Balkan native : CROAT
The Republic of Croatia is a Balkan country. The Croats declared independence from Yugoslavia in 1991.

15. Jackie Robinson’s alma mater : UCLA
The great Jackie Robinson was of course the first African-American to play in baseball’s Major League. When Robinson made his first MLB appearance, for the Brooklyn Dodgers, he did so in front of over 26,000 spectators. Well over half the crowd that day were African-Americans, there to witness the event. Major League Baseball universally retired Robinson’s number 42 in 1997. However, on the annual Jackie Robinson Day, all MLB players on all teams wear #42 in his honor.

18. Bumpkin : HICK
“Bumpkin” is really a not so nice term for someone from the country. The term has an even less nice derivation. It comes from from the Middle Dutch “bommekijn” meaning “little barrel”. “Bumpkin” was used as a derogatory term for Dutch people, who were regarded as short and plump.

19. Po boy? : PETER O’TOOLE (P.O.)
Irish actor Peter O’Toole got his big break in movies when he played the title role in the 1962 epic film “Lawrence of Arabia”. But my favorite of O’Toole’s movies is much lighter fare: “How to Steal a Million” in which he stars opposite Audrey Hepburn.

22. Female kangaroo : DOE
The name “kangaroo” comes from the Australian Aborigine term for the animal. There’s an oft-quoted story that the explorer James Cook (later Captain Cook) asked a local native what was the name of this remarkable-looking animal, and the native responded with “kangaroo”. The story is that the native was actually saying “I don’t understand you”, but as cute as that tale is, it’s just an urban myth.

25. Teen heartthrob Zac : EFRON
Zac Efron is an actor from San Luis Obispo, California. Apparently Efron is a heartthrob to “tweenyboppers”. His big break was in the Disney hit movie “HIgh School Musical”.

29. L.A. woman? : LAILA ALI (L.A.)
Laila Ali is the daughter of the great Muhammad Ali and is a very capable boxer in her own right. Laila is not a bad dancer either, coming in third place in the fourth season of “Dancing with the Stars”.

33. Notable 2012 Facebook event, for short : IPO
An Initial Public Offering (IPO) is the very first offer of stock for sale by a company on the open market. In other words, an IPO marks the first time that a company is traded on a public exchange. Companies have an IPO to raise capital to expand (usually).

35. In person? : ISAAC NEWTON (I.N.)
Sir Isaac Newton was of course one of the most influential people in history, the man who laid the groundwork for all of classical mechanics. The story about an apple falling on his head, inspiring him to formulate his theories about gravity, well that’s not quite true. Newton often told the story about observing an apple falling in his mother’s garden and how this made him acutely aware of the Earth’s gravitational pull. However, he made no mention of the apple hitting him on the head.

38. Obama education secretary Duncan : ARNE
Long before Arne Duncan became Secretary of Education he was a professional basketball player, but not in the NBA. He played for the National Basketball League of Australia, for the Eastside Spectres in Melbourne.

41. Chow line? : ARF
The Chow Chow (sometimes just “Chow”) is a breed of dog that originated in China. The Chinese name for the breed is “Songshi Quan”, which translates as “puffy-lion dog”, a rather apt name given its appearance …

42. P.R. man? : PAUL RYAN (P.R.)
Paul Ryan was the Republican nominee for Vice President in the 2012 election, on the ticket with Mitt Romney. Off the political stage, Ryan is famous for his fitness regime. He has shared that much of his motivation to work out and to watch his diet is because there is a history of heart attacks at an early age in his family.

48. Detergent brand : RINSO
Rinso was a laundry detergent first manufactured in England in 1908 by a company called Hudson’s Soap. The detergent was introduced into the US in 1918. In America, Rinso took to radio advertising and sponsorship in the days of “soap operas”. Rinso’s most famous program association was with “The Amos ‘n’ Andy Show” in the forties. One of the brand’s slogans was “Solium, the sunlight ingredient”. I have no idea what Solium is, but it certainly did sell a lot of Rinso!

52. It girl? : IVANKA TRUMP (I.T.)
Ivanka Trump is the daughter of Ivana and Donald Trump. Ivanka is an Executive Vice President in her father’s company and acts as a judge alongside the Donald on the TV show “The Apprentice”.

The National Merit Scholarship Program is a privately funded, not-for-profit organization that was founded in 1955. The program governs two annual competitions for scholarships, one open to all students and one open to only African Americans.

60. Antioxidant berry : ACAI
Açaí is a palm tree native to Central and South America. The fruit has become very popular in recent years and its juice is a very fashionable addition to juice mixes and smoothies.

62. Steak cut : T-BONE
The T-bone and porterhouse are related cuts of meat, with the latter being a larger version of the former (I think … I don’t eat meat!).

63. Scandal suffix : -GATE
The Watergate scandal is so named because it involved a break-in at the Democratic National Committee (DNC) headquarters in the Watergate office complex in Washington, D.C. The Watergate complex is made up of five units, three of which are apartment buildings, one an office building, and one a hotel-office building (which housed the DNC headquarters). Watergate led to the “-gate” suffix being used for many subsequent scandals.

Down
1. It might be shaken next to a field : POMPOM
The French call a ball made of tufted wool a “pompon”, a word that we imported into English directly as “pompon”. We use “pompon” to describe perhaps bobbles on some hats, or the tufted balls that are shaken by cheerleaders at sports events. Over time, the spelling “pompom” has become common in English, probably due to mishearing. To confuse matters a little, we also use the word “pom-pom”, which is a nickname for a British autocannon used mainly as an anti-aircraft weapon, particularly during WWII.

2. Johnson & Johnson skin-care brand : AVEENO
Aveeno is a manufacturer of skin care and hair care products that was founded in 1945. The name Aveeno comes from the Latin name for the common oat: “Avena sativa”.

6. It has its ups and downs : YO-YO
Would you believe that the first yo-yos date back to 500 BC? There is even an ancient Greek vase painting that shows a young man playing with a yo-yo. Centuries later Filipinos were using yo-yos as hunting tools in the 1500s. “Yo-yo” is a Tagalog (Filipino) word meaning “come-come” or simply “return”.

7. Tuna salad ingredient : MAYO
Mayonnaise originated in the town of Mahon in Menorca, a Mediterranean island belonging to Spain. The Spanish called the sauce “salsa mahonesa” after the town, and this morphed into the French word “mayonnaise” which we use in English today.

10. Environmental problem addressed in the Clean Air Act : ACID RAIN
Acid rain is any precipitation that is unusually acidic. The acidity in rain mainly comes from sulfur dioxide that is discharged into the atmosphere from industrial plants and volcanic eruptions.

14. Like many éclairs : CHOCOLATY
The name for the pastry known as an éclair is clearly French in origin. The French word for lightning is “éclair”, but no one seems to be too sure how it came to be used for the rather delicious bakery item.

20. Guy in dreads, say : RASTA
I must admit that I don’t really understand Rastafarianism. I do know that a “Rasta”, like Bob Marley, is a follower of the movement. Some say that Rastafarianism is a religion, some not. I also know that it involves the worship of Emperor Haile Selassie I of Ethiopia.

28. Stands in a studio : EASELS
The word “easel” comes from an old Dutch word meaning “donkey” would you believe? The idea is that an easel carries its load (an oil painting, say) just as a donkey would carry its load.

31. The Cyclones of the Big 12 : IOWA STATE
Iowa State University of Science and Technology (ISU) is located in Ames, Iowa. Among many other notable events, ISU created the country’s first school of veterinary medicine, in 1879.

36. “Homeland” org. : CIA
“Homeland” is a psychological drama shown on Showtime about a CIA officer who is convinced that a certain US Marine is a threat to the security of the United States. The show is based on a series from Israeli television called “Hatufim” (Prisoners of War”). I’m going to have to check this one out …

38. Suitable : APROPOS
“Apropos” comes into English directly from French, in which “à propos” means “to the purpose”. Note that we use the term as one word (apropos), but the original French is two words (à propos).

54. “Mamma Mia!” group : ABBA
The hit musical “Mamma Mia!” was written to showcase the songs of ABBA. I’m a big fan of ABBA’s music, so I’ve seen this show a couple of times and just love it. “Mamma Mia!” is such a big hit on the stage that on any given day there are at least seven performances going on somewhere in the world. There is a really interesting film version of the show that was released in 2008. I think the female lead Meryl Streep is wonderful in the movie, but the male leads, not so much …

56. Sauce brand : RAGU
The Ragu brand of pasta sauce is owned by Unilever. The name ” Ragù” is the Italian word for a sauce used to dress pasta, however the spelling is off a little. In Italian the word is “Ragù” with a grave accent over the “u”, but if you look at a jar of the Unilever sauce, it is spelled “Ragú” on the label, with an acute accent. Sometimes I think we just don’t try …