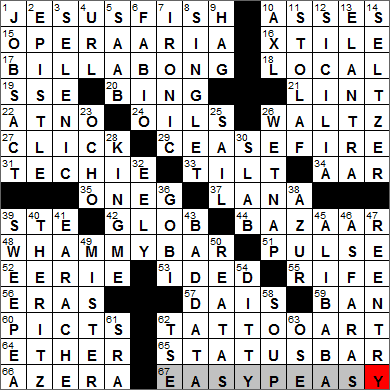 Today’s Wiki-est, Amazonian Googlies
Across
1. Religious emblem, informally : JESUS FISH
The Ichthys was a secret Christian symbol used in the early church. The symbol is composed of two intersecting arcs and resembles the profile of a fish. The Ichthys reemerged in the early 1970s as an icon for modern Christianity, at which time it was given the nickname “Jesus Fish”. Many Christians nowadays place the symbol on the rear of their cars or wear it as a pendant.

16. It’s worth 8 points in English and 10 points in French : X TILE
The game of Scrabble has been produced in many international versions, and each of these editions has its own tile distribution to suit the local language. For example, in English we have two tiles worth ten points: one “Q” and one “Z”. If you play the game in French then there are five tiles worth ten points: one “K”, one “W”, one “X”, one “Y” and one “Z”.

17. Backwater, in Australia : BILLABONG
A billabong is a small lake in Australia that has been formed when the path of a river changes leaving a section of the waterway with nowhere to go. Here in North America we call the same geographic feature an oxbow lake.

19. GPS heading : SSE
GPS stands for Global Positioning System. The modern GPS system that we use today was built by the US military who received the massive funding needed because of fears during the Cold War of the use of Intercontinental Ballistic Missiles. We civilians all round the world owe a lot to President Ronald Reagan because he directed the military to make GPS technology available to the public for the common good. President Reagan was moved to do so after the Soviet Union shot down KAL flight 007 carrying 269 people, just because the plane strayed accidentally into Soviet airspace.

20. A search may be done with it : BING
Bing is the search engine from Microsoft. Bing is the latest name for an engine that Microsoft used to call Live Search, Windows Live Search and MSN Search.

22. Figure on a table: Abbr. : AT NO
The atomic number of an element is also called the proton number, and is the number of protons found in the nucleus of each atom of the element.

26. Schubert piece : WALTZ
Franz Schubert was a classical composer from Vienna, Austria. Schubert produced a very large body of works that includes 600 Lieder (for which he is most noted) and nine symphonies. His level of output is particularly remarkable as he only lived to 31 years of age.

34. Alpine stream : AAR
The Aar (also called the “Aare” in German) is the longest river entirely in Switzerland. A famous spot along the Aar is the Reichenbach Falls in the center of the country, actually a series of waterfalls near the city of Meiringen. These falls are renowned in the world of literature as it was here that Sherlock Holmes fell to his supposed doom with his nemesis Professor Moriarty (in “The Adventure of the Final Problem”).

35. You can feel it on the ground, informally : ONE G
The force of gravity that we all feel is referred to as “one G”. As gravity is a actually an accelerating force, acceleration is measured relative to that force of gravity. So, if we are sitting in a vehicle that accelerates at 3G, then we are experiencing a force that is three times that which we feel from the gravitational pull of the earth.

48. Guitar device producing a vibrato effect : WHAMMY BAR
You know that “lever” that electric guitar players “wiggle” to produce a vibrating sound? Well, it’s called a “whammy bar”. Movement of the bar changes the tension of the strings, resulting in a change of pitch that the player can use to create a number of different effects.

57. Roast setting : DAIS
Ultimately our word “dais” comes from the Latin “discus” meaning a “disk-shaped object”. I guess that many a dias was disc-shaped …

60. Orkney Islands clan : PICTS
The Picts were a Celtic people who lived in ancient Scotland, in the east and north of the country. The Picts gradually disappeared as an identifiable group, merging with the Gaels in the 10th century.

62. Needlework? : TATTOO ART
The word “tattoo” was first used in English in the writings of the famous English explorer Captain Cook. In his descriptions of the indelible marks adorning the skin of Polynesian natives, Cook anglicized the Tahitian word “tatau” into our “tattoo”.

64. Dioxane, e.g. : ETHER
Dioxane is an ether that is used primarily as a solvent.

65. Measure of progress : STATUS BAR
I usually think of a status bar as an area at the bottom of a computer screen giving some information about a program that is running. I think the reference here though is to the bar that appears when say a program is being installed, the bar that gradually “moves to the right” as the installation proceeds. I have always called that a “progress bar” …

66. Hyundai model : AZERA
The Hyundai Azera was the name used worldwide for the model known as the Hyundai Grandeur in its homeland of South Korea. The Azera was produced from 1986 to 1992.

Down
1. Governmental stimulus of 2012 : JOBS ACT
The JOBS Act is more fully named the Jumpstart Our Business Startups Act. The goal of the JOBS Act is to make it easier to fund small businesses by easing some securities regulations. I think that what’s most remarkable about the JOBS Act is that it is a bipartisan piece of legislation!

2. Missive : EPISTLE
By definition, an epistle is a writing sent by one person to a group of people, with the name “epistle” coming from the Greek word for “a letter”. The 21 epistles of the New Testament are letters from various of the Apostles to groups of Christians, with most of them being written by Paul.

3. Kind of acid that dissolves gold : SELENIC
Selenic acid is a compound that includes the element selenium. Selenic acid is capable of dissolving gold, provided the acid is concentrated and hot.

4. It might be a link : URL
Internet addresses (like NYTCrossword.com and LAXCrossword.com) are more correctly called Uniform Resource Locators (URLs).

5. Auto with a “9” in almost all its model names : SAAB
SAAB stands for Svenska Aeroplan AB, which translates into English as Swedish Aeroplane Limited. SAAB was, and still is, mainly an aircraft manufacturer. If you take small hops in Europe you might find yourself on a SAAB passenger plane. The SAAB automobile division was acquired by General Motors in the year 2000, who then sold it to a Dutch concern in 2010. However, SAAB (automotive) finally went bankrupt in 2011.

6. Onetime spokesmodel for I Can’t Believe It’s Not Butter : FABIO
Fabio Lanzoni (usually called just “Fabio”) is an Italian fashion model and all-round celebrity. Fabio’s real claim to fame was his appearance on the cover of many, many romance novels in the eighties and nineties.

Carleton College in Northfield, Minnesota is named for a brassware manufacturer from Charlestown, Massachusetts. William Carleton made a large donation in 1871 to what was then called Northfield College. William was moved to make the endowment on hearing of the miraculous recovery of Northfield’s president James Strong after his carriage was hit by a train.

12. Mediterraneo tourist locale : SICILIA
Sicily is the largest island in the Mediterranean Sea, the “ball” that is being kicked by the Italian “boot”.

13. Hyundai model : ELANTRA
The Elantra is a compact car made by Hyundai of South Korea.

14. Fizz : SELTZER
The name “seltzer” comes from the village of Selters in Germany. Selters has natural springs of carbonated mineral water that is bottled and sold as Selters water. In English-speaking countries the name has morphed into “Seltzer” water.

Checkers is yet another word that I had to learn moving across the Atlantic. In Ireland the game is called draughts.

36. “Place without water,” in Mongolian : GOBI
The large desert in Asia called the Gobi lies in northern China and southern Mongolia. The Gobi desert is growing at an alarming rate, particularly towards the south. This “desertification” is caused by increased human activity. The Chinese government is trying to halt the desert’s progress by planting great swaths of new forest, the so called “Green Wall of China”.

The Côte d’Azur is on the Mediterranean coast of France and stretches from Saint Tropez in the west and to the Italian border in the east. In English we often refer to the area as the French Riviera. It’s a little crowded for me (okay … expensive!), especially in the summer.

39. Comics character named for a flower : SWEE’PEA
Originally Popeye used the nickname “swee’pea” to address his girlfriend Olive Oyl. Then along comes a baby, found on Popeye’s doorstep. Popeye adopts the little guy and raises him, calling him “Swee’Pea”.

40. High-end accommodations, familiarly : THE RITZ
César Ritz was a Swiss hotelier, who had a reputation for developing the most luxurious of accommodations and attracting the wealthiest clientèle. He opened the Hotel Ritz in Paris in 1898 and the second of his most famous hotels, the Ritz Hotel in London, in 1906. Ritz was lucky in his career, as before starting his own hotel chain, he had been dismissed from the Savoy Hotel in London, implicated in the disappearance of a substantial amount of wine and spirits.

45. Opening words deliverer : ALI BABA
There is some controversy about the story “Ali Baba and the Forty Thieves” in that it has been suggested it was not part of the original collection of Arabic tales called “One Thousand and One Nights”. The suggestion is that the Ali Baba tale was added by one of its European translators.

47. Period of radio silence : RE-ENTRY
When a spacecraft re-enters the earth’s atmosphere, it compresses the air in front of it creating a tremendous amount of heat. This heated air ionizes and surrounds the vehicle. The ionized air interferes with radio signals leading to the famous spacecraft re-entry communications blackout. This blackout lasted for about 3 minutes for each of the Apollo missions. Famously, the miraculous Apollo 13 spacecraft entered the atmosphere at a much shallower angle than was routine, and the resulting blackout lasted for a nail-biting 6 minutes.

50. Some western gear : REATAS
A riata (also “reata”) is a lariat or a lasso. “Reata” is the Spanish word for lasso.

62. Japanese market inits. : TSE
The Tokyo Stock Exchange (TSE) is the third largest stock exchange in the world, after New York and London.