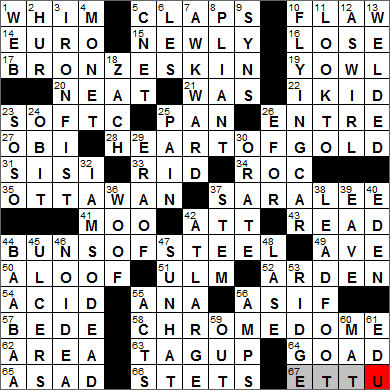 Today’s Wiki-est, Amazonian Googlies
Across
14. Multinational coin : EURO
The European Union (EU) today stands at a membership of 27 states. The Euro is the official currency of only 16 of the 27. The list of states in the EU that don’t use the Euro includes the UK, Denmark, Sweden and Norway.

There was an old woman who lived in a shoe.
She had so many children, she didn’t know what to do;
She gave them some broth without any bread;
Then whipped them all soundly and put them to bed.

25. Pipe-playing god : PAN
In Greek mythology, Pan was a lecherous god, one who fell in love with Echo the mountain nymph. Echo refused Pan’s advances so that he became very angry. Pan’s anger created a “panic” (a word derived from the name “Pan”) and a group of shepherds were driven to kill Echo.

27. Kimono sash : OBI
The sash worn as part of traditional Japanese dress is known as an obi. The obi can be tied in what is called a butterfly knot.

31. “Oui, oui,” across the Pyrenees : SI SI
According to Greek mythology, Pyrene was a lover of Hercules. Out of the relationship she bore a serpent, which understandably terrified her so she fled into the woods and there died. Hercules made a tomb for her that he covered with a huge pile of rocks, creating the Pyrenees mountain range that separates Spain from France. So, Pyrenees is named after Pyrene.

34. Mythical bird of prey : ROC
The mythical roc is a huge bird of prey, reputedly able to carry off and eat elephants.

35. Citizen of Canada’s capital : OTTAWAN
Ottawa is the second largest city in the Province of Ontario (after Toronto) and is the capital city of Canada. The name “Ottawa” comes from an Algonquin word “adawe” which means “to trade”.

37. Nobody doesn’t like her, in a slogan : SARA LEE
In 1935, businessman Charles Lubin bought a chain of three bakeries in Chicago called Community Bake Shops, and soon expanded the operation into seven stores. Lubin introduced a cream cheesecake that he named after his daughter who was only 8-years-old at the time, Sara Lee Lubin. The cheesecake was a hit and he renamed the bakeries to Kitchen of Sara Lee. The business was bought out by Consolidated foods in 1956, but the brand name Sara Lee persists to this day, as does Ms. Sara Lee herself who now goes by the name Sara Lee Schupf.

43. Use a Kindle, say : READ
The Kindle Fire is a tablet computer version of the highly successful Kindle e-book reader. If you’re looking for a tablet computer at a very reasonable price, then the Fire is hard to pass up. Amazon’s strategy is to sell the Fire at little or no profit, with the intent of selling more Amazon products, mainly digital content.

49. “___ Maria” : AVE
“Ave Maria”, or “Hail Mary” in English, is the prayer at the core of the Roman Catholic Rosary, which itself is a set of prayers asking for the assistance of the Virgin Mary. Much of the text of the “Hail Mary” comes from the Gospel of Luke.

51. German city where Einstein was born : ULM
Ulm is in the south of Germany and sits on the River Danube. Ulm is famous as home to the tallest church in the world, Ulm Minster, a Gothic building with a steeple that is 530ft tall, with 768 steps to climb. Ulm is also the birthplace of Albert Einstein, and is where the entire Austrian army surrendered to Napoleon after the Battle of Ulm in 1805.

52. Elizabeth of cosmetics : ARDEN
Elizabeth Arden was the business name used by Canadian-American Florence Nightingale Graham. Arden built a cosmetics empire that made her one of the wealthiest women in the world.

55. Santa ___ winds : ANA
Santa Ana is the county seat of Orange County, California and takes its name from the Santa Ana River that runs through the city. The Santa Ana winds are the very dry air currents that sweep offshore late in the year in Southern California. Because these air currents are so dry, they are noted for their influence over forest fires in the area, especially in the heat of the fall. The winds arise from a buildup of air pressure in the Great Basin that lies between the Rocky Mountains and the Sierra Nevada. Under the right conditions, that air spills over the peaks of the Sierra Nevada and basically “falls” down the side of the Sierra range, heading for the ocean. As the air falls it becomes drier and heats up so that relative humidity can fall to below 10% by the time it hits the coast.

57. “Venerable” English historian : BEDE
The Venerable Bede was a monk in the north of England in the first century AD. Bede is mainly known as an author and scholar, and publisher of “The Ecclesiastical History of the English People”.

58. Baldie’s nickname : CHROME DOME
“Chrome” is the name given to a metallic coating of chromium metal that is applied to an object by electroplating.

66. Deletion undoers : STETS
“Stet” is the Latin word meaning “let it stand”. In editorial work, the typesetter is instructed to disregard any change previously marked by writing the word “stet” and then underscoring that change with a line of dots or dashes.

67. Caesar’s words to Brutus : ET TU
It was Shakespeare who popularized the words “Et tu, Brute?” (And you, Brutus?), in his play “Julius Caesar”, although the phrase had been around long before he penned his drama. It’s not known what Julius Caesar actually said in real life just before he was assassinated on the steps of the Senate in Rome.

Down
2. “Ben-___” : HUR
The celebrated Charlton Heston movie “Ben-Hur” is a dramatization of a book published in 1880 by Lew Wallace titled “Ben-Hur: A Tale of Christ”. The 1959 epic film won a record 11 Academy Awards, a feat that has been equaled since then but has never been beaten. The other winners of 11 Oscars are “Titanic” and “The Lord of the Rings: The Return of the Rings”.

4. Impressionist Claude : MONET
Claude Monet painted the harbor of Le Havre in the north of France in 1872, giving it the title “Impression, Sunrise”. The painting is not a “realistic” representation of the scene in front of him, hence the name “impression”. It was this very painting that gave rise to the name of the Impressionist movement.

5. Tech news site : C|NET
c|net is an excellent technology website. c|net started out in 1994 as a television network specializing in technology news. In fact the host of “American Idol”, Ryan Seacrest, started off his career as a host on a c|net show.

6. “Au Revoir ___ Enfants” : LES
“Au revoir, les enfants” (“Goodbye, Children”) is a French film released in 1987. The film is based on real events from the childhood of director Louis Malle who witnessed a Gestapo raid on his school. During the raid, three Jewish students and a Jewish teacher were taken and transported to Auschwitz, where they were gassed upon arrival.

24. Black-bordered news item : OBIT
“Obituary” comes from the Latin “obituaris”, originally the record of the death of a person, although the literal meaning is “pertaining to death”.

29. ___ Good Feelings : ERA OF
The Era of Good Feelings lasted from about 1816 to 1824, during the administration of President James Monroe. The term described the feeling of bipartisanship that permeated politics at that time, largely due to President Monroe deliberately downplaying differences between the parties in Washington. One can only dream …

36. Great Dane sound : WOOF
The Great Dane breed of dog is one of the tallest. The “record” for the world’s tallest living dog is usually held by a Great Dane.

40. Garden of ___ : EDEN
According to the Book of Genesis, Adam and Eve lived in a garden “in” Eden, with Eden being geographically located by reference to four rivers including the Tigris and the Euphrates. Some scholars hypothesize that Eden was located in Mesopotamia, which encompasses much of modern-day Iraq.

45. Worriers’ problems, it’s said : ULCERS
A peptic ulcer, until fairly recently, was believed to be caused by undue amounts of stress in one’s life. It is now known that 70-90% of all peptic ulcers are in fact associated with a particular bacterium.

53. Klingon forehead feature : RIDGE
Klingons are a warrior race often featured in the “Star Trek” franchise of shows. Back in the first “Star Trek” movie, the actor James Doohan (who played “Scottie”) put together some Klingon dialogue that was used in the film. For subsequent movies, the American linguist Marc Okrand was commissioned to develop a working Klingon language, which he duly did using the original words from Doohan as its basis.

56. Sound boxes at a concert : AMPS
An electric guitar, for example, needs an amplifier to take the weak signal created by the vibration of the strings and turn it into a signal powerful enough for a loudspeaker.

61. End of a school e-mail address : EDU
A domain name is basically the address of a website on the Internet. Some time ago, I moved the website for this blog to a new address (from puzzle.paxient.com to NYTCrossword.com). Like in the real world, one pays for an address. I now own (well rent!) both of the addresses used for this blog, but choose to “do business”, publish the blog, at the more memorable address: NYTCrossword.com. It’s sort of like preferring to have a Park Avenue address instead of one on say Elm Street. In the Internet world, elements of the domain name are intended to indicate what type of activity goes on at a particular address. So an address with “.com” implies a “company” website, a “.org” implies a non-profit website and “.edu” implies an education website. But in reality anyone can rent whatever address they want, as it just goes to the highest bidder. Most folks remember “.com” addresses, so they are the most popular. “.com” is meant to imply a “business address” as I say, but it can even be used for somewhere to chat about crosswords!