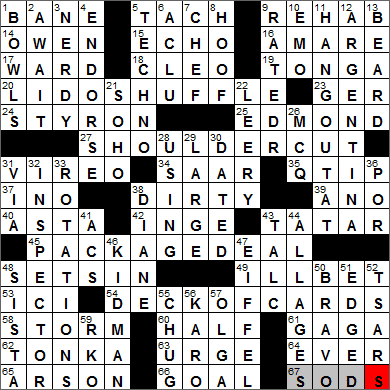 CROSSWORD SETTER: Allan E. Parrish
THEME: Some Card Action … each of today’s theme answers ends with a verb that might be applied to a deck of cards:

14. Writer Wister : OWEN
The novelist Owen Wister earned himself the nickname of “father” of western fiction. Wister was a friend of President Theodore Roosevelt and spent a lot time with the president out west. Wister’s most famous book is “The Virginian” which was published in 1902. “The Virginian” is regarded as the world’s first cowboy novel, and is dedicated to Theodore Roosevelt.

16. To love, in Milan : AMARE
Milan is Italy’s second largest city, second only to Rome. Milan is a European fashion capital, the headquarters for the big Italian fashion houses of Valentino, Gucci, Versace, Armani, Prada and others. Mario Prada was even born in Milan, and helped establish the city’s reputation in the world of fashion.

18. Laine of jazz fame : CLEO
Cleo Laine is a jazz singer from England who is noted for her remarkable range of nearly four octaves. Laine is the only female performer to have received Grammy nominations in each of the classical, jazz and popular music categories. My favorite of her recordings is “He Was Beautiful”, which is also known as “Cavatina” and is a version of the theme from the film “The Deer Hunter”.

19. South Pacific island nation : TONGA
The Kingdom of Tonga is made up of 176 islands in the South Pacific, 52 of which are inhabited and scattered over an area of 270,000 square miles.

24. “Sophie’s Choice” novelist : STYRON
“Sophie’s Choice” is a novel by William Styron. The title character is a Polish survivor of Nazi concentration camps. The tragic “choice” which Sophie had to make was forced on her by a sadistic German doctor during the war. Sophie had to decide which of her two young children would be immediately gassed, and which would be allowed to live in a camp.

25. Hoyle of “Hoyle’s Rules of Games” : EDMOND
Edmond Hoyle was a writer, most famous for documenting the rules and play of card games. In particular, Hoyle first wrote a book on the game of whist that was very popular. Such was the success of Hoyle’s treatises that we use the phrase “according to Hoyle” to mean “according to some respected authority”.

31. Bird with red-eyed and yellow-throated varieties : VIREO
Vireos are pretty little birds native to the New World. Vireos’ wings and bodies are mostly grey, but their head and throats are often a lovely olive green.

34. Coal-rich area in Europe : SAAR
The Saar is a river that rises on the border between Alsace and Lorraine in France, flows through western Germany and finally enters the Moselle. Historically the Saar river valley was an important source for coal, iron and steel.

35. Common cotton swab : Q-TIP
Cotton swabs were originally marketed under the name “Baby Gays”, but this was changed in 1926 to “Q-Tips”, with the Q standing for “quality”.

39. Year, in Yucatán : ANO
The Yucatán is one of Mexico’s 31 states and is located in the east of the country, on the northern tip of the Yucatán peninsula.

40. Film terrier played by Skippy : ASTA
Asta is the wonderful little dog in the superb movie “The Thin Man” starring William Powell and Myrna Loy (as Nick and Nora Charles). In the original story by Dashiell Hammett, Asta was a female Schnauzer, but on screen Asta was played by a wire-haired fox terrier called “Skippy”. Skippy was also the dog in “Bringing up Baby” with Cary Grant and Katharine Hepburn, the one who kept stealing the dinosaur bone. Skippy retired in 1939, so Asta was played by other dogs in the remainder of “The Thin Man” films.

42. “Picnic” playwright : INGE
Playwright William Inge had a run of success on Broadway in the early fifties. Inge’s most celebrated work of that time was the play “Picnic”, for which he was awarded a Pulitzer Prize. The original 1953 cast of “Picnic” included a young male actor making his debut on Broadway, and his name was Paul Newman.

43. Volga River native : TATAR
Tatars are an ethnic group of people, mainly residing in Russia (a population of about 5 1/2 million). Actor Charles Bronson had a Tatar heritage. Bronson’s real name was Charles Buchinsky.

The Volga is the longest river in Europe, and is considered the national river of Russia.

62. Toy truck maker : TONKA
The toy manufacturer today known as Tonka started out as a manufacturer of garden implements in Mound, Minnesota in 1946. By 1955, toys had become the main line for the company. At that time the owners decided to change the company name and opted for “Tonka”, a Dakota Sioux word meaning “great, big”.

66. Result of a successful slap shot : GOAL
A slapshot in ice hockey involves slapping the ice just behind the puck with the stick, causing the stick to bend and store up extra energy. When the stick finally hits the puck, all that extra energy is released along with the energy from the swing resulting in the hardest shot in hockey.

Down
1. Big New Year’s Day events : BOWLS
The Rose Bowl is the oldest of all the bowl games and so has the nickname “The Granddaddy of the Them All”. The first Rose Bowl game was played in 1902.

5. Dance music genre : TECHNO
Techno is a type of electronic dance music that originated in Detroit in the eighties. Techno involves a heavy beat in common time, and what seems to be a lot of repetition. Not for me …

6. Rights org. since 1920 : ACLU
The American Civil Liberties Union (ACLU) has its roots in the First World War when it was founded to provide legal advice and support to conscientious objectors.

9. Like “The Exorcist” and “Lethal Weapon” : RATED R
The Motion Picture Association of America’s (MPAA) film-rating system (R, PG-17, G etc.) is purely voluntary and is not backed by any law. Movie theaters agree to abide by the rules that come with the MPAA ratings in exchange for access to new movies.

10. Nondance music genre : EMO
The musical genre of “emo” originated in Washington D.C. in the 80s, and takes its name from “emotional hardcore”. Not my cup of tea …

12. One side in the Falklands War : ARGENTINA
The Falkland Islands are in the South Atlantic Ocean, about 300 miles off the coast of Argentina. The Falklands have been claimed as an overseas territory by various European nations, with the British having the most persistent claim from the northern hemisphere. Understandably perhaps, nearby Argentina has claimed ownership of the islands for centuries. The dispute between Britain and Argentina came to a head in 1982 when Argentine forces invaded the Falklands. It took weeks for a British expeditionary force to arrive in the area, but they emerged victorious after some explosive air and naval battles that resulted in the death of 255 British and 649 Argentine military personnel.

13. Vandyke, e.g. : BEARD
The style of facial hair known as a Van Dyke is made up of a moustache and a goatee, with the cheeks fully shaven. The style takes its name from the 17th century Flemish painter Anthony van Dyck who wore such a beard, as did many of the men whose portrait he painted.

21. Manhattan district with art galleries : SOHO
The Manhattan neighborhood known today as SoHo was very fashionable in the early 1900s, but as the well-heeled started to move uptown the area became very run down and poorly maintained. Noted for the number of fires that erupted in derelict buildings, SoHo earned the nickname “Hell’s Hundred Acres”. The area was then zoned for manufacturing and became home to many sweatshops. In the mid-1900s artists started to move into open loft spaces and renovating old buildings as the lofts were ideal locations in which an artist could both live and work. In 1968, artists and others organized themselves so that they could legalize their residential use of an area zoned for manufacturing. The group they formed took its name from the name given to the area by the city’s Planning Commission i.e “South of Houston”. This was shortened from So-uth of Ho-uston to SoHo as in the SoHo Artists Association, and the name stuck.

26. 1974 John Wayne crime drama : MCQ
“McQ” is a 1974 crime thriller set in Seattle, Washington. “McQ” was somewhat of a consolation prize for the star John Wayne, as a few years earlier he was passed over for the title role in “Dirty Harry”. That role of course went to Clint Eastwood.

32. Lestrade of Sherlock Holmes stories, e.g. : INSPECTOR
Inspector Lestrade is a fictional policeman from Scotland Yard who appears in many of the “Sherlock Holmes” stories written by Sir Arthur Conan Doyle. Doyle pinched the name “Lestrade” from a friend of his who he knew in his university days, a medical student called Joseph Alexandre Lestrade.

38. Photographer Arbus : DIANE
Diane Arbus was photographer famous for producing black & white images of the unusual and less than savory aspects of life. The 2006 movie “Fur” presents a fictionalized account of her life and work, with Nicole Kidman playing Arbus.

46. Best Actress winner for “The Hours” : KIDMAN
Nicole Kidman is an Australian-American actress whose breakthrough role was the female lead in 1989’s “Dead Calm”. Kidman was actually born in Hawaii to Australian parents. As a result, she has dual citizenship of Australia and the US.

47. ___ Tower : EIFFEL
The Exposition Universelle (World’s Fair) of 1900 was held in Paris, France. The 1900 fair is remembered for the magnificent entrance arch that was constructed for visitors. That entrance arch was to remain standing for only nine years, but the city decided to keep it and you can visit it today. Today we call that entrance arch the Eiffel Tower.

52. Bygone Russian leaders : TSARS
The term czar (also tsar) is a Slavic word that was first used as a title by Simeon I of Bulgaria in 913 AD. “Czar” is derived from the word “Caesar”, which was synonymous with “emperor” at that time.

57. Gymnast Korbut : OLGA
Olga Korbut is from modern-day Belarus, but was born during the days of the Soviet Union. Korbut competed for the USSR team in the 1972 and 1976 Olympic Games. She was 17 when she appeared in the 1972 Munich Games, and had been training in a sports school since she was 8-years-old. The world fell in love with her as she was a very emotional young lady, readily expressing joy and disappointment, something that we weren’t used to seeing in athletes from behind the Iron Curtain. Korbut immigrated to the US in 1991 and now lives in Scottsdale, Arizona.

“King Kong” really is a classic movie. It stars Fay Wray as the young woman (Ann Darrow) with whom Kong falls in love. Wray was very interested in the role as she was told that she would be playing opposite the “tallest, darkest leading man in Hollywood”. She thought it might be Clark Gable. At least that’s how the story goes …