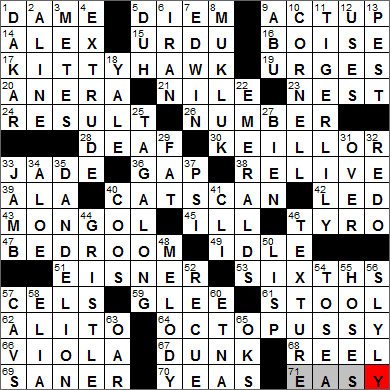 CROSSWORD SETTER: Elizabeth A. Long
THEME: Meow … we have five themed answers today, each of which includes a feline reference:

Today’s Wiki-est, Amazonian Googlies
Across
1. “There Is Nothin’ Like a ___” (“South Pacific” song) : DAME
The 1949 Rodgers and Hammerstein musical “South Pacific” is based on stories from the 1947 book “Tales of the South Pacific” by James A. Michener. “South Pacific” really is a classic show featuring some classic songs, like “Bali Ha’i”, “I’m Gonna Wash That Man Right Outta My Hair”, “Some Enchanted Evening” and “Happy Talk”.

14. “Jeopardy!” host Trebek : ALEX
“Jeopardy” first went on the air in 1964, and is another successful Merv Griffin creation. But it took the introduction of Alex Trebek as host in order to bring the show into the big times. Trebek has been host since 1984.

15. Pakistani tongue : URDU
Urdu is one of the two official languages of Pakistan (the other being English), and is one of 22 scheduled languages in India. Urdu partly developed from Persian and is written from right to left.

16. Idaho’s capital : BOISE
Boise, Idaho is the largest metropolitan area in the state by far. There are a number of stories pertaining to the etymology of the name “Boise”. One is that French trappers named the tree-lined river that ran through the area “la rivière boisée”, meaning “the wooded river”.

21. River near the Pyramids : NILE
Depending on definition, the Nile is generally regarded as the longest river on the planet. The Nile forms from two major tributaries, the White Nile and the Blue Nile, which join together near Khartoum, the capital of Sudan. From Khartoum the Nile flows north, traveling almost entirely through desert making it central to life for the peoples living along its length.

28. Needing sign language, say : DEAF
It’s really quite unfortunate that American Sign Language (ASL) and British Sign Language (BSL) are very different, and someone who has learned to sign in one cannot understand someone signing in the other.

33. Green gem : JADE
Jade is actually the name given to two different mineral rocks, both of which are used to make gemstones. The first is nephrite, a mineral with a varying degree of iron content, the more iron the greener the color. The second is jadeite, a sodium and aluminum-rich pyroxene. As well as being used for gemstones, both jade minerals can be carved into decorative pieces.

36. Cumberland ___ : GAP
The Cumberland Gap is a pass in the Appalachian Mountains, lying at the point where the three states of Tennessee, Kentucky and Virginia meet. The pass was long used by Native Americans, before being discovered by explorer Thomas Walker in 1750. The path through the gap was widened by a team of loggers in 1775, and leading the work party was the American pioneer Daniel Boone.

39. Chicken ___ king : A LA
Chicken à la King is a dish made with diced chicken in a cream sauce served over rice or pasta. There are several claims about the origin of the dish, but the most credible (to me) is that it was created in the 1890s in the Bellevue Hotel in Philadelphia by the hotel’s chef William King.

40. Hospital diagnostic : CAT SCAN
A CT (or “CAT”) scan produces (via computer manipulation) a three dimensional image of the inside of an object, usually the human body. It does so by taking a series of two dimensional x-ray images while rotating the camera around the patient. The issue with CT scans is that they use x-rays, and high doses of radiation can be harmful causing damage that is cumulative over time. An MRI on the other hand (Magnetic Resonance Imaging), uses powerful magnetic fields to generate its images so there is no exposure to ionizing radiation (such as X-rays). We used MRI equipment in our chemistry labs at school, way back in the days when the technology was still called Nuclear Magnetic Resonance Imaging (NMRI). Apparently the marketing folks didn’t like the term “nuclear” because of its association with atomic bombs, so now it’s just called MRI.

43. Genghis Khan, for one : MONGOL
Genghis Khan was the founder of the Mongol Empire, destined to be the largest contiguous empire in the history of the world. He initially built his empire by uniting nomadic tribes of northeast Asia, but once Genghis Khan had consolidated his position he initiated Mongol invasions throughout Eurasia. At it’s height, the Mongol Empire stretched from the River Danube to the Sea of Japan.

46. Beginner : TYRO
A tyro (also tiro) is a beginner or a novice. “Tyro” comes into English from Latin, in which “tiro” means “a recruit”.

51. Former Disney head Michael : EISNER
Michael Eisner took over as CEO of the Walt Disney Company in 1984. Eisner has been attributed with turning Disney around, as the company was floundering really since 1966 when Walt Disney died. Eisner had a good run, but ran foul of Walt Disney’s nephew Roy Disney who led a revolt that resulted in Eisner’s resignation in 2005.

53. Wedge fractions in Trivial Pursuit : SIXTHS
Trivial Pursuit was invented in 1979 by two Canadians from Montreal. The pair decided to come up with their own game after they discovered that there were pieces missing from the game of Scrabble that they wanted to play. There was a full blown launch of a commercial version of the game in 1982. In 2008, Hasbro bought the complete rights to Trivial Pursuit, for US$80 million!

57. Cartoon frames : CELS
In the world of animation, a cel is a transparent sheet on which objects and characters are drawn. In the first half of the 20th century the sheet was actually made of celluloid, giving the “cel” its name.

59. ___ club (singing group) : GLEE
A glee club is a choir group, usually of males, that sings short songs known as “glees”. A glee is a song scored for three or more voices that is performed unaccompanied.

62. Samuel on the Supreme Court : ALITO
Associate Justice Samuel Alito was nominated to the US Supreme Court by President George W. Bush. Alito is the second Italian-American to serve on the Supreme Court (Antonin Scalia was the first). Alito studied law at Yale and while in his final year he left the country for the first time in his life, heading to Italy to work on his thesis about the Italian legal system.

64. James Bond film involving a Fabergé egg : OCTOPUSSY
The title for the 13th James Bond film “Octopussy” actually came from an original story by the creator of James Bond, Ian Fleming. However, the movie bears no resemblance to Fleming’s 1966 short story “Octopussy and the Living Daylights”. “Octopussy” was one of the Roger Moore Bond movies, his second to last.

Down
1. Senegal’s capital : DAKAR
The Republic of Senegal is a country on the far western coast of Africa. For many years Senegal was a French colony, gaining independence in 1960. The capital of Senegal is Dakar, a city located on the Cap-Vert Peninsula that juts out into the Atlantic Ocean.

6. It’s bordered by three countries with “-stan” in their names : IRAN
The countries of Turkmenistan, Afghanistan and Pakistan lie along Iran’s north and eastern borders.

7. Dickens’s “The Mystery of ___ Drood” : EDWIN
“The Mystery of Edwin Drood” is an unfinished novel by Charles Dickens. The story itself is centered not on the title character, but on Edwin Drood’s uncle, a choirmaster named John Jasper.

8. Eskimo boot : MUKLUK
Mukluks are soft boots worn by Arctic peoples such as the Inuit and Yupik. The boots are made from reindeer skin or sealskin. The term “mukluk” come from the Yupik “maklak”, the word for “bearded seal”.

9. ___ Dhabi : ABU
Abu Dhabi is one of the seven Emirates that make up the federation known as the United Arab Emirates (UAE). The two largest members of the UAE (geographically) are Dubai and Abu Dhabi, the only two of the seven members that have veto power over UAE policy. Before 1971, the UAE was a British Protectorate, a collection of sheikdoms. The sheikdoms entered into a maritime truce with Britain in 1835, after which they became known as the Trucial States, derived from the word “truce”.

10. Institution in Ithaca, N.Y. : CORNELL
Ezra Cornell was an associate of Samuel Morse and made his money in the telegraph business. After Ezra retired he co-founded Cornell University in Ithaca, New York. He provided a generous endowment and donated his farm as a site for the school, and was then rewarded by having the institute named after him.

18. School where the Clintons met : YALE
President Bill Clinton was born not as a Clinton, but as William Jefferson Blythe. His father was killed in a car accident just three months before he was born. His mother remarried a few years later, to Roger Clinton. Bill didn’t formally adopt the Clinton name until he was fourteen years old, although he used it as he was growing up.

When Hillary Rodham Clinton was appointed US Secretary of State, she became the first former First Lady to serve in a president’s cabinet. Hillary met her husband, President Bill Clinton, when the two were studying at Yale law school.

33. Either side of a doorway : JAMB
A door jamb is the vertical portion of a door frame. The term “jamb” comes from the French word “jambe” meaning “leg”.

34. ___ vera : ALOE
Aloe vera has a number of alternate names that are descriptive of its efficacy as a medicine. These include the First Aid plant, Wand of Heaven, Silent Healer and Miracle Plant.

35. Source of some fluff : DANDELION
The name “dandelion” comes from the French “dent de lion” meaning “lion’s tooth”. The name is a reference to the coarse, tooth-like edges of a dandelion’s leaves.

37. Omega preceder : PSI
The Greek letter psi is the one that looks a bit like a trident or a pitchfork.

57. Cleveland b-ball team : CAVS
The Cleveland Cavaliers are the professional basketball team based in Cleveland, Ohio. The Cavs joined the NBA as an expansion team in 1970.

58. Kazan of Hollywood : ELIA
Elia Kazan won Oscars for best director in 1948 for “Gentleman’s Agreement” and in 1955 for “On The Waterfront”. In 1999 Kazan was given an Academy Lifetime Achievement Award. He also directed “East of Eden”, which introduced James Dean to movie audiences, and “Splendor in the Grass”, which included Warren Beatty in his debut role.

60. Sicilian mount : ETNA
Mt. Etna is the largest of three active volcanoes in Italy. Mt Etna is about 2 1/2 times the height of its equally famous sister, Mt. Vesuvius.