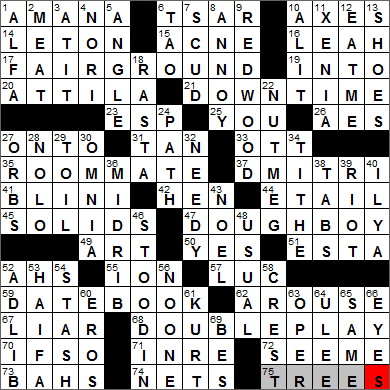 CROSSWORD SETTER: Adam G. Perl
THEME: Double Play … each of the theme answers is composed of two words, each of which can follow the word “play”:

Today’s Wiki-est, Amazonian Googlies
Across
1. Washer/dryer brand : AMANA
The Amana Corporation takes its name from the location of its original headquarters, in Middle Amana, Iowa.

6. Bygone despot : TSAR
The term czar (also tsar) is a Slavic word that was first used as a title by Simeon I of Bulgaria in 913 AD. “Czar” is derived from the word “Caesar”, which was synonymous with “emperor” at that time.

17. Place to see a Ferris wheel : FAIRGROUND (play fair & playground)
The first Ferris Wheel was built for the Chicago World’s Fair in 1893. That wheel was designed and constructed by George Washington Gale Ferris, Jr. who lent his name to wheels built from then on.

20. Fifth-century invader : ATTILA
In his day, Attila the Hun was the most feared enemy of the Roman Empire, until he died in 453AD. Attila was the leader of the Hunnic Empire of central Europe and was famous for invading much of the continent. However he never directly attacked Rome.

26. 1950s runner’s inits. : AES
Adlai Stevenson ran for president unsuccessfully against Dwight D. Eisenhower in 1952 and in 1956. Some years after his second defeat, Stevenson served under President Kennedy as Ambassador to the United Nations. Stevenson was always noted for his eloquence and he had a famous exchange in a UN Security Council meeting during the Cuban missile crisis. Stevenson bluntly demanded that the Soviet representative on the council tell the world if the USSR was installing nuclear weapons in Cuba. His words were “Don’t wait for the translation, answer ‘yes’ or ‘no’!” followed by “I am prepared to wait for my answer until Hell freezes over!”

37. Composer Shostakovich : DMITRI
Dmitri Shostakovich was a Russian composer, producing works in the Soviet period. He had a difficult relationship with the Communist Party and twice was officially denounced by the party.

41. Some pancakes : BLINI
A blintz (also “blin”, plural “blini”) is a thin pancake similar to a crêpe, although unlike a crêpe a blintz may contain yeast.

45. Pool choice : SOLIDS
The more correct name for the game of pool is pocket billiards. The name “pool” came after pocket billiards became a common feature in “pool halls”, places where gamblers “pooled” their money to bet on horse races.

47. W.W. I soldier : DOUGHBOY (playdough & playboy)
The American soldiers that headed overseas during WWI wear often known as “doughboys”. The term had been used as early as the 1840s and persisted till WWII, when it was quickly replaced by “GI”. There are a number of theories about the origins of “doughboy”, but the exact etymology isn’t too clear.

I think ”playdough” is used now as a generic term, derived from the brand name Play-Doh.

Back in the 1930s, a manufacturer in Cincinnati produced a doughy compound that was used to clean wallpaper. Twenty years later, school-kids started using the cleaning material as a modelling compound, so the manufacturer reworked the formula, and sold it to local schools. It was given the name Play-Doh.

55. Electrolysis particle : ION
Electrolysis is a chemical process that uses direct current passing through a solution to separate out individual chemicals in that solution. One chemical moves to the anode, and the other to the cathode.

73. Curmudgeonly cries : BAHS
Curmudgeon is one of my wife’s favorite terms to describe me. A curmudgeon is a bad-tempered person full of resentment and stubborn notions. I am sure she means it very affectionately …

75. Classic poem that begins “I think that I shall never see” : TREES
The American journalist and poet Joyce Kilmer is primarily known for his 1913 poem titled “Trees”. The original text of the poem is:

Down
1. ___ Romeo : ALFA
The “Alfa” in Alfa Romeo is actually an acronym, standing for Anonima Lombarda Fabbrica Automobili (“Lombard Automobile Factory, Public Company”), an enterprise founded in 1909. The company was taken over by Nicola Romeo in 1915, and in 1920 the company name was changed to Alfa Romeo.

6. “The ___ of Steve,” 2000 film : TAO
“The Tao of Steve” is a romantic comedy film released in 2000. The story is all about a guy who’s a bit of a slob but who is taught “the Tao of Steve” by friends, a remarkably effective system for seducing women.

7. Gulf war missile : SCUD
Scud missiles were developed by the Soviet Union during the Cold War. The Soviets called them R-11 missiles at first, with later versions known as R-17 and R-300 Elbrus. The name “Scud” was actually the name NATO used for the missile, a name created by Western intelligence officers. Ballistic missiles haven’t been used much in actual warfare, the exception being the German V-2 rocket attacks on England during WWII. After the V-2, the second most-used ballistic missile in warfare is the Scud, which featured in a number of conflicts:

9. ___ City, California locale named for local flora : REDWOOD
Redwood City is a city on the San Francisco Peninsula. It is a port city located right on San Francisco Bay. It’s also a city where I worked for several years a couple of decades ago …

11. City near Dayton : XENIA
Xenia, Ohio is in effect a suburb of Dayton. The name “Xenia” is the Greek word for “hospitality”.

12. Wonderland cake instruction : EAT ME
In Lewis Carroll’s “Alice’s Adventures in Wonderland”, Alice follows the white rabbit down a rabbit hole and finds a bottle labelled “DRINK ME”. When she drinks the contents, it causes her to shrink. She also sees a cake adorned with the words “EAT ME”, and when she eats the cake she grows so big she finds it hard to stand up. After eating the cake, she utters the famous words, “Curiouser and curiouser”.

13. Some brake parts : SHOES
The drum brake was invented in 1902 by Louis Renault (founder of Renault, the automobile company). In a drum brake, there is a set of brake shoes that usually presses on the inner surface of the drum to slow down rotation. Nowadays, the disc brake system is more popular, a design which uses brake pads instead of brake shoes.

18. Dreaded one? : RASTA
I must admit that I don’t really understand Rastafarianism. I do know that a “Rasta”, like Bob Marley, is a follower of the movement. Some say that Rastafarianism is a religion, some not. I also know that it involves the worship of Emperor Haile Selassie I of Ethiopia.

22. Tree that’s the source of mace : NUTMEG
The fruit of the nutmeg tree yields two very different spices. What we call “nutmeg” comes from the seed of the tree. “Mace” is the dried covering of the seed.

24. What 6-Down means : PATH
The Chinese character “tao” translates as “path”, but the concept of Tao signifies the true nature of the world.

28. Court plea, briefly : NOLO
“Nolo contendere” is a legal term that translates from Latin as “I do not wish to contend”. It’s the plea of “no contest” and is an alternative to “guilty” or “not guilty”, meaning that one doesn’t admit guilt but nor does one dispute the charge.

30. All, to Augustus : OMNIA
Gaius Octavius Thurinus (often called Octavian) was the adopted son of Gaius Julius Caesar. After Julius Caesar was assassinated, Octavian came to power in Rome and teamed up with Mark Antony and Marcus Aemilius Lepidus in what was called the Second Triumvirate. When the triumvirate fell apart, especially after Antony’s defeat at Actium, Octavian became more powerful within the Roman Republic. Several years later he wrested sufficient power from the Roman Senate to end the Republic and begin the Roman Empire. As the first Emperor of Rome, Octavian was given the name Caesar Augustus.

34. Church offering : TITHE
A tithe is traditional payment of one tenth of a person’s annual incomeand is usually given to a church. Tithing is a practice taught in many traditions and according to a 2002 survey, about 3% of American adults donate 10% or more of their income to a church.

36. What a leafstalk leads to : MIDRIB
The central vein in a leaf is known as the midrib.

40. The N.H.L.’s Kovalchuk : ILYA
Ilya Kovalchuk is a Russian-born hockey player for the New Jersey Devils of the National Hockey League.

43. “O Come, All Ye Faithful,” e.g. : NOEL
“Noël” is the French word for the Christmas season, ultimately coming from the Latin word for “birth” (natalis). Noel has come to be used as an alternative name for a Christmas carol.

The lovely hymn “Adeste Fideles” (aka “O Come, All Ye Faithful”) was written by one John Francis Wade in the 13th century. Well, he wrote the original four verses, with four more verses being added over time.

52. Wing it : AD LIB
“Ad libitum” is a Latin phrase meaning “at one’s pleasure”. In common usage the phrase is usually shortened to “ad lib”. On the stage the concept of an “ad lib” is very familiar. For example, an actor may substitute his or her own words for forgotten lines using an ad lib, or a director may instruct an actor to use his or her own words at a particular point in a performance to promote a sense of spontaneity.

53. Israeli port : HAIFA
Haifa is the third-largest city in Israel and the largest city in the north of the country. Haifa is built on the slopes of Mount Carmel, and is a Mediterranean seaport.

60. Winged Greek god : EROS
As always seems to be the case with Greek gods, Eros and Aphrodite have overlapping spheres of influence. Aphrodite was the goddess of love between a man and a woman, and Eros was the god who stirred the passions of the male.

61. Composer Weill : KURT
Kurt Weill was a German composer, noted for his work with Bertolt Brecht. The most famous work by Weill and Brecht is “The Threepenny Opera”, which includes the celebrated ballad “Mack the Knife”. Weill was Jewish and had to flee Nazi Germany and eventually settled in the US.

63. It can be found under TUV : OPER
The “operator” key is right under the 8-key on the keypad of a telephone.

64. Peter Fonda title role : ULEE
“Ulee’s Gold” is a highly respected film from 1997 in which Peter Fonda plays the title role of Ulee. Ulee’s “gold” is the honey that Ulee produces. It is a favorite role for Peter Fonda and he has shared that playing Ulee brought to mind his father, Henry Fonda, who himself kept a couple of hives. So if you see Peter Fonda in “Ulee’s Gold” you’re witnessing some characteristics that Peter saw in his father.