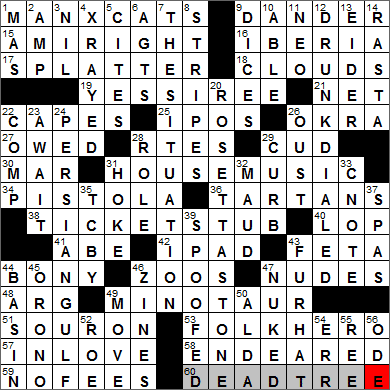 Today’s Wiki-est, Amazonian Googlies
Across
1. Pets named for their British Isles origin : MANX CATS
I’ve seen Manx cats by the dozen on their native island. They’re found all over the Isle of Man (hence the name “Manx”) located in the middle of the Irish Sea. Manx cats have no tails, they really don’t …

9. Anger : DANDER
The phrases “to get one’s Irish up” and “to get one’s dander up” mean to get riled up, to get angry. I guess we are always picking on the poor Irish!

21. Brooklyn player : NET
The NBA’s Brooklyn Nets until quite recently were the New Jersey Nets based in Newark. Prior to 1977, the team was known as the New York Nets and played in various locations on Long Island. Ten years earlier, the Nets were called the New Jersey Americans and were headquartered in Teaneck, New Jersey.

25. Wall St. Journal news subjects : IPOS
An Initial Public Offering (IPO) is the very first offer of stock for sale by a company on the open market. In other words, an IPO marks the first time that a company is traded on a public exchange. Companies have an IPO to raise capital to expand (usually).

28. A.A.A. courses : RTES
The American Automobile Association (AAA) is a not-for-profit organization focused on lobbying, provision of automobile servicing, and selling of automobile insurance. The AAA was founded in 1902 in Chicago, and published the first of its celebrated hotel guides back in 1917.

29. Something to chew on : CUD
Ruminants are animals that “chew the cud”. Ruminants eat vegetable matter but cannot extract any nutritional value from cellulose without the help of microbes in the gut. Ruminants collect roughage in the first part of the alimentary canal, allowing microbes to work on it. The partially digested material (the cud) is regurgitated into the mouth so that the ruminant can chew the food more completely exposing more surface area for microbes to do their work.

31. Some club tunes : HOUSE MUSIC
House music is a type of electronic dance music. The genre originated in Chicago in the eighties, and has now invaded the whole world. House music is characterized by a rhythmic thumping sound from drum machines and a simple 4/4 beat. It’s not the Beatles …

36. Some crisscross patterns : TARTANS
Tartan is sometimes called “plaid” over here in the US, a word not used in the same sense outside of this country. In Scotland a “plaid” is a blanket or a tartan cloth slung over the shoulder.

42. What you might do some light reading on? : IPAD
The very exciting iPad isn’t Apple’s first foray into the world of tablet computing. Apple created great buzz by introducing the Newton MessagePad way back in 1993. This innovative machine was fraught with problems and really died a very slow death, finally being withdrawn from the market in 1998.

43. ___ cheese : FETA
Feta is a Greek cheese made from sheep’s milk, or a mixture of sheep’s and goat’s milk. The cheese is salted and cured in a brine solution for several months before it is eaten.

47. Several Rodins : NUDES
The Rodin Museum is my favorite of all the museums in Paris. The Musée Rodin is very special in that the building and garden that hold all of the works was once Auguste Rodin’s actual home and studio. Well worth a visit if you’re in France’s City of Lights …

48. 1978 and 1986 World Cup winner: Abbr. : ARG
Argentina’s national soccer team has won the FIFA World Cup twice, in 1978 and 1986. Argentina and Brazil are the only South American teams to have won the World Cup when the tournament was played outside of their continent.

49. Fearsome figure in Greek myth : MINOTAUR
Minos was the King of Crete in Greek mythology, and the son of Zeus and Europa. Minos had an elaborate labyrinth built in Crete, designed by the architect Daedalus and his son Icarus (who famously died trying to escape from the island by “flying” away). In the labyrinth, King Minos kept the Minotaur, a dreadful creature with the head of a bull on the body of a man.

53. Johnny Appleseed, e.g. : FOLK HERO
Johnny Appleseed’s real name was John Chapman. By all accounts, Johnny was a remarkable man, someone who would have fitted right in with today’s culture as we become more environmentally conscious. He lived a minimalist lifestyle, going barefoot in summer to save on shoe leather. He was a vegetarian, and had great respect for all animal life, including insects.

59. Checking account offer : NO FEES
Checks and checking accounts caused me some language trouble when I first came to the US. Back in Ireland (and the UK) we write “cheques” using funds from our “current” accounts.

60. Print : DEAD TREE
The hard copy version of say a book is sometimes referred to the “dead tree” version.

4. Looked into? : X-RAYED
X-rays were first studied comprehensively by the German physicist Wilhelm Röntgen (also “Roentgen”), and it was he who gave the name “X-rays” to this particular type of radiation. Paradoxically, in Röntgen’s native language of German, X-rays are routinely referred to as “Röntgen rays”. In 1901 Röntgen won the first Nobel Prize in Physics that was ever awarded, recognition for his work on X-rays.

6. Bureau employees: Abbr. : AGTS
What we known today as the FBI was set up in 1908 as the BOI, the Bureau of Investigation. The name was changed to the Federal Bureau of Investigation in 1935. The Bureau was set up at the behest of President Theodore Roosevelt. President Roosevelt was largely moved to do so as there was a perception that anarchists were threatening law and order after the 1901 assassination of President McKinley.

7. “Jersey Shore” co-star : THE SITUATION
Michael Sorrentino is one of the cast members of the reality television show “Jersey Shore”. Sorrentino goes by the nickname “The Situation”. He was the second highest paid reality star in 2010, purportedly earning $5 million. Only Kim Kardashian earned more.

13. Feather source : EIDER
Eiders are large sea ducks. Their down feathers are used to fill pillows and quilts, giving the name to the quilt called an “eiderdown”.

14. Bob Marley, e.g. : RASTA
I must admit that I don’t really understand Rastafarianism. I do know that a “Rasta”, like Bob Marley, is a follower of the movement. Some say that Rastafarianism is a religion, some not. I also know that it involves the worship of Emperor Haile Selassie I of Ethiopia.

Bob Marley is the most widely known reggae performer, with big hits such as “I Shot the Sheriff”, “Woman, No Cry” and “One Love”. A little sadly perhaps, Marley’s best selling album was released three years after he died. That album would be the legendary (pun!) album called “Legend”.

20. Key discovery of 1799 : ROSETTA STONE
Rosetta is a coastal city and port on the Mediterranean coast of Egypt. The Rosetta Stone is an Ancient Egyptian artifact of tremendous importance in deciphering Egyptian hieroglyphics. Carvings on the stone are actually three translations of the same passage of prose, one in Egyptian hieroglyphics, one in Egyptian Demotic language, and one in classical Greek. The stone was discovered by the French military during Napoleon’s 1798 campaign in Egypt. Before the French could get it back to France, the stone somehow ended up in enemy hands (the British), so it is now on display in the British Museum. Ownership of the stone is very much in dispute. The French want it, and understandably, the Egyptians would like it back.

24. A lot of oil moves through it : PERSIAN GULF
The Persian Gulf is in effect an inland sea although it technically is an offshoot of the Indian Ocean. The outlet from the Persian Gulf to the Indian Ocean is one of the most famous maritime “choke points” in the world: the Strait of Hormuz. About 20% of the world’s supply of petroleum passes through the Strait of Hormuz.

“Bunkum” is the phonetic spelling of “Buncombe”, a county in North Carolina. Supposedly, a state representative made a dull and irrelevant speech that was directed to his home county of Buncombe, bringing the term “bunkum” into the language with the meaning of “nonsense”. The derivative word “debunk” first appeared in a novel by William Woodward in 1923, when he used it to describe “taking the bunk out of things”.

32. Tennyson title lady : MAUD
“Maud” is an 1855 poem by Alfred, Lord Tennyson. The first line of the poem is the source for a fairly well known song called “Come Into the Garden, Maud”. The first verse of the poem is:

35. Chain selling desserts : TCBY
TCBY is a chain of stores selling frozen yogurt, founded in 1981 in Little Rock, Arkansas. The acronym TCBY originally stood for “This Can’t Be Yogurt”, but this had to be changed due to a lawsuit being pressed by a competitor called “I Can’t Believe It’s Yogurt”. These days TCBY stands for “The Country’s Best Yogurt”.

37. Complimentary robe providers : SPAS
The word “spa” migrated into English from Belgium, as Spa is the name of a municipality in the east of the country that is famous for its healing hot springs. The name “spa” comes from the Walloon word “espa” meaning “spring, fountain”.

50. “Tower Heist” actor, 2011 : ALDA
Alan Alda had a great television career, especially of course on “M*A*S*H”. But when it comes to the big screen, my favorite of his movies is the 1978 romantic comedy “Same Time, Next Year” in which he starred opposite Ellen Burstyn.

“Tower Heist” is a 2011 comedy film that I had hoped to see when it was playing in theaters, but I missed it. It stars Ben Stiller as an employee of an apartment building who loses his pension due to fraudulent investing activities by a Wall Street businessman (played by Alan Alda). Stiller and his cohorts execute a heist to get back their money, and hilarity ensues (I am told).

55. Mr. ___ (Clue-like board game) : REE
The full name for the old mystery game is “Mr. Ree! The Fireside Detective”. It was first published in 1937 and frankly it sounds like a great game, even by today’s standards …