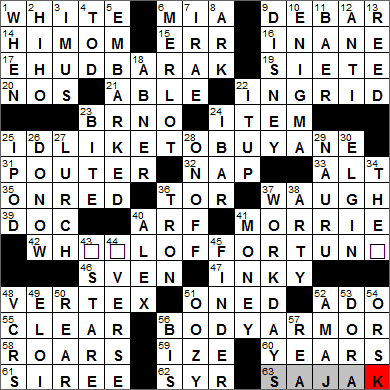 CROSSWORD SETTER: Kevan Choset
THEME: Vanna and Pat’s Puzzle … three of the squares in the grid are “blank” and the word “blank” completes the three down answers that include those squares. If you “buy an E” from Vanna WHITE and Pat SAJAK (who appear in the grid) then filling each of the blank squares with an E gives us an across answer of WHEEL OF FORTUNE:

Today’s Wiki-est, Amazonian Googlies
Across
1. One of a popular TV game show duo : WHITE
Vanna White is the lady who turns the letters on the “Wheel of Fortune” game show. White is big into knitting and crochet, and has her own line of yarns called “Vanna’s Choice”.

6. Not present when expected, for short : MIA
Missing in action (MIA).

17. Predecessor of Ariel Sharon : EHUD BARAK
Ehud Barak served as Prime Minister of Israel from 1999 to 2001. Barak left office after he called a special election for Prime Minister and lost the vote to Ariel Sharon. Barak resigned from the Knesset and took an advisory job with the US company Electronic Data Systems (EDS), and did some security-related work with a private equity company. In 2007, Barak took over leadership of Israel’s Labor Party and is now the country’s Minister of Defense.

Ariel Sharon is a former Prime Minister of Israel. While still in office in 2005, Sharon suffered two debilitating strokes that left him in a permanent vegetative state from early 2006, a condition which persists to this day.

23. Moravian capital : BRNO
Brno is the second largest city in the Czech Republic (after Prague).

32. Some fuzz : NAP
A “nap” is a soft and perhaps fuzzy surface on cloth or leather.

33. ___-weekly : ALT
An “alt weekly” is an alternative newspaper, one that shies away from general news in favor of more edgy topics and perhaps more local news usually aimed at a younger audience.

35. When a right is sometimes allowed : ON RED
If you’re sitting behind a car that doesn’t make a right on red, it may just be a rental car driven by someone from Europe. Speaking as someone who learned to drive over there, I must admit I held up a few people at red lights when I first visited this country. That’s because in Europe we aren’t allowed to make any move past a red light, unless there is an accompanying green arrow. So, if you’re driving over in Europe, take care …

37. Novelist whose first wife had the same first name, curiously : WAUGH
Evelyn Waugh was an English author, most famous for his fabulous 1945 novel “Brideshead Revisited”. Evelyn Waugh met and fell in love with Evelyn Gardner in 1927. Known to friends as “He-Evelyn” and “She-Evelyn”, the couple were married in 1929 (but divorced one year later).

40. Boxer’s response : ARF
The boxer breed of dog (one of my favorites!) originated in Germany. My first dog was a boxer/Labrador mix, a beautiful animal. Our current family dog is a boxer/pug mix, another gorgeous creature.

41. Title figure in a Mitch Albom best seller : MORRIE
“Tuesday’s with Morrie” is a novel by Mitch Albom, first published in 1997. The story is a work of non-fiction, telling the tale of sociologist Morrie Schwartz and his students, one of whom is the author Mitch Albom. Albom has frequent visits with his old professor when he discovers that Morrie is dying from ALS.

42. When completed, popular TV program starting in 1975 : WHEEL OF FORTUNE
Contestants have been spinning the “Wheel of Fortune” since it first aired in 1975.

62. Land once partly held by the Crusaders: Abbr. : SYR
The modern state that we know as Syria was established after WWI as a French mandate. Syria was granted independence from France in 1946.

63. One of a popular TV game show duo : SAJAK
Pat Sajak took over the hosting of “Wheel of Fortune” back in 1983 and has been doing the job ever since. Sajak had a short run as a talk show host in 1989/1990 and used to sub quite often for Larry King and Regis Philbin.

Down
2. Longtime Ritz competitor : HI-HO
Sunshine Biscuits was an independent producer of cookies and crackers which produced Hi-Ho crackers in competition to the successful Ritz brand. In 1996, Sunshine was absorbed by the Keebler Company and Hi-Ho Crackers was on the list of brands that was discontinued because of the merger.

4. 9-Down fox : TOD
(9. See 4-Down and 36-Down : DISNEY)
Disney’s 1981 animated feature “The Fox and the Hound” is based on a novel of the same name by Daniel P. Mannix. Both the novel and movie tell the tale of a young fox and a young hound who are good friends. The fox and hound struggle to maintain their friendship as they grow older and their animal instincts kick in, and social pressures demand that they become adversaries. Heavy stuff!

6. Certain red : MERLOT
Merlot is one of the main grapes used to make Bordeaux wines, along with Cabernet Sauvignon, Cabernet Franc and Petit Verdot.

7. “Dies ___” : IRAE
“Dies Irae” is Latin for “Day of Wrath”. It is the name of a famous melody in Gregorian Chant, one that is often used as part of the Roman Catholic Requiem Mass.

11. Heavyweight champ after Carnera : BAER
Max Baer was an American Heavyweight Champion of the World in the thirties. Baer held the title for 364 days, and then went into the ring after hardly training at all against the well-prepared James J. Braddock. Braddock was a huge underdog, and yet emerged victorious after 15 rounds (Braddock is the subject of the 2005 movie “Cinderella Man”). By the way, Baer’s son is Max Baer, Jr., the actor who played Jethro on “The Beverly Hillbillies”.

Primo Carnera was an Italian boxer and former world heavyweight champion. Carnera was a big guy for an Italian in his day, standing at almost 6’ 9” tall and weighing over 280 pounds. Given his size, he was called the Ambling Alp.

13. Crumhorn, e.g. : REED
The crumhorn is a woodwind instrument that was very popular during the Renaissance. The name comes from the German “Krumhorn” meaning “bent horn”, which adequately describes the instrument’s shape, somewhat like the letter “J”. As it is a woodwind, the sound is produced by blowing air past a reed, in fact a double-reed in the case of a crumhorn.

25. Mini, for one : IPOD
Apple introduced the iPod Mini in 2004, eventually replacing it with the smaller iPod Nano.

29. Pacific nation : NAURU
Nauru is the world’s smallest island nation, located in the South Pacific 300 km to the east of Kiribati. The island was taken as a colony by Germany in the late 1800s, and came under the administration of Australia, New Zealand and the United Kingdom after WWI. The Japanese invaded during WWII, but Nauru was one of the islands that was bypassed in the US advance across the Pacific towards Japan. Nauru achieved independence in 1968.

30. The British Museum’s ___ Marbles : ELGIN
A frieze is an architectural feature found in many Roman and Greek buildings. Inside a room, frieze is the name given to the upper part of the wall, between the picture rail and the crown molding. Outside of a room, the term frieze is the name given to any extended decoration that is positioned above eye level. Perhaps the most famous frieze comes from the Parthenon in Athens. Over a third of this highly decorated feature was removed from Athens and taken to London in the early 1800s by the Earl of Elgin, where they remain on display in the British Museum. These famous “Elgin Marbles” are subject of much controversy as the legality of the removal is in dispute.

40. “Family Ties” boy : ALEX
Alex P. Keaton is a brilliant character in the sitcom “Family Ties” that ran from 1982-89. Alex was played, very ably, by a young Michael J. Fox. The character is a very vocal Young Republican, which might explain why President Reagan called “Family Ties” his favorite television show.

41. Some Monopoly game equipment : MONEY
The commercial game of Monopoly is supposedly a remake of “The Landlord’s Game” created in 1903 by a Quaker woman called Lizzie Phillips. Phillips used her game as a tool to explain the single tax theory of American economist Henry George. The Landlord’s Game was first produced commercially in 1924. The incredibly successful derivative game called Monopoly was introduced in 1933 by Charles Darrow, who became a very rich man when Parker Brothers bought the rights to the game just two years later in 1935.

48. Devices with spools : VCRS
Video Cassette Recorders (VCRs) have spools. Have you tried to buy one lately?

49. Wells race : ELOI
In the 1895 novel by H. G. Wells called “The Time Machine”, there are two races that the hero encounter in his travels into the future. The Eloi are the “beautiful people” who live on the planet’s surface. The Morlocks are a race of cannibals living underground who use the Eloi as food.

52. Key with three sharps: Abbr. : A-MAJ
My favorite Beethoven symphony, the seventh, was written in the key of A major, as was Mozart’s beautiful Clarinet Quintet.

53. Seven-year-old explorer : DORA
“Dora the Explorer” is a cartoon series shown on Nickelodeon. Part of Dora’s remit is to introduce the show’s young viewers to some Spanish words and phrases.

54. Ural River city : ORSK
The Ural River rises in the Ural Mountains in Russia and flows for half its length through Russian territory until it crosses the border into Kazakhstan, finally emptying into the Caspian Sea.

57. Actor Stephen : REA
Stephen Rea is an Irish actor, whose most famous role was that of the “retired” IRA man in the brilliant 1992 film “The Crying Game”. He also starred in the chilling movie “Stuck”, a 2007 film that is based on a true story about a woman who commits a hit and run on a homeless man. The woman leaves the scene of the crime with the victim still “stuck” in her windshield. The woman leaves the man to die in her garage. Chilling, eh? But as I said, a true story …