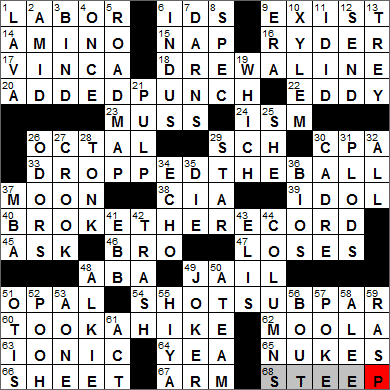 CROSSWORD SETTER: David Ben-Merre
THEME: Did or Didn’t … today’s themed answers can have two meanings, one figurative and one literal, both of which are cleverly woven together in the clue as opposites:

Today’s Wiki-est, Amazonian Googlies
Across
14. Essential ___ acid : AMINO
Amino acids are essential to life in many ways, not least of which is their use as the building blocks of proteins.

16. Big name in rental trucks : RYDER
The Ryder company was founded in 1933 in Miami, Florida by James Ryder. It started out as a concrete hauling company, but changed its focus a few years later to the leasing of trucks.

17. Plant used as ground cover : VINCA
Vinca is a plant genus with six species all native to Europe, Africa and Asia. They are vine-like in their growing behavior, and the name “vinca” comes from the Latin “vincire” meaning “to bind”.

20. Did or didn’t dilute the prom bowlful? : ADDED PUNCH
A prom is a formal dance held upon graduation from high school (we call them just “formals” over in Ireland). The term “prom” is short for promenade, the name given to a type of dance or ball.

The drink we call “punch” can be either alcoholic or non-alcoholic, but usually contains some fruit juice and/or fruit. The original “punch” was served in India, and the name comes from the Hindi word “panch” meaning “five”. This name was used because the traditional drink had “five” ingredients: alcohol, sugar, lemon, water and tea or spices.

24. Suffix with Marx : -ISM
Marxism is the political and economic philosophy espoused by Karl Marx and Friedrich Engels in the mid-to-late 1800s. The main tenet of Marxism is that bourgeois suppression of lower classes in a capitalistic society inevitably leads to a socialist and ultimately classless society.

33. Did or didn’t perform a New Year’s ceremony? : DROPPED THE BALL
The famous New Year’s Eve ball-dropping tradition in Times Square, New York started on January 1st 1908. The original time ball was lit with one hundred 25-watt light bulbs and was dropped at one second after midnight. A fifth version of the ball was introduced in 2008 for the centennial anniversary of the ceremony. The 2008 ball was built by Waterford Crystal and was lit by 9,567 LED bulbs that consumed the same amount of power as ten electric toasters. The current ball was used for the first time in 2009, and is double the size of the 2008 ball at 12 feet in diameter. The ball now sits atop Times Square year round, so you can go see it next time you are in town …

37. Butt out? : MOON
The first recorded mooning incident took place in 66 AD during the First Roman-Jewish War. Roman soldiers decided to moon Jewish pilgrims as they traveled to the Jewish Temple in Jerusalem.

38. Org. based in Langley, Va. : CIA
The CIA headquarters is located in Langley, Virginia in a complex called the George Bush Center for Intelligence, named for former Director of the CIA and US President George H. W. Bush.

39. Fox talent show, for short : IDOL
“American Idol” is a spin-off show that was created after the amazing success of the British television show “Pop Idol”. I can’t abide either program(me) …

40. Did or didn’t surpass a D.J.’s mark for accident-free days? : BROKE THE RECORD
The world’s first radio disk jockey was one Ray Newby of Stockton, California who made his debut broadcast in 1909, would you believe? When he was 16 years old and a student, Newby started to play his records on a primitive radio located in the Herrold College of Engineering and Wireless in San Jose. The records played back then were mostly recordings of Enrico Caruso.

49. Corner Monopoly square : JAIL
The street names in the US version of Monopoly are thoroughfares in or around Atlantic City, New Jersey.

51. Gem for some Libras : OPAL
Here is the “official” list of birthstones by month that we tend to use today:

63. With 44-Down, features of some Greek architecture : IONIC
44D. See 63-Across : COLUMNS
An Ionic column is relatively ornate. It usually has grooves running up and down its length and at the top there is a “scroll” design called a “volute”. The scroll design make Ionic columns popular for the design of academic buildings.

Down
1. Source of pumice : LAVA
Pumice is volcanic rock that is formed by lava cooling, but with bubbles in it due to water and carbon dioxide frothing out of the lava as it cools. Because of the frothy structure, pumice is relatively light and is a great thermal insulator. As such, it is used in construction to make insulating breeze blocks.

6. Pakistan’s chief river : INDUS
The Indus river rises in Tibet and flows through the length of Pakistan and empties into the Arabian Sea, the part of the Indian Ocean lying to the west of the Indian subcontinent. The Indus gives its name to the country of India as “India” used to be the name of the region (which paradoxically is now in modern-day Pakistan) along the eastern banks of the river.

9. Disco ___ (1970s) : ERA
Discotheques started up during WWII in Occupied France. American-style music (like jazz and jitterbug dances) was banned by the Nazis, so French natives met in underground clubs that they called discotheques where records were often played on just a single turntable. After the war, these clubs came out into the open. One famous Paris discotheque was called “Whiskey a Gogo”. In that Paris disco, non-stop music was played using two turntables next to a dance-floor, and this concept spread around the world.

10. Woody tissue : XYLEM
Xylem is a vascular tissue in many plants, the function of which is to transport water and some nutrients. It is xylem tissue that makes up what we know as wood.

28. Honky-___ : TONK
A honky-tonk is a bar with musical entertainment, usually country music. The etymology of the term “honky-tonk” seems unclear.

29. Sirius, e.g. : STAR
When you look up at the night sky, the brightest star you can see is Sirius. Sirius appears so bright to us because it is relatively close to the Earth. Sirius is commonly known as the “Dog Star” because it can be seen in the constellation Canis Major, the “Big Dog”.

30. Core group : CADRE
A “cadre” is most commonly a group of experienced personnel at the core of a larger organization that the small group trains or heavily influences. “Cadre” is a French word meaning a “frame”. We use it in the sense that a cadre is a group that provides a “framework” for the larger organization.

34. Lover of Narcissus : ECHO
In Greek mythology, Echo is one of the Oreads, the mountain nymphs. Echo fell in love with the vain Narcissus, and followed him into the forest one day. Narcissus heard her following him and called out, “Who’s there?”. Echo answered, “Who’s there?” Again he called out, and again Echo echoed his words back to him. Get the gist?

35. Thing with pips : DIE
As we all know, the numbers on dice are arranged so that the opposite faces add up to seven. Given this arrangement, the numbers 1, 2 and 3 all meet at a common vertex. Now, there are two ways of arranging the 1, 2 and 3 around the common vertex, a so called right-handed die (clockwise 1-2-3) or a left-handed die (counterclockwise 1-2-3). Traditionally, dice used in Western cultures are right-handed, whereas Chinese dice are left-handed. Quite interesting …

43. Bush 41 and Bush 43, for two : ELIS
Eli is the nickname for a graduate of Yale University, a term used in honor of the Yale benefactor Elihu Yale.

48. DTs sufferer, for short : ALKIE
The episodes of delirium that can accompany withdrawal from alcohol are called Delirium Tremens (the DTs). The literal translation of this Latin phrase is “trembling madness”.

50. Mr. T TV group : A-TEAM
“The A-Team” is an action television series that originally ran in the eighties. The A-Team was a group of ex-US special forces personnel who became mercenaries. Star of the show was Hollywood actor George Peppard, ably assisted by Mr. T and Robert Vaughan.

Mr. T’s real name is Laurence Tureaud. Mr. T is famous for many things, including the wearing of excessive amounts of jewelry. He started this habit when he was working as a bouncer, wearing jewelry items that had been left behind by customers at a nightclub so that the items might be recognized and claimed. It was also as a bouncer that he adopted the name Mr. T. His catch phrase comes from the movie “Rocky III”. In the film, before he goes up against Rocky Balboa, Mr. T says, “No, I don’t hate Balboa, but I pity the fool”. He parlayed that line into quite a bit of success. He had a reality TV show called “I Pity the Fool”, and produced a motivational video called “Be Somebody … or Be Somebody’s Fool!”.

51. Singer Redding : OTIS
Otis Redding is often referred to as the “King of Soul”, and what a voice he had. Like so many of the greats in the world of popular music it seems, Redding was killed in a plane crash, in 1967 when he was just 26 years old. Just three days earlier he had recorded what was to be his biggest hit, “(Sittin’ On) The Dock of the Bay”.

58. On the sheltered side : ALEE
“Alee” is the direction away from the wind. If a sailor points into the wind, he or she is pointing “aweather”.