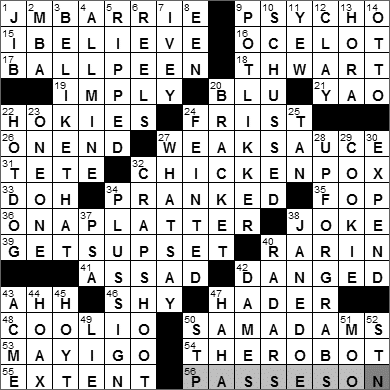 Today’s Wiki-est, Amazonian Googlies
Across
1. Wendy’s creator : JM BARRIE
The author and dramatist J. M. Barrie is best remembered as the creator of Peter Pan. Barrie wrote a play in 1904 called “Peter Pan; or, the Boy Who Wouldn’t Grow Up”. He turned this into a novel called “Peter and Wendy” in 1911. The girl’s name “Wendy” was very uncommon before Barrie named his character, and he is given credit for making the name as popular as it is today.

16. Animal whose name comes from Nahuatl : OCELOT
The ocelot is found mainly in South and Central America, although there have been sightings as far north as Arkansas. An ocelot doesn’t look too different from a domestic cat, and some have been kept as pets. Perhaps most famously, Salvador Dali had one that he carried around everywhere with him.

Nahuatl is a group of languages mainly spoken in Central Mexico.

17. Metal worker : BALL-PEEN
The peen of a hammer is on the head, and is the side of the hammer that is opposite the striking surface. Often the peen is in the shape of a hemisphere (as in a Ball-peen hammer), but usually it is shaped like a claw (mainly for removing nails).

21. Big Chinese import? : YAO
Yao Ming is a professional basketball player from Shanghai who plays for the Houston Rockets. At 7’6″, Yao is the tallest man playing in the NBA.

22. Virginia Tech team : HOKIES
The sports teams of Virginia Tech are known as the “Hokies”. The name comes from a spirit yell that dates back to 1896:

24. Senate majority leader before Reid : FRIST
Bill Frist was Senate Majority Leader for the Republicans from 2003 to 2007. Prior to becoming a politician, Frist was a heart and lung transplant surgeon. He has also been a pilot since he was 16-years-old, and has run seven marathons.

27. Something lame, in modern slang : WEAK SAUCE
Someone who is described by the slang term “weak sauce” is no fun at all, not cool.

32. What’s generally spotted early on? : CHICKENPOX
Chickenpox is a viral infection, a classic disease of childhood most commonly caught by 4-10 year olds. There is a complication that can arise later in life as the virus sometimes reactivates to cause shingles.

33. Sound trademark of 20th Century Fox : D’OH
“The Simpsons” is one of the most successful programs produced by the Fox Broadcasting Company. Homer Simpson’s catchphrase is “D’oh”, which is such a famous exclamation that it has been included in the Oxford English Dictionary (OED) since 2001.

41. Mideast political dynasty name : ASSAD
Dr. Bashar al-Assad is the current President of the Syrian Arab Republic and the son of the former President Hafez al-Assad whom he replaced in 2001. President Assad is a medical doctor, speaks fluent English and conversational French. Assad was studying ophthalmology in London when he met his wife, who is an Englishwoman.

48. “1, 2, 3, 4 (Sumpin’ New)” rapper : COOLIO
Coolio is the stage name of rapper Artis Leon Ivey, Jr. In 2009, Coolio joined fellow-American Le Toya Jackson as one of the house guests in “Celebrity Big Brother” (UK version) and apparently he created quite a stir on the show with some outrageous comments. But Coolio also showed a softer side with a spontaneous and emotional reaction to the election of Barack Obama to the office of US President as he watched the election results coming in live in the Big Brother house.

50. Sierra Nevada competitor : SAM ADAMS
Sam Adams beers are named in honor of the American patriot who played a role in the American Revolution and in the Boston Tea Party. Samuel Adams came from a family associated with the brewing industry, mainly involved in the production of malt.

54. “Dancing Machine” dance : THE ROBOT
“Dancing Machine” is a song recorded by the Jackson 5 in 1973. When the Jackson 5 performed the song on television, Michael Jackson famously showed off his Robot dance technique. Since then, the Robot has become extremely popular as a street dance, with performing artists making robotic moves to popular songs.

55. Gamut : EXTENT
In medieval times, the musical scale was denoted by the notes “ut, re, mi, fa, sol, la”. The term “gamma ut”, shortened to “gamut”, was used to describe the whole scale. By the 1620s, “gamut” was being used to mean the entire range of anything, the whole gamut.

Down
1. Schooner part : JIB
A jib is a triangular sail that is set at the bow of a sailboat.

2. Many a Wall St. holding : MBA
The world’s first MBA degree was offered by Harvard’s Graduate School of Business Administration, in 1908.

7. Phil of poker fame : IVEY
Phil Ivey is a World Poker Tour title winner considered by many to be the best all-around poker play in the world. Ivery has a couple of nicknames, one of which is “the Tiger Woods of Poker”.

8. “Horatio, thou art ___ as just a man …”: Hamlet : E’EN
Horatio is a character in Shakespeare’s “Hamlet”, a friend of the play’s hero and a relatively uninterested party in the intrigue that makes up the storyline. As a trusted friend, Horatio serves as a sounding board for Hamlet, allowing us in the audience to gain more insight into Hamlet’s thinking and character as we listen to the two in conversation.

9. Broth left after boiling greens, in the South : POTLIKKER
Potlikker is the name given to the liquid left behind after the boiling of greens. I remember being “forced” to drink what we called “cabbage water” when I was growing up in Ireland, as it is rich in essential vitamins and minerals. I hated the stuff as a kid, but love it now.

10. Went downhill fast : SCHUSSED
A schuss is a very fast run downhill, not taking any turns to slow the pace of the descent. “Schuss” is a German word for “shot”.

13. Bar mitzvah highlight : HORA
The hora (also “horah”) is a circle dance that originated in the Balkans. The hora was brought to Israel by Romanian settlers, and is often performed to traditional Israeli folk songs. The dance is a regular sight at Jewish weddings and at bar and bat mitzvahs. At such events, it is common for the honorees to be raised on chairs during the dance.

14. Springfield Elementary employee : OTTO
Otto Mann drives the school bus on the TV show “The Simpsons”. Otto is a Germanic character voiced by Harry Shearer, and his name is a play on “Ottoman Empire”. Whenever Bart sees him, he greets Otto with the words “Otto, man!”

25. Khakilike : TAN
“Khaki” is an Urdu word translating literally as “dusty”. The word was adopted as the name of a fabric in the mid-1800s, initially by the British cavalry in India.

29. One might mark a shopping cart’s contents : COOKIE
When you visit a website, often it will leave a little piece of text information called a “cookie” on your computer. As a cookie is a text file, and not executable, it is relatively harmless. However, as browsers routinely read these text files, coolies can be used as “spyware”. Basically, the browser can read the cookie and tell a lot about your browsing habits. This can be a good thing, so when you go back to your favorite websites you will be recognized and this can help you. For example, you may have shopped at a site and you’ll find that your shopping cart still has the items you were looking at, often because the items were stored in a cookie. However, they can be “bad” as some spyware uses the cookies to detect your browsing habits and can direct the browser to do things you may not want it to do. So, I only accept cookies from sites I trust, as they enhance my browsing experience.

38. Miss in court? : JANE DOE
Though the English court system does not use the term today, John Doe first appeared as the “name of a person unknown” in England in 1659, along with another unknown referred to as Richard Roe. Joe Blow is just a variant of John Doe, and Jane Doe is an unknown female.

43. Ne plus ultra : ACME
“Ne plus ultra” is French for “no more beyond” and means just that in English, the high-point.

45. First or last name in the Baseball Hall of Fame : HOYT
Hoyt Wilhelm was a Major league pitcher. Hoyt had a long careerandmade his final appearance (for the LA Dodgers) in 1972, just shy of his 50th birthday.

Waite Hoyt was the most successful pitcher playing for the New York Yankees in the 1920s. After he retired from the game, Hoyt spent almost thirty years as a radio and television broadcaster.

52. Union, e.g.: Abbr. : STN
There are a lot of stations called “Union Station” in the US. This is because the generic “union station” was one built by two or more railroad companies acting in concert or “union”, sharing tracks and facilities.