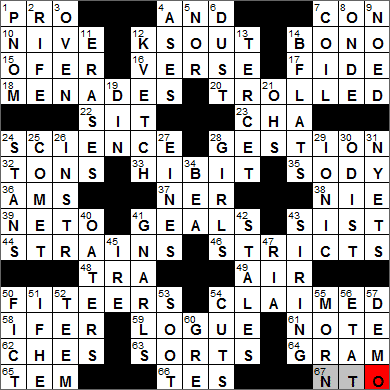 CROSSWORD SETTER: Joe Krozel
THEME: Missing the Pros and Cons … all of today’s across answers start with either PRO or CON, but the PROS and CONS are missing in the grid. Also, the black squares in the grid form “+” and “-” signs, indicative of pros and cons:

Today’s Wiki-est, Amazonian Googlies
Across
14. For free : PRO BONO
The Latin term “pro bono publico” means “for the public good”, and is usually shorted to “pro bono”. The term applies to professional work that is done for free or at a reduced fee as a service to the public.

32. Atom parts : PROTONS
A proton is a subatomic particle, with at least one found in the nucleus of every atom. A proton is not a “fundamental particle” though, as it itself is made up of three quarks; to up quarks and one down quark.

35. Study of verse : PROSODY
Prosody is the study of the metrical structure of poetry.

37. Family name on “Roseanne” : CONNER
The comedienne Roseanne Barr is perhaps best known as the star of her own sitcom called “Roseanne” in which she played the character Roseanne Conner. In 2012 Barr unsuccessfully vied for the Green Party’s nomination for US President. She didn’t give up though, and was successful in winning the nomination of the Peace and Freedom Party. In the 2012 presidential election she earned over 60,000 votes, and placed sixth in the list of candidates.

38. Singer Stevens : CONNIE
Connie Stevens is an actress and singer who was born Concetta Ingoglia in Brooklyn, New York in 1938. Her father was a musician using the stage name Teddy Stevens, so Connie took the Stevens name as her own.

48. Iran-___ : CONTRA
The Iran-Contra affair (also called “Irangate”) came to light in 1986. The “Iran” part of the scandal was the sale of arms to Iran by the Reagan administration, initially to facilitate the release of US hostages. This was done in secret largely because there was ostensibly a US arms embargo in place against Iran. The “Contra” part of the scandal arose when the man in charge of the operation, Oliver North, took funds from the arms sales and funneled the cash to the Contra militants who were fighting to topple the government in Honduras.

49. 1997 Nicolas Cage/John Malkovich thriller : CON AIR
“Con Air” is an entertaining action movie that was released in 1997. The film tells the story of a bunch of convicts being transported by air who escape and take control of the plane. If you take a look at the movie’s closing credits you’ll see the words “In Memory of Phil Swartz”. Swartz, a welder with the special effects team, was killed in a tragic accident when a static model of the plane used in the movie fell on him.

62. Big shells : CONCHES
Although conch is now used as a generic term for largish sea snails and their shells, the true conch belongs to a specific group of gastropods. The “meat” of a conch is very popular making the conch the second most popular edible snail after “escargots”. The conch shell can of course be used as a wind instrument, and the true conch is also a good source for pearls.

65. For a while : PRO TEM
“Pro tempore” can be abbreviated to “pro tem” or “p.t.” “Pro tempore” is a Latin phrase that best translates as “for the time being”. It is used to describe a person who is acting for another, usually a superior.

66. French tales : CONTES
“Conte” is the French word for “tale”. There is an idiomatic phrase in France “conte de bonne femme” which translates literally as “tale of the good woman”. We would use the equivalent phrase “old wive’s tale”.

Down
1. ___-Penh : PNOM
Phnom Penh (also “Pnom Penh”) is the capital of Cambodia, and has been so since the French colonized the country in the late 1800s. The city’s name translates from the Khmer language as “Hill of Penh”.

4. “___ Death” (Grieg work) : ASE’S
“Ase’s Death” is a movement in Edvard Grieg’s beautiful “Peer Gynt” suite. The suite is a collection of incidental music that Grieg composed for Ibsen’s play of the same name. Ase is the widow of a peasant, and the mother of Peer Gynt.

7. Cobra’s shape, at times : COIL
“Cobra” is the name given to a group of snakes, some of which are in different animal families. The term “cobra” is reserved for those snakes that can expand their neck ribs to create a hood. The name “cobra” is an abbreviated form of “cobra de capelo” which translates from Portuguese as “snake with hood”.

12. Complain : KVETCH
The word “kvetch” of course comes to us from Yiddish, with “kvetshn” meaning “to complain” or “squeeze”.

19. Cacophony : DIN
“Cacophony” is such a lovely word, used to describe a harsh or jarring sound. The term arises from the Greek “kakos” (bad) and “phone” (voice).

21. Quaker cereal : OH’S
There used to be two varieties of Oh’s made by Quaker Oats Company. One was Honey Nut Oh’s, later known as Crunchy Nut Oh’s, but it was phased out. The second type was called Crunchy Graham Oh’s, and is still available today as Honey Graham Oh’s.

24. Laurel and Lee : STANS
Stan Laurel was an English comic actor (born Arthur Stanley Jefferson), who made a great career for himself in Hollywood. Laurel ended up at the Hal Roach studio directing films, intent on pursuing a career in writing and directing. However, he was a sometime actor and was asked to step in when another comic actor, Oliver Hardy, was injured and couldn’t perform. Laurel and Hardy started to share a stage together during that time and when it was clear they worked so well together, their partnership was born. Oh, and the oft-quoted story that Clint Eastwood is the son of Stan Laurel … that’s just an urban myth.

Stan Lee did just about everything at Marvel Comics over the years, from writing to being president and chairman of the board.

25. Astronomer’s sighting : COMET
Comets and asteroids are similar, both being relatively small celestial bodies orbiting the sun. Comets differ from asteroids in that they have a coma or tail, especially when they are close enough to the sun. The coma and tail are temporary fuzzy atmospheres that develop due to the presence of solar radiation.

29. Like some columns : IONIC
An Ionic column is relatively ornate. It usually has grooves running up and down its length and at the top there is a “scroll” design called a “volute”. The scroll motif makes Ionic columns popular for the design of academic buildings. The term “Ionic” means “pertaining to Ionia”, with Ionia being an ancient territory that is located in modern-day Turkey.

30. Keats, for one : ODIST
The poet John Keats is famous for writing a whole series of beautiful odes. The most renowned are the so-called “1819 Odes”, a collection from the year 1819 that includes famous poems such as “Ode on a Grecian Urn”, “Ode to a Nightingale” and “Ode to Psyche”.

40. Pictures of the Old West : OATERS
The term “oater” that is used for a western movie comes from the number of horses seen, as horses love oats!

45. Dander : IRE
The phrases “to get one’s Irish up” and “to get one’s dander up” mean to get riled up, to get angry. I guess we are always picking on the poor Irish!

60. Test for an M.A. seeker : GRE
Passing the Graduate Record Examination (GRE) is usually a requirement for entry into graduate school here in the US.