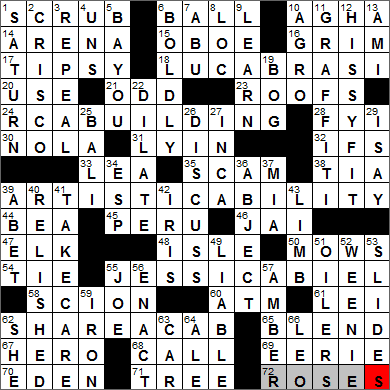 CROSSWORD SETTER: Gary Cee
THEME: The Cab Inside … each of today’s themed answers are two words, with CAB spanning the space between those two words:

Today’s Wiki-est, Amazonian Googlies
Across
6. Event Cinderella attended : BALL
The folk tale about “Cinderella” was first published by French author Charles Perrault in 1697. The storyline of the tale may date back as far as the days of Ancient Greece.

10. Turkish military leader : AGHA
“Aga” (also “agha”) is a title that was used by both civil and military officials in the Ottoman Empire.

15. Certain woodwind : OBOE
The oboe is perhaps my favorite of the reed instruments. The name “oboe” comes from the French “hautbois” which means “high wood”. When you hear an orchestra tuning before a performance you’ll note (pun intended!) that the oboe starts off the process by playing an “A”. The rest of the musicians in turn tune to that oboe’s “A”. Oh, and if you want to read a fun book (almost an “exposé”) about life playing the oboe, you might try “Mozart in the Jungle” by oboist Blair Tindall. I heard recently that the folks at HBO are working towards a pilot based on the book, and I can’t wait to see it!

18. Personal enforcer in “The Godfather” : LU(CA B)RASI
Luca Brasi is one of Don Corleone’s most loyal “enforcers” in Mario Puzo’s novel “The Godfather”. In the big screen adaptation, Luca Brasi is played by ex-wrestler and professional bodyguard Lenny Montana. The role launched a very successful television character-acting career for Montana.

24. Onetime name at New York’s Rockefeller Center : R(CA B)UILDING
What is now called the GE Building in New York City, was originally known as the RCA Building, with the name changing in 1988 after the 1986 takeover of RCA by GE. The building was completed in 1933 as part of the Rockefeller Center and was named for its main tenant, RCA. Famously, the skyscraper’s address of 30 Rockefeller Center is routinely shortened to “30 Rock”.

30. Home to the N.F.L.’s Saints, informally : NOLA
The city of New Orleans, Louisiana has the nickname “The Big Easy”. This name might come from the early 1900s when musicians found it relatively “easy” to find work there. The city is also known by the acronym NOLA, standing for New Orleans, LA.

31. The Eagles’ “___ Eyes” : LYIN’
The Eagles song “Lyin’ Eyes” was recorded in 1975. Written by band members Don Henley and Glenn Frey, the lyrics were inspired by a meeting between a man and a woman the composers witnessed in Dan Tana’s Bar & Restaurant in Los Angeles. Henley and Frey imagined a scenario of secret love, and “Lyin’ Eyes” was born.

38. Aunt, in Acapulco : TIA
The Mexican city of Acapulco is on the southwest coast of the country, in the state of Guerrero. The name “Acapulco” translates from the local language into “at the big reeds”.

44. Actress Arthur : BEA
Actress Bea Arthur’s most famous roles were on television, as the lead in the “All in the Family” spin-off “Maude” and as Dorothy Zbornak in “The Golden Girls”. Arthur also won a Tony for playing Vera Charles on stage in the original cast of “Mame” in 1966, two years after she played Yente the matchmaker in the original cast of “Fiddler on the Roof”.

45. Country south of Ecuador : PERU
Peru’s name comes from the word “Biru”. Back in the early 1500s, Biru was a ruler living near the Bay of San Miguel in Panama. The territory over which Biru ruled was the furthest land south in the Americas known to Europeans at that time. The Spanish conquistador Francisco Pizarro was the first European to move south of Biru’s empire and the land that he found was designated “Peru”, a derivative of “Biru”.

46. ___ alai : JAI
Even though jai alai is often said to be the fastest sport in the world because of the speed of the ball, in fact golf balls usually get going at a greater clip.

47. Antlered animal : ELK
The elk (also known as the wapiti) is the one of the largest species of deer in the world, with only the moose being bigger. Early European settlers were familiar with the smaller red deer back in their homelands, so when they saw the “huge” wapiti they assumed it was a moose, and incorrectly gave it the European name for a moose, namely “elk”. The more correct name for the beast is “wapiti”, which means “white rump” in Shawnee. It’s all very confusing …

58. Descendant : SCION
Scion comes from the old French word “sion” or “cion”, meaning “a shoot or a twig”. In botanical terms today, a scion is used in grafting two compatible plants together. In grafting, one plant is selected for its root system (the “rootstock”), and the other plant is selected for its stems, leaves and fruit (the “scion”). The term scion migrated naturally into the world of family history. A scion is simply a descendant, a son or a daughter and therefore a branching point in the family tree.

61. Luau neckwear : LEI
“Lei” is the Hawaiian word for “garland, wreath”, although in more general terms a “lei” is any series of objects strung together as an adornment for the body.

62. Split the taxi fare … and what the words do in 18-, 24-, 39- and 55-Across : SHARE A CAB
A hansom cab is a very specific design of horse and buggy that was patented by Joseph Hansom in 1834 in England. The “cab” in the name is short for “cabriolet”, a prior design of carriage on which the hansom was based. It’s from “hansom cab” that we get our modern term “cab”.

67. Foot-long sandwich : HERO
“Hero” is another name for a submarine sandwich. The hero originated in New York City in the 1800s among Italian immigrants who wanted an Italian sandwich that reminded them of home. The name “hero” was first coined in the 1930s, supposedly by a food critic in the “New York Herald Tribune” when he wrote that “one had to be a hero” to finish the gigantic sandwich. Hero is a prevalent term to this day in New York City, reserved for a submarine sandwich with an Italian flavor.

70. Adam and Eve’s garden : EDEN
According to the Book of Genesis, Adam and Eve lived in a garden “in” Eden, with Eden being geographically located by reference to four rivers including the Tigris and the Euphrates. Some scholars hypothesize that Eden was located in Mesopotamia, which encompasses much of modern-day Iraq.

72. Traditional Valentine’s Day gift : ROSES
Saint Valentine’s Day was chosen by Pope Gelasius I in 496 AD to honor various martyrs with the name Valentine. However, the saints’ day was dropped by the Catholic church in 1969, by Pope Paul VI. Try telling that to Hallmark though …

Down
1. Planet with rings : SATURN
Saturn is easily visible from Earth with the unaided eye, but we need some help to see the planet’s famous rings. Galileo was the first person to see Saturn’s rings, when he turned his primitive telescope towards the night sky in 1610. However, he misinterpreted what he was observing and assumed that the rings were in fact two smaller planets located at either side of the larger Saturn.

2. Shortening brand : CRISCO
The Crisco brand of shortening was the first shortening to be made entirely from vegetable oil. Although that sounds like a good thing, it’s actually made by hydrogenating vegetable oil so that it has physical properties similar to the animal shortening it was designed to replace. This hydrogenation turns good fats into bad fats, so medical professionals suggest limited intake.

5. Louisiana body of water : BAYOU
The exact origins of the word “bayou” is uncertain, but it is thought perhaps to come from the Choctaw (a Native American people from the southeast) word “bayuk”, meaning “small stream”.

7. ___ Dhabi : ABU
Abu Dhabi is one of the seven Emirates that make up the federation known as the United Arab Emirates (UAE). The two largest members of the UAE (geographically) are Dubai and Abu Dhabi, the only two of the seven members that have veto power over UAE policy. Before 1971, the UAE was a British Protectorate, a collection of sheikdoms. The sheikdoms entered into a maritime truce with Britain in 1835, after which they became known as the Trucial States, derived from the word “truce”.

11. Writing on the wall : GRAFFITI
“Graffiti” is the plural of “graffito”, the Italian for “a scribbling”. The word was first used to describe ancient inscriptions on the walls in the ruins of Pompeii.

25. 48-Across east of Java : BALI
Bali is the most important tourist destination in Indonesia and is an island lying east of Java. In recent years, Bali’s tourist industry has been badly hit in the aftermath of two terrorist bombings. The first one, in 2002, killed 202 people, mainly foreign tourists in a nightclub.

27. Ancient native of 45-Across : INCA
Spanish conquistador Francisco Pizarro discovered the Incas in 1526, marking the beginning of the end for an ancient civilization that was to be ravaged by brutal Spanish colonists and by imported smallpox. The last leader of the Inca was Atahualpa. Pizarro staged a mock trial and then condemned Atahualpa to execution by burning. A Spanish friar intervened on behalf of the condemned man, as Atahualpa believed that if he was burned his soul would not move on to the afterlife. Pizarro, was kind enough to have Atahualpa garroted instead.

37. Actress Farrow : MIA
Mia Farrow is an energetic, award-winning actress who really hasn’t looked back in her career since her first leading role, in “Rosemary’s Baby” back in 1968. Farrow’s on-screen celebrity is matched by the interest created by her personal life. Her first husband was Frank Sinatra, and the couple had a wedding in 1966 that received a lot of attention partly due to the couple’s age difference (she was 21, he was 50). Farrow’s second husband was almost as famous, the magnificent musician André Previn. Farrow then moved in with Woody Allen, a relationship that famously fell apart when Farrow discovered that Allen was having a sexual relationship with Soon-Yi, one of the adopted daughters from her marriage with André Previn.

39. Aid and ___ : ABET
The word “abet” comes into English from the Old French “abeter” meaning “to bait” or “to harass with dogs” (it literally means “to make bite”). This sense of encouraging something bad to happen morphed into our modern usage of “abet” meaning to aid or encourage someone in a crime.

51. Edmonton hockey team : OILERS
The National Hockey League’s Edmonton Oilers are so called because they are located in Alberta, Canada … oil country.

52. Hot dog, informally : WEENIE
What we call a wiener in this country is known as a Vienna sausage in Germany. It was first produced by a butcher from Frankfurt who was living in Vienna, hence the name “Wiener”, which is German for “of Vienna”. Paradoxically, the same sausage is called a Frankfurter in Vienna, as it was created by someone from Frankfurt. It’s all very confusing …

55. QB Namath or Montana : JOE
The legendary quarterback Joe Namath played most of his professional football games with the New York Jets. Namath had played college football with the University of Alabama but left school without finishing his degree, to play professionally. Many years later he enrolled in Alabama’s External Degree program, and graduated with a BA in December 2007, at 64 years of age. Well done, Joe!