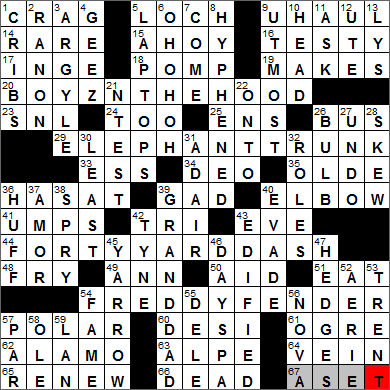 CROSSWORD SETTER: Dan Schoenholz
THEME: Finished with the Car Parts … each of the themed answers finishes with a part of a car:

20A. 1991 film that earned John Singleton a Best Director nomination : BOYZ N THE HOOD
29A. What a blind man mistakes for a snake, in a fable : ELEPHANT TRUNK
44A. Test at a football tryout : FORTY-YARD DASH
54A. Singer of the 1975 #1 hit “Before the Next Teardrop Falls” : FREDDY FENDER

9. Self-mover’s rental : U-HAUL
The U-Haul company was started by married couple Leonard Shoen and Anna Mary Carty in Ridgefield, Washington in 1945. The Shoens used $5,000 of seed money to build trailers in their garage, and then cleverly recruited gas station owners as franchisees with whom they would split the rental revenue. There are now about 15,000 U-Hail dealers across the country.

17. “Picnic” playwright William : INGE
Playwright William Inge had a run of success on Broadway in the early fifties. Inge’s most celebrated work of that time was the play “Picnic”, for which he was awarded a Pulitzer Prize. The original 1953 cast of “Picnic” included a young male actor making his debut on Broadway. His name was Paul Newman.

18. Circumstance’s partner : POMP
Sir Edward Elgar was the quintessential English composer, inextricably associated with his “Pomp and Circumstance” marches (including “Land of Hope and Glory”) and the “Enigma Variations”.

20. 1991 film that earned John Singleton a Best Director nomination : BOYZ N THE HOOD
“Boyz N the Hood” is a 1991 movie about gang culture in South Central LA. Cuba Gooding, Jr. and Ice Cube have starring roles, and it was directed by Jon Singleton. Singleton was only 23 years old at the time of filming, and his resulting nomination for a Best Director Oscar made him the youngest ever nominee for that category of Academy Award.

23. NBC fixture since ’75 : SNL
NBC first aired a form of “Saturday Night Live” (SNL) in 1975 under the title “NBC’s Saturday Night”. The show was actually created to give Johnny Carson some time off from “The Tonight Show”. Back then “The Tonight Show” had a weekend episode, and Carson convinced NBC to pull the Saturday or Sunday recordings off the air and hold them for subsequent weeknights in which Carson needed a break. NBC turned to Lorne Michaels and asked him to put together a variety show to fill the vacant slot, and he came up with what we now call “Saturday Night Live”.

25. U.S.N. rank : ENS
Ensign is (usually) the most junior rank of commissioned officer in the armed forces. The name comes from the tradition that the junior officer would be given the task of carrying the ensign flag.

29. What a blind man mistakes for a snake, in a fable : ELEPHANT TRUNK
The story of the blind men and the elephant is told in many religious traditions around the world, although it originated on the Indian subcontinent. Most versions involve a group of blind men touching an elephant, with each touching a different part. The man touching the trunk thinks he feels a snake, the man touching a leg feels a column, and the man holding the tail feels a rope. The resulting confusion is resolved in different ways, depending on the version of the tale.

34. “Gloria in Excelsis ___” : DEO
“Gloria in excelsis Deo” is a Latin hymn, the title of which translates as “Glory to God in the highest”.

35. Shoppe sign word : OLDE
The word “olde” wasn’t actually used much earlier than the 1920s. “Olde” was introduced to give a quaint antique feel to brand names, shop names etc.

39. Wander (about) : GAD
“To gad about” is to move around with little purpose. The term comes from the Middle English “gadden” meaning “to hurry”.

44. Test at a football tryout : FORTY-YARD DASH
Back in the 1800s, “dashboard” was the name given to a “board” placed at the front of a carriage to stop mud from “dashing” against the passengers in the carriage, mud that was kicked up by the hoofs of the horses. Quite interesting …

49. ___ Arbor, Mich. : ANN
Ann Arbor, Michigan was founded in 1824 by John Allen and Elisha Rumsey. Supposed they used the name “Annarbour” in recognition of stands of bur oak that were on the land they had purchased (“arbor”), and in recognition of their wives, both of whom were called “Ann”.

54. Singer of the 1975 #1 hit “Before the Next Teardrop Falls” : FREDDY FENDER
Freddy Fender is the stage name of Mexican-American singer Baldemar Huerta. Fender’s most successful record was his 1974 recording of “Before the Next Teardrop Falls”. Fender had been asked by a record producer to overdub vocals for the instrumental track to the song written by Vivian Keith and Ben Peters. Fender did so, taking only a few minutes of his time. Surprising everyone, the song was at the top of the country charts a few months later, and top of the pop charts soon after. Not bad for a few minutes work …

60. Lucy’s husband or son : DESI
Lucille Ball was at the height of her success while she was married to Desi Arnaz. Lucy had several miscarriages before she gave birth to her first child (Lucie) in 1951, just one month before her fortieth birthday. A year and a half later, while “I Love Lucy” was garnering large audiences, she became pregnant with her second child (Desi, Jr.), a pregnancy that was written into the television show’s script. In fact, the day that Lucy gave birth on the show was the same day that she gave birth in real life.

61. Shrek, e.g. : OGRE
Before “Shrek” was a successful movie franchise and Broadway musical, it was a children’s picture book called “Shrek!” authored and illustrated by William Steig. The title “Shrek!” came from the German/Yiddish word Schreck, meaning “fear” or “terror”.

62. San Antonio landmark, with “the” : ALAMO
The famous Alamo in San Antonio, Texas was originally known as Mission San Antonio de Valero. The mission was founded in 1718 and was the first mission established in the city. The Battle of the Alamo took place in 1836, a thirteen-day siege by the Mexican Army led by President General Antonio Lopez de Santa Anna. Only two people defending the Alamo Mission survived the onslaught. One month later, the Texian army got its revenge by attacking and defeating the Mexican Army in the Battle of San Jacinto. During the surprise attack on Santa Anna’s camp, many of the Texian soldiers were heard to cry “Remember the Alamo!”.

63. Mont Blanc, par exemple : ALPE
Mont Blanc is the highest mountain in the Alps. The name “Mont Blanc” translates from French into “white mountain”. The mountain lies on the border between France and Italy, and it has been generally accepted for decades that the summit lies within French territory. However, there have been official claims that the summit does in fact fall within the borders of Italy.

8. Like Olivia Newton-John’s last name : HYPHENED
“Hyphened” is valid, albeit rare, alternative to “hyphenated”. I checked …

10. Focus of a phrenologist : HEAD
Phrenology is the practice of reading a person’s personality by studying the contours of the person’s skull.

12. Beehive State native : UTE
The Ute is a group of Native American tribes that now resides in Utah and Colorado. The Ute were not a unified people as such, but rather a loose association of nomadic groups.

21. Mushroom cloud producer, in brief : N-TEST
There are two classes of nuclear weapons, both of which get the energy for the explosion from nuclear reactions. The first nuclear bombs developed, called atomic bombs (A-bombs), use fission reactions. In an atomic bomb, uranium nuclei are split into smaller nuclei with the release of an awful lot of energy in the process. The second class of nuclear weapons are fusion bombs. Fusion devices are also called thermonuclear weapons or hydrogen bombs (H-bombs). In a fusion reaction, the nuclei of hydrogen isotopes are fused together to form bigger nuclei, with the release of even greater amounts of energy than a fission reaction.

31. Legendary firefighter Red : ADAIR
Red Adair was a famous fighter of fires in oil fields, and was a native of Houston, Texas. Adair’s exploits were the inspiration for a 1968 movie called “Hellfighters” starring John Wayne.

43. Spiritually uplifted : EDIFIED
“To edify” is to provide instruction in order to improve spiritually, morally or intellectually. The intent is to “build up” someone’s faith or morality, and so “edify” comes from the Latin “aedificare” meaning “to build, construct”. This Latin root also gives us our word “edifice”.

45. Peter of Peter, Paul and Mary : YARROW
Peter Yarrow is the “Peter” in the folk music group Peter, Paul and Mary. Two of Yarrow’s most famous compositions are “Puff, the Magic Dragon” (co-written with Leonard Lipton) and “The Wedding Song (There is Love)”.

56. Kind of lox : NOVA
Nova lox is salmon that has been cured with a mild brine. The term originally applied to salmon from Nova Scotia.

Lox is a cured salmon fillet that has been finely sliced. The term “lox” comes into English via Yiddish, and derives from the German word “Lachs” meaning salmon.

59. Office computer linkup, for short : LAN
You may have a Local Area Network (LAN) in your house. If you’ve got a PC and a router or switch, likely attached to some modem, then you have a LAN.