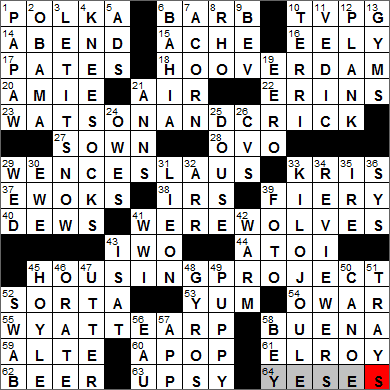 18A. Construction on the Colorado River : HOOVER DAM (Who?)
23A. DNA modelers : WATSON AND CRICK (What?)
29A. Sainted king who inspired a carol : WENCESLAUS (When?)
41A. Lycanthropes : WEREWOLVES (Where?)
45A. Publicly funded residential complex : HOUSING PROJECT (How?)
55A. Lawman at the O.K. Corral : WYATT EARP (Why?)

Today’s Wiki-est, Amazonian Googlies
Across
1. Some Lawrence Welk music : POLKA
The polka is a dance from central Europe, one that originated in Bohemia in the mid-1800s. It’s thought that “polka” comes from a Czech word meaning “little half”, reflecting the little half-steps included in the basic dance.

The style of music with which bandleader Lawrence Welk was associated became known as “champagne music”. The term was coined by a dancer in the William Penn Hotel in Pittsburgh when Welk was appearing there with his band in the thirties.

17. Cracker spreads : PATES
Pâté is a rich spreadable paste made up of a mixture of ground meat and fat, to which various vegetables, herbs and spices may be added. The most famous version is pâté de foie gras, made from the fattened livers of geese (“foie gras” means “fat liver” in French).

18. Construction on the Colorado River : HOOVER DAM (Who?)
When the magnificent Hoover Dam was completed in 1936, it was the largest hydroelectric plant in the world as well as being the world’s largest concrete structure. The dam is named after Herbert Hoover for his role in having the dam built when he was Secretary of Commerce and his later support as US President. When the dam was finally put into service in 1936, the project was two years ahead of schedule. Those were the days …

20. French girlfriend : AMIE
A male friend in France is “un ami”, and a female friend is “une amie”.

22. Brockovich and others : ERINS
Erin Brockovich is an environmental activists who is famous for the role she played in building a case against Pacific Gas & Electric for contaminating drinking water. Her story was told in a 2000 film title “Erin Brockovich” that starred Julia Roberts. Brockovich herself actually appeared in the film as she was given a cameo as a waitress in a restaurant scene.

23. DNA modelers : WATSON AND CRICK (What?)
Francis Crick and James Watson discovered that DNA had a double-helix, chain-like structure, and published their results in Cambridge in 1953. To this day the discovery is mired in controversy, as some crucial results collected by fellow researcher Rosalind Franklin were used without her permission or even knowledge.

28. Lacto-___ vegetarian : OVO
A lacto-ovo vegetarian is someone who does not consume meat or fish, but does eat eggs (ovo) and dairy (lacto) products.

29. Sainted king who inspired a carol : WENCESLAUS (When?)
“Good King Wenceslas” is one of my favorite Christmas carols. The main character in the carol is based on Saint Wenceslaus I, Duke of Bohemia. The lyrics were written by Englishman John Mason Neale and the tune is Scandinavian in origin. That’s quite a cultural mix, but it seems to work!

37. Furry allies of Luke Skywalker : EWOKS
The Ewoks are creatures who live on the moon of Endor, first appearing in “Star Wars Episode VI: Return of the Jedi”. They’re the cute and cuddly guys that look like teddy bears.

Anakin Skywalker is the principal character in all six of the “Star Wars” movies. His progress chronologically through the series of films is:

– Episode I: Anakin is a 9-year-old slave boy who earns the promise of Jedi training by young Obi-Wan Kenobi.
– Episode II: Anakin is 18-years-old and goes on a murdering rampage to avenge the killing of his mother.
– Episode III: Anakin is 21-years-old and a Jedi knight, but he turns to the Dark Side and becomes Darth Vader. His wife Padme gives birth to twins, Luke and Leia Skywalker.
– Episode IV: Anakin, as Darth Vader, comes into conflict with his children, Luke Skywalker and the Princess Leia.
– Episode V: Darth Vader attempts to coax his son Luke over to the dark side, and reveals to Luke that he is his father.
– Episode VI: Luke learns that Leia is his sister, and takes on the task of bringing Darth Vader back from the Dark Side in order to save the Galaxy. Vader saves his son from the Emperor’s evil grip, dying in the process, but his spirit ends up alongside the spirits of Yoda and Obi-Wan. They all live happily ever after …

38. Org. with a staff of auditors : IRS
The Internal Revenue Service (IRS) was set up during the Civil War to raise money to cover war expenses. Prior to the introduction of income tax in 1862, the government was funded by levies on trade and property.

41. Lycanthropes : WEREWOLVES (Where?)
A lycanthrope is a werewolf, with the term coming from the Greek for wolf (lykos) and man (anthropos).

43. ___ Jima : IWO
Iwo Jima is a volcanic island located south of Tokyo that today is uninhabited. There were about a thousand Japanese civilians living on the island prior to WWII. In 1944, there was a massive influx of Japanese military personnel in anticipation of the inevitable US invasion. As the Japanese military moved in, the civilians were forced out and no one has lived there since.

44. Yours, in Tours : A TOI
Tours is the largest city in the Centre region of France. It is said that the people of Tours speak the “purest” form of French in the whole country, and when spoken by a local it is also said to be free of any accent.

55. Lawman at the O.K. Corral : WYATT EARP (Why?)
Wyatt Earp is famous as one of the participants in the gunfight at the O.K. Corral. Earp was a city policeman in Wichita, Kansas and also in Dodge City, Kansas. Earp was also deputy sheriff in Tombstone, Arizona where the O.K. Corral gunfight took place. Years later, Earp joined the Alaska Gold Rush and with a partner built and operated the Dexter Saloon in Nome.

58. ___ Vista (part of Disney) : BUENA
Buena Vista is a brand name used a lot in the past by the Walt Disney Company. The name was chosen as the main Walt Disney offices are located on Buena Vista Street in Burbank, California.

62. Molson or Michelob : BEER
The Molson Brewery in Montreal is the oldest brewery in North America. In fact, Molson (now owned by Coors) is the second oldest company in Canada, after the Hudson’s Bay Company.

Down
1. Elongated fruit from a tree : PAPAW
The papaw (also “pawpaw”) tree is native to North America and has a fruit that looks similar to a papaya. Papaw probably gets its name from the word papaya, but papaw and papaya are two distinct species.

2. 44th president : OBAMA
President Obama’s first name, Barack, is Swahili with roots in an old Arabic word meaning “blessed”. Barack was the President’s father’s name. President Obama’s middle name is Hussein, an Arabic word meaning “good” or “handsome one”. Hussein was the name of the President’s grandfather on the paternal side. His surname, Obama, doesn’t really have a translation, but is a common name among the Luo tribe of Kenya.

8. Letter after pi : RHO
Rho is the Greek letter that looks just like our Roman letter “p”.

9. Pepsi or O.J. : BEV
The Pepsi-Cola formulation was developed by one Caleb Bradham who made the drink at home and sold it as “Brad’s Drink”. Bradham’s aim was to provide a drink that was pleasant to taste, that would aid digestion and boost energy. Included in the formula were pepsin (a digestive enzyme) and kola nuts. These two ingredients inspired the Pepsi Cola brand name that is used today.

10. Country singer Gibbs : TERRI
Terri Gibbs is a country music singer. Gibbs had thirteen singles that made the Billboard country singles charts in the eighties. Gibbs was born blind.

11. Pertaining to Hindu scriptures : VEDIC
The Vedas are a body of ancient Indian texts, the oldest Hindu scriptures. The word “véda” is Sanskrit and means “knowledge, wisdom”.

19. Architect Saarinen : EERO
Eero Saarinen was a Finnish American architect, renowned in this country for his unique designs for public buildings such as Gateway Arch in St. Louis, Dulles International Airport Terminal, and the TWA building at JFK.

21. St. ___ (London neighborhood) : ANN’S
St Ann’s is a neighborhood in the London Borough of Haringey. The neighborhood takes its name from the 19th-century church called St. Ann’s that was originally located in a rural community, but was soon swallowed up in the growth of the English capital city.

26. Rite Aid competitor : CVS
The name CVS once stood for Consumer Value Stores, although these days the company uses the acronym to dentote Convenience, Value and Service.

33. 1,000 watt-seconds : KILOJOULE
James Joule was an English physicist who spent much of his life working in the family brewing business. Joule used his work in the brewery to study the relationship between heat and mechanical work. In honor of his achievements, his name is used for the unit of energy in the International System of Units (i.e. the joule).

34. Ones quoted on Rotten Tomatoes : REVIEWERS
“Rotten Tomatoes” is a website that mainly provides reviews and ratings of movies.

45. Card game rules expert : HOYLE
Edmond Hoyle was a writer, most famous for documenting the rules and play of card games. In particular, Hoyle first wrote a book on the game of whist that was very popular. Such was the success of Hoyle’s treatises that we use the phrase “according to Hoyle” to mean “according to some respected authority”.

48. Greek sandwiches : GYROS
A gyro is a traditional Greek dish, a sandwich made with pita bread containing meat, tomato, onion and tzatziki (a yogurt and cucumber sauce). The meat for gyros is usually roasted on a tall vertical spit and is sliced from the spit as required. The name “gyro” comes from the modern Greek word “gyros” meaning “circle”, a reference to the meat turning as it is grilled in a rotating circular motion.

52. Deck washer : SWAB
“Swabbie” (also “swab, swabber”) is a slang term for a sailor, which we’ve been using since the late 1700s. A “swab” was originally a member of the crew assigned to the swabbing of the ship’s decks.

58. Ottoman nabob : BEY
Bey is a Turkish title for a chieftain. In the days of the Ottoman Empire, the term “bey” was used for many different officials, but traditionally it referred to the leader of a small tribal group. Today “bey” is used very much like “mister”.