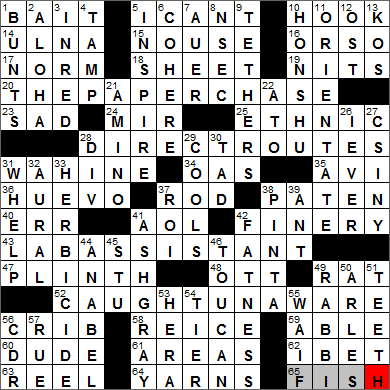 CROSSWORD SETTER: Peter A. Collins
THEME: Fishy Inside … four of today’s answers have types of fish hidden inside them (and we have four fishy answers at the corners of the grid: BAIT, HOOK, REEL & FISH):

Today’s Wiki-est, Amazonian Googlies
Across
10. Velcro component : HOOK
The hook-and-loop fastener we now call Velcro was invented in 1941 by Georges de Mestral, a Swiss engineer. Mestral noticed that the seeds of the burdock plant (burrs or burs) stuck to his clothes. Under the microscope he found hooks on the burrs that grabbed hold of loops in his clothing. After years of development, he came up with a way of simulating the natural hook using man-made materials, and Velcro was born.

20. 1973 film for which John Houseman was named Best Supporting Actor : THE PA(PER CH)ASE
“The Paper Chase” is a 1973 film that led to a very enjoyable spinoff TV series of the same name that ran in the seventies and eighties. The film was based on a 1970 novel, also called “The Paper Chase”, by John Jay Osborn, Jr. The actor John Houseman does a marvelous job playing an intimidating professor teaching first-year law students at Harvard, both in the film and in television series.

24. Soviet launch of 1986 : MIR
The Russian Mir Space Station was a remarkably successful project, with the station still holding the record for the longest continuous manned presence in space, at just under ten years. Towards the end of the space station’s life, the years began to take their toll. There was a dangerous fire, multiple system failures, and a collision with a resupply ship. The Russian commitment to the International Space Station drained funds for repairs, so Mir was allowed to reenter the Earth’s atmosphere and burn up in 2001.

31. Surfer girl, maybe : WAHINE
“Wahine” is the word for “woman”, in both Hawaiian and Maori.

34. Grp. that suspended Honduras in 2009 : OAS
The Organization of American States (OAS) has its headquarters in Washington, D.C. All the independent states in the Americas are members of the group except Honduras, which had its membership suspended after the country’s 2009 coup.

37. Serling or Steiger : ROD
Rod Serling is of course the man behind, and in front of, the iconic science-fiction TV series “The Twilight Zone”. Serling used a lot of the shows he created to advance his strongly held views against war (he was a soldier in WWII), and against racism.

Rod Steiger played some powerful roles on the screen, perhaps most memorably portraying the Chief of Police in the 1967 drama “In the Heat of the Night”, for which he won a Best Actor Oscar. Steiger was married five times, including a 10-year marriage to fellow actor Claire Bloom. Together Bloom and Steiger had a daughter, the British opera singer Anna Steiger.

38. Eucharist plate : PATEN
The paten and chalice hold a special place in many Christian services. The paten is the plate that holds the bread, and the chalice the wine. The bread and wine are used to represent the body and blood of Christ.

41. Chat room inits. : AOL
Founded as Quantum Computer Services in 1983, the company changed its name in 1989 to America Online. As America Online went international, the acronym AOL was used in order to shake off the “America-centric” sound to the name. During the heady days of AOL’s success the company could not keep up with the growing number of subscribers, so people trying to connect often encountered busy signals. That’s when users referred to AOL as “Always Off-Line”.

43. Igor, for one : LA(B ASS)ISTANT
Igor has been the assistant to Dracula, Frankenstein and Young Frankenstein among others. Igor is almost invariably portrayed as a hunchback.

47. Column base : PLINTH
A plinth is a block on which a column is based. The Greek word “plinthos” means “squared stone”.

Down
1. Baseball taps : BUNTS
To bunt in baseball is to barely hit the ball, just enough to have it roll slowly in front of the infielders.

2. “Welcome to Honolulu!” : ALOHA
The Hawaiian word “Aloha” has many meanings in English: affection, love, peace, compassion and mercy. More recently “aloha” has come to mean “hello” and “goodbye”, but only since the mid-1800s.

7. Violinist Leopold : AUER
Leopold Auer was a Hungarian violinist, as well as a conductor and composer. Auer wrote a small number of works for the violin, the most famous of which is the “Rhapsodie Hongroise” written for violin and piano.

8. Fraction of a fraction of a min. : NSEC
“Nanosecond” is more correctly abbreviated to “ns”, and really is a tiny amount of time … one billionth of a second.

21. ___ acid : AMINO
Amino acids are essential to life in many ways, not least of which is their use as the building blocks of proteins.

27. TV spinoff of 2004 : CSI: NY
“CSI: NY” is the best of the CSI franchise of television shows, in my humble opinion, since the original “CSI” set in Las Vegas went off the boil a few years ago. Stars of the New York show are Gary Sinise and Sela Ward.

30. Smidgen : TAD
Back in the 1800s “tad” was used to describe a young child, and this morphed into our usage meaning a small amount in the early 1900s. The original use of “tad” for a child is very likely a shortened version of “tadpole”.

Our word “smidgen” meaning a small amount, might come from the Scots word “smitch” that means the same thing or “a small insignificant person”.

38. Ship of 1492 : PINTA
As we all know, Christopher Columbus used three ships in his first voyage across the Atlantic: the Santa Maria, the Niña and the Pinta. The Pinta was the fastest of the three, and it was from the Pinta that the New World was first spotted, by a sailor called Rodrigo de Triana who was a lookout on the fateful day. Pinta was a nickname for the ship that translated as “the painted one”. The Pinta’s real name has been lost in mists of time.

44. Women’s tennis champ Medina : ANABEL
Anabel Medina is a Spanish tennis player who reached a career-high ranking of No. 16 in 2009.

45. Original Beatle Sutcliffe : STU
Stu Sutcliffe was one of the original four members of The Silver Beatles (as The Beatles were known in their early days), along with John Lennon, Paul McCartney and George Harrison. Sutcliffe apparently came up with name “Beatles” along with John Lennon, as a homage to their hero Buddy Holly who was backed by the “Crickets”. By all reports, Sutcliffe wasn’t a very talented musician and was more interested in painting. He went with the group to Hamburg, more than once, but he eventually left the Beatles and went back to art school, actually studying for a while at the Hamburg College of Art. In 1962 in Hamburg, Sutcliffe collapsed with blinding headaches. He died in the ambulance on the way to hospital, his death attributed to cerebral paralysis.

50. Van Gogh home for a while : ARLES
A few years ago I had the privilege of living just a short car-ride from the beautiful city of Arles in the South of France. Although Arles has a long and colorful history, the Romans had a prevailing influence over the city’s design. Arles has a spectacular Roman amphitheater, arch, circus as well as old walls that surround the center of the city. In more modern times, it was a place Vincent van Gogh often visited, and where he painted his famous “Cafe Terrace at Night”, as well as “Bedroom in Arles”.

55. Cosette, e.g., in “Les Misérables” : WAIF
The 1980 musical “Les Misérables” is an adaptation of the 1862 novel of the same name by Victor Hugo. The show opened in London in 1985, and is the longest running musical in the history of London’s West End. My wife and I saw “Les Miz” in the Queen’s Theatre in London quite a few years ago, but were only able to get tickets in the very back row. The old theater’s seating is very steep, so the back row of the balcony is extremely high over the stage. One of the big events in the storyline is the building of a street barricade over which the rebels fight. At the height we were seated we could see the stagehands behind the barricade, sitting drinking Coke, even smoking cigarettes. On cue, the stagehands would get up and catch a dropped rifle, or an actor that had been shot. It was pretty comical. I didn’t really enjoy the show that much, to be honest. Some great songs, but the musical version of the storyline just didn’t seem to hang together for me.