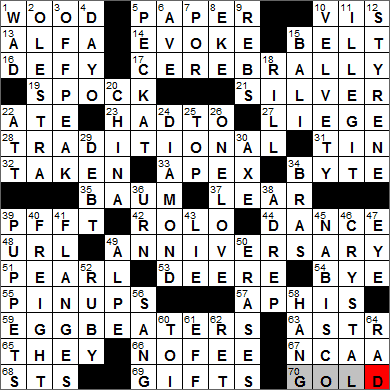 CROSSWORD SETTER: Michael David
THEME: Union Recognition … today’s themed clues are numbers, and each answer is the anniversary gift that is traditionally given after that number of years of marriage:

Today’s Wiki-est, Amazonian Googlies
Across
10. Word on either side of “à” : VIS
We use the French phrase “vis-a-vis” to mean “with regard to” or “in relation to”. The literal translation from the French is “face to face”. When we imported the phrase into English in the mid-1700s, it had two other meanings that were more faithful to the original. Firstly, it could be a “face to face” meeting (not so today), and secondly, it was a type of carriage in which the occupants faced each other.

13. Sporty auto, for short : ALFA
The “Alfa” in Alfa Romeo is actually an acronym, standing for Anonima Lombarda Fabbrica Automobili (“Lombard Automobile Factory, Public Company”). ALFA was an enterprise founded in 1909 and which was taken over by Nicola Romeo in 1915. In 1920 the company name was changed to Alfa Romeo.

15. Asteroid area : BELT
The vast majority of asteroids in the Solar System are found in the main asteroid belt, which is located between the orbits of Mars and Jupiter. Four large asteroids (Ceres, Vesta, Pallas and Hygiea) make up about half the mass of the asteroid belt and are 400-950 km in diameter. The total mass of the belt is just 4% of the mass of our Moon.

19. Pointy-eared TV character : SPOCK
Leonard Nimoy played the logical Mr. Spock in the original “Star Trek” television series. Spock has to be the most popular character on the show, and he keeps popping up in “Star Trek” spin offs to this day. Nimoy first worked alongside William Shatner (Captain Kirk) in an episode of “The Man from U.N.C.L.E.” (I loved that show!), with Nimoy playing a bad guy and Shatner playing an U.N.C.L.E. recruit.

27. Feudal lord : LIEGE
A liege was a feudal lord, one to whom service or allegiance was owed under feudal law. “Liege” was also the term used for one who owed allegiance or service to the lord. Very confusing …

34. Giga- follower : BYTE
In the world of computers, a “bit” is the basic unit of information. A bit has a value of 0 or 1. A “byte” is a small collection of bits (usually 8), the number of bits needed to uniquely identify a character of text.

35. Creator of Oz : BAUM
L. Frank Baum (the “L” is for Lyman) is of course famous for writing “The Wonderful Wizard of Oz”. Writing early in the 20th century, Baum actually described in his books things that had yet to be invented, like television, laptop computers and wireless telephones.

37. King of tragedy : LEAR
Shakespeare was inspired to write his famous drama “King Lear” by the legend of “Leir of Britain”, the story of a mythological Celtic king.

42. Caramel-filled candy : ROLO
Rolo was a hugely popular chocolate candy in Ireland when I was growing up. Rolo was introduced in the thirties in the UK, and is produced under license in the US by Hershey. I was a little disappointed when I had my first taste of the American version as the center is very hard and chewy. The recipe used on the other side of the Atlantic calls for a soft gooey center.

44. Prom, e.g. : DANCE
A prom is a formal dance held upon graduation from high school (we call them just “formals” over in Ireland). The term “prom” is short for promenade, the name given to a type of dance or ball.

53. Combine name : DEERE
John Deere invented the first commercially successful steel plow in 1837. Prior to Deere’s invention, farmers used an iron or wooden plow that constantly had to be cleaned as rich soil stuck to its surfaces. The cast-steel plow was revolutionary as its smooth sides solved the problem of “stickiness”.

54. Free pass, of sorts : BYE
A team or player can get a bye into the next round of a tournament, meaning there’s no need to play in the current round. This can perhaps happen because an opposing player/team fails to turn up, or maybe because there aren’t enough teams to make the first round. Sometimes seeded players are awarded a bye and are automatically in a tournament.

67. Sportsmanship Award org. : NCAA
The National Collegiate Athletic Association (NCAA) dates back to the Presidency of Theodore Roosevelt. When his son broke his nose playing football at Harvard, President Roosevelt turned his attention to the number of serious injuries and even deaths occurring in college sports. He instigated meetings between the major educational institutions leading to the formation of the Intercollegiate Athletic Association of the United States (IAAUS) in 1906, which was given the remit of regulating college sports. The IAAUS became the NCAA in 1910.

68. Bourbon and Beale: Abbr. : STS
When New Orleans was founded, the House of Bourbon was ruling France. Bourbon Street was named in its honor.

Down
2. Faux fat : OLESTRA
Olean is a brand name for the fat substitute, Olestra. Naturally occuring fats are made of a glycerol molecule holding together three fatty acids. Olestra is instead made of a sucrose molecule holding together several fatty acid chains. Olestra has a similar taste and consistency as natural fat, but has zero caloric impact on the body as it is too large a molecule to pass through the intestinal wall and passes right out of the body. Personally, I would steer clear of it. Olestra is banned in Britain and Canada due to concerns about side effects, but I guess someone knows the right palms to grease (pun intended!) here in the US, so it’s in our food.

4. Harry Belafonte catchword : DAY-O
“Day-O (The Banana Boat Song)” is a traditional folk song from Jamaica. It is sung from the standpoint of dock workers unloading boats on the night shift, so daylight has come and they want to go home. The most famous version of “Day-O” was recorded by Harry Belafonte in 1956.

8. Squeeze (out) : EKE
To “eke out” means to “make something go further or last longer”. For example, you could eke out your income by cutting back on expenses. I always have a problem with the commonly cited definition of “eke out” as “barely get by”. Close but no cigar, I say …

9. Gen. Beauregard’s men : REBS
P. G. T. Beauregard was a general in the Confederate Army during the Civil War. Beauregard’s most notable success was leading the defense of Petersburg, Virginia against vastly superior Union forces.

12. Compound in disposable coffee cups : STYRENE
Styrofoam is an extruded polystyrene foam made by The Dow Chemical Company. Styrofoam has loads of applications, including home insulation and use as a buoyancy aid.

15. “South Pacific” setting : BALI
Bali is the most important tourist destination in Indonesia and is an island lying east of Java. In recent years, Bali’s tourist industry has been badly hit in the aftermath of two terrorist bombings. The first one, in 2002, killed 202 people, mainly foreign tourists in a nightclub.

18. Small brook : RILL
Rill, meaning a small brook or rivulet, has German roots, the same roots as “Rhine”, the name of the major European river.

26. Bob Marley classic : ONE LOVE
“One Love” is a classic reggae song from 1977 recorded by Bob Marley and the Wailers. A ska version of “One Love” had been released by the Wailers as early as 1965, but it is the 1977 release that we all remember, I am sure.

34. Support providers : BRAS
The word “brassière” is of course French in origin, but it isn’t the word the French use for a “bra”. In France what we call a bra is known as a “soutien-gorge”, translating to “held under the neck”. The word “brassière” is indeed used in France but there it describes a baby’s undershirt, a lifebelt or a harness. “Brassière” comes from the Old French word for an “arm protector” in a military uniform (“bras” is the French for “arm”). Later “brassière” came to mean “breastplate” and from there the word was used for a type of woman’s corset. The word jumped into English around 1900.

36. Barista’s container : URN
The person who serves coffee in a coffee shop is often called a “barista”. “Barista” is the Italian for “bartender”.

43. Links concern : LIE
The oldest type of golf course is a links course. The name “links” comes from the Old English word “hlinc” meaning “rising ground”. “Hlinc” was used to describe areas with coastal sand dunes or open parkland. As a result, we use the term “links course” to mean a golf course that is located at or on the coast, often amid sand dunes. The British Open is always played on a links course.

The Fig Newton is based on what is actually a very old recipe that dates back to Ancient Egypt. Whereas we grew up with “Fig Rolls” in Ireland, here in America the brand name “Fig Newton” was used, named after the town of Newton, Massachusetts where they were first produced.

49. Mont Blanc, par exemple : ALPE
Mont Blanc is the highest mountain in the Alps. The name “Mont Blanc” translates into “white mountain”. The mountain lies on the border between France and Italy and it has been generally accepted for decades that the summit lies within French territory. However, there have been official claims that the summit does in fact fall within the borders of Italy.

60. Parisian pronoun : TOI
“Toi” is the French word for “you”, when talking to someone with whom you are familiar.

62. Emeritus: Abbr. : RET
Emeritus (female form “emerita”) is a term in the title of some retired professionals, particularly those from academia. Originally an emeritus was a veteran soldier who had served his time. The term comes from the Latin verb “emerere” meaning to complete one’s service.