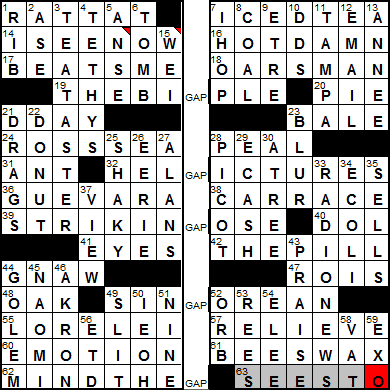 CROSSWORD SETTER: Milo Beckman
THEME: Bridging the Gap … today’s grid has a GAP right down the middle, and five themed answers include the letters “GAP”:

19A. Locational nickname with origins in horse racing : THE BI(G AP)PLE
32A. Noted series of paintings by Andrew Wyeth : HEL(GA P)ICTURES
39A. Preparing to be shot, say : STRIKIN(G A P)OSE
49A. Dweller on the Straits of Johor : SIN(GAP)OREAN
62A. Tube warning … or an apt title for this puzzle? : MIND THE (GAP)

Today’s Wiki-est, Amazonian Googlies
Across
7. Arizona product : ICED TEA
The Arizona Beverage Company has been making flavored iced tea drinks since 1992. Paradoxically, the company is based in New York State.

19. Locational nickname with origins in horse racing : THE BI(G AP)PLE
Apparently the first published use of the term “Big Apple” to describe New York City dates back to 1909. Edward Martin wrote the following in his book “The Wayfarer in New York”:

21. Operation time : D-DAY
The most famous D-Day in history was June 6, 1944, the date of the Normandy landings in WWII. The term “D-Day” is used by the military to designate the day on which a combat operations are to be launched, especially when the actual date has yet to be determined. What D stands for seems to have been lost in the mists of time although the tradition is that D just stands for “Day”. In fact, the French have a similar term, “Jour J” (Day J), with a similar meaning. We also use H-Hour to denote the hour the attack is to commence.

23. Christian of film : BALE
Christian Bale is an actor from Wales in the UK, although he is better known for his work on this side of the Atlantic. Bale’s big break in movies came in 1987 when whe on the starring role in Spielberg’s “Empire of the Sun” at only 13 years of age. He has also played Batman three times, in “Batman Begins” (2005), “The Dark Knight” (2008) and “The Dark Knight Rises” (2012).

24. Antarctic body named for an Englishman : ROSS SEA
The Ross Sea is a bay in the Southern Ocean of Antarctica. It was discovered by one James Ross in 1841. A more recent discovery, in the waters of the Ross Sea, was a 33 feet long giant squid, captured in 2007.

31. Raid target : ANT
Raid insecticide has been killing bugs since 1956.

32. Noted series of paintings by Andrew Wyeth : HEL(GA P)ICTURES
Andrew Wyeth was known as a realist painter and “the painter of the people” in recognition of his popularity with the man in the street. His neighbor, Helga Testorf, posed for a total of 247 paintings over a 14 year period, a series known as “The Helga Pictures”. The remarkable thing is that neither Wyeth’s wife nor Testorf’s husband knew anything about the portrait sessions or the paintings.

36. Face seen on many T-shirts : GUEVARA
Ernesto “Che” Guevara was born in Argentina, and in 1948 he started to study medicine at the University of Buenos Aires. While at school he satisfied his need to “see the world” by taking two long journeys around South America, the story of which are told in Guevara’s memoir later published as “The Motorcycle Diaries”. While travelling, Guevara was moved by the plight of the people he saw and their working conditions and what he viewed as capitalistic exploitation. In Mexico City he met brothers Raul and Fidel Castro and was persuaded to join their cause, the overthrow of the US-backed government in Cuba. He rose to second-in-command among the Cuban insurgents, and when Castro came to power Guevara was influential in repelling the Bay of Pigs Invasion and bringing Soviet nuclear missiles to the island. Guevara left Cuba in 1965 to continue his work as a revolutionary. He was captured by Bolivian forces in 1967, and was executed. Fidel Castro led the public mourning of Guevara’s death, and soon the revolutionary was an icon for many left-wing movements around the world.

38. 500, e.g. : CAR RACE
The first Indy 500 race was held on Memorial Day in 1911. The winner that day was one Ray Harroun. Harroun had seen someone using a rear view mirror on a horse-drawn vehicle, and decided to fit one on his Marmon “Wasp” motor car. Supposedly that was the first ever use of a rear view mirror on a motor vehicle.

40. Capital of Australia: Abbr. : DOL
The capital (currency) of Australia is the Australian dollar, or “dol.” for short.

42. Medical subject of Time magazine covers of 1967 and 2010 : THE PILL
“The Pill” is more correctly called “the combined oral contraceptive pill”. The formulation is a combination of an estrogen called estradiol and a progestogen called progestin.

55. Shipwreck cause, perhaps : LORELEI
Lorelei is the name of a legendary mermaid who lured fishermen by singing a beautiful song so that they steered their boats onto rocks lurking beneath the water’s surface.

62. Tube warning … or an apt title for this puzzle? : MIND THE (GAP)
“Mind the Gap” is a very famous announcement made in several stations on the London Underground. The announcement is needed as there can be a large gap between the doorways of trains and the platform. This gap arises because the platforms of some stations are quite curved, while the train cars are of course straight.

Down
2. Enzyme suffix : -ASE
Enzymes are basically catalysts, chemicals that act to increase the rate of a particular chemical reaction. For example starches will break down into sugars over time, especially under the right conditions, but in the presence of the enzyme amylase (found in saliva), this production of sugar happens very, very quickly.

5. “As I Lay Dying” father : ANSE
“As I Lay Dying” is a novel by William Faulkner first published in 1930. The book has an unusual structure, with stream of consciousness writing throughout. There is one whole chapter that I’d like to quote here:

9. Being, in Bordeaux : ETRE
Bordeaux is perhaps the wine producing capital of the world. Wine has been produced in the area since the eighth century. Bordeaux has an administrative history too. During WWII, the French government relocated from Paris to the port city of Bordeaux when it became clear that Paris was soon to fall to the Germans. After the German’s took France, the capital was famously moved to Vichy.

27. Composer Menken and others : ALANS
Alan Menken is a composer from New York City best known from the scores he produced for Disney movies. Menken won Oscars for the scores for “The Little Mermaid”, “Beauty and the Beast”, “Aladdin” and “Pocahontas”.

28. Loop of lace : PICOT
A picot is a loop of thread, either for function or for decoration, at the edge of some knitted or tatted material.

29. Bitcoins, e.g. : ECASH
Bitcoins are digital units of currency that are used on some Internet sites. Bitcoins are the most popular alternative currency used on the Web today. If all the bitcoins in circulation today were converted to cash they would be worth over $100 million.

34. Reason for a food recall : E COLI
Escherichia coli (E. coli) are usually harmless bacteria found in the human gut, working away quite happily. However, there are some strains that can produce lethal toxins. These strains can make their way into the food chain from animal fecal matter that comes into contact with food designated for human consumption.

35. Emulates a bear : SELLS
The terms “bull” and “bear” markets come from the way in which each animal attacks. A bull thrusts his horns upwards (an “up” market), whereas a bear swipes with his paws downward (a “down” market).

43. Encomium : PRAISE
Encomium is a formal expression of praise, and comes into English via Latin. ‘Emcomium” is derived from the Greek “komos”, the word for a banquet or procession.

44. Automaton of Jewish folklore : GOLEM
Golem is Yiddish slang for “dimwit”. In Jewish folklore a golem is an anthropomorphic being made out of inanimate matter, somewhat like an unintelligent robot.

45. Feminist Wolf : NAOMI
Naomi Wolf is an author and noted feminist. Wolf’s most famous work is “The Beauty Myth” published in 1991. Wolf’s thesis is that more prominence women gain in society, the more pressure there is to conform to a standard of physical beauty. Consequences of the added pressure are increasing occurrences of eating disorders and use of elective cosmetic surgery.

46. City intersected by I-76 and I-77 : AKRON
For part of the 1800s, the Ohio city of Akron was the fasting growing city in the country, feeding off the industrial boom of that era. The city was founded in 1825 and its location, along the Ohio and Erie canal connecting Lake Erie with the Ohio River, helped to fuel Akron’s growth. Akron sits at the highest point of the canal and the name “Akron” comes from the Greek word meaning “summit”. Indeed, Akron is the county seat of Summit County.

50. Architect ___ Ming Pei : IEOH
I. M. Pei (full name: Ieoh Ming Pei) is an exceptional American architect, born in China. Of Pei’s many wonderful works, my favorite is the renovation of the Louvre in Paris, especially the Glass Pyramid in the courtyard.

54. Gen. Robert ___ : E LEE
Robert E. Lee is of course renowned as a southern officer in the Civil War. Lee was a somewhat reluctant participant in the war in that he opposed the secession of his home state of Virginia from the Union. At the beginning of the war, President Lincoln invited Lee to take command of the whole Union Army but he declined, choosing instead to stay loyal to his home state.