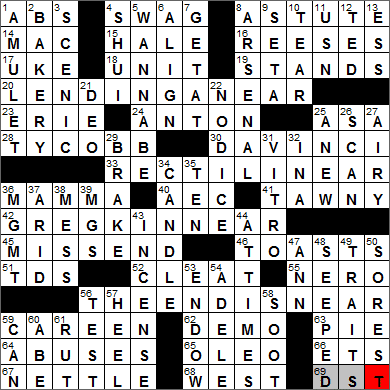 CROSSWORD SETTER: Steve Salmon
THEME: The End is Nigh … each of the today’s themed answers ends with the letters NEAR:

Today’s Wiki-est, Amazonian Googlies
Across
14. Apple computer, informally : MAC
Macintosh (also “Mac”) is a line of computers from Apple Inc. The first Mac was introduced in 1984, and I remember someone showing me one at work in those early days of personal computing. There was a piece of white plastic connected to the main computer by a cord, and I was amazed when the guy showed me that it controlled where the cursor was on the screen. My colleague told me that this lump of plastic was called “a mouse” …

15. ___ and hearty : HALE
“Hale” is an adjective meaning “healthy”. Both the words “hale” and “healthy” derive from the the Old English “hal” meaning healthy.

16. ___ Pieces : REESE’S
Reese’s Pieces are an extension to the successful Peanut Butter Cups line, and are pieces of candy that look like M&Ms but are filled with peanut butter.

17. Hawaiian music maker, informally : UKE
The ukulele originated in the 1800s and mimicked a small guitar brought to the Hawaiian Islands by Portuguese immigrants.

18. The “U” in C.P.U. : UNIT
The Central Processing Unit (CPU) is the main component on the “motherboard” of a computer. The CPU is the part of the computer that carries out most of the functions required by a program. Nowadays you can get CPUs in everything from cars to telephones.

19. Bleachers : STANDS
At a sports event one often sits in the “bleachers”. “Bleachers” is a particularly American term for the tiered stands that provide seating for spectators. These seats were originally wooden planks, and as they were uncovered they would be “bleached” by the sun, giving them the name we use today. Sometimes the fans using the bleachers might be referred to as “bleacherites”.

20. Listening : LENDING AN EAR
“Friends, Romans, countrymen, lend me your ears …” is the start of a famous speech by Mark Antony from William Shakespeare’s “Julius Caesar”.

23. Smallest Great Lake, by volume : ERIE
Erie is the shallowest of the Great Lakes, something for which nearby residents must be quite grateful. Being relatively shallow, Erie freezes over part way through most winters putting an end to the lake effect snow that falls in the snow belt extending from the lake’s edge.

24. Composer Bruckner : ANTON
Anton Bruckner was an Austrian composer, not a favorite of mine as he embraces the use of dissonances (I’m a sober traditionalist!). His Symphony No. 7 is perhaps his most popular work. He created a slow and mournful movement for the work in recognition of the impending death of Richard Wagner, whom he greatly admired.

28. First player elected to the Baseball Hall of Fame : TY COBB
Ty Cobb was one of the richest baseball players of all times. When he retired, Cobb was a major stockholder of the Coca-Cola Corporation. By the time he passed away in 1961, Cobb had an even bigger investment in General Electric. He left an estate after his death worth about $86m (in 2008 dollars).

30. “Mona Lisa” painter : DA VINCI
Leonardo da Vinci’s masterpiece that we know in English as the “Mona Lisa” is called “La Gioconda” in Italian, the language of the artist. It’s also known as “La Joconde” by the Government of France which owns the painting and displays it in the Louvre Museum in Paris. The title comes from the name of the subject, almost certainly Lisa Gherardini, wife of Francesco del Giocondo. Giocondo was a wealthy silk merchant in Florence who commissioned the painting for the couple’s new home to celebrate the birth of their second son.

36. “___ mia!” : MAMMA
The hit musical “Mamma Mia!” was written to showcase the songs of ABBA. I’m a big fan of ABBA’s music, so I’ve seen this show a couple of times and just love it. “Mamma Mia!” is such a big hit on the stage that on any given day there are at least seven performances going on somewhere in the world. There is a really interesting film version of the show that was released in 2008. I think the female lead Meryl Streep is wonderful in the movie, but the male leads, not so much …

40. Nuclear agency established by H.S.T. : AEC
The Atomic Energy Commission (AEC) was set up right after WWII in 1946 with the aim of promoting the peaceful use of atomic energy. Establishing the AEC was a significant move made by President Truman as it passed control of atomic energy from the military to the civilian sector. The AEC continued to operate until 1974 when its functions were divided up into two new agencies: the Energy Research and Development Administration and the Nuclear Regulatory Commission (NRC).

42. Oscar nominee for “As Good as It Gets” : GREG KINNEAR
Greg Kinnear is a favorite actor of mine, probably best recognized for his Oscar-nominated performance in the excellent film “As Good as it Gets” from 1997.

55. Emperor said to have fiddled while Rome burned : NERO
The Great Fire of Rome raged for five and a half days in 64 AD. Of the fourteen districts of Rome, three were completely destroyed and seven more suffered serious damage. The emperor at the time was of course Nero, although reports that he fiddled, played his lyre or sang while the city burned; those accounts are probably not true. In fact, Nero was staying outside of Rome when the fire started, and rushed home on hearing the news. He organized a massive relief effort, throwing open his own home to give shelter to many of the citizens who were left living on the street.

59. What speeding cars do around turns : CAREEN
“Careen” dates back to 1590 when it meant “to turn a ship on its side, exposing the keel”. The word evolved from the Middle French word “carene” meaning “keel”. Our modern usage, meaning to lean or tilt, only dates back as far as the 1880s. Careen should not be confused with “career”, a verb meaning to move rapidly. One has to “career” from side-to-side in order to “careen”.

63. Dessert often served à la mode : PIE
In French, “à la mode” simply means “fashionable”. In America, the term has come to describe a way of serving pie, usually with ice cream, or as I recall from when I lived in Upstate New York, with cheese.

65. Bar next to butter, maybe : OLEO
Emperor Louis Napoleon III of France announced a competition to develop a substitute for butter, a substitute that would be more accessible to the lower classes and more practical for the armed forces. In 1869, a French chemist called Hippolyte Mege-Mouries came up with something that he called oleomargarine, which was eventually manufactured under the trade name “margarine”. The name “oleomargarine” also gives us our generic term “oleo”.

67. Stinging plant : NETTLE
Most nettle species have stinging hairs that secrete formic acid. This formic acid is the same chemical that is found in the venom injected with a bee or ant sting. The Latin word for ant is “formica” and gives its name to the acid.

68. Pioneer’s direction : WEST
Horace Greeley was a newspaper editor and politician. In the media industry, Greeley founded and edited the “New York Tribune”, which was a very influential paper in the 1800s. In an 1865 editorial he wrote the famous words “Go West, young man, go West and grow up with the country.” As a politician, Greeley ran for US President in the 1872 election. He lost that election to Ulysses S. Grant in a landslide. Greeley died not long after the votes were cast, making him the only presidential candidate to have died prior to the counting of electoral college votes.

69. Summer clock schedule: Abbr. : DST
On the other side of the Atlantic, Daylight Saving Time (DST) is known as “summer time”. The idea behind summer/daylight-savings is to move clocks forward an hour in spring and backwards in the fall so that afternoons have more daylight.

Down
4. Feng ___ (New Age concern) : SHUI
Feng shui is the ancient Chinese tradition of arranging objects, buildings and other structures in a manner that is said to improve the lives of the individuals living in or using the space. “Feng shui” translates as “wind-water”, a reference to the belief that positive and negative life forces ride the wind and scatter, but are retained when they encounter water.

8. Munitions depot : ARSENAL
Our word “arsenal” comes from the Italian “arzenale”, a work adapted from the Arabic for “workshop”. There was a large wharf in Venice called the Arzenale that became associated with the storage of weapons and ammunition, and this led to our contemporary usage of “arsenal”.

11. Ensign’s org. : USN
Ensign is (usually) the most junior rank of commissioned officer in the armed forces. The name comes from the tradition that the junior officer would be given the task of carrying the ensign flag.

12. Baseball great Williams : TED
As well as playing for the Boston Red Sox, Ted Williams served as a pilot in the Marine Corps in World War II and the Korean War.

26. Read, as a bar code : SCAN
UPC stands for Universal Price Code or Universal Product Code. The first UPC-marked item to get scanned in a store was on June 26, 1974 at 08:01 a.m. at Marsh’s supermarket in Troy, Ohio. It was a 10-pack of Wrigley’s Juicy Fruit chewing gum …

31. In ___ fertilization : VITRO
In vitro fertilization is the process in which egg cells are fertilized by sperm cells outside of the body “in vitro”, meaning “in glass”, usually in a culture dish.

38. Meal in the military : MESS
“Mess” first came into English about 1300 and described the list of food needed for a meal, from the Old French word “mes” meaning a portion of food or a course at a meal. This usage in English evolved into “mess” meaning a jumbled mass from the concept of “mixed food”. At the same time, the original usage in the sense of a food for a meal surfaced again in the military in the 1500s when a “mess” was a communal eating place.

39. Classic British roadsters : MGS
My neighbor used to keep his MG Midget roadster in my garage (away from his kids!) back in Ireland many moons ago. The Midget was produced by MG division of the British Motor Corporation from 1961 to 1979, with the MG acronym standing for “Morris Garages”.

47. ___ Taylor (clothing retailer) : ANN
There was no such woman as “Ann Taylor” associated with the Ann Taylor line of clothes. The name was chosen by the marketing professionals because “Ann” was considered to be “very New England” back in 1954 when the stores first opened, and “Taylor” suggested that clothes were carefully “tailored”.

60. Lincoln, familiarly : ABE
Abraham Lincoln was born in a one-room log cabin in Hardin County, Kentucky making him the first president born in the West. His formal education was limited to a year and a half of schooling, but fortunately for us, Lincoln was an avid reader and educated himself over the years. Even though he was from a rural area, he avoided hunting and fishing because he did not like to kill animals even for food.