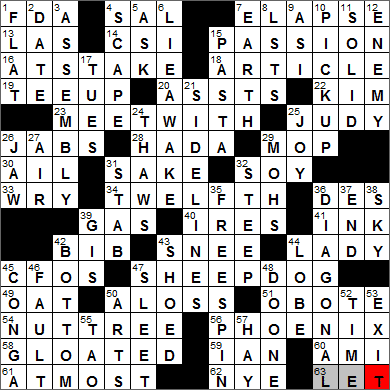 CROSSWORD SETTER: Michael David
THEME: Sidelines … the left SIDE and the right SIDE of the grid is where we find all of our themed answers today, and all of those answers can precede the word LINES:

21D. Where to find coaches at football games … or a description of the answers to the 16 starred clues? : SIDELINES

Today’s Wiki-est, Amazonian Googlies
Across
1. Pharmaceutical co. regulator : FDA
The Food and Drug Administration (FDA) was in effect created by the Food and Drug Act signed into law by President Theodore Roosevelt in 1906.

4. Mule of song : SAL
The song “Fifteen Miles on the Erie Canal” was written in 1905. The lyrics are nostalgic and look back to the days when traffic on the canal was pulled by mules, bemoaing the introduction of the fast-moving engine-powered barges. The first line is “I’ve got an old mule and her name is Sal”.

13. ___ Vegas : LAS
Back in the 1800s, the Las Vegas Valley was given its name from the extensive meadows (“las vegas” is Spanish for “the meadows”) present in the area courtesy of the artesian wells drilled by local farmers. Las Vegas was incorporated as a city in 1905, in the days when it was a stopping-off point for pioneers travelling west. It eventually became a railroad town, although with the coming of the railroad growth halted as travelers began to bypass Las Vegas. The city’s tourism industry took off in 1935 with the completion of the nearby Hoover Dam, which is still a popular attraction. Then gambling was legalized, and things really started to move. Vegas was picked, largely by celebrated figures in “the mob”, as a convenient location across the California/Nevada state line that could service the vast population of Los Angeles. As a result, Las Vegas is the most populous US city founded in the 20th century (Chicago is the most populous city founded in the 19th century, just in case you were wondering).

14. CBS forensic drama : CSI
I’m told that the TV show “CSI” gets a lot of razzing by law enforcement professionals for its unrealistic portrayal of the procedures and science of criminal investigation. I don’t care though, as I just think it’s fun television. The original “CSI” set in Las Vegas seems to have “gone off the boil”, but the addition of Sela Ward to the cast of “CSI: NY” has really, really raised the level of the sister show centered around New York City.

18. One of seven in the Constitution : ARTICLE
The US Constitution is composed of a preamble, seven articles and twenty-seven amendments (to date).

28. “If I Only ___ Brain” : HAD A
“If I Only Had a Brain” is a song from the 1939 film “The Wizard of Oz”. The song is sung three times in the movie, each time with different lyrics. It is sung first by the Scarecrow, then the Cowardly Lion and finally by the Tin Man. The other versions of the song are, “If I Only Had the Nerve” and “If I Only Had a Heart”.

31. Drink at a sushi bar : SAKE
We refer to the Japanese alcoholic beverage made from rice as “sake”. We’ve gotten things a bit mixed up in the West. “Sake” is actually the word that the Japanese use for all alcoholic drinks. What we known as sake, we sometimes refer to as “rice wine”. It is indeed made from rice, but it is a brewed rather than fermented, so is more like a beer than a wine.

36. ___ Moines, Iowa : DES
The city of Des Moines, the capital of Iowa, takes its name from the Des Moines River. The river in turn takes its name from the French “Riviere des Moines” meaning “River of the Monks”. It looks like there isn’t any “monkish” connection to the city’s name per se. “Des Moines” was just the name given by French traders who corrupted “Moingona”, the name of a group of Illinois Native Americans who lived by the river. However, others do contend that French Trappist monks, who lived a full 200 miles from the river, somehow influenced the name.

43. Old dagger : SNEE
“Snick or snee” is the name given to cut and thrust while fighting with a knife. The phrase is rooted in a pair of Dutch words and it gave its name to a “snee”, a light sword-like knife.

44. Tramp’s partner in a Disney film : LADY
“Lady and the Tramp” is a classic animated feature from Walt Disney, released in 1955. Who can forget the scene where the Tramp and Lady are “on a date” and eat that one strand of spaghetti? So cute!

47. Border collie, for one : SHEEPDOG
The Border Collie is a breed of lovely-looking herding dogs that originated in the British Isles. The breed probably originated in the border areas between Scotland and England, hence the name.

51. Milton ___, leader to Uganda’s independence : OBOTE
Milton Obote was the political leader who led Uganda to independence from British colonial rule in 1962. Oboto served as Prime Minister and then President of the country, until he was overthrown by Idi Amin in 1971.

56. Capital of Arizona : PHOENIX
Phoenix is the capital of the state of Arizona. The city started out as a farming community founded by a Civil War veteran. Key to the success of the community was the construction of canals that were really contemporary improvements to canals that had previously been built by the local Hohokam people.

59. Writer Fleming : IAN
Ian Fleming is most famous of course for writing the “James Bond” series of spy novels. You might also know that he wrote the children’s story “Chitty Chitty Bang Bang”, which was made into a cute movie released in 1968 and even a stage musical that opened in 2002.

62. Science guy Bill : NYE
That would be “Bill Nye the Science Guy”. Bill’s show ran on Disney for 4 years from 1993-97. I was surprised to learn that Bill Nye was married briefly to Blair Tindall, the author of “Mozart in the Jungle”

Down
1. *Smooth : FLAT (flatlines)
“Flatlining” is an informal term, one meaning that a person is right at the point of death as shown by the flat lines on medical monitors hooked up to a patient.

8. D-Day transports: Abbr. : LSTS
LST stands for Landing Ship, Tank. LSTs were the large vessels used mainly in WWII that had doors at either ends through which tanks and other vehicles could roll off and onto beaches. The design concept persists to this day in the huge fleet of commercial roll-on/roll-off car ferries, all inspired by the LST.

17. Election day: Abbr. : TUES
Election Day was chosen by Congress back in 1845. The month of November was selected as it suited an agricultural society, following the fall harvest and yet not too far into winter, which could make travel difficult. Tuesday was chosen so that people had time to travel to polling stations. Monday elections might have meant that some would have to start out on Sunday, and that could interfere with Christian services.

39. U.S. soldiers : GIS
The initials “G.I.” stand for “Government Issue” and not “General Infantry” as is often believed. GI was first used in the military to denote equipment made from Galvanized Iron and during WWI, incoming German shells were nicknamed “GI cans”. Soon after, the term GI came to be associated with “Government Issue” and eventually became an adjective to describe anything associated with the Army.

42. *Fanny : BOTTOM (bottom lines)
You have to be careful using the slang term “fanny” if traveling in the British Isles. In the US “fanny” is a slang term for a person’s bottom, but on the other side of the Atlantic it has a much ruder meaning …

45. *Cuban drum : CONGA (conga lines)
The type of drum called a conga is more properly known as a tumbadora. The conga is regarded as a Cuban instrument today, but it probably derived from older African drums made from hollowed logs.

47. Winter hazard : SLEET
Apparently “sleet” is a term used to describe two weather conditions. One is a shower of ice pellets, smaller than hail, and the second is a mixture of rain and snow, with the snow melting as it falls. It’s the second definition that I have always used …

48. Blackmore’s “Lorna ___” : DOONE
The novel “Lorna Doone” was written by Richard Doddridge Blackmore. R. D. Blackmore was an English novelist, very celebrated and in demand in his day (the late 1800s). His romantic story “Lorna Doone” was by no means a personal favorite of his, and yet it is the only one of his works still in print.

55. Way of the East : TAO
The Chinese character “tao” translates as “path”, but the concept of Tao signifies the true nature of the world.