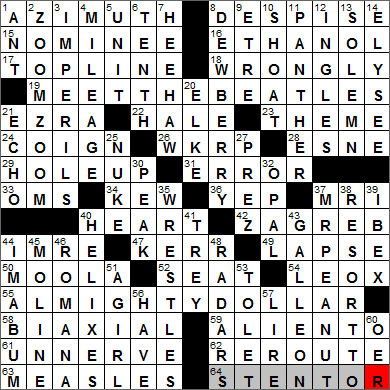 Today’s Wiki-est, Amazonian Googlies
Across
16. Hand sanitizer ingredient : ETHANOL
Ethyl alcohol is more usually known as ethanol. Ethanol is the alcohol found in intoxicating beverages, and nowadays is also used as a fuel for cars. It is also found in medical wipes and hand sanitizer, in which it acts as an antiseptic.

19. 1964 album that was #1 for 11 weeks : MEET THE BEATLES!
The cover of the 1964 album “Meet the Beatles!” describes itself as the “first” album the group released in the US. In fact, the first Beatles album was “Introducing… The Beatles”, which was released a few months earlier.

22. Sound : HALE
“Hale” is an adjective meaning “healthy”. Both the words “hale” and “healthy” derive from the the Old English “hal” meaning healthy.

26. Johnny Fever’s station : WKRP
Johnny Fever is a wild and wacky disk jockey in the sitcom “WKRP in Cincinnati”. Fever is played by Howard Hesseman, and the character was actually inspired by a real-life DJ from Atlanta, Skinny Bobby Harper.

28. Old laborer : ESNE
“Esne” is an uncommon word, a synonym for “serf” as best I can tell, a member of the lowest feudal class.

33. Yogi’s sounds : OMS
“Om” is a sacred mystic word from the Hindu tradition. “Om” is sometimes used as a mantra, a focus for the mind in meditation.

34. London’s ___ Palace : KEW
Kew Palace is a Royal Palace located in Kew Gardens on the Thames near London.

Kew Gardens is a beautiful location in southwest London, also known as the Royal Botanic Gardens. Kew Gardens has the world’s largest collection of living plants.

37. 3-D picture producer : MRI
A CT (or “CAT”) scan produces (via computer manipulation) a three dimensional image of the inside of an object, usually the human body. It does so by taking a series of two dimensional x-ray images while rotating the camera around the patient. The issue with CT scans is that they use x-rays, and high doses of radiation can be harmful causing damage that is cumulative over time. An MRI on the other hand (Magnetic Resonance Imaging), uses powerful magnetic fields to generate its images so there is no exposure to ionizing radiation (such as X-rays). We used MRI equipment in our chemistry labs at school, way back in the days when the technology was still called Nuclear Magnetic Resonance Imaging (NMRI). Apparently the marketing folks didn’t like the term “nuclear” because of its association with atomic bombs, so now it’s just called MRI.

42. Capital on the Sava River : ZAGREB
Zagreb is the capital city of the European Republic of Croatia. Zagreb became the capital of Croatia after the dissolution of Yugoslavia.

44. 2002 Literature Nobelist Kertész : IMRE
Imre Kertész is a Hungarian author. Kertész is of Jewish descent and is a survivor of the Auschwitz and Buchenwald concentration camps. He won the Nobel Prize in Literature in 2002.

47. Michael Jordan teammate Steve : KERR
Steve Kerr is a retired NBA basketball player, and is now the General Manager of the Phoenix Suns. Kerr was born in Beirut, Lebanon, the son of an American academic who specialized in Middle East studies. Kerr’s father was assassinated by militant nationalists in Beirut when Steve was 19 years old.

54. Religious leader with a pet elephant : LEO X
Pope Leo X is remembered as the last pope who was not a priest before taking office. Leo X was also known for granting indulgences to those willing to donate funds for the reconstruction of St. Peter’s Basilica, a practice that contributed to the revolt against the church by Martin Luther. As a result of the revolt, Leo X excommunicated Luther. Pope Leo X led a very comfortable lifestyle, and even owned a pet white elephant that he called Hanno.

55. Jack regarded as an object of devotion : ALMIGHTY DOLLAR
“Jack” is a slang term for money.

58. Like orthorhombic crystals : BIAXIAL
Apparently an orthorhombic lattice is a cubic lattice that has been stretched along two sides, giving a rectangular prism shape.

63. What might be treated with vitamin A megadoses : MEASLES
Measles is a viral infection of the respiratory system. Apparently there is no really effective treatment of measles, although there is some evidence that high doses of vitamin A can reduce the chances of mortality in the very young.

64. One with a booming voice : STENTOR
Stentor was a figure in Greek mythology, a Greek herald during the Trojan War. He was noted for having a powerful voice, so today we describe someone with such a characteristic as “stentorian”. The original Stentor supposedly died after being defeated by Hermes in a shouting contest.

Down
2. Car ad catchphrase : ZOOM-ZOOM
“Zoom-zoom” is a catchphrase use by the automaker Mazda. Mazda is based in the Hiroshima Prefecture in Japan. The ballpark where the Hiroshima baseball team play was for many years known as the MAZDA Zoom-Zoom Stadium.

6. Like the Mets in every season from 1962 to 1965 : TENTH
The New York Mets baseball team was founded in 1962, a replacement for two teams that the city had lost, namely the Brooklyn Dodgers and the New York Giants. For several years the Mets played very poorly, finishing no better than second-to-last in their division. Then of course along came the “Miracle Mets” who beat the Baltimore Orioles in 1969 to claim the World Series in a huge upset.

8. Bramble with edible purple fruit : DEWBERRY
Dewberries are trailing brambles related to blackberries. The dewberries fruit is soft when ripe, and tends to stain the fingers as it is picked. The stems are also covered with fine spines, so picking is often a frustrating and “fruitless” endeavour!

10. Sty youngster : SHOAT
“Shoat” is a name given to a young hog, after it has been weaned.

11. Apple product before Tiger : PANTHER
Apple introduced the Mac OS X Operating System in 2000. Each version of this operating system has had a code name, and that code name is always a type of big cat. The versions and code names are:

Interestingly, the earlier beta version was called Kodiak, after the bear, and not a cat at all.

The Republican Guard in France is part of the Gendarmerie. Tourists visiting Paris will be familiar with the Republican Guard as one of the duties of the force is to protect important buildings in the capital, such as the Élysée Palace.

20. Sommer of Hollywood : ELKE
Elke Sommer is a German-born actress who was at the height of her success on the silver screen in the sixties. Sommer won a Golden Globe as Most Promising Newcomer Actress for her role opposite Paul Newman in 1964’s “The Prize”. She also sings and has released several albums. Now Sommer focuses on painting, producing artwork that is strongly influenced by the work of Marc Chagall.

32. Australian export : OPAL
97% of the world’s opals come from Australia, so it’s no surprise perhaps that the opal is the national gemstone of the country. The state of South Australia provides the bulk of the world’s production, about 80%.

37. Mascot since 1916 : MR PEANUT
Planters is the company with the Mr. Peanut icon. Mr. Peanut was the invention of a first-grader called Antonio Gentile, a young man who won a design contest in 1916. A remarkable achievement, I’d say …

39. Bearded mountain climber : IBEX
Ibex is a common name for various species of mountain goat. “Ibex” is a Latin name that was used for wild goats found in the Alps and Apennines in Europe.

40. Slinkys, e.g. : HELIXES
The marvelous Slinky toy was invented in the early forties by a naval engineer called Richard James. James was developing springs for the navy that could stabilize sensitive instruments in rough seas. One day he accidentally knocked one of his experimental coils off a shelf and watched it “step” onto a stack of books, then onto a table and from there onto the floor where it recoiled itself very neatly. The Slinky was born …

41. Loser in war, usually : TREY
A trey of clubs, for example, is a name for the three of clubs in a deck of cards. The name “trey” can also be used for a domino with three pips.

War is a card game, mainly played by young children.

43. Spanish Main crosser : GALLEON
When one thinks of the word “main” in the context of the sea, the Spanish Main usually comes to mind. Indeed, the use of the more general term “main”, meaning the sea, originates from the more specific “Spanish Main”. “Spanish Main” originally referred to land and not water, as it was the name given to the mainland coast around the Caribbean Sea in the days of Spanish domination of the region.

44. Declaration after “Hallelujah” : I’M A BUM
“Hallelujah, I’m a Bum” is an American folk song. The singer/narrator of the song is supposedly a hobo.

45. Illinois home of the John Deere Pavilion : MOLINE
Moline is a city in Illinois located on the border with Iowa. The biggest employer in town by far is John Deere, which has its headquarters there.

46. Curia ___ (body assisting the pope) : ROMANA
The Roman Curia is the main governing body of the Roman Catholic church. “Roman Curia” translates from Latin as “Court of Rome”, and may be considered as analogous to the cabinet in a Western government.

48. Storm trackers : RADARS
Scientists have been using radio waves to detect the presence of objects since the late 1800s, but it was the demands of WWII that accelerated the practical application of the technology. The British called their system “RDF”, standing for Range and Direction Finding. The system used by the US Navy was called Radio Detection And Ranging, which was shortened to the acronym RADAR.

53. Flat sign : TO LET
“Flat” is a word more commonly used in the British Isles than here. It basically describes an apartment or condominium. The word “flat” is Scottish in origin, in which language it meant a “floor in a house”.

57. Old Italian capital : LIRE
The word “lira” is used in a number of countries for currency. “Lira” comes from the Latin for “pound” and is derived from a British pound sterling, the value of a Troy pound of silver. For example, the lira (plural “lire”) was the official currency of Italy before the country changed over to the euro.