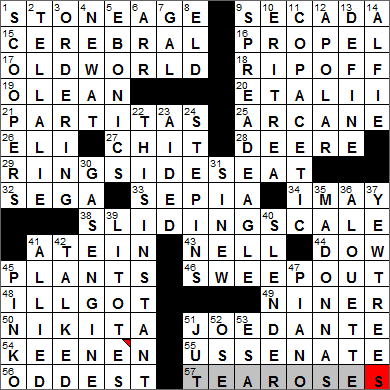 Today’s Wiki-est, Amazonian Googlies
Across
1. Smelting ended it : STONE AGE
Ancient societies can be classified by the “three-age system”, which depends on the prevalence of materials used to make tools. The three ages are:

Metals are found in ore in the form of oxides. In order to get pure metal from the ore, the ore is heated and the metal oxides within are reduced (i.e. the oxygen is removed) in the chemical process known as smelting. The oxygen is extracted by adding a source of carbon or carbon monoxide which uses up the excess oxygen atoms to make carbon dioxide, a waste product of smelting (and of course, a greenhouse gas).

9. Latin pop Grammy winner Jon : SECADA
Jon Secada is a Cuban-American singer/songwriter, born in Havana and raised in Florida. Secada was hired as a background singer by Gloria Estefan in the late eighties, and soon after he started composing for her. It was Gloria Estefan that gave Secada his performing break, offering him solo spots on stage during her performances.

19. Pringles Light ingredient : OLEAN
Olean is a brand name for the fat substitute, Olestra. Naturally occuring fats are made of a glycerol molecule holding together three fatty acids. Olestra is instead made of several fatty acid chains held together by a sucrose molecule. Olestra has a similar taste and consistency as natural fat, but has zero caloric impact as it is too large a molecule to pass through the intestinal wall and passes right out of the body. Personally, I would steer clear of it. Olestra is banned in Britain and Canada due to concerns about side effects, but I guess someone knows the right palms to grease (pun intended!) here in the US, and so it’s in our food.

26. Thornton Wilder, while earning his B.A. : ELI
Eli is the nickname for a graduate of Yale University, a term used in honor of the Yale benefactor Elihu Yale.

27. Debt memo : CHIT
A chit is a note or a short letter. The term tends to be used these days in the sense of an amount owed (as in a poker game). The word used to be “chitty”, which is now obsolete but closer to the original Hindi term. I feel a tad obsolete myself because when we are at school we would be excused class if we had a “chitty”.

28. Mower handle? : DEERE
John Deere invented the first commercially successful steel plow in 1837. Prior to Deere’s invention, farmers used an iron or wooden plow that constantly had to be cleaned as rich soil stuck to its surfaces. The cast-steel plow was revolutionary as its smooth sides solved the problem of “stickiness”.

32. Knuckles the Echidna’s company : SEGA
Sega is a Japanese video game company headquartered in Tokyo. Sega actually started out 1940 in the US as Standard Games and was located in Honolulu, Hawaii. The owners moved the operation to Tokyo in 1951 and renamed the company to Service Games. The name “Sega” is a combination of the first two letters of the words “Se-rvice” and “Ga-mes”.

Knuckles the Echidna is a character appearing in the “Sonic the Hedgehog” series of video games produced by Sega.

33. Crayola color introduced in 1958 : SEPIA
Sepia is that lovely rich, brown-grey color so common in old photographs. “Sepia” is the Latinized version of the Greek word for cuttlefish, as sepia pigment is derived from the ink sac of the cuttlefish.The “sepia tone” of old photographs is not the result of deterioration over time. Rather, it is the result of a deliberate preservation process which converts the metallic silver in the photographic image to a more stable silver sulfide. Prints that have been sepia-toned can last in excess of 150 years.

43. Nagg’s wife in Samuel Beckett’s “Endgame” : NELL
“Endgame” is a 1957 play written by Irishman Samuel Beckett. Beckett actually wrote “Endgame” in French (naming it “Fin de Partie”), and translated it himself into English.

An Irishman I may be, but I have sat through so many Samuel Beckett plays (the Irish dramatist) and have yet to come away feeling satisfied that I spent my time well. Of course I am in the minority, as his play “Waiting for Godot” was once voted the most significant English language play of the 20th century. Maybe I will try again one day …

45. They have their own kingdom : PLANTS
Biological classification is a method used to group organisms by biological type. The method uses a hierarchy of nested classes, with an organism being classified with reference to evolutionary traits. The major taxonomic ranks used are:

49. What Montana was in the ’80s : NINER
Joe Montana played most of his NFL career with the San Francisco 49ers, and the last two seasons with the Kansas City Chiefs. With the 49ers, Montana went to the Super Bowl four times, winning every time. In retirement one of his activities is to produce wine, so keep an eye out for his “Montagia” label.

50. CW series based on a French film : NIKITA
“La Femme Nikita” is a Canadian action/drama series based on the film “Nikita” that was written and directed by Luc Besson.

“Piranha” is a 1978 film that is somewhat of a parody of the 1975 hit “Jaws”. The storyline mainly involves a bunch of killer piranhas attacking people.

54. One of the Wayans brothers : KEENEN
The Wayans family is known as the First Family of Entertainment as it is replete with actors, directors, screenwriters and comedians. I hate to admit it, but I don’t think I know any of them!

55. Wicker seat place? : US SENATE
Roger Wicker is the junior US Senator from Mississippi. Wicker was appointed to the Senate by the Mississippi Governor when Senator Trent Lott resigned his post to become a lobbyist.

57. Blooms named for their scent : TEA ROSES
The first tea roses were so called because they had a fragrance reminiscent of Chinese black tea.

Down
5. Controversial school language subject : EBONICS
The term “Ebonics” refers to vernacular English used by African Americans. “Ebonics” is a blend of the words “ebony” and “phonics”. It is not a term that is embraced universally.

10. 1890-1941 Italian colony : ERITREA
Eritrea is a country located in the Horn of Africa, surrounded by Sudan, Ethiopia, Djibouti and the Red Sea. Some scientists believe that the area now known as Eritrea was the departure point for the anatomically modern humans who first left Africa to populate the rest of the world.

12. Like hydra neurons : APOLAR
Hydra are small multicellular animals found in freshwater. Hydra have tubular bodies with a mouth at one end surrounded by several tentacles that are used to catch prey.

35. Paintings often including an infant : MADONNAS
A Madonna is an artistic representation of Mary, mother of Jesus, one that often includes both mother and child.

36. Kindergarten song : ALOUETTE
The French-Canadian children’s song starts with, “Alouette, gentille alouette …” “Alouette” is the French word for a bird, the “lark”. The song is actually pretty gruesome, even though it was used to teach children the names of body parts. The origin of the song lies in the French colonists penchant for eating larks, which they considered to be game birds. So in the song, the singer tells the lark that he/she will pluck off one-by-one the lark’s head, nose, eyes, wings and tail.

37. Some graveyard flora : YEW TREES
Yew trees were placed around churches and in graveyards all over Europe. The reason for the practice seems to be unclear, but one suggestion is that fronds from yew trees were used as substitutes for palms on Palm Sunday.

39. Figure of speech like “not unlike” : LITOTES
Litotes is a figure of speech that is an understatement, one that uses a particular adjective, but negates it. For example “not the brightest bulb” and “not a bad day’s work”.

45. McCarthy-era epithet : PINKO
The term “pinko” came to us courtesy of “Time” magazine, in 1925. Back then “pinko” was used to describe those who were politically left of center. Red was the color associated with the left going back to the 1800s (how times have changed!), and “pink” was assigned to people who were not aligned with the left politically, but had left-leaning tendencies.

After WWII the United States went through what was called “Second Red Scare”, the fear of communist infiltration in American society and government. Senator Joseph McCarthy became a lightning rod for this movement when he chaired Senate hearings in the fifties designed to root out communist infiltrators.

47. Source of grand sounds? : PIANO
What was remarkable about the piano when it was invented, compared to other keyboard instruments, was that notes could be played with varying degrees of loudness. This is accomplished by pressing the keys lightly or firmly. Because of this quality, the new instrument was called a “pianoforte”, with “piano” and “forte” meaning “soft” and “loud” in Italian. We tend to shorten the name these days to just “piano”.