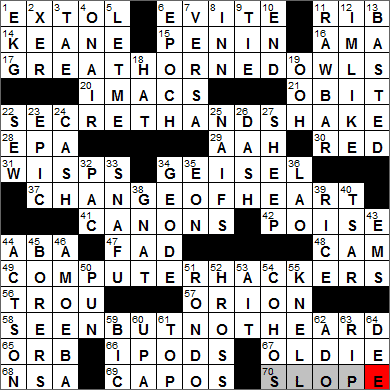 CROSSWORD SETTER: Daniel Kantor
THEME: Change of Heart … four of today’s five themed answers include an anagram of the word HEART, with CHANGE OF HEART being the fifth themed answer:

Today’s Wiki-est, Amazonian Googlies
Across
11. Josh : RIB
“To rib”, meaning “to tease”, is a term dating back to 1930 and is probably an extension from “poking someone in the ribs”.

14. “The Family Circus” cartoonist : KEANE
Bil Keane is a cartoonist most associated with his strip “The Family Circus”. Once Bil sketches out the text and idea for the cartoon, he sends it off to his son Jeff Keane who inks and colors the pictures so that the strip is ready for publication. In the storyline itself, the main characters are based on Bil’s own family. In fact, the son “Jeffy” in the story is based on Jeff, Bil’s son and production assistant.

15. Corral : PEN IN
“Corral” is the Spanish word for an enclosure for livestock, and is a word we’ve imported into English. Ultimately, the term comes from the Vulgar Latin “currale” meaning “enclosure for carts”, itself coming from “currus”, the Latin for “cart”.

16. Surgeon’s org. : AMA
The American Medical Association (AMA) was founded in 1847 at the Academy of Natural Sciences in Philadelphia. The first female member was allowed to join the AMA in 1868, but the first African American members weren’t admitted until one hundred years later, in 1968.

17. Yellow-eyed birds of prey : G(REAT H)ORNED OWLS
The Great Horned Owl is a large owl that is native to North and South America. Also called the Tiger Owl, it is the most common true owl in the region.

20. Apple products since 1998 : IMACS
The iMac is a desktop computer platform from Apple introduced in 1998. One of the main features of the iMac is an “all-in-one” design, with the computer console and monitor integrated.

21. Solemn column : OBIT
“Obituary” comes from the Latin “obituaris”, originally the record of the death of a person, although the literal meaning is “pertaining to death”.

28. energystar.gov grp. : EPA
The Energy Star standard was created by the Environmental Protection Agency during the Clinton Administration. In general, an item marked with an Energy Star uses 20-30% less energy than that mandated by federal standards. We just put an Energy Star roof on our house, and I am looking forward to seeing if the home stays cooler this summer.

30. Spectrum start : RED
The number of colors in the visible spectrum is actually infinite because the spectrum is a continuum. However, the human eye can distinguish about 100 different colors in all. The brain tends to divide the rainbow of colors into a smaller number, seven so-called primary colors:

34. Dr. Seuss’s surname : GEISEL
Dr. Seuss was the pen name of Theodor Seuss Geisel. Geisel was commander of the Animation Department of the USAF during WWII. He was behind many propaganda films including one called “Our Job in Japan”. Even though the film was produced specifically as propaganda, this same movie was used after the war as a basis for the short feature “Design for Death”, a study of Japanese culture released in 1947 and winner of an Oscar for best Documentary.

44. Counselors’ org. : ABA
The American Bar Association (ABA) was founded back in 1878 and is a voluntary association for lawyers and law students. The ABA focuses on setting academic standards for law schools and setting ethical codes for the profession.

57. Hunter in the night sky : ORION
The very recognizable constellation of Orion is of course named after the Greek God Orion, the Hunter. If you take a look at the star in Orion’s “right shoulder”, the second brightest star in the constellation, you might notice that it is quite red in color. This is the famous star called Betelgeuse, a red supergiant, a huge star that is on its way out. Betelgeuse is expected to explode into a supernova within the next thousand years or so. You don’t want to miss that …

66. Apple products since 2001 : IPODS
The iPod is Apple’s signature line of portable media players. The iPod first hit the market in 2001 with a hard drive-based device, now known as the iPod Classic. Later models all use flash memory, allowing a smaller form factor. The smallest of the flash-based models is the iPod Shuffle, which was introduced in 2005.

68. Code-cracking org. : NSA
The National Security Agency (NSA) was set up in 1952 by President Truman, a replacement for the Armed Forces Security Agency that had existed in the Department of Defense since 1949. The NSA has always been clouded in secrecy and even the 1952 letter from President Truman that established the agency was kept under wraps from the public for over a generation. I really like the organization’s nickname … “No Such Agency”.

69. Guitar accessories : CAPOS
A capo is a clamp-like device that is placed around the neck of a guitar to shorten the strings, and hence raise the pitch. The full name, rarely used these days, is “capo tasto”, which is Italian for “head tie”.

70. Place to schuss : SLOPE
A schuss is a very fast run downhill, not taking any turns to slow the pace of the descent. “Schuss” is a German word for “shot”.

Down
1. Hosp. readout : EKG
An EKG measures electrical activity in the heart. Back in my homeland of Ireland, an EKG is known as an ECG (for electrocardiogram). We use the German name in the US, Elektrokardiogramm, giving us EKG. Apparently the abbreviation EKG is preferred as ECG might be confused (if poorly handwritten, I guess) with EEG, the abbreviation for an electroencephalogram.

2. Gen ___ : XER
The term Generation X originated in the UK where it was the name of a book by Jane Deverson. Her book detailed the results of a study of British youths in 1964, contrasting their lifestyle to those of previous generations. It was Canadian author Douglas Coupland who was responsible for popularizing the term, with his more successful publication “Generation X: Tales for an Accelerated Culture”. By the latest accepted definition, Gen-Xers were born between 1961 and 1981.

3. ___ Bo (exercise system) : TAE
Tae Bo isn’t an ancient martial art, and rather was developed as a form of aerobic exercise in the 1990s. The discipline was introduced by taekwondo expert Billy Blanks who gave it the name Tae Bo, a melding of “taekwondo” and “boxing”.

6. Geologic span : EPOCH
Geologic time is divided into different units which are, starting with the longest:

7. Vice ___ : VERSA
“Vice versa” is a Latin phrase meaning “with position turned”. We always pronounce this term “incorrectly”. In Latin, a “c” is always a hard sound, and a “v” is pronounced like a “w”. The pronunciation should be something like “wee-kay wehr-sa”.

25. Unworldly ones : NAIFS
A naïf is someone who is naive, as “naïf” is the French word for “naive”.

26. Gauge site, for short : DASH
Back in the 1800s, “dashboard” was the name given to a “board” placed at the front of a carriage to stop mud from “dashing” against the passengers in the carriage, mud that was kicked up by the hoofs of the horses. Quite interesting …

32. Pre-election ad buyer, maybe : PAC
A Political Action Committee (PAC) is a private group that works to influence the outcome of a particular election or group of elections. Any group becomes a PAC by law when it receives or spends more than $1,000 for the purpose of influencing the outcome of an election.

33. Chaotic situation : SNAFU
SNAFU is an acronym standing for Situation Normal: All Fouled Up (well, that’s the “polite” version!). As you might imagine, the term developed in the US Army, during WWII.

34. Crystal-filled rock : GEODE
A geode is a rock in which there is a cavity lined or filled with crystal formations.

36. Southeast Asian tongue : LAO
Lao, the language of Laos, does not use spaces between words (or periods!), although this is apparently changing. Spaces are used between sentences and clauses.

38. Swarming annoyance : GNAT
Gnats are attracted to the smell of rotting food, and to vinegar. Simple homemade traps that use vinegar are often constructed to attract and kill gnats.

39. Major Thai export : RICE
A paddy field is the flooded piece of land used to grow rice. The water reduces competition from weeds allowing the rice to thrive. The word “paddy” has nothing to do with us Irish folk, and is an anglicized version of the word “padi”, the Malay name for the rice plant.

40. Late 19th-century anarchist’s foe : TSAR
By definition, an anarchist is someone who feels that government is oppressive and should be gotten rid of. Anarchists stood side-by-side with the Bolsheviks in the February Revolution of 1917 that led to the abdication of Tsar Nicholas II and the end of the Russian Empire.

Our word “ambulance” originated in the French term “hôpital ambulant” meaning field hospital (literally “walking hospital”). In the 1850s, the term started to be used for a vehicle transporting the wounded from the battlefield, leading to our “ambulance”.

46. Simple creature : AMOEBA
An ameba (or “amoeba” as we spell it back in Ireland) is a single-celled microorganism. The name comes from the Greek “amoibe”, meaning change. The name is quite apt, as the cell changes shape readily as the ameba moves, eats and reproduces.

50. Wordplay from Groucho : PUN
Groucho Marx’s real name was Julius Henry Marx. By the time Groucho started his successful, post-Hollywood career hosting the quiz show “You Bet Your Life”, he was sporting a real mustache. For all his movies, his mustache had been painted on with greasepaint.

51. Sonata finale, often : RONDO
A rondo was often chosen by composers in the classical period for the last movement of a sonata (or symphony or concerto, for that matter). In rondo form there is a principal theme that alternates with a contrasting theme(s). So, the original theme anchors the whole piece in between secondary digressions.

52. ___ Perot : H ROSS
Henry Ross Perot graduated from the US Naval Academy in 1953, as president of his class. Ross Perot served his 4-year commitment but then resigned his commission, apparently having become somewhat disillusioned with the navy.

53. River islet : AIT
Aits are little islands found in a river. Aits aren’t formed by erosion, but by the deposition of silt over time. As a result, aits often have a long and narrow shape running parallel to the banks as the sediment builds up with the flow of the water. Many of the islands in the River Thames in England have been given the name “Ait”, like Raven’s Ait in Kingston-upon-Thames, and Lot’s Ait in Brentford.

54. Some Pacific salmon : COHOS
The Coho salmon is silver along the side of its body, but only during the phase of its life while it is in the ocean. When spawning and heading up into a freshwater river, the Coho has bright red sides.

55. Belfry sound : KNELL
The word “knell” is used for a solemn ring from a bell, often associated with death or a funeral. “Knell” comes the Old English “cnell” and is probably imitative in origin, sounding like a peal from a large bell.

59. Razor brand : BIC
Société Bic is a French company, based in Clichy in France. The first product the company produced, more than fifty years ago, was the Bic Cristal ballpoint pen that is still produced today. Bic also makes other disposable products such as lighters and razors.